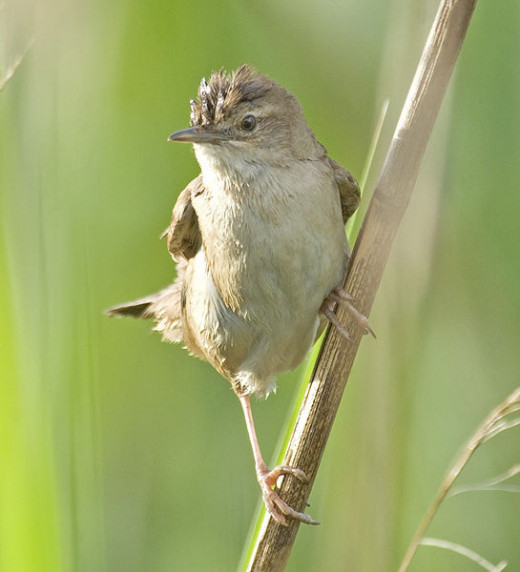 Savi's Warbler belongs to the Passeriformes {perching birds} order of birds and placed in the family Locustellidae and given the scientific name of Locustella luscinioides. Locustella means little Grasshopper, and the species name of luscinioides means like a Nightingale. It is named after Paolo Savi an Italian ornithologist.

In this article we look at the history of the bird through the writings of past ornithologists. We look at the lifestyle breeding and distribution. as always the most apt place to commence is with a description of our subject. 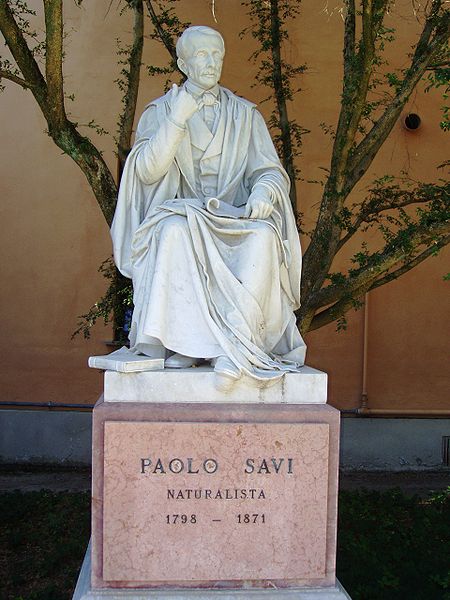 The general colour of the Savi's Warbler is the upper parts are uniform russet brown, slightly darker on the quills, and somewhat paler on the outside web of the second primary. The under parts are of a pale buff-brown colour, shading to nearly white on the throat, and the center of the belly; The under tail coverts are pale chestnut, with obscure paler tips.

the bill is dark brown above, pale horn colour below. The legs and feet and claws are pale brown. The irides are hazel. the sexes are very similar in colour and even after the autumn moult the colouring tends to stay the same. The Savi's warbler may be distinguished from its near ally L. flutivatillis by its russet brown upper parts { which in that species is olive brown}, and by the absence of the striation on the breast so conspicuous in the latter species.

The length of this warbler is 14cm with a wing span of 20cm. Both male and female weigh 18g.

In Britain the bird is on the Red List of Conservation Concern making it a Priority Conservation species. Here it is a rare Migrant breeder, lucinioides is one of three subspecies in the world. The European population is estimated to be 480,700 pairs

It is widespread but has a patchy breeding range in Europe which constitutes 50% of the global breeding range. Key populations in Romania are stable, in other countries there have been declines in population numbers but overall the status of the Savi's warbler in Europe is secure.

They winter in tropical Africa and locally in Eurasia.

According to Dresser 1870, the bird was a relatively little known warbler with a tolerably restricted range, being found in North Western, East Central and Southern Europe, during the summer season and it both bred and wintered in North Africa.

In great Britain it was only known to have occurred in the Fen Countries of Eastern England and according to Dresser, 'ere this doubtless quite distinct, for most of the Fens have been drained off and brought under cultivation'.

The first specimen to be detailed was a British killed bird, obtained by Mr. Stevenson says, by the Late Rev. James Brown at Limpenhoe in Norfolk {East Anglia England}, in the early 1800s, during the month of May. This specimen was submitted to the inspection of Temminck, when he was visiting London in 1889, and he conveyed it with him to Europe to compare with other specimens in his collection. At that time Temminck pronounced it to be a variety of Reed Warbler and later seems to have mistaken it with the Cetti's warbler. Savi, himself did not describe the species until about five years later, but it was still relatively unknown until Temminck published his Manual of Ornithology in 1835.

Many examples of Savi's warbler, as well as the nest and eggs of this bird, were obtained at various dates from 1843-1856 in the Fens of Norfolk and Cambridge, and in one or two adjoining counties. it was not known at that time whether the species had occurred in any other district of the British Isles.{ even to this day it only occurs in East Anglia and the numbers are quite small}

On the Continent of Europe during the 1800's the distribution of the species was regarded as having a somewhat restricted distribution, though in many localities it was a common bird. It was never encountered only in reed beds. However, where reed beds occur in abundance in countries such as Spain, the south of France, Holland, Italy Austria and south Russia, it was found. it was, also during that period, recorded as being equally common in suitable localities in North Africa and specimens have been obtained from Palestine, but it was thought to have been absent from North Europe, and also from Germany, Turkey , Greece, Asia Minor and the Caucasus. In the northern parts of its range it was considered as a strictly migratory bird.

Records shoe that the Savi's warbler bore the same relationship to the Grasshopper warbler that the Reed Warbler did to the Sedge warbler { see my hub Sedge warbler}. According to Seebohm the bird arrived at the reed beds of Galicia during the first week of May. But in the south of Spain it was thought to arrive much earlier, since Col. Irby, was said to have obtained eggs in Andalusia on the fourth of May. he stated , however, that the birds were all gone by September.

Because the bird is so well camouflaged and of a shy disposition they may have been overlooked thus under recorded, once the males had stopped singing

The song of the Savi's warbler is said to be reminiscent of the note of a tree frog.it is a monotonous whirr of trill , like the note of the Grasshopper warbler, and has benn described as more melodious but less powerful than that of the European Grasshopper warbler. It is pitched in a higher key than those birds and sounds further or nearer as the bird turns its head from or towards the listener.

it may be heard at all hours of the day and night, in calm warm weather. However, on cold nights the bird tends to remain silent, and in windy weather it either does not sing at all or the voice is drowned by the rustling of the leaves.

The Savi's warbler is said to be a very quarrelsome bird and defends its territory against rivals and intruders regardless of the danger posed by the threat. They commence the nesting season from May to June depending on the locality/country they occupy.

Graf Casimir Wodzicki, describes its habits in the Journal of Ornithology 1853-" I have often watched this delicate little bird building its nest, and noticed with what trouble it collects the materials. At first both sexes are thus employed, but later the female alone collects the leaves, which the male takes from her beak and arranges without her assistance"

The nest is carefully concealed among the sedge's and is placed upon a heap of tangled blades, usually six inches but sometimes two or three feet above the water. It is composed of flat leaves or broadish grass generally Sweet grass { Glyceria}, carefully woven together and the narrowest leaves chosen for the lining. The deep, compact structure is neatly made. Graf Wodzicki says that--" An inexperienced ornithologist would take it for the nest of a little Crake, so exactly similar it is only smaller" He also stated that both the male and female sit on the nest, and allow themselves to be watched without leaving it, if frightened off they soon return.

During the breeding season Savi's warbler is rarely observed on the wing, but early in the spring it sometimes flies up from the reeds, and dives down again into them with its wings laid back. When it does take to the wing its flight is not undulating but rather with continuous flaps of the wings in the manner of the Wren. It is not known that this species feeds on anything other than insects and their larvae.

The eggs vary in number from four to six. The ground colour is white or pale buff, thickly sprinkled over the entire surface with ash brown spots, most numerous at the larger end of the egg, where they usually form an obscure zone. The pale violet grey underlying spots, giving the eggs an almost a scarcely imperceptible pink appearance in this part.

The eggs of the Savi's warbler somewhat resemble those of the Grasshopper warbler, but are always browner. The eggs of the allied Locustella fluviatillis are at times almost indistinguishable.the eggs are incubated for ten to twelve days by the female and fledging occurs in a further eleven to fifteen days.

UK-Red list-Due to declines in population/distribution of over 50% over the last forty years or so.