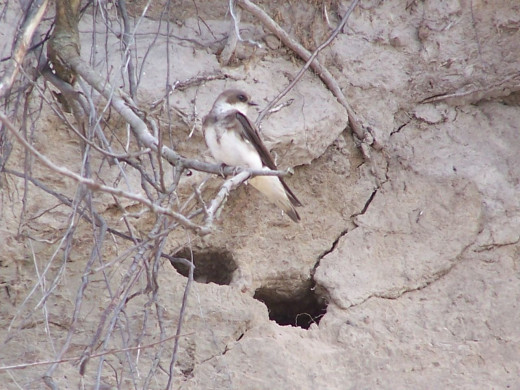 The Sand martin Riparia riparia belongs to the order of birds known as the Passeriformes {perching birds} and the family Hiruninidae within that order. Both the genus ans specific names derive from the Latin riparia =of banks from ripa -a bank.

In the UK they are placed on the Amber list of conservation concern {declines of between 25-50% over the last forty years or so} with a current population estimated at 100,000 nests in summer.In Ireland they are also Amber listed due to European declines. {source BTO }

The Banded martin. A specimen in the Nairobi Museum. 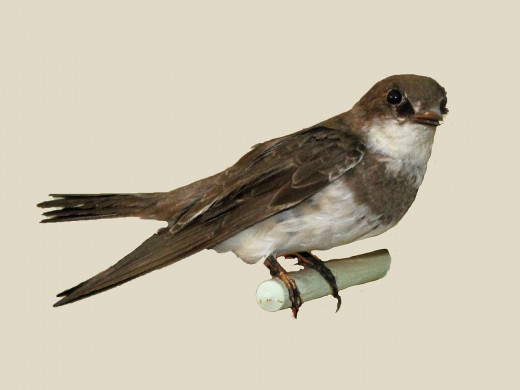 Martins are a group of birds in the Hiruninidae {swallow} family,which are characterized bt their adaption to aerial feeding. The family comprises two sub families the Pseudocheliidoninae { the River martins of the genus Pseudochelidon} which include the African River Martin and the White eyed River Martin which is known from only one site in Thailand and Hiruninidae {all other Swallows and Martins.

They are excellent flyers and use this skill to attract a mate and some nest in colonies and our subject is no exception. Martins are stockier than Swallows and they lack the very long tail feathers {streamers} that are so prominent in their close relatives. They have rather broad based wings which taper to a point and deeply forked tails on a barrel shaped body.

Only the Banded Martin Riparia cincta has a similar shape and colouring as the Sand Martin,however, this species belongs to Africa and the Sand Martin is only present there in winter. Other Martin of the group is the Pale Martin R.diluta which is found in central Europe to eastern China and is sometimes referred to as the Pale Sand Martin.

In the UK and Europe the Sand Martin can be told from the other common Martin The House Martin** by their different colouring the latter being black with a prominent white rump,seen especially in flight.

Here we review the Sand Martin and as always commence with a description of the subject under review. 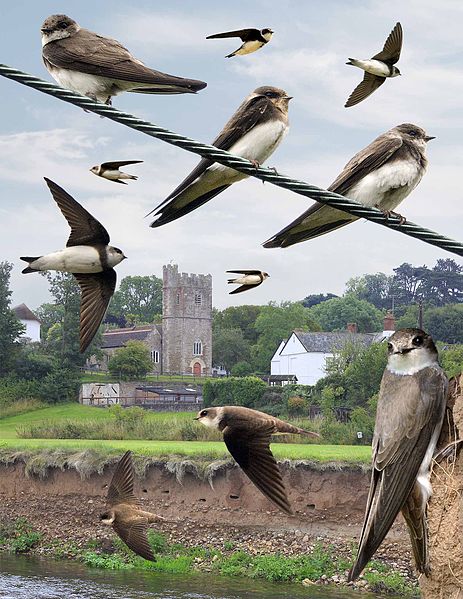 The sand Martin is about four to five inches long. The small bill is dark brown,nearly black. The iris is dark brown. The head,crown,nape and neck are light brown. The chin,throat and breast white. The breast has a band of light brown across it,and a few spots of the same colour just below. The back is light brown.

The legs and toes are scaled and are of a dark reddish brown. The claws dark brown. Just above the hind claw there are a few downy feathers of a buff white colour. The plumage of the female is very similar to that of the male,and in summer the plumage of both birds loses its gloss and becomes much duller.

Like other members of the Swallow family the habit of the Sand Martin is very interesting and its appearance graceful and attractive. The flight of this bird is rapid but it lacks the bold sweeping curves of the Swift and Swallow,and may be described as somewhat wavering and unsteady. Unlike those birds mentioned, it seldom rises to any great height in the air.

It feeds entirely on flying insects,and they are usually taken at low levels. The arrival of this graceful visitor takes place in early spring,as early as March even in some of its moderately northern reaches,and then it can be seen skimming over the surface of ponds,streams.meadows or commons in pursuit of food,or occasionally dipping into the water to freshen its plumage. They stay with us until September or, a few stragglers have been recorded in October.

The habits of the Sand Martin differ in several points from those of the House Martin and Swallows. The comparative rarity of suitable breeding places make it much more local,and causes it to be, as a result, much more gregarious. This is particularly true when breeding.

Sand Martin on the wing. 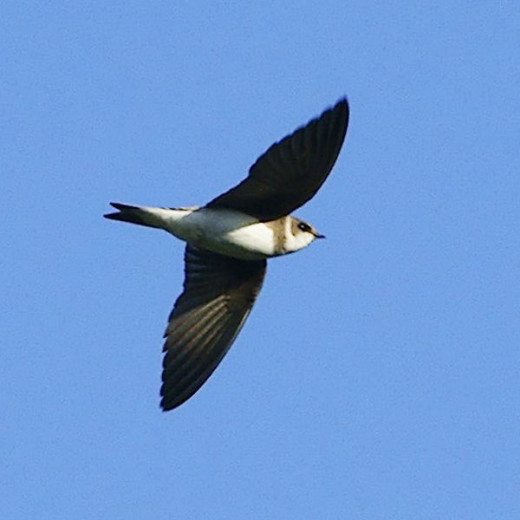 In the days before it became illegal to keep wild birds it was a popular pastime. Bird catchers made a good living from procuring birds by any means, usually by netting. They then sold them to bird keepers and to markets as items of food.

As it was an important part of our avian history and as such it warrants the following few paragraphs. As a cage bird the Sand Martin cannot be commended according to Butler 'British Birds Nest and Eggs' 1898, and he writes " when on a nesting excursion in Kent, in July 1887, a family of five little Sand Martins were brought to me. As the birds were to young to let fly, I determined to try to keep them as pets, but I found the task harder than anticipated to induce them to open their mouths for food. Abraham's Nightingale Mixture,was given to them. However, after nearly a weeks perseverance, my wife and a girl who had assisted in looking after my birds,succeeded in persuading four of them to open their mouths when food was offered."

" All five were then in excellent health, though rather to fat. They were pretty and when sitting on one's finger,looked exactly like diminutive hawks. Unfortunately,although by this time the Martins were well able to fly, they could not be induced to do so if taken into a room where their food was not in sight. In less than a fortnight they could feed themselves,and after that they would eat incessantly,swallowing such mouthfuls of the soft food, that it seemed marvelous where they could store it all away, then they would fall asleep, sitting upon the edge of the food plate and remain in a state of stupor for perhaps half an hour, when they would wake up and begin to gorge again."" Naturally this lifestyle did not suit with birds whose nature is to be incessantly on the move,and who gets their food slowly and in minute morsels. They grew rapidly thinner and weaker,staggered in their walk as if drunken, and dropped off one by one,until, in just three weeks from the time when I received them, the last of them died. Possibly, if it had been practical for me to be at home to attend them, I might have given the birds their food at stated intervals, and compelled them to take exercise. In which case, perhaps, their lives might have been prolonged, but Sand Martins are not suitable birds for the Aviculturist" 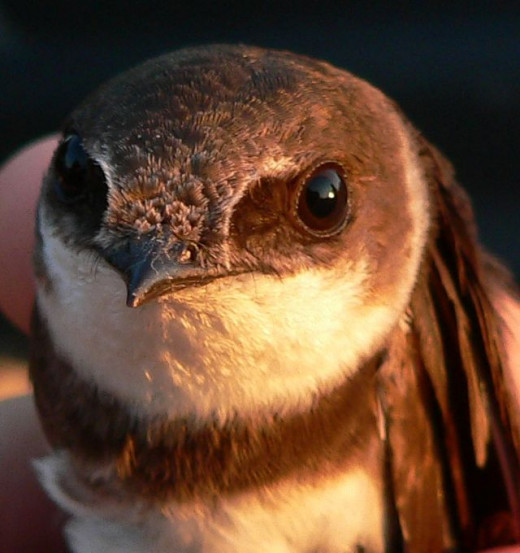 One of the peculiar characteristics of the Swallow family is the ingenuity displayed by them in the construction of their nests,and the sand martin is no exception. Indeed it takes its common name from the locality selected for its breeding purposes. The patience and tenacity displayed by these graceful birds while preparing their domiciles are well worthy of attention.

The Sand Martin usually builds in high sandy banks,by the sides of rivers, cuttings,Sand pits, or indeed anywhere that the soil and situation suitable for their purpose. they are social little birds and are commonly found to have their nests close together,and in large numbers. These holes are up to a meter long and studies have revealed that they are excavated at a rate of 8 to 10 cm per day.

The Sand martin is a skilled 'workman', and the gallery in which the nest is built is usually excavated in about two weeks,and in most cases the aperture is very nearly circular. The end of the gallery is somewhat larger than the opening and contains the nest. The nest itself is commonly made of a little hay or similar grasses and lined with the soft breast feathers of ducks or geese,loosely put together. These birds are extremely partial to certain localities they return season after season to their old haunts and make use of their old excavations over and over again.

The eggs are deposited by the female and are incubated for 14-15 days by both parents. .They are white in colour and somewhat similar to those of the House Martin but the shell tends to similar and easily fractured. When the chicks hatch both parents tend to their needs for as long as is necessary and they all return to the nest to sleep.

As soon as the young of the first broods can take care of themselves they tend to unite in flocks,and flit all day long over the fields and waters feasting upon the boundless store of insects. these young birds probably never visit the nest again, and roost at night in reed beds, marshy plantations and other suitable situations. They are on the wing from early in the morning and tend to be late returning to the roost at night.

Young birds of the year, before leaving us, have brown feathers on the back and upper tail coverts,also those of the wing coverts and tertial feathers tipped with a buff white. The chin is also a buff white.

Nest with a single egg. 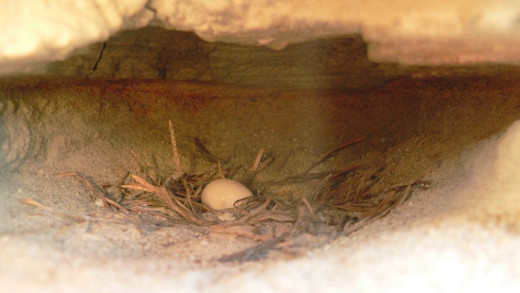