The Rook now and in times gone by

The text on this species is taken from the Book -" A Hand Book To The Birds of Great Britain ",by Richard Bowldler  Sharp. it was published in London in between 1844-1847. The book is now in the public domain. Pages courtesy of the Biodiversity Heritage Library.

The coloured image are my personal choice. {See reuse of images below.},

Although the text gives an historical perception of the bird at that time, the description/habits and nest and eggs are still relevant today.

Image courtesy of Adrian Pingstone  placed in the public domain.

Mr Sharpe states " Distinguished from all other members of the crow family by having the forehead and the sides of face bare, covered by a whitish -grey scabrous skin. This is peculiar  to adult birds only, and is found in both male and female. The bill is more slender and longer than in other British crows."

It was known at this time by the genus name of Trypanocorax but is now placed in the genus Corvus, with the species name of frugilegus.

Mr Sharpe describes the adult birds as follows---" Adult male Black, with a gloss of rich purple on the head and neck; sides of the face has a greenish tint. wing coverts like the back; wings and tail black, with a green or purple gloss; under surface of the body black, with a purple gloss; the throat with a steel-blue gloss; Bill and feet black; Iris dark brown. total length 17 inches; Bill 2.5 inches;wing 12.4 inches; Tail 7.5 inches. "   { Length 45 cm. Wingspan-90 cm  weight 430 grams.} Public domain courtesy of Alexei Savrasov    The rooks have returned. 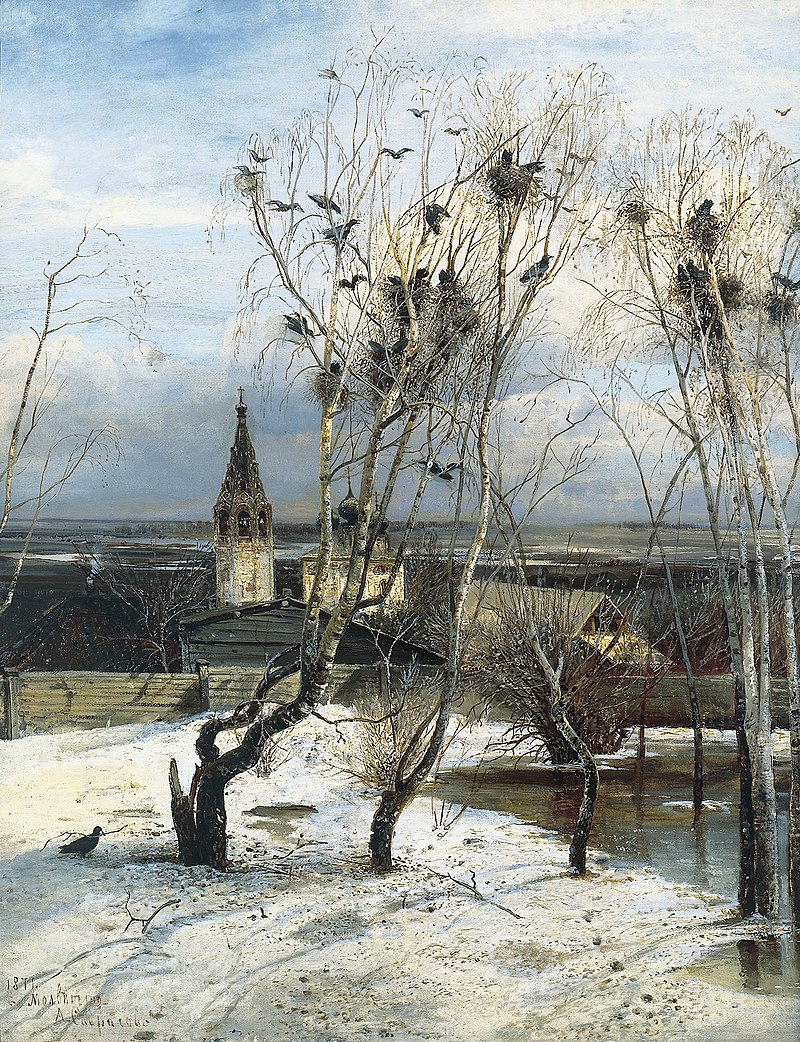 municipality to shoot them down, though one would have fancied the continuous firing of a gun in a public thoroughfare, would prove a greater nuisance  than the " Cawing" of the birds themselves."

Nest--A stout and compact structure composed of turf and twigs , the inside consisting of roots and straws, and the whole nest not being unlike a huge Blackbirds; It is by no means untidy, and is much more neatly finished than could be believed from the ragged appearance which the nest presents in a rookery, when viewed from below.

Eggs.- Three to five in number, the ground colour being green or bluish -green, sometimes nearly white. The markings consist of spots and blotches of greenish- brown , with darker spotting of brownish black.

Egg of the Rook.

The Rook is widespread and common and placed on the Green list of conservation concern. [ No current concerns for this species}