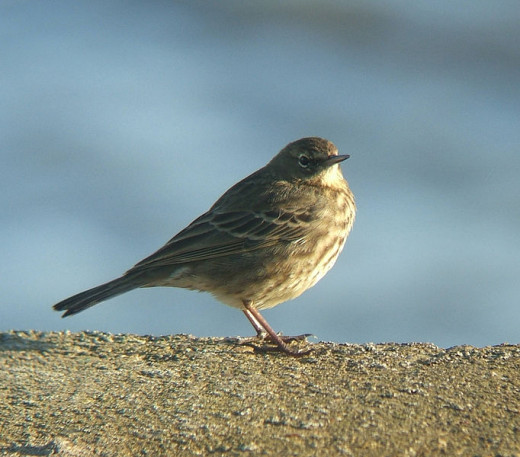 This valued image is courtesy of MPF   CC BY-SA 3.0 license

Rock pipits belong to the Passeriformes {perching birds} order of birds, and placed in the family Motacillidae. They are given the genus name of Anthus ,a small grassland bird described by Aristotle. The specific name of petrosus alludes to rock .In the UK there are an estimated 34,000 pairs in summer and they are placed on the Green list of conservation concern { no current concerns} The European population is stable and there are no conservation concerns.

It breeds in north west Europe and northern Asia, winters south to Morocco. In the UK it is classed as a resident breeder and passage winter visitor.

Here we review the species, its lifestyle and habits. There are historical notes from past ornithologists. As always we start with a description of the species under review.

Although this species possesses a great similarity to the Meadow and Tree pipits, it is somewhat larger and much darker on the throat and breast, while the plumage on the upper parts of the body is more of an olive brown. The bill is a dusky colour, with the upper and lower mandibles being yellowish at the base. The iris is a deep brown. A narrow or whitish or yellowish streak runs over the eye and another beneath the hinder part. However in some birds the upper streak is not easily seen.The base of the bill has a few short bristly feathers.

The head and crown are brown,slightly tinged with olive. The sides of the neck are greenish white streaked with brown, and the back is much the same colouring as the head. The chin and throat are a dull yellowish white, the latter streaked with brown. The breast a dull greenish white with brown streaks and spots,turning lower down into yellowish white with fewer streaks. The sides are olive brown. The tail is relatively longish and extends about an inch and a half beyond the closed wings. It is dusky in colour, and the outside feathers are webbed with white, the central feathers being shorter than the others.

The legs and feet are reddish brown, claws black and curved, especially the hinder one , which is longer than the rest.

The pretty olive tinges of the plumage ,can at some seasons, may give way to a greyish tint. The birds are nearly six and three quarter inches long, the female very slightly less, however, they can not be told apart in the field. In relation to their body size the wings are medium long, the neck short as is the bill. the legs are medium length.On the ground they walk or run. 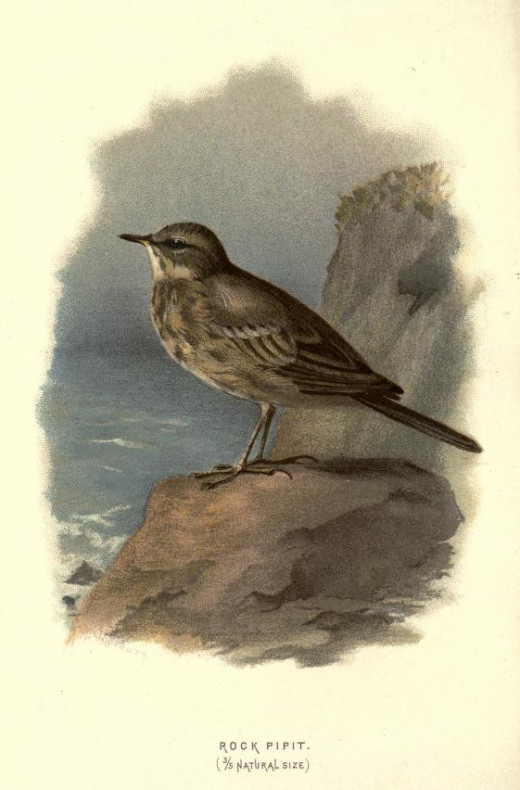 The Rock pipit, Anthus petrosus was formerly known by the Latin names of Anthus aquaticus, and Alauda obscura. It also had a variety of common names attributed to it including Shore pipit, Rock lark Sea titling and Mud lark.

According to Swaysland 1883. The bird was well known in all ,northern parts of Europe, as well as in the more temperate parts. It may even be met with in Greenland and some other districts of the polar regions. It is a thoroughly hardy bird and is additionally interesting, from it being , as Morris describes it ' One of our true aborigine birds'

Its name no doubt derives from its preference for rocky and hilly places, but it is by no means confined to such localities. It may also be encountered on the low, flat, shingly or marshy flats that are now and then covered by the sea, and, in such localities it may be observed diligently seeking out the small marine insects which it delights to eat.

The rock pipit is usually encountered among many of its own species, but they are known to congregate in flocks. When disturbed it rarely flies to any great distance, but rather makes a short flitting flight, a more secure spot in the immediate vicinity, uttering the familiar {to all pipits} an uneasy 'cheep'of alarm. The 'cheep' note repeated several times depending on the circumstances is the usual call which is given more vigorously in the summer months, but the bird can not be,by any stretch of the imagination, referred to as a song bird.

Although not a migratory bird in the true sense of the word, they are certainly given to extensive movements in the UK, for the birds are regularly found in the autumn and winter on many parts of our coasts, from which they had disappeared from during the spring.

It is amusing to watch the motions of this little bird as it runs along the sandy margins, picking out food from the mass of seaweed. It is sprightly and to me seems to display enjoyment in every movement. Flies are expertly taken as they gather around the seaweed in large numbers. It is also amusing to observe the birds when they are feeding along the tide line or on rocks over which the surf is rolling. It frequently wades, running swiftly back before the advancing waves, and as the tide recedes a little, they flit back to feed where they were.

At high tide the bird will choose a resting place among the jumble of rocks, stonewall or embankment. In its habits it is more akin to the true waders than any other 'land bird'. They are closely allied to the Wagtails. Resident birds are joined in winter by birds from Scandinavia.

Macgillivray wrote " It mixes with Meadow pipits and sometimes with Snowflakes and Sky larks. In summer, when masses of seaweed happen to be cast upon the shore, and become putrid, they find among them an abundant supply of larvae, and at all seasons they frequent the ebb, in order to pick up minute shell fish and other marine animals, often mingling with Redshanks and Turnstones. 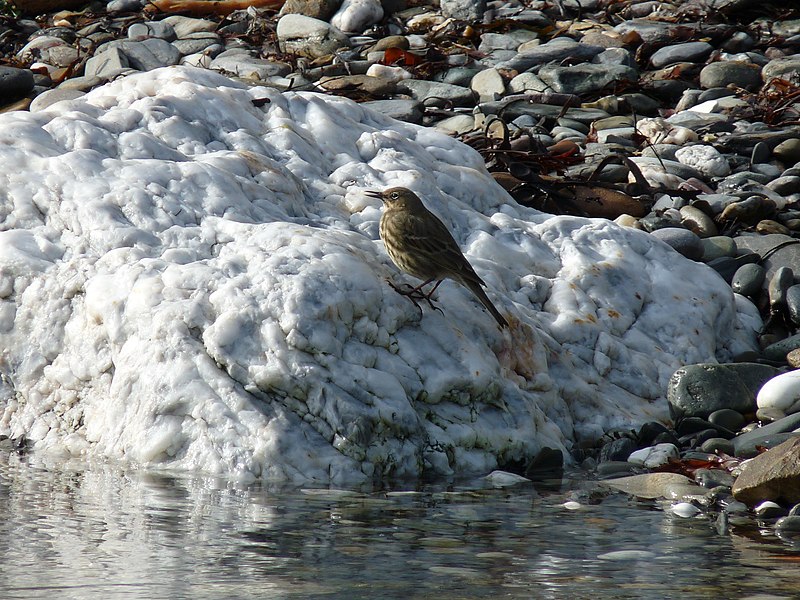 The Rock pipit commences the task of nesting about the end of April or the beginning of May, and is generally located close to the sea shore. it is sometimes placed on the ground and sometimes in a hole in the rocks or banks, but almost always placed in a position protected by a projection or eminence.

It is constructed using dry grass, stalks seaweed or water plants, and fine fibres, it is usually lined with wool,fine moss or hair.

The eggs number as a rule four or five and differ much in appearance. They are a pale yellowish or brownish white ground colour, spotted with brownish red, the markings being somewhat dense and run together at the large end. However, samples have been encountered that are almost entirely brown, and others are found being of a greenish-grey colour, with a streak at the larger end. The surface in all cases is lacking any polish and are thus dull.

The eggs are incubated for 14-15 days and the task is carried out by the female. When the young hatch they are blind and helpless. They will be fed by their parents for a further 15-16 days before they are ready to leave the nest.

British Birds Courtesy of the BHL. 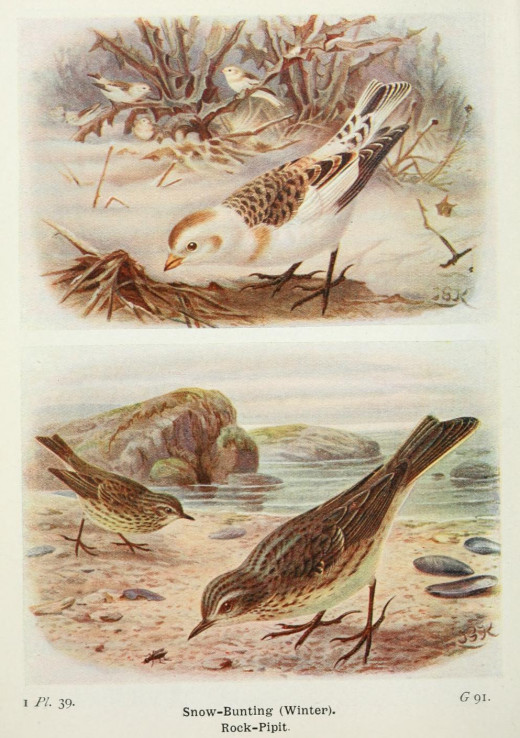