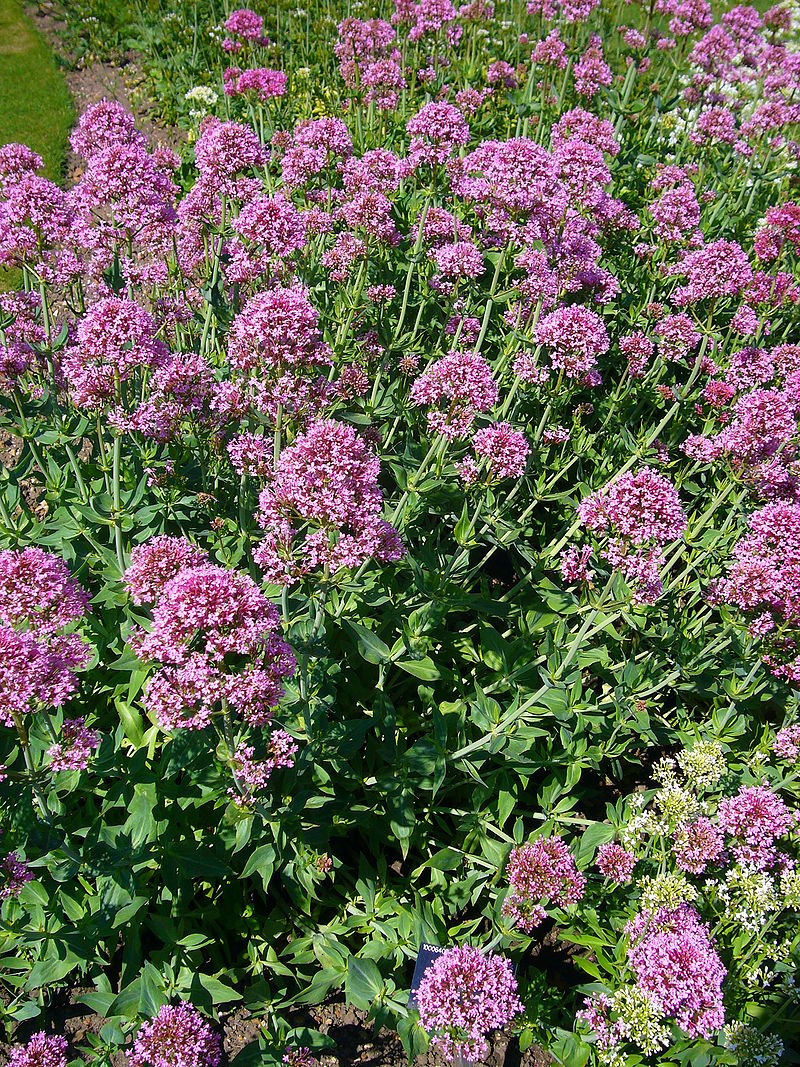 The Red Valerian has acquired many alternative country names including the Spur Valerian, Red Spur Valerian, Kiss-me-quick, Fox's brush, Jupiters beard and Pretty betsy. Hence when one is looking for a particular species the scientific name is the most reliable. Each plant has one Scientific name which is recognized world wide.

It is a perennial plant of the Caprifoliaceae family within the Order of plants known as the Dipsacles. It is a native species of the Mediterranean region,however, it has been introduced into many other countries as a popular garden plant. It soon escaped into the wider countryside where it has become established  in the wild in countries such as France, USA,UK, Ireland and Australia.

Description of the Red Valerian.

The root-stock is perennial and branches readily allowing it to take a firm hold in the crevices where it becomes established in localities such as on old walls or in rocky places,such as on cliffs. The stems are stout and somewhat woody at the base and they attain the height of between one and two and a half feet long. They are hollow and smooth. The leaves are two to four inches long and pointed,arranged in opposite pairs. They tend to be fleshy and almost entire,oval to lanceolate in form. The basal leaves are stalked the upper leaves are not.

The numerous small flowers just over a centimeter {half an inch } across form masses of round or domed branched clusters at the top of the stems. They are coloured either red or a delicate pinkish colour more rarely white varieties occur. The spur to the long tubular corolla  is a key feature and gives rise to the common name of Red spur Valerian. Each flower has a single protruding stamen. They flower from June to September, some cultivars have a longer blooming period.

The fruit or seed capsule,resulting from pollination by bees,moths and butterflies, are small and dry and are carried on the wing on small 'parachute' like pappus, in the manner of the dandelion seed.

In the past both the leaves and roots were eaten,either raw in salads or lightly boiled, the roots were boiled in soups. However, there seems to have been variable opinions on the quality and taste. Although this plant has been used medicinally there is no scientific facts to back up any effectiveness they may or may not possess.  It is more than likely that this species was mistaken and therefore used for the true Valerian Valerinana officinalis. 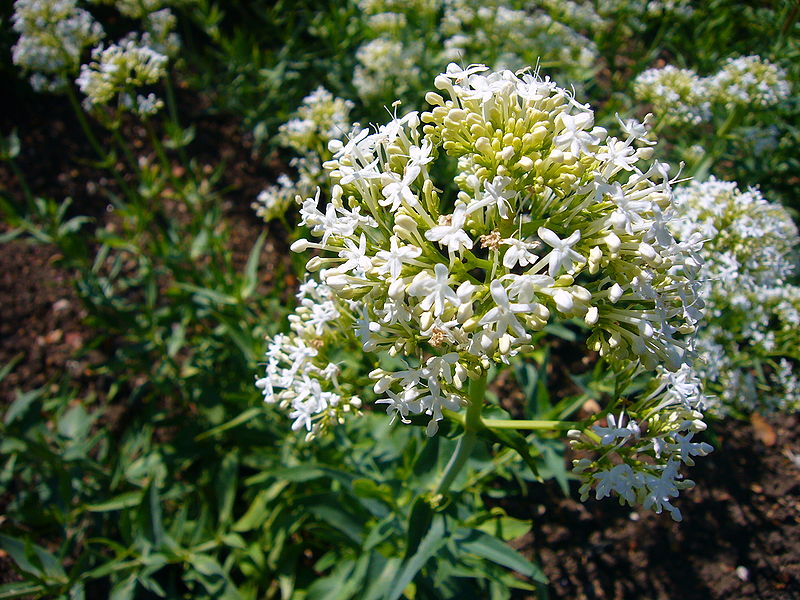 Red Valerian and the garden. {Cultivars}

The cultivars are a late spring to autumn ,flowering perennials and are fully hardy,requiring a sunny aspect. They thrive in exposed positions in poor, especially, alkaline soils,and they are propagated by seed in the spring or autumn.

The cultivars generally grow taller than their wild relatives. They are especially good for the beginner gardener,or those that may not be 'green fingered', for they are of low maintenance.They have ,usually, simple ,foliage arranged in opposite pairs and a terminal cluster of crimson, pink or white flowers They are small and trumpet -shaped. They should be grown in a sunny aspect in sand,loam or chalky soil,either in Alkaline or neutral ,poor but well drained soil.

In the garden they can be grown in flower borders and beds, wall-side borders,informal gardens and coastal wildlife gardens. The stems need to be cut down in autumn,or if self seeding is a problem they may be cut back hard in July after the first flowering. They are generally pest and disease free.

All plants that feature on this site are grouped together in the content banners above. Click on the relevant banner. and scroll down.

Flora via Links. Click on the links banner at the top of this page. Scroll down to relevant box. Click, this is a direct link to the article.