This is a new series looking at the plant species that occur on the Red List of Conservation in the UK. The criteria for appearing on the Red list includes a loos of Numbers or population decline of 50% or more since 1976. Here in part -1 we look at the species Adonis annua commonly referred to as the Pheasants eye. Its status in the UK is Endangered and is Nationally Scarce. It has been a UK Biodiversity Action Plan Species since 2007.

These plants grow up to 50 cm {18 inches} tall and are frequently much branched. However, in dry, nutrient poor soils they may be much smaller. The leaves are much divided into bright green, parallel-sided segments.

The flowers are borne singly at the end of the stems and there are rarely more than thirty per plant. They are cup shaped with 5-8 deep red petals with a dark basal spot and black anthers. The central receptacle of the flower elongates  as the seeds ripen with around thirty seeds per flower. The seeds are large and similar in size and shape to a grape pip.

Adonis annua is found almost exclusively in arable habitats in the UK., but it can also in former arable land until associated vegetation becomes to closed. It is found chiefly on chalk but also on Jurassic limestone. It is thought to have become naturalized in the UK before 1500 AD.

Although fairly widespread in its distribution, it has never been abundant, with the majority of sites  in a line from the Humber to the Seven esturaries. However,it was formerly a widespread and locally frequent plant of arable land, mainly on chalk of southern and eastern England. In the late 18th century it was sufficiently abundant in Kent and Sussex and Surrey for it to be gathered and sold commercially as a cut flower.

One of its former strongholds was on Jurassic  limestone of Portland in south Dorset where the first localized record was in 1832. It was frequent there until  the late 19th century, but is is thought that the last records from there was the 1980's. the only known surviving populations in Dorset are near the Purbeck coast near St.Aldhelms Head.  There is a small possibility that it may appear at Portland when cultivation of the ancient strip fields is resumed.

There are regular records from the corner of an intensively managed field in northwest Kent and from the disturbed rides of a conifer plantation established on former arable land near Eastbourne Sussex. It has been known from a field in Reading since 1957,where more than 100 plants were recorded in 2004. Sites were known in the 1970's from Cambridge chalk, but the last site at Castle Camps was in a chalk pit,now filled in.

Recent records from Suffolk, are deliberate introductions as part of a project carried out by the Suffolk Wildlife Trust, but they are not known to have persisted. In my home county of Lancashire it was last recorded in 1907.

A look at the plants biology.

Pheasants eye is an annual member of the Buttercup family Ranunculaceae. Seedlings can germinate both in spring and autumn,although the majority germinate in the autumn in arable situations,plants are found largely in autumn sown crops.

Autumn germinated plants flower earlier and grow much larger than those which germinate in spring. In a field study the plants were most abundant in plots drilled between mid-October and the end of November,with few plants appearing in the spring sown crops. Germination can evidently occur immediately  after seed is shed from the parent plant,with dormancy being imposed by low temperatures in the winter,to be broken again by high temperatures in the summer to allow germination in the following autumn. This is typical behaviour  of autumn germinating annuals in the temperate regions.

After germination, plants form a rosette of leaves persisting through the winter in autumn germinating individuals. A single erect stem elongates in early to mid-summer,branches extensively in its upper parts,and they flower from mid-June to August. Little is known about the breeding system in this species it is likely to be at least partly self-fertile. Little is known about the susceptibility  to herbicides although it is known to be susceptable to the majority of broad-spectrum herbicides.

It is a plant that does not tolerate a dense closed canopy. It needs exposed soil for germination. In arable situations  the disturbance is created by the plough.

Flower and the much divided foliage.  Courtesy of Kurt Stuber. CC BY-SA 3.0 License. 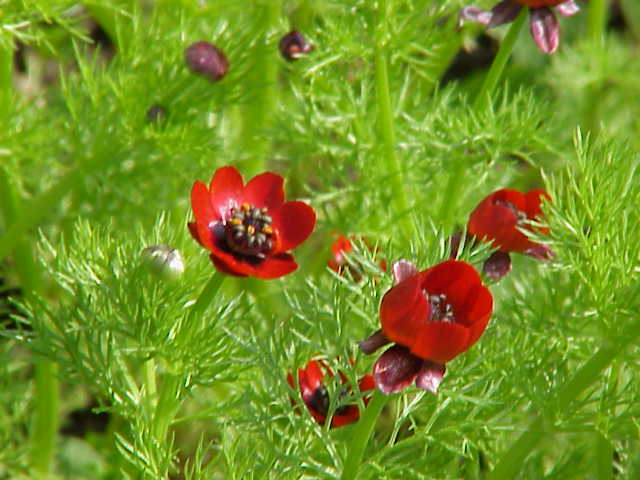 The major reasons for the loss of populations in arable land has been progressive intensive farming since the second world war. This species is particularly susceptible to change because it produces comparatively few seeds with little ability to disperse,and with a limited life in the seed bank.

Before 1950 many sites were lost including near extinction in the north and west of the country. The threats today come from habitat destruction due to agricultural improvements ,high levels of nitrogen application and use of broad spectrum herbicides,early autumn cultivation and crop-drilling.

The development of closed grassland following the cessation  of ploughing. Field margins can be taken out of production both as part of  farming operations and also as part of agri-environmental schemes. Development of closed grassland and scrub in forest rides at Friston Forest and on disturbed ground at Bulford are just some of the projects trying to encourage Adonid annua.

The plant is not protected by any sites of special scientific interest {SSSI's} or nature reserves. It does not occur in any farmland owned by the National Trust. Of the two non-arable sites one is owned by the Forestry Commission  and the other by the Ministry of Defense. Several sites are now under favourable management under agr-environmental schemes,these include eleven of the twenty five sites at which the plant has been recently recorded. However, there is no guarantee that funding will be available in the future.

The leaves and roots are poisonous to humans and animals.

If any image or video is reused from this page acknowledgement of the relevant author must be given along with the relevant license.

The images on this page may be reused, however, the relevant name of the author must be attributed, along with the accompanying License.

Associated Pages. Click on the relevant content banner at the top of the page,scroll down to view.

All other flora that occur on this site are grouped together in the content banners above.

Flora via Links. Click on the Links banner above. Scroll down to relevant box, click this is a direct link to the article{s}.