The Ranunculaceae family of plants-featuring the Monkshood

The Rununculaceae Family of plants contains the buttercups and their relatives. The buttercups were once commonly known as frog foot and crowfoot, the latter now being reserved for aquatic species of buttercup. The former probably derived from the Latin name for the frog -rana from which the Order takes its name. This because the plants and the animals tend to share the same damp habitats of the buttercups.

The family Ranunculaceae belongs to the Order of Ranunculales. The genera in the Order includes Ranunculus of which there are about 600 species, Delphinium 365 species, Clematis-325 species and Aconitum-300 species. Altogether the Ranunculales contain about 60 genera and 1700 species of flowering plants.

They are herbacious, very seldom shrubby plants with aqueous juices. They have round or irregularly angled stems, alternate petiolate leaves without stipules, but with dilated leaf stalks. The blade of the leaf is entire or variously lobes, seldom compound { a leaf consisting of two or more leaflets borne on the same leaf stalk}

The Inflorescence { arrangement of flowers on the stalk} is variable, either solitary, ramose {having branches} or paniculate. The flowers are regular and united or separated. The sepals are free, definate, from three to six, deciduous, often petaloide and rarely absent. The petals are equal in number to the sepals and alternate with them, or, two to three times as many, often deformed. The anthers are adnate { growing closely attached to an adjacent part of the oragan, and are two celled.

The fruit {seed capsule} in general consists of small "nuts" or achnes becoming baccate {berry like} with one or more seeds or caspular with one to two valves.

The Ranuculae family is diverse.

Image courtesy of Dr,Thome's Flora 1840 and the BHL}

Ranunculaceae are in general poisonous plants, as remarkable for the acridity of their juices and venemous properties as for the beauty of their flowers. Their deleterious {harmful or injurous} properties are so volatile that in most cases simple drying or infusion in water or decoction is sufficient to remove them and to render some species as innocuous. { Never use members of this family of plants for home made preparations for internal use}.

It is said to be neither acid nor alkaline, but its activity is increased by the addition of acids, or the admixture of sugar, honey, wine ,spirits etc, and is only effectually destroyed by the agency of water. The sap of buttercups contains protoanemonin, other compounds such as alkaloides and glyocides are also common. Protoanemonin may cause severe blistering of the skin which are slow to heal.

Next we review a familiar member of this family the Monkshood Aconite napellus.

Monkshood is a very popular garden plant placed in the genus Aconitum whose name is thought to have derived from the Greek akontion meaning a dart. This was due to fact that some barbaric races used extracts from the plant to poison their arrows and the darts of blow pipes. Alternatively many support the theory that the name derived from akone, indicating rocks, because they tend to flourish in rocky localities.

Monkshood is a hardy perennial, with a fleshy root which is a pale colour when young, but as it matures it develops a dark brown skin. The stem arises from the root, attaining the height of 3 feet { 90cm} and is adorned with dark green glossy leaves, which are deeply divided and flowers which are arranged in clusters which are coloured dark blue. These flowers are frequented by bumblebees.

The petal like sepals are purple with one of them  being in the form of a hood similar to the ones worn by medieval monks, hence the common name of this plant, which was first used in the Middle Ages when it was also known as the helmet flower.

The plant has been used medicinally in Homeopathy, however, the monkshood is very poisonous and should NEVER be used in homemade preparations. Because of its toxic nature it may be prudent here to mention the symptoms of aconite poisoning which begins with a tingle sensation, followed by a numbness of the tongue and mouth, and it is said that people affected have the sensation of insects crawling all over the body. Nausea and vomiting with gastric pain, the pulse slows down, the skin becomes cold and clammy which may be accompanied by giddiness and staggering. All species of monkhood contain an active poison especially so in the roots. It is advisable to warn children of the very real dangers of monkshood. 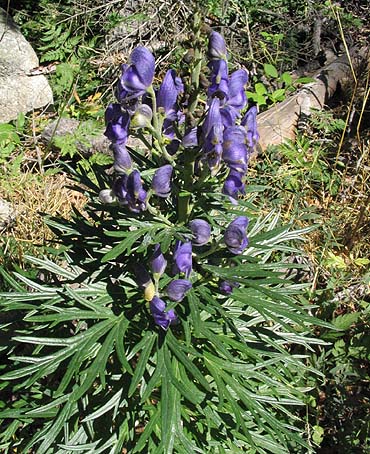 Images on this page may be reused. However , the name of the relevant author must be attributed along with any accompanying license.

Associated pages. Click on the content banners at the top of this Page.  Scroll down to view.

All other species of plants that feature on this site can be viewed by clicking on the relevant content banners on the right hand side of this page { they are all grouped together.}

Flora via links page. Click on the links banner at the top of this page. Scroll down to the relevant box. Click, this is a direct link to the article.{s]] includes the series Past and Present Medicinal Uses.

flora via your search bar.