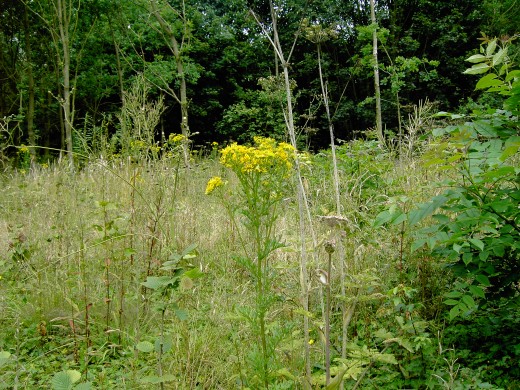 The Common Ragwort, Senecio jacobaeae, is a native plant that may be encountered in grassland, open woodland, waste places, roadsides , pastures and even on walls. it is another member of the large Asteraceae, family of flowering plants.

The genus name of Senecio derives from Latin and alludes to "old man" referring to the white plume s that carry the seed away from the parent plant in a parachute fashion, a common distribution method of this family.

The common ragwort varies in height from 60-150cm depending on the growing conditions. The hairless stem is furrowed and branched, upon which are irregularly divided foliage which take on a ragged appearance and gives rise to the plants common name -a "ragged herb". The basal leaves are much larger and broader than the stem leaves which are often cut into lobes right to the midrib..

Raggy leaves of the ragwort. 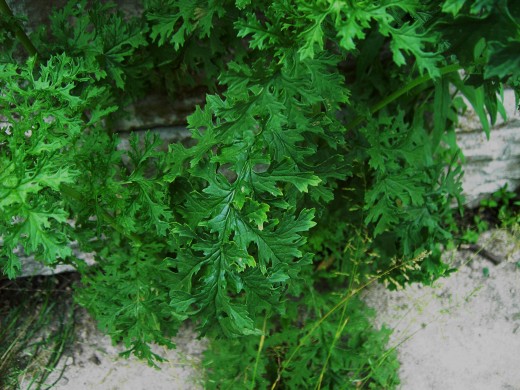 The daisy-like yellow flowers are arranged in relatively large flat topped clusters that botanists term as corymbs.. The clusters are branched towards the summit where the bright yellow flowers are situated. the flowers are one to one and a half centimetres wide with 12-20 ray florets. beneath the florets are bracts that are coloured black and the tips.

Bright yellow flowers of the ragwort. 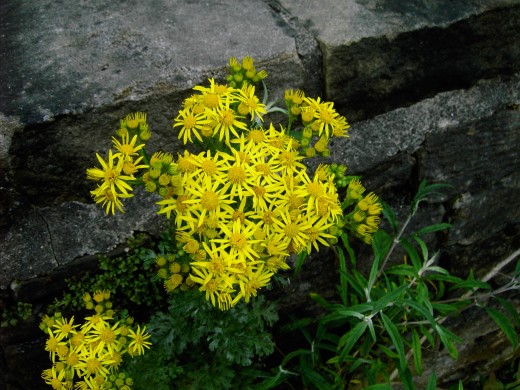 A single plant may produce up to 30,000 seeds that have a 70% germination success.

Concern arises when these plants become the dominant species in pastures and other grazing land. This species is poisonous to grazing animals and especially to horses. The toxins build up over a period of time before causing irreparable damage to the animals liver. A horse suffering from ragwort poisoning becomes a distressing sight. The symptoms can include weight loss, vomiting, and disorientation. They can become blind. All parts of the ragwort remain poisonous even after they have been cut down. 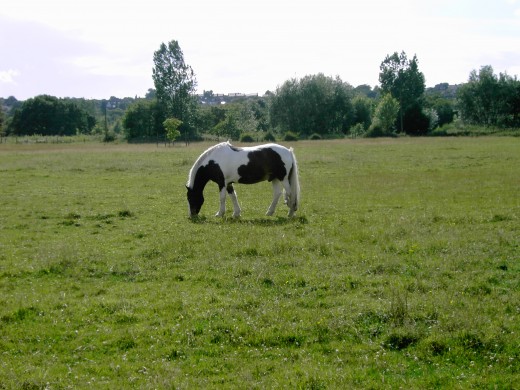 Ragwort is named in the Weeds Act 1959. This Act names five injurious weeds, they are the common ragwort,spear thistle, creeping thistle, broad leaved dock and the curled dock. Japanese knotweed, Himalayan balsam and Giant hogweed are dealt with under Schedule 9 of the Wildlife and Countryside Act 1981. 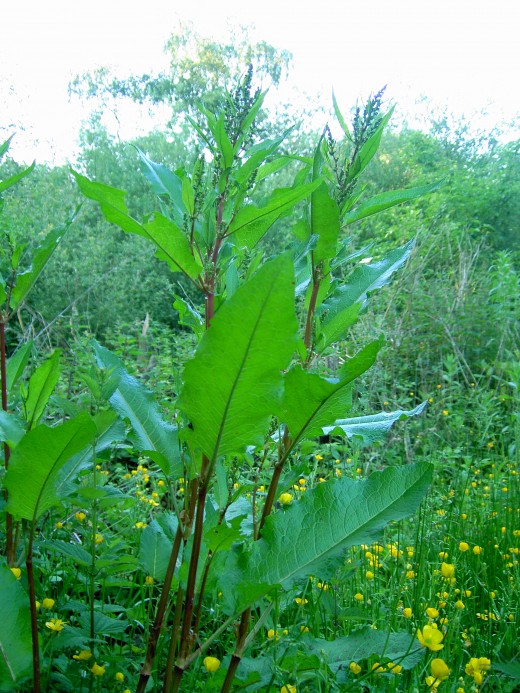 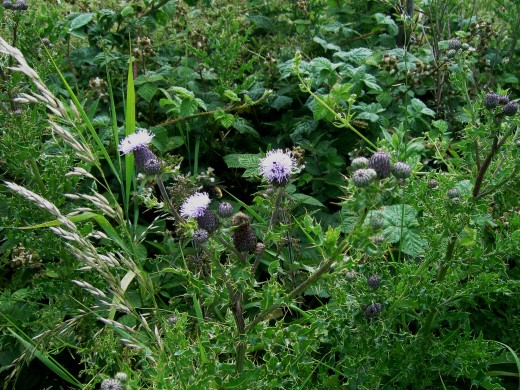 As previously stated the ragwort is poisonous to horses and other livestock with potentially fatal consequences if ingested even in a dried state. Over 90% of complaints that the Department for the Environment, Food and Rural Affairs { D.E.F.R.A.}, receives about injurious weeds concern ragwort. In 2003 this concern gave rise to the British Horse Society sponsoring a Private Members Bill to amend the Weeds Act, to provide a a code of practice to prevent the spread of ragwort.

The government supported the Bill and the Ragwort Control Act was formed. It came into force in 2004. Further guidance was published in September 2005 Giving guidance and options for the control and disposal of the plant. Ragwort is the only one of the five named in the Weed Act that is detrimental to animal health. A code of practice for any land owner who has grazing land affected by ragwort, is available on the D.E.F.R.A. website.

Away from grazing land the ragwort is an important part of the eco-system. A recent survey suggests that there has been no significant increase in ragwort over the last 30 years. { however, there may be fluctuations at local level}, ragwort is the host plant to many creatures such as leaf beetles and micro moths for nectar and as a larval food source. The most noticeable of these and the one most likely to be encountered is the caterpillar of the cinnabar moth. These orange and black caterpillars are capable of stripping the foliage bare. They eat the plant with seeming impunity . Nature has decreed that the build up of toxins in the caterpillar will be sufficient defense for the caterpillar from being eaten by birds.

Caterpillars of the Cinnamon moth feeding on Ragwort. 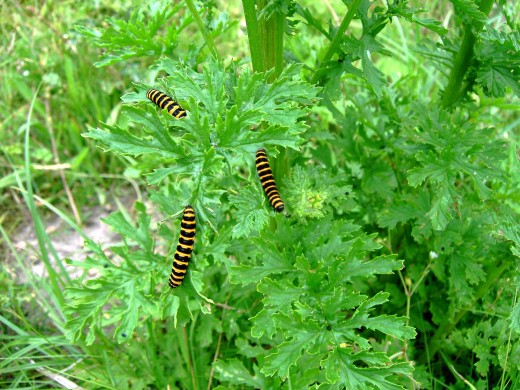 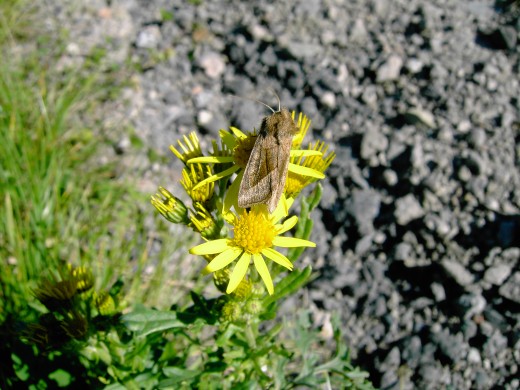 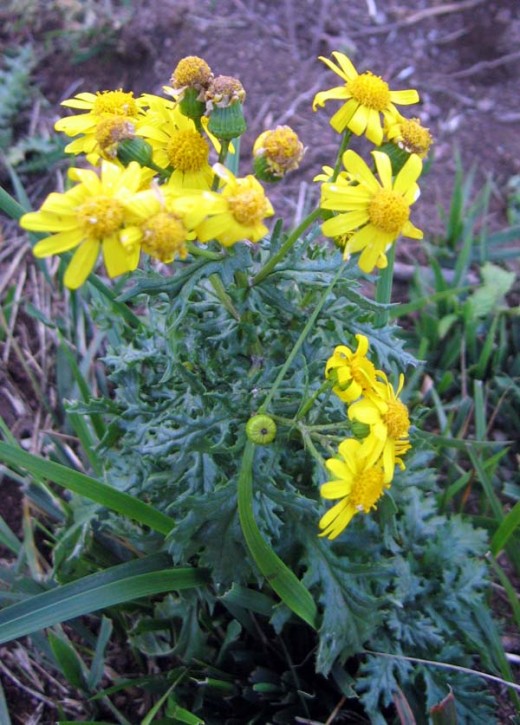 The plant has been used medicinally in the form of poultices. The whole plant is bitter and acrid. The juice is said to be of a cooling and astringent nature. Thus the juices were employed as a wash for burns and sores. it was much used to wash cancerous ulcers, which gave rise to the country title of cankerwort. Poultices were used to alleviate painful joint pains arising from gout or rheumatism.

Another species of ragwort The Oxford Ragwort ragwort, Senecio squalidis, is beginning to expand its range in Britain. It is an introduced annual or short lived perennial which tenants waste ground, walls, and waysides. It escaped over the wall of the Oxford Botanical Gardens in 1794 and is now common throughout England and Wales.

This species has a long flowering period and may be encountered in flower from March until December. It prefers dry waste ground, walls, and railway embankments and thus is more common in the east of the country where dryer conditions prevail.

The flowers of this species are of a lemon colour formed in loose irregular clusters. The double row of bracts beneath the flowers are conspicuously tipped black 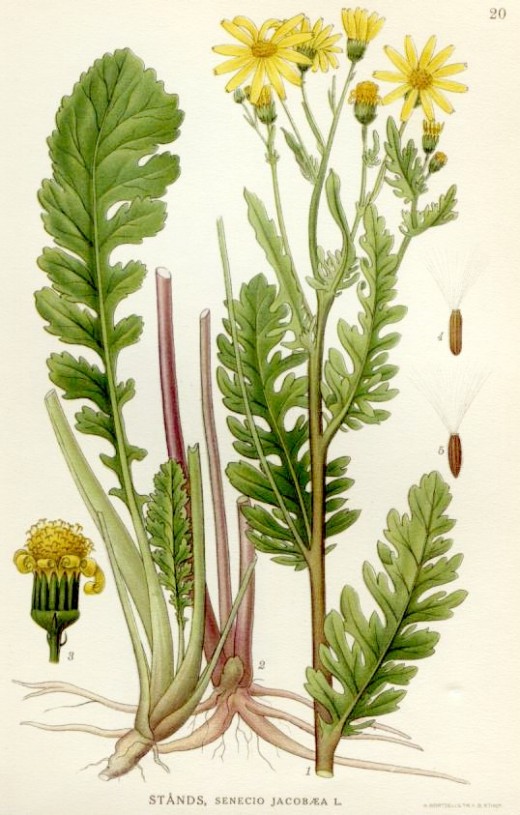 Other species of ragwort in the UK.

There are other species of ragwort that occur in the U.K. but these are much more specialised in habitat and are often constricted to certain regions of the country. These include the March ragwort, a plant of marshes, river banks and ditches.

Hoary ragwort which is similar to the common ragwort, however, this plant is covered in hairs which give it a grey-green appearance.the foliage is divided into narrow pointed lobes. it is found on dry rough grassland, on clay or lime rich soils. They flower form August until October.

The fen ragwort is confined to Cambridgeshire in the south of England.