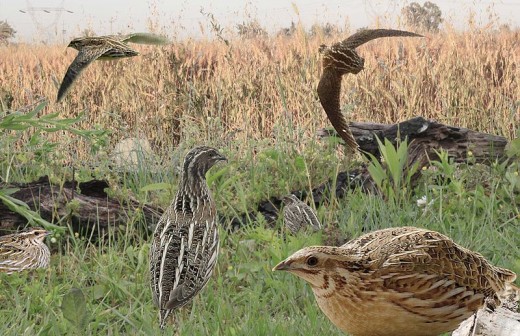 The Quail Coturnix coturnix {from Latin cortunix -a quail}, belongs to the Order of birds known as the Galliformes and the family Phasianidae. They breed in Europe, north and central Asia, east and southern Africa. The birds winter in Middle east south to Central Africa.

They are birds of fields ,pasture and Steppe.

The Gaelic name for the bird is Gearra-gurt the Welsh Sofliar and the Irish Gearg.

Here we look at the species its lifestyle and breeding . There are historical observations from past ornithologists and other eminent writers of days gone by. As always we commence with a description of the subject under review. 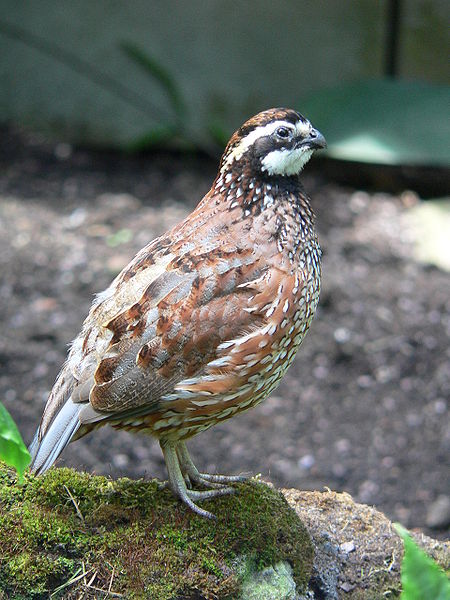 The adult male has a bill of grey brown above and grey blue below. The irides are hazel. From the forehead to the nape is a narrow streak of yellowish white, having on each side a broader streak of dark brown.

Over the eye is another yellow white line, as long as that on the crown. The chin and throat are white, with a double semicircular band of dark brown running down from under and behind the eye, and having a black patch at the bottom in front.

The breast is a brown ochre colour, the shafts of the feathers nearly white. The lower breast, abdomen, and under tail coverts are of a yellowish white. The upper parts are brown with shafts of pale brown. The quills , brown, the outer webs marked with light brown, except the first, which has an outer edge whitish. The tail, of twelve feathers, brown, hid by the upper coverts. The legs and feet are yellowish brown.

The female lacks the semicircular dark marks on the neck. They are approximately six to seven inches long {15-18cm . Both sexes each weigh about 100 grams. In relation to their body size the wings are medium short, the tail short as are the neck and bill. The legs are medium short. The birds have the typical whirring game bird flight, sometimes glides on don curved wings. Walks or runs on the ground.

The voice has been likened to 'quic-ic-ic' heard by many to sound like 'wet my lips'. It is a far carrying call. At close range, there appears to be a growling 'row-ow' call note. When flushed there is a harsh and rapid 'creuce-crewee' or 'cruce-cruce' call of alarm.

It is much the smallest game bird and more often heard than seen. 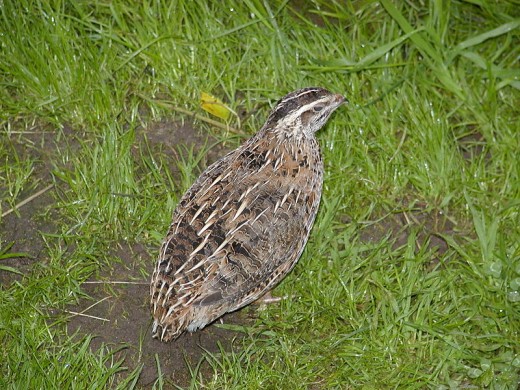 According to Rev.F.O.Morris, History of British Birds {1867} The Quail was very abundant on the continent of Europe, in Italy and France, and in Sicily and the Greek Islands. They go as far north in summer as Lapland, and the more temperate parts of Siberia and Russia.

In England he regarded them as being much less common than they were fifty years ago {1817} while the contrary was the case in Ireland,but he added they are more plentiful in some seasons than others.

N Rowe Esq of Worcester College Oxford wrote of their breeding in Devonshire {UK} in a corn field on Staddon heights, where the eggs were taken on August first 1850, and also on the moors about the Harbridge Flats on the Borders of Surrey and Berkshire {southern England}. Another prominent ornithologist wrote " Quails migrate north and south in spring and autumn in countless thousands, and vast numbers are taken by bird catchers. As many as one hundred thousand are said to have been taken in one day in the Kingdom of Naples. Three thousand dozen are reported to have been purchased in one year by London dealers alone"

The flight of the Quail is weak, yet they are obliged to cross the sea to seek a warmer climate in winter, and many are encountered on the shores on their arrival in an exhausted state. looking through past records the birds would appear to have tried to stay in England in days gone by. One was obtained in the Parish of Nafferton Yorkshire {eastern England} in December 1851, one at Halliford in Middlesex {southern England} ,in September 1841, and one was shot near Worcester in January 1850. In January 1846, a pair male and female were captured , and other similar records exist.

These birds are very delicate eating, and the demand for their flesh and eggs, which were also regarded as a delicacy, was excessive. they were once commonly raised in confinement were they could easily be 'fattened'. The birds were captured in nets and traps. They were also shot in large numbers, it seems to have been a very lucrative business. Enormous twere sent to England during the 1800's from France and found a ready sale in markets and poulterer's shops, generally after a course of fattening in England.

Illustration of the Quail. 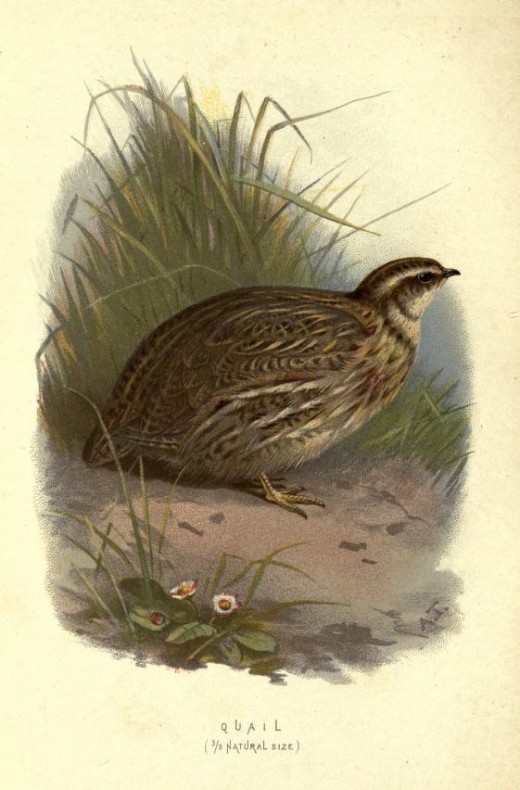 The localities chosen by the Quail in the UK are the same as those chosen by the Grey partridge, that is to say, meadows, corn, turnip,pea and bean fields, it is rarely encountered on high ground or wet marshy places. This little game bird feeds in the manner of the Partridge, on the ground, the feeding time of the Quail tends to be early mornings and again late in the evening until dusk. The main stay of its diet are seeds from the ground and invertebrates especially insects.

On the subject of the birds diet I came across a record by Mr.Thompson {1800's} who had examined the crops of about thirty Quails shot during the winter and early spring, and found that seven eighths of the contents consisted of the seeds of various weeds, among which were the various species of Plantain {Plantago}, Persciaria {Rumex} , Vetches,{Vicia} and Chickweed {Stellaria}.. "The crop of one bird contained nothing but the seeds of chickweed, and could not be any less than five hundred of them"

Another crop was filled with eleven slugs { Limax agrestis. To these may be added grain in small quantities, green food such as blades of grass and other succulent plants. The gizzard also contained small stones, which assists in grinding up the food. The above findings amply prove that the quail does much good to the farmer, by destroying noxious weeds and insects.

During the day time it skulks and hides in the security of the fields where cover is adequate, and if the sun is shining it will bask on the sides of hedges dusting and preening its feathers. Again in the manner of the partridge, when disturbed it will fly off, seldom to any great distance, and re-conceal itself in the herbage. it is also very fast running and will use this mode of movement to escape danger where possible, rather than taking to the wing.

Pairing takes place in spring, the time somewhat dependent on the weather and food availability.The Rev.R.A.Julian in the 'Naturalist' January 1852, relates that he was informed by a friend, that he had seen a Quail's nest near Ely, containing many eggs on the 26th September 1851. When he found it the old female was on the nest. This was certainly very late for the nesting bird, but it is likely to have been a replacement clutch, after the first attempt had been thwarted earlier in the year.

The nest itself is simply a scrape or a slight hollow occurring in the earth, with a few blades of grass or leaves suffice for a lining. here the eggs are deposited between 8 and 13 makes up the average clutch size. In colour they differ markedly from those produced by the partridge, having a reddish-yellow, or yellowish white background. They are marked all over with spots and blotches of umber brown. They are just over an inch long.

The eggs are incubated by the female for between 17 and 20 days, and the chicks are capable of running around shortly after hatching.

Eggs of the Quail. 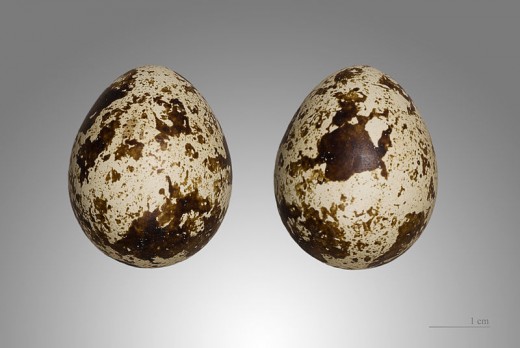 Historical attempts at introducing other species.

According to Swaysland, 1883, several attempts were made to introduce the Virginian Colin,Ortyx virginianus, both into England and Scotland but none of them proved successful. Some ornithologists introduced it on to the British list on the strength of examples thus imported, which have been shot in various parts of the country. At that time it was resident in the eastern states of North America, extending nprthwards to south Canada and westwards to Texas, being subject to variation in colour which gave rise to it being divided into several sub-species. Swaysland concludes," that in its general appearance this bird is a cross between a quail and a partridge, but is very different from either, and in America it is called by both these names"

UK- Amber listed due to declines in population/distribution of over 25% in the last thirty years or so.