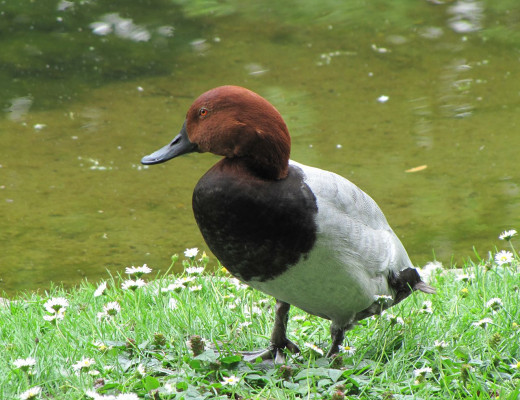 The Pochard belongs to the order of birds known as the Anseriformes and the family Anatidae within that order. It has been allocated the scientific name of Aythya ferina. Aythya derives from the Greek althula- a sea bird described by Aristotle while the specific name ferina derives from the Latin ferinus-a wild game bird.

In the UK and Ireland the species is Amber listed due to its small breeding populations as well as localised wintering populations. In Ireland they are confined to just ten wintering sites. The UK population is estimated at 38,000-48,000 in winter and 500 pairs in summer. In the UK they are classed as migrant/resident breeder and passage winter visitor.{ Source BTO }

The European population is estimated at between 100,000, and 180,000 pairs. The European conservation valuation is evaluated as 2 concern ,most in Europe declining. Populations vary from country to country and there follows some examples. 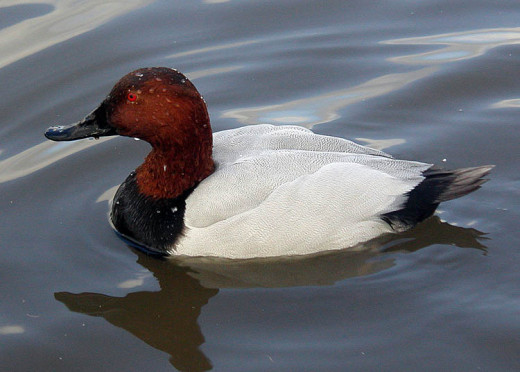 Uploaded to commons via Dani 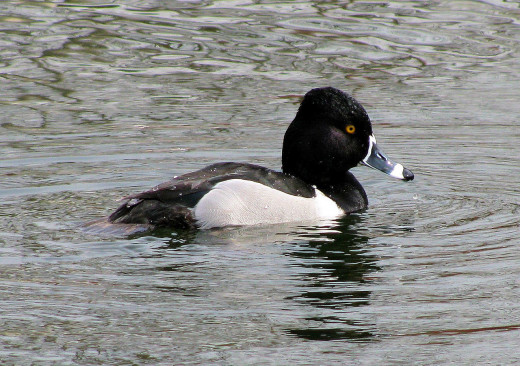 What are ducks of the genus Aythya ?

Aythya is a genus of ducks which consists of twelve described species. The name Aythya comes from the ancient Greek word aithuia which may have referred to a sea dwelling duck or an Auklet. The American genus is represented by species such as Aythya valisineria {Canvasback} and Aythya americana often referred to as the Redhead.

Diving ducks feed by diving under water,{ however, those in the genus Netta are reluctant to dive and feed more like the dabbling ducks.}. They are strong fliers,their broad,blunt tipped wings require faster wing beats than those of many other duck species and they take off with some difficulty. Northern species tend to be migratory,southern species tend not to be.

Dabbling ducks are reasonable at walking on land while diving ducks have feet placed further back on the body and hence do not walk as well, they are designed to propel the bird through the water.

Here we review the common Pochard, Aythya ferina,and as always we commence with a description of the species under review. 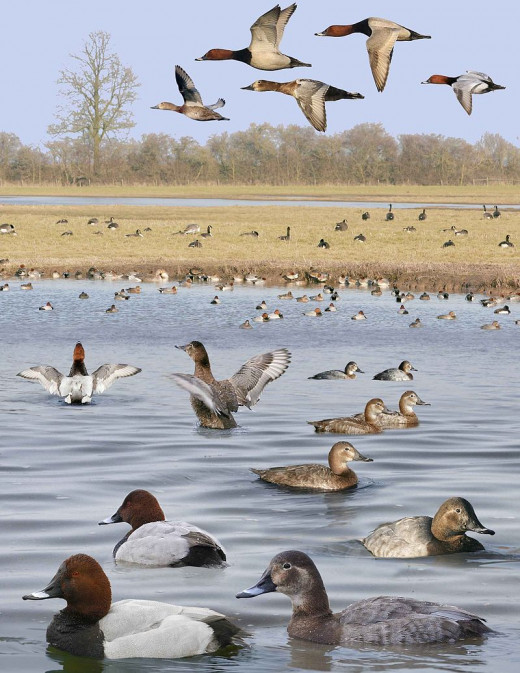 At A Glance--The Pochard is a stocky diving duck,smaller than a Mallard. The male is pale grey with a rusty red head and neck,and a black breast and tail with a pale grey body the females are more easily confused with other species of duck they are brown with a greyish body and pale cheeks. However, during the 'eclipse',when ducks grow their new feathers the males look very similar to the females. Nature has deemed this so in order that they are better camouflaged and they don't draw any attention of predators.

In more detail---The male Pochard in full plumage is a remarkably handsome bird, the chestnut head and neck contrasting with the ruby coloured irides. The breast and forepart of the back,brownish black. The speculum is grey. The bill black with a blue centre.The wings and tail a greyish brown. The upper parts are minutely undulated with dark lines on a whitish background.

The adult female is smaller than the male with the head and neck a reddish brown. The throat is inclined to white. The vermiculations on the upper parts are brown and not black. The bill of the female is brown.

The legs and toes are greyish blue,webs bluish black. length about 46 cm. weight male and female about 930 g.

The flight of the Pochard on first rising from the water is low and heavy, the wings being small in comparison to their body. Their ordinary call is a whistle and the alarm note somewhat like a croak. Pochards are readily distinguishable in flight by their dark fore parts and wings and light bodies. 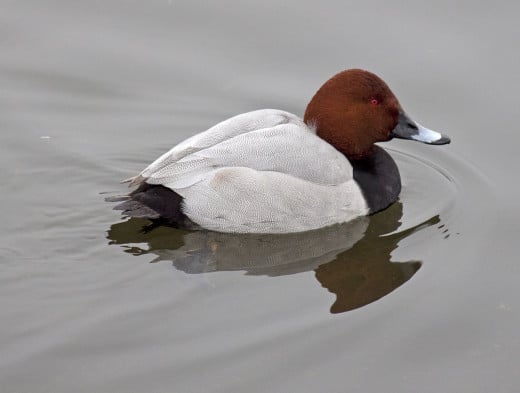 Originally posted on Flickr -uploaded to Commons by MPF

Pochards are more common in the UK during autumn and winter,when large numbers fly from eastern Europe and Russia to escape the bitter cold weather there. they are still quite rare breeding birds in Britain with an estimated 350-630 pairs only.

Together with the Tufted duck A.fullgula,with which it often associates,the Pochard is one of the common inland diving ducks. The flocks are generally less active by day than Tufted ducks,often sleeping for long periods,they feed at night.

They also tend to be in flocks of one sex only,mostly males in the UK. In late autumn hundreds of migrants may appear on a lake for a day or two and then move on at night. It is interesting to note that in Butler's time 1898,the Pochard was also referred to as the 'Poker' or 'Red-eyed poker' and the female was known as the Dunbird in many localities. It would seem that these names applied indiscriminately to males and females,young and old alike.

In the Fens { Norfolk} they used to be known as 'parker's' or 'half birds' . Butler also knew the Pochard under the scientific name of Fuligula ferina, the name allocated to it by Linnaeus. He also reveals that at that time it was a common winter visitor to the British Isles and some remained resident throughout the year, nesting in suitable localities.

Butler was also well acquainted with the American Canvasback,which he knew as Fuligula vallisneriana,a name he said derived from a fresh water plant on which it fed,and thereby obtained a delicate flavour. he goes on to add, " The Canvasback is a much larger duck than the Pochard and with a longer,slenderer and more tapering bill and their are also differences in plumage, the chief of which are the character of the markings on the back, these in the former have waved lines of black more open and less prominently marked, the ground colour while greatly predominating, a well marked feature to which it owes its familiar name of Canvasback"

Another eminent writer Mr.Haigh, records-" I have never considered the Pochard a common species on the east coast of England. In some winters it is fairly plentiful on the Humber { N.E.England} and in others we may never obtain a single specimen. In the winter of 1885-86 ,it was common particularly adult males and the following winter both adults and immature , and again in 1889-90,with a preponderance of male birds. "

" The sexes probably to some extent separate in winter. On January 26 in 1889,I saw twelve adult males swimming in company on Crosby Pond a lonely sheet of water on the Lincolnshire Wolds,and at the same place in 1891. on match 19, six adult males and four immature males acquiring the adult plumage. Again on January 9 1893, three were shot from a small flock of five,with a punt gun at Tetney,on the Lincolnshire coast, these were all adult mainly in splendid plumage.On may 23 in 1883,I saw three adult males on the Humber, these may have come from some local breeding place such as Hornsea Mere"

In 1862, Lord Lilford had a female and a quantity of eggs brought to him from the Marisma below Seville, and was told that in the previous spring and summer the species was plentiful.

According to Sharpe 'Hand book to the Birds of Britain'1896, in some of its winter quarters,especially in India, they occur in flocks of thousands. Mr.A.O.Hume,whose excellent notes on wildfowl were not so well known in this country as they ought to have been, gave a very interesting account of his experiences with the Pochard in India, from which I take a brief extract. he says that inn some places,such as the Sambhar lake ,many acres of water may be seen completely paved with Pochards.

" They are eminently swimming and diving ducks,but walk badly. Their flight is slow and heavy until they get well on the wing,after which it is fairly rapid, but they rise with some difficulty in perfectly calm weather. They swim very rapidly and gracefully,as a rule,rather deep in the water,but at times, especially when there are a lot a play together,for a minute or two, quite high in the water,as if barely resting on it. They are very playful and skirmish about together,chasing each other scuttling along and surface one moment,out of sight the next,and they are grand divers." 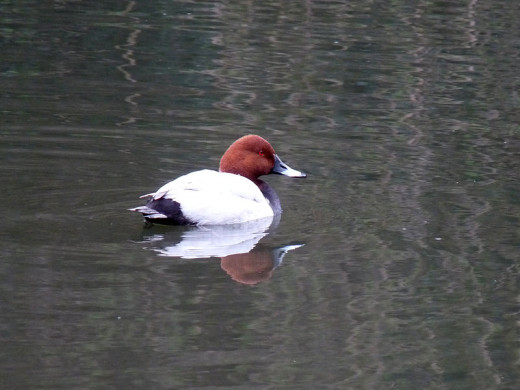 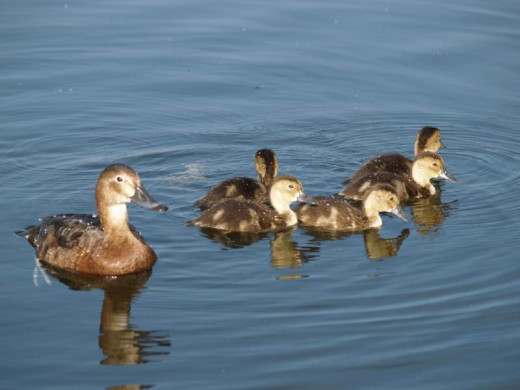 Uploaded to Commons by MPF { Picture taken in Denmark.}

The flesh of the Pochard was in great esteem,however, according to Butler and Gray,their flavour and quality entirely depends on the special character of their food. Robert Gray stated,that on the west coast of Scotland the Pochard is a useful bird for the table, but on the east coast it is in poor request. They were frequently on sale at the market in Edinburgh.

The British Game Birds and Wildfowl,1855, conveys that great numbers of these birds found their way into all the markets. " For the table the duck is one of the very best being considered very little ,if at all ,inferior to the celebrated Canvasback duck of America.

Swaysland, records that Pochards are good birds to be kept in confinement or on ornamental waters and they readily pair with other ducks,especially the Tufted duck. Mr.C.St.John gives the following account of one in his possession. " The Pochard which I brought home from Spynie,remains quite content and goes about with other ducks. he will eat whatever they feed upon,but prefers worms to everything else,showing great activity in diving for them when they are flung into the water. If they are given to him on the land,he usually carries them into the water before eating them."

The diet of the Pochard in the wild is chiefly vegetable matter torn up from the shallows of green grown lakes and ponds,but they will take worms,snails, young frogs and the fry of fish.

Pochard's nest about the middle of May, the nest is generally placed close to the water and well concealed. It is composed like the nests of other ducks of dead grass and sedges and ,or, other local materials.

The eggs which number between 8-10 are of a greenish-buff colour, the clutch is laid upon down that lines the nest. The female undertakes the task of incubation which lasts for around 25 days. The ducklings resemble young Mallards, but are of a lighter colour above. They dive freely and they may be observed sleeping, with head tucked in ,on the water, a thing I have never seen with the young of the ordinary surface feeding or dabbling ducks.

In the young male the black on the breast does not appear until the second year. previous to that the plumage resembles that of the female. They will become fully independent at about 50-55 days. 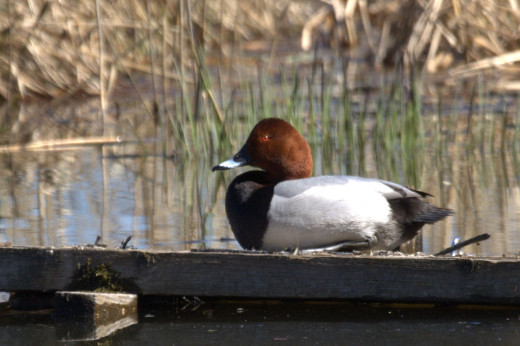 Uploaded to Commons courtesy of Magnus Manske { Taken in Finland} 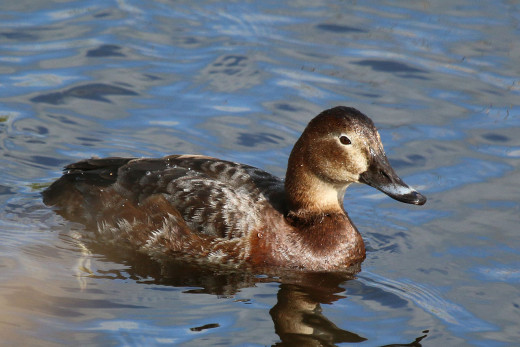 The images on this page may be reused. However, the name of the relevant author  must be attributed along with any accompanying license.