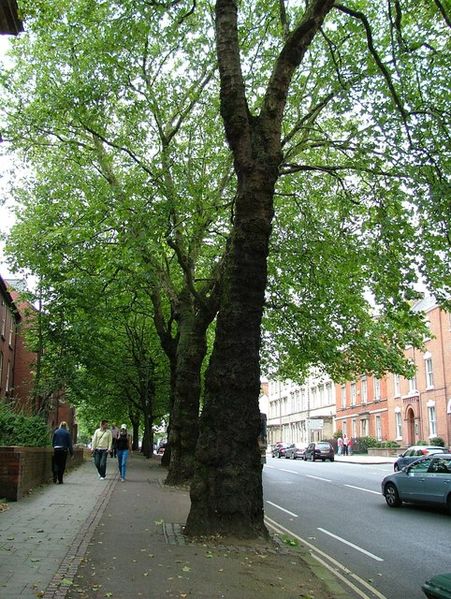 A Study of Trees, which aims to help those who wish to identify tree but are not sure of the species. Most people commence their tree identification by studying the form and colour of the leaves. This is fine when the tree is in leaf but of little use during the winter months when the tree is naked and the branches bare. However, every species has a characteristic{s} which help the observant to recognise the species.

Here we look at the Plane tree and its close allies ,and, with the aid of descriptive text and fine images it is my intention to help the reader to recognize the species. There will also be background and historical information included. 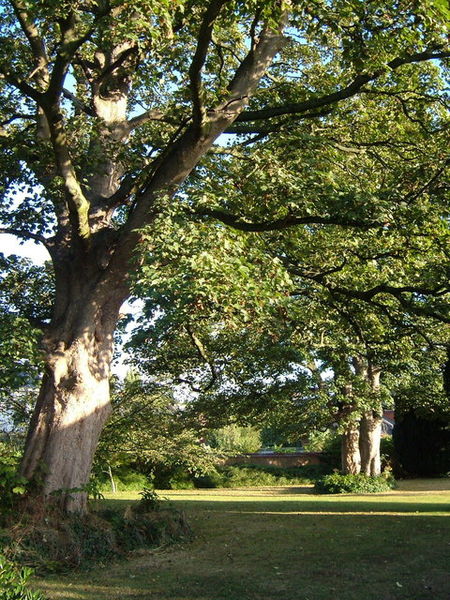 They are often referred to as London Planes .Some North American species, especially  Platanus occidentalis are referred to as Sycamores, also American Sycamore, American Plane tree and Buttonwood.

Lord Chancellor Bacon, was said to have introduced the Plane tree to England, if this is the case ,and, there is some controversy about it, then Londoner's owe him a great deal of gratitude. The genus name of Platanus undoubtedly derives from the Greek platus meaning broad, and is thought to be in reference to either the broad leaves or to its spreading shade, and according to some authors almost the sole representative of a very isolated type of catkin bearing trees which constitute it a distinct natural order, though there is some thought that it may be related to the Liquidamber { American Storax, Satin  walnut or sweetgum}.

There are trees that reach a considerable height up to one hundred feet ,with nearly cylindrical trunks, in old specimens of enormous girth and with wide spreading branches. It seems that our poets lacked enthusiasm for this tree ,so that it was the poets of America, the native home of one variety of Plane, who sang its praises. It was the appearance produced by the shedding of the bark that Bryant alluded when he wrote of the Green River---

" Clear all the depths where its eddies play,

And dimples deepen and whirl away,

The swifter current that mines the root"

The oriental plane is first mentioned among English writers, by William Turner, in his 'Herbal' printed at cologne in 1568,and in 1596 John Gerad { herbalist} had it growing in his garden at Holborn, the history of his specimen being subsequently given by him in his 'Herball 1597' page 1304, as follows---" My servant William Marshall, whom I sent into the Mediterranean Sea as Chirurgion unto Hercules of London, found divers trees hereof growing in Lepantae,hard by the sea side, at the entrance into the town, a port of Morea being part of Greece ,and from thence brought one of those rough buttons,being the first fruit thereof"

One of the most interesting points connected to the Plane tree is the geographical distribution of its various forms, which most botanist treat as distinct species, although according to others they have utterly failed to bring forward any one strongly distinctive character. There can be little doubt that the oriental form was indigenous to Persia, whilst if of human introduction in the Balkan Peninsula that introduction probably dates back more than 2,000 years.

In Spain and even in England, it seems that its short history has permitted the origin of tolerably distinct varieties The occidental Plane was first brought to England from Virginia in 1640 by the younger Tradescant, to his father's garden at Lambeth, where was situated that remarkable collection of curiosities which afterwards constituted the Ashmolean Museum at Oxford.

It is indigenous in the United States from Mexico to Canada and from the Atlantic to the Rocky Mountains. Its place is taken in Mexico by two forms considered as species by Dr, Candolle, Plantanus lindeniana and Platanus mexicana and in California by a third Platanus racemosa. It seems that the American Plane does not attain the size or age of its Oriental brother and neither form occurs commonly in forests or even in large groups, but single trees growing on plains or River Alluvium in which it thrives, sometimes reaching enormous dimensions.

In hot countries the shade it affords is very much appreciated The true oriental plane has a rounded outline ,a leaf with a wedge shaped base, and deeply five lobed, and generally two or more buttons in the fruitification. The Spanish variety has very slightly divided leaves, and most of our London plane trees belong to the intermediate form Platanus x hispanicus[ Formerly termed P.orientlis acerifolia} ,somewhat resembling the sycamore in its leaf outline.

The western plane is far less common here in the UK. It has a looser outline, differing,it has been said, from the oriental kind in this particular, as a pear tree does from the apple. Its leaves are divided to a moderate depth, and are scarcely at all wedge shaped or tapering at the junction of the blade with the stalk, and the fruiting branches commonly bears but a single button.

In its native country it thrives in damp river valleys, often growing on the banks and affording in consequence a more quickly grown timber than the oriental though it is thought to be inferior to its quality.

Illustration of a plane tree in winter. 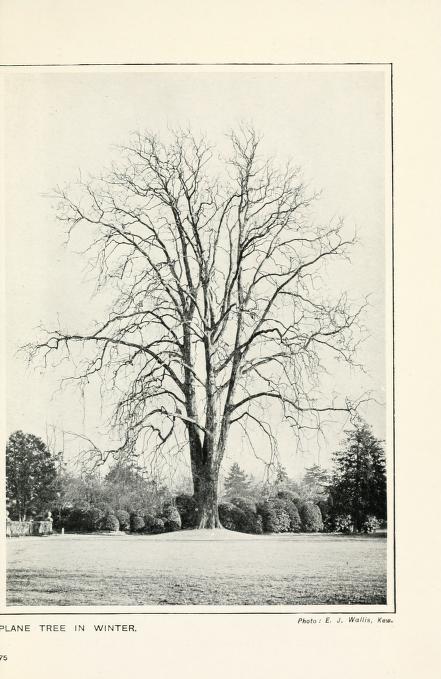 Catkins of the Plane tree

When the leaves are still relatively young, the drooping flower stalks are produced, the pollen bearing flowers being on distinct branches from those that yield the fruit ,though either kind is collected together into the characteristic 'buttons', or globular catkins.

The flowering branches are from two to six or more inches long, bearing from one to five, but more frequently three of the buttons. Those that produce pollen are simply collections of short stalked stamens mixed with a few narrow pointed scales,and, as is generally the case with catkin-bearing trees, the whole falls when the pollen has been discharged.

The fertile florets ,too, are of the simplest structure possible, being merely one chambered and one seeded ovaries ,each prolonged into a style, curved at its apex,and with a sticky stigma down one side, whilst the ovary enlarges into a little nut, a tuft of bristles grows up from its base giving the burr-like characteristic to the whole catkin.

Leaves and fruit of the Plane tree 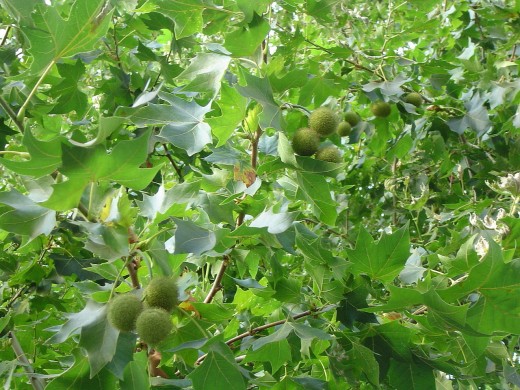 Foliage of the Plane tree

A copious annual crop of smoothly-polished leaves ,readily washed by the slightest shower, presents a large surface to the food-giving light and air, this  along with the bark constitutes an ideal city tree. The leaves are large with stalks of some length with prominent veins, generally five in number and radiating out to the acute points of their gracefully -lobed outline.

They are however, pseudo-palmate, only three veins radiating from the base, and the other principle ones being branches of these, unlike the Sycamore, in which five or more radiate from the base.

Individual leaves may be as much as nine inches {23 cm } long and eight inches { 20cm } wide, and though a certain general character of outline distinguishes the different geographical races the variety of detail even on a single bough ,is principally infinite. Boulger ,states that " No leaf rebels more against the misrepresentation of the geometrical school of draughtmen." 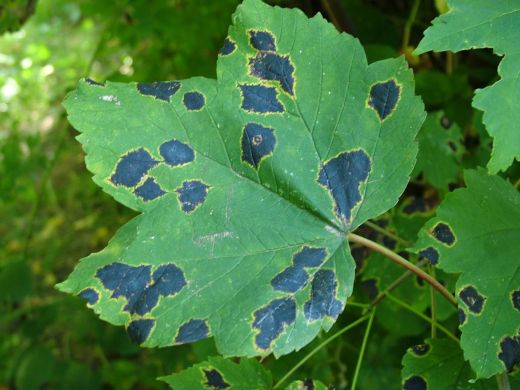 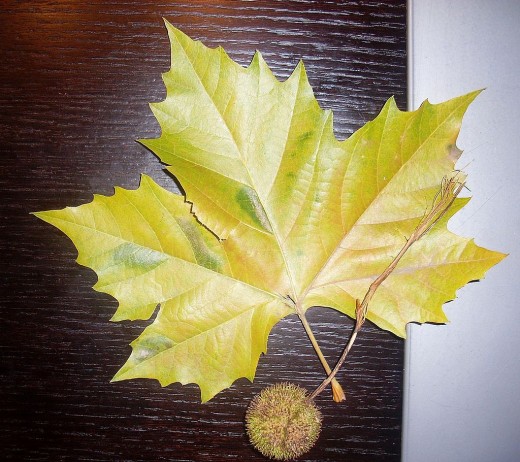 The manner in which the bark peels off in rectangular scales is very characteristic ,and, is perhaps ,a reason for the impunity with which the Plane tree thrived in the soot-ladened atmosphere of London in days gone by, and now, thriving even in the air pollution of heavy city traffic.

The bark by itself is sufficient to distinguish the Plane from the Sycamore Acer psuedo platanus ,with which it is often confused. However, the Sycamore has its leaves in opposite pairs and far less smooth, whilst during the summer and autumn they are often the Sycamore leaves are almost always marked with 'Tar-spot', a fungus that creates ink black spots or blotches.

The timber of the Plane is fine grained and of a brownish yellow oak colour ,somewhat resembling beech, prettily marked and well adapted for ornamental use. It was almost exclusively used by carriage-builders and piano forte-makers, for the sides of wagonettes and the bridges in the piano, the manner of which it 'takes paint' fitting it for the former purpose and the toughness and hardness ,by which the pins are securely held in the latter. When old, the wood sometimes has dark veins in it ,like those of the Walnut. 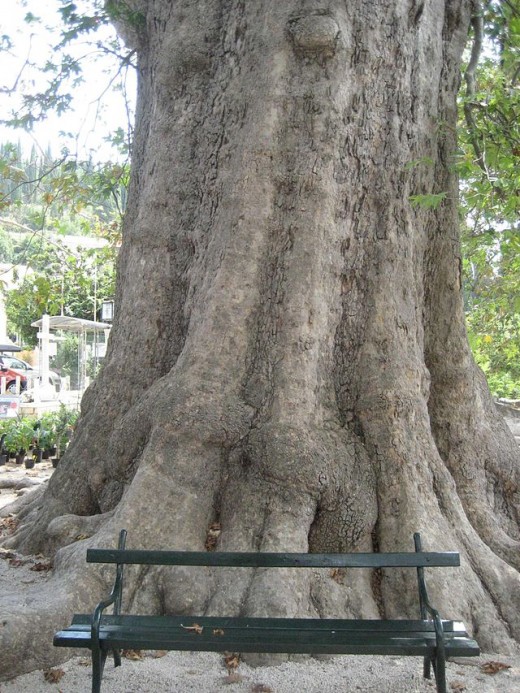 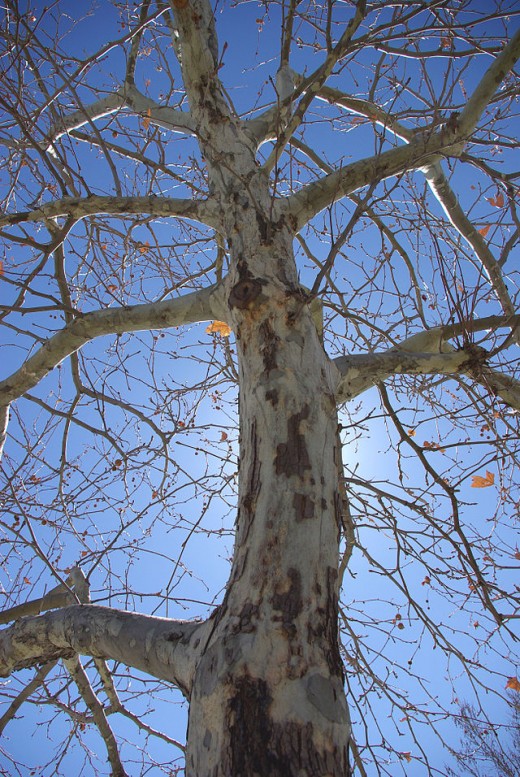 Ferdinand Mathews, in his book 'Familiar Trees and their Leaves'1896,relates the following information on Platanus occidentalis-" The buttonwood, which is also commonly, but quite improperly ,called Sycamore, is a tall, ruggedly handsome tree, which sometimes attains the height of one hundred and fifty feet.

" Gray, calls it our largest tree,and Whittier has made it celebrated in his poem entitles 'The Sycamore'. beneath its shade ,tradition has it Washington passed in his triumphal journey through the North in 1789, the year of his election to the presidency of the new nation, and to this day--

Still green ,and tall and stately

On the river's winding shores,

Surrounded by city sights and sounds and the old buttonwood trees. { it is said that under the trees, which form a green archway over the river road, Whittier conceived the plan of his poem, Skipper Ireson's  Ride.

" Kentucky is the favourite home of the Buttonwood and in its rich soil thrives far better than it does in the less fertile regions of the North. Beside the grave of Daniel Boone, in the cemetery at Frankfort,  stand several handsome trees,which although they are not very tall ,posses ample and graceful proportions."

" I remember as a child, several large buttonwoods on Washington Square in New York, the hollow trunk of one of them was the haunt of a gray squirrel, the pet of a policeman in charge of the park and of the children of the nieghborhood, but that particular tree has long since disappeared, and within a few feet of where it stood is now the beautiful white marble Washington Arch. The buttonwood attains its greatest proportions in the valleys of the Ohio and Mississippi Rivers where it is commonly seen over eighty feet tall " 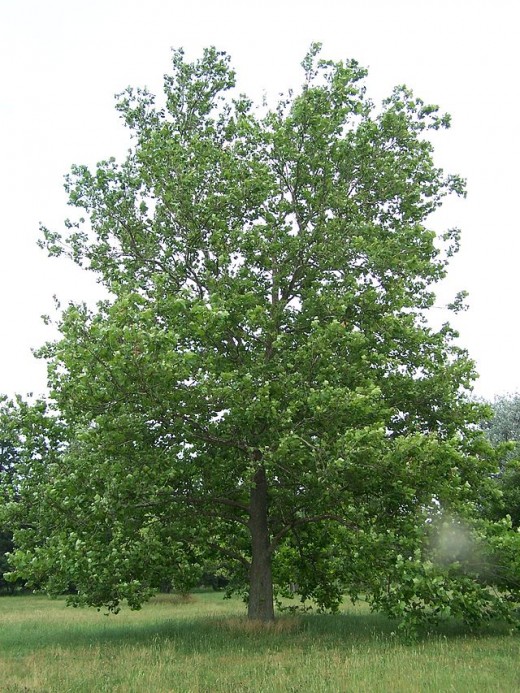 The pages on this page may be reused. However, the name of the relevant author must be attributed along with any accompanying license.