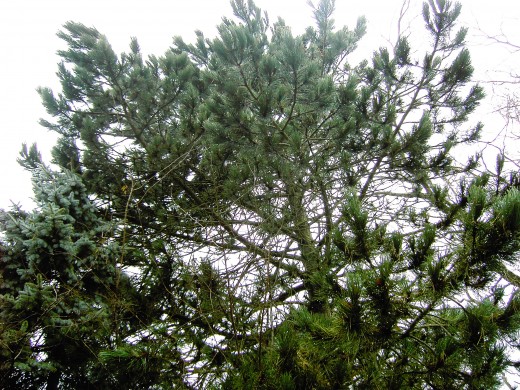 Many of my other pages cover species of deciduous trees that occur in the U.K., among which are the Rowan tree, the Ash tree, Sycamores and maples, the Mighty Oaks of England and the Hawthorn.  The series will look at the familiar conifers that tenant the wider countryside and / or in parks and large gardens.

The Scots pine Pinus sylvestris is a familiar tree to many people and once covered great areas of the Scottish Highlands where along with the birch formed the once mighty Caledonian forest. However, due to changes in land use, exploitation and other complex factors the once mighty forest is now but a mere shadow of its former greatness.

This species is now only native to Scotland and is the countries national tree. It once grew naturally in England and Wales until around 400 years ago, but due to mans' greed it was exploited to extinction. Today it is once again common due to the swathes of coniferous woodland planted throughout the U.K.. They have also been extensively planted in gardens and parks.

Pinus sylvestris can grow to the age of 250-300 years and there are records of them reaching a much longer life span than this. They grow to the height of 36m or more.

The shape of the tree varies depending on the growing situation and the proximity of other trees. Those growing in plantations for example where the trees are planted close together they grow straight and tall in a more natural habitat, they are more twisting and branching in habit.

On mature trees the bottom branches tend to be missing while on young trees they are branched almost to the ground. The trunk of the pine tree is very distinctive  the lower bark being reddish brown and deeply fissured. Higher up the trunk nature has coloured it with a glorious red orchre, with hints of pink.

Trunk of a winter tree 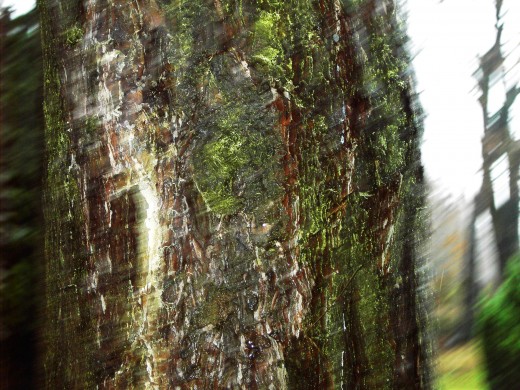 Trees in plantations tend to grow straight and tall. 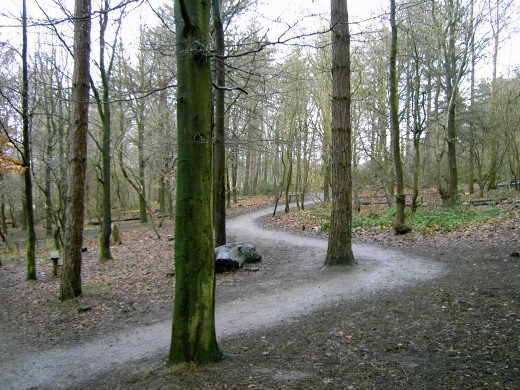 All pine trees have a sticky sap and this leaches out when the outer bark is damaged, the sap then is known as resin which is also referred to as pitch. The resin has been utilised in many ways { see the uses of pine below}

The sticky fluid when meeting with the air tends to harden in time and has a gently balsamic fragrance. The sap is the trees defence system and it serves important functions. It helps to repel insects from burrowing  into the inner sap wood {the xylem} and contains chemicals that help to deter fungal attacks. However, some insects such as certain wood moths, weevils and saw flies do penetrate the outer bark. It is then that the sticky sap seeps out and hardens. Thus the resin also acts as a wound dressing with its hard coat.

The amber gemstone is fossilized tree resin from trees that thrived millions of years ago and from ancient pines. The resin as indeed got to be millions of years old to be called amber. Recently hardened resin is referred to as being copals. The popular gemstone, when utilized as a component of jewelry, needs to be treated with care, for it is relatively soft and easily scratches.

Along the branches the shoots are light brown with spirally arranged with scale like patterning. On mature trees the foliage referred to as needles are of a blue green colour during spring and summer but often becomes darker green to yellowish green during the winter months. The occur in fascicles {from the Latin fasculis meaning a small bundle}in twos with a persistent grey basal sheath.

The Needles of Scotch Pine. 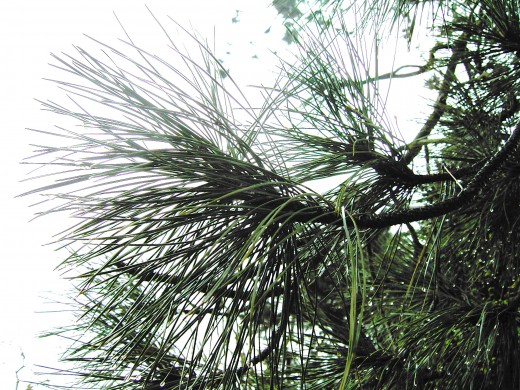 Needles and shoot. Note the scale- like structures on the shoot. 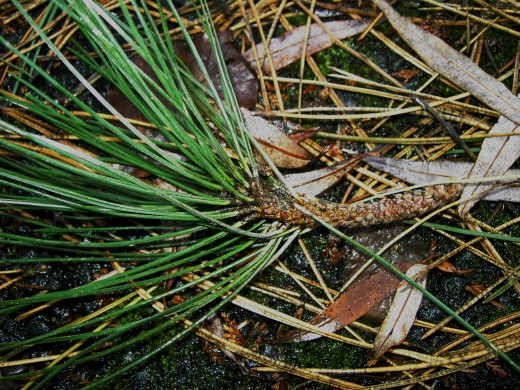 The needles of the pine are protected from frost by a substance that acts in the manner of anti freeze in motor vehicles. Much of the distinctive smell of pine is produced by this "anti freeze". The needles do drop as a walk through a pine wood will testify, however, the needle drop is part of a natural cycle. Some times the needles will appear yellowish before falling. They fall from the inner branches and not from the tips. { It is a certain sign of distress if the tip needles fall} The needles fall gradually and the tree always seems to appear in full leaf.

Who among , as a child, as not collected the pine cones ,or later in life utilized them as part of floral decorations, or at least purchased such displays, particularly at Christmas? They are present among such arrangements which are used in church yards and cemeteries  up and down the country on the graves of loved ones. 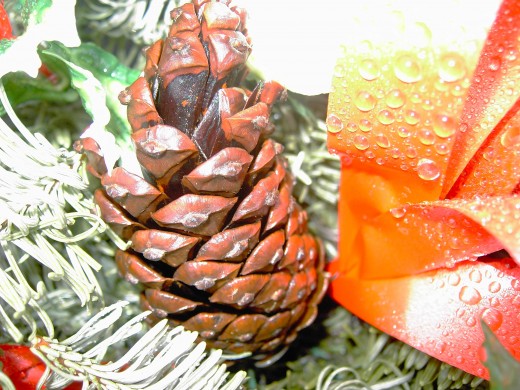 Each pine cone is either male or female. Male cones produce pollen and female cones produce ovules. The dry cones found beneath the trees are most likely to be female cones that have already released their seeds. Male cones are usually non-woody, their only function is to produce as much pollen as possible. It can take many years for the male cones to become mature enough to produce pollen. Female  cones develop from the ends of the branches. They harden to form scales. Of these there are two types the bract scales develop first to create a platform for the seed scales. The process of mature seeds which are then released takes up to two years. Thus it is probable that many different stages of development and colouring will occur on the same tree. The cones are green at first then pass through the different colours until they become the familiar muddy brown colour.

Pine cones are the staple diet of the endangered red squirrel here in the U.K.

The Uses of Pine

The native Americans have used pine resin, among other ailments, to treat rheumatism, for they were aware of its anti-flammatory properties. It has been utilised to treat burns and sores. Extracts from the resin with its balsamic fragrance has been used in rubbing oils, hair tonic, in Aromatherapy and perfumery. It is used in many other house hold items such as disinfectant.

Essential oils of pine have been employed in inhalents for respiritory ailments and to stimulate circulation. A once common home made tip was to put a handful of the needles in bath water which helps to east the symptoms  of rheumatism, and to help with circulation.

There are four examples of Pinus sylvestris according to the British Tree Registry that are classed as Champion Trees native to Britain and Ireland. One is situated at Mar Lodge Aberdeenshire Scotland, one at Muirward Wood, New Scone Perth and Kinross Scotland. There is another at the Abbeyleix Estate County Ross in Ireland and the last one at Ballogie Aberdeenshire.

World wide there are 115 species of pine. However, in the U.K. it is the Scots pine Pinus sylvestris that is the prolific pine tre

Scotch pine growing with a weeping willow in a garden. 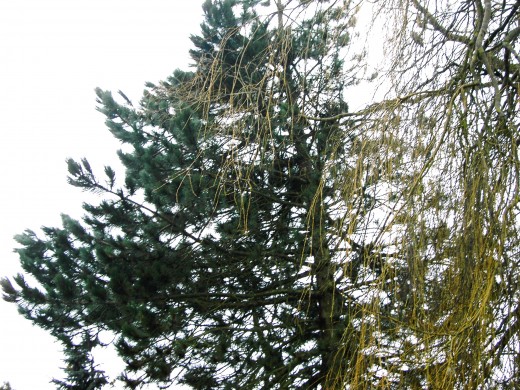 Images on this page may be reused. However, the name of the relevant author must be attributed along with any accompanying license.