Pine martens belong to the family Mustelidae a favourite family of mine. This family includes the Stoat, Weasel, Badger, Otter, Polecat and Ferret. The family belongs to the Order Carnivore. The Pine marten belongs to the genus Martes. This one of England's rarest mammals and one would need to travel to north western Scotland to find their remaining stronghold in the UK.

Historical evidence reveals that the Pine marten has been with us for 10,000 years, and up till 200 years ago it was still fairly common and widespread in mainland Britain. There are records of the Pine marten being regularly recorded very close to London. Their demise, is once again, down to man, in this case an upsurge in game-keeping saw these handsome members of the Mustelidae all but wiped of the wildlife map, and only small relic populations are thought to remain in the north of England { see conservation issues below}. Pine martens are solitary creatures for most of the year. They are three years old before they start breeding.

Description of the Pine marten

The Pine marten is about the size of a cat with a head and body length of 50-55 cm and a tail of 20-25 cm. The tail is thick, bushy and dark coloured. Adult males weigh between 1.2 and 1.7 kg adult females about 10% smaller.The ears are prominent and rounded , about 40mm long with light coloured edges. They are capable of rotating to pick up the tiniest sounds that betray the whereabouts of their prey.

The muzzle is quite long and narrow beneath which is a diagnostic cream coloured throat patch. Each animal has a slightly different creamy bib under its chin, which varies in size tint and shape. This enables individuals to be identified in the field.

The colour of the fur may vary considerably between individuals and also on the same animal as it undergoes it various moults. The legs are relatively short and the long claws help it to live its arboreal lifestyle. Juveniles are very similar to adults, however, the fur is shorter.

Pine martens are extremely agile when among the branches of their woodland home, however, they do come down to the ground to hunt. Their movement on the ground is a lazy bear-like gait. from this some what deceiving mannerism, they are capable of leaping in a cat like manner onto a tree trunk and up quickly among the branches when danger threatens.

Among the branches this agile creature uses the same cat like leaping movement when in pursuit of squirrels and other prey. regularly leaping up to 4 metres from tree to tree and they are capable of falling from 20 metres to the ground, landing on their feet unhurt.

Diet of the Pine marten

Spending , as they do, much of their time among the tree tops, these opportunist predators, often come across birds nests. In such encounters they will eat the eggs or any nestlings that are available to them. Like wise they may happen upon baby squirrels in their dreys which will also afford them an easy meal. That said, their main diet consists of voles and other small mammals including young rabbits, worms, insects and other invertebrates all taken from the ground. They will also take fruit in particular rowan berries.

In common with their relatives the stoat and weasel prey such as baby rabbits are despatched by a quick bite just behind the base of the scull, their needle sharp teeth usually means instant death to their victims. Food is also stored for future use.

Studies have revealed that male Pine martens have larger home ranges than the females bordered by natural boundaries such as streams or hedgerows. they may travel up to 10km per night  while hunting , marking their range with droppings known as scats, which are often left to warn other martens of their occupation

During the breeding season {July to August} , other males on the look out for mates may well stray into an occupied territory which results in acts of aggression. This aggression is usually portrayed by growls, hissing and spitting, rather than physical contact, each being aware of the damage their needle sharp teeth can inflict. as a rule the marten that has strayed into occupied territory will withdraw.

The litter is born in March or April of the following year. This is the result of " delayed implantation", the fertilised eggs cease to grow for some time . In the case of the Pine marten this period is about six months. {See Stoat}. When the eggs begin to develop again it takes roughly 30 days to complete the cycle.

The litter consists of up to five young which are born with a sparse covering of fur, each weighing about 30gms. They are fully dependent on their parents for food and warmth. They continue to grow in their dens which may be located in a hole in a tree or among rock crevices or even an old squirrel's drey.

At about six weeks of age their eyes open. At 10 weeks or so they venture into the wider world, carefully watched by their parents. The young become fully independent at around 4-5 months. At this stage they are very similar to the adults with the exception of the tail which is somewhat spindly, the thick fur, present in adults, will grow by the following year.

Their favoured habitat seems to be well wooded regions with areas of open grassland where they hunt for voles.

Pine martens in the UK are fully protected by the law under the Wildlife and Countryside Act 1981 {as amended}. they appear on Schedule 5 of the Act. { see Wildlife Law -1}. It is on the Red list of conservation concern and as such is classed as a priority species of conservation concern. The criteria involves a Species Action Plan { SAP}, which is currently being implemented where Pine martens occur.

My sources inform me that Pine martens are known to be living in Grizedale Forest in Cumbria. DNA tests have provided the first unequivocal  evidence for ten years that Pine martens inhabits this forest owned by the Forestry Commission. 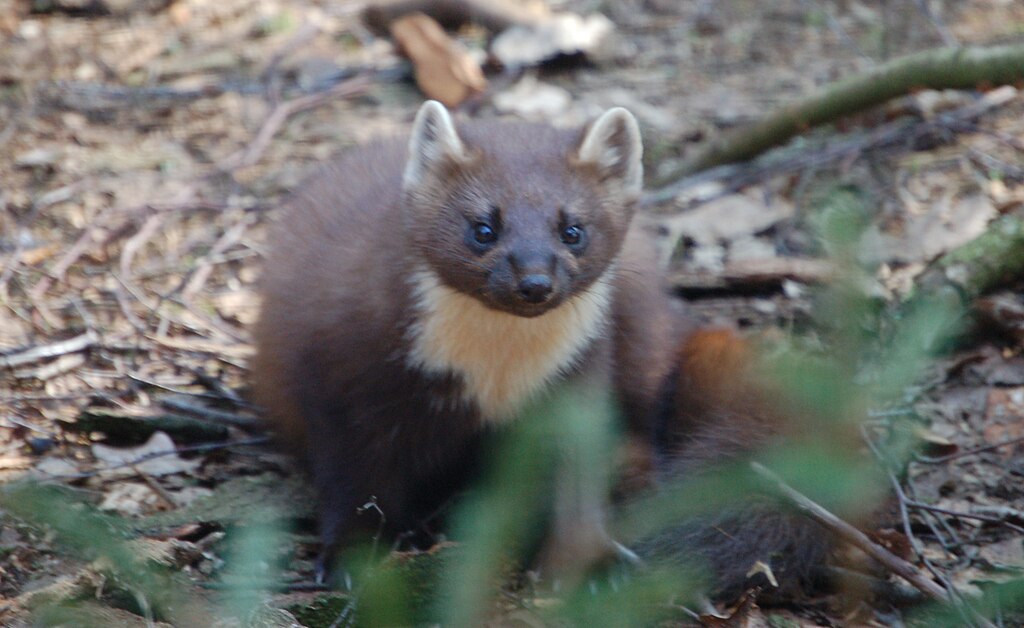 The DNA was taken from a scat which was sent to the Waterford Institute of Technology in Ireland who have tested over 1,000 scats for the Vincent Wildlife Trust over the last two years. Out of these 1,000 scats this is only the second one that has been identified as Pine marten. The other positive scat was found last year in Northumberland confirming their presence there.

There are also known populations of varying numbers occurring in Durham, Yorkshire and the Peak District. In Cumbria, apart from Grizedale Forest, they occur in the Rusland Valley and the forested dales to the west including Ennerdale.

A Pine Marten has been filmed in the wild in North Yorkshire. It is the first evidence of the mammal appearing there in thirty five years.