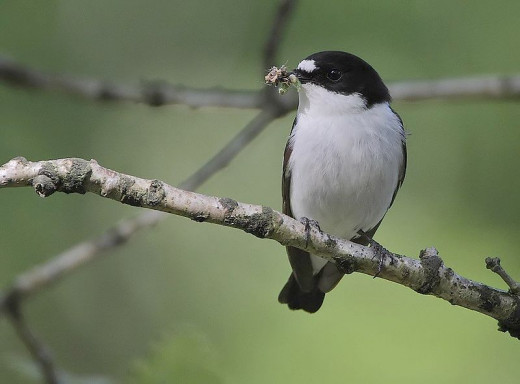 In the UK it is listed on the Amber list of conservation concern, {declines of between 25-50% over the last forty years or so}, due to recent declines.. There was an estimated 19,000 pairs in the summer of 2009. In Ireland it is also Amber listed due to very localized breeding populations, {just 10 known sites},and it is regarded as a rare summer visitor,and a scarce passage migrant in spring and autumn.

The Pied flycatcher breeds in Europe and N.W. Asia and winters in tropical Africa. The Gaelic name for the bird is Breacan-glas the Welsh,is Gwybedeg Brith and the Irish Cuilire Alabhreac.The above information is courtesy of the BTO. {European population estimates Birdlife}

Here we look at the species its lifestyle and habits with notes from past ornithologists and other eminent writers. as always we commence with a description of the subject under review. 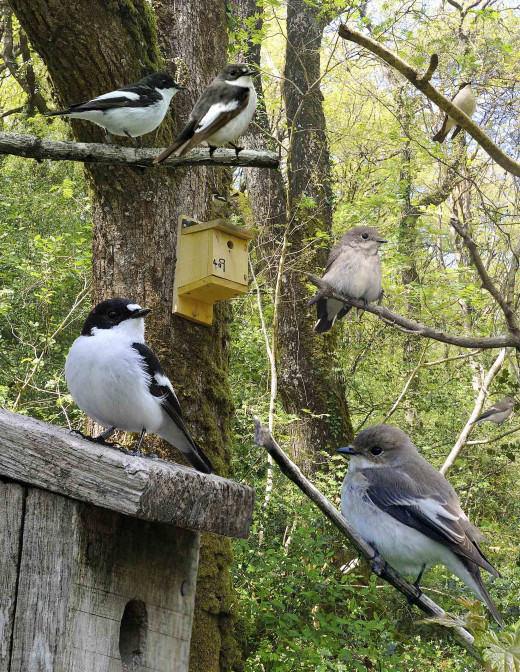 The male has one or two spots on the white forehead and general black and white plumage {in autumn it takes on the colouring similar to that of the female}.it has white underparts. The tail is black with white sides. When in flight the black wings show a bold white stripe. The female is olive brown above. The bill and feet are black the iris dark brown.

They are about 13 cm long {five and a quarter inches} and weigh 13 grams. In relation to their body size the wings are medium length, as is the tail,the neck is short , the bill short and the legs medium length.

They constantly flick their wings and tail. They have forays from a perch after insects,nearly always returning to a different perch. The male looks very white from the front and no other small black and white bird has its fly-catching habits. The hen and juvenile are somewhat similar to the female Chaffinch without white shoulder patch and can also be told from other small bird by its fly-catching habits.

In some parts of England it was once referred to as the 'Cold finch'. It is often mistaken for the Pied Wagtail {see my hub}, However, the tail of that bird is far longer and the habits of this species are quite different from those of that bird. It has also been referred to as the Epicurean warbler in days gone by. 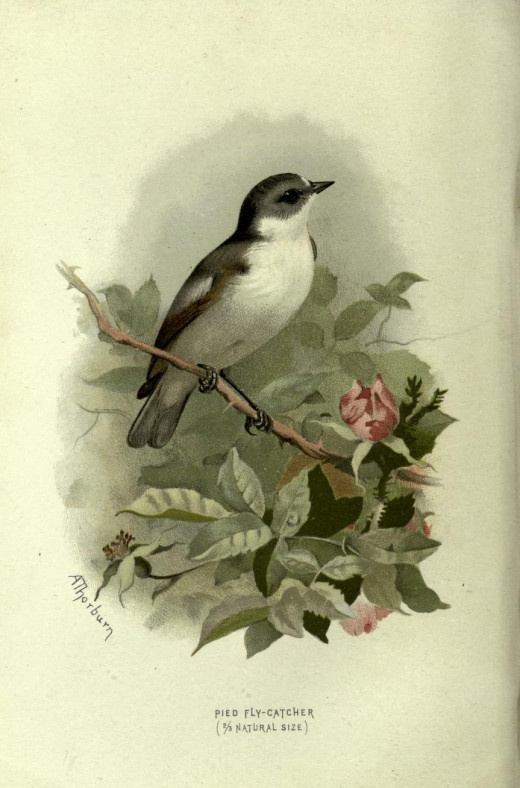 In the UK this species is much scarcer and very much more localized than its relative the Spotted flycatcher, especially during the breeding season. Here it frequents the the western and north western parts of the region,principally Wales, the Lake District and western regions of Scotland. It arrives on our coasts towards the end of April and the first eggs are usually encountered by about the middle of May. In the more northern parts of its range it may well be later than this.

This species haunts Atlantic oak woods and other woods that consist of Beech,Aspen or Chestnut. During my research I came across this charming account from Mr. Warde Fowler's book ' Summer Studies of Birds and Books'--" On the continent I always see him {the pied flycatcher} in such places that he loves in Wales,among the larger timbers on a Swiss mountainside or on the forest slopes of the Taunus Range. Just as the trout loves swiftly running streams, or as the Wood Wren is sure to be heard where the oak is the prevailing tree, so there are certain spots which you can distinctively find that this bird ought to have chosen for its habitation, and if you are in the right district, you may fairly wager that he will be found there. Such a spot, on the edge of the beech forests of Weisbaden, will always be a very clear outline in my memory, for it was there I first heard the song of this bird."

" It is very seldom now that I hear a song that is quite new to me. If it were not that so many of our songsters sing all too short a time, and that when they tune up one by one for the orchestra of the spring season each instrument touches the ear, with the fresh delight of recognition, I might feel as much at the end of my tether as the mountaineer who has no more peaks to climb. But the song was not only new, but wonderfully sweet and striking something like the Redstart. There is but one way of learning a birds song , and that is by listening to it in solitude again and again, until you have associated it in your mind ,with the form and habits and haunts of the singer"

The food of the Pied flycatcher consists largely of insect, but it rarely, if ever, pursues them in the air like the Spotted flycatcher, preferring to watch them from the end of a branch and pounce down suddenly upon them, particularly small beetles. { the wings of these small beetles are frequently found in the pellets of undigested matter ejected by this and other insectivorous birds}. A large volume of caterpillars are also taken when there is a family to feed. it will also add such fruits as currents, raspberries,and elderberries to its diet as the summer passes into autumn.

Coward in his book 'The Birds of Cheshire', writes " The pied flycatcher has been occasionally observed in Cheshire { the southern most part of north west England}, but only as a passage migrant. One was seen in a wood at Burton on April 30th 1867 and another was noted at Thornleigh near Chester on May 5th 1884 " On the same day in the following year Coward watched a male in a covert at Birkin Heath Ashley. I add this to demonstrate that birders can observe this species,before they move on to their traditional breeding territories, at certain times of the year {spring and autumn} in almost any part of the country.

Before the law was changed to protect wild birds they were regularly caught to keep in aviaries and cages. Here are some historical notes from such times.

Far more handsome than its commoner relative the Spotted flycatcher and with a much more appreciated song, it is not surprising that this species was prized as a cage bird, yet according to Butler 1907, he had never seen one exhibited in England. However, he adds that in Germany the Pied flycatcher had put in an appearance at the exhibitions of the 'Ornis' Society.

Being much less common in Great Britain than its relative the Spotted flycatcher the species seems to have been less frequently obtained at the right age for hand rearing..However, when one was obtained Swaysland Assures us that it is far more easy to keep than the commoner species, And may be turned into cage or aviary, and fed in the same way as warblers or as the nightingale. he also adds that when tamed they show a great attachment and familiarity to its owner.

Bonhote states, " In Captivity, they should be fed on ant eggs,and hard boiled eggs,mixed in equal parts,and as many meal worms as their keeper can afford to give them. They become very tame, and will rise in the air and catch meal worms as they are thrown at them. In catching a meal worm, they leave the perch, hover in the air,watching for the meal worm to drop, and catch it as it passes them, if they should miss it, they follow it closely and catch it as soon as it reaches the ground" 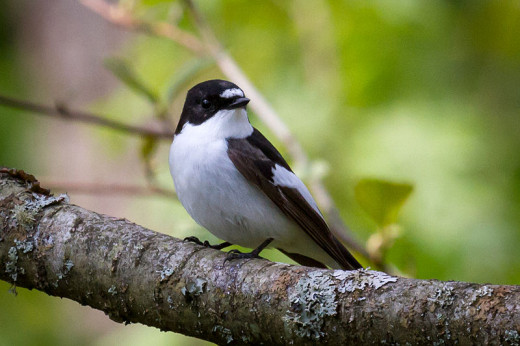 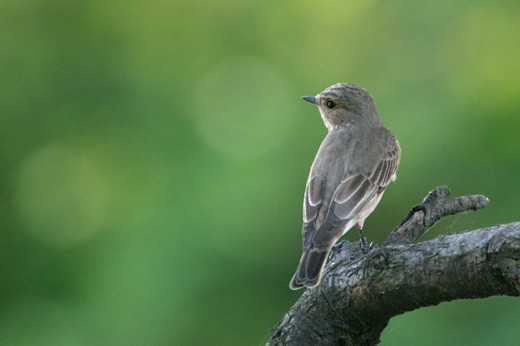 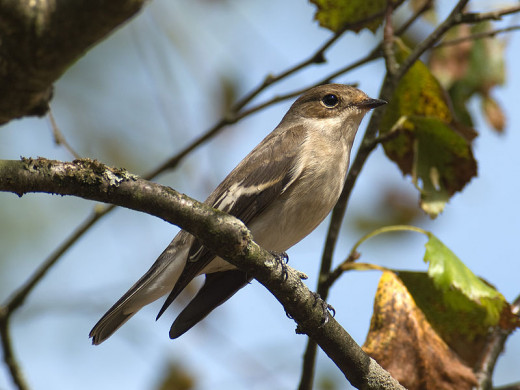 This quality image is courtesy of OhWey CC BY-SA 2.5 license.

Unlike its relative the Spotted flycatcher, this species always nest in holes, either in a tree trunk , rock,wall or bridge, especially when built over water. Deserted nesting holes of woodpecker or tits are sometimes utilized and more recently nest boxes that have been situated in a favourable locality. Lilford observes the nest is generally situated in a hole of a pollard willow, or other tree, often in an old wall;in fact very much the same locality that we should look for the nest of the common Redstart. the birds tend to nest in the same place for successive years.

Before describing the nest itself I relate a curious circumstance recorded in the 'Annals and Magazine of Natural History' for March 1845,by John Blackwell Esq of Hondre House Denbighshire {Wales}, of a pair of pied flycatchers which built close to the Portico over the hall door, having been debarred entrance to the hole in which their nest was, by a swarm of bees, the latter completed the wrong by stinging their young ones to death" This tragedy occurred on the 18th of June,1843.

The nest of the pied flycatcher is somewhat loosely constructed of dry bents, rootlets and moss and chips of bark., lined with feathers and sometimes hair. It is often situated high up in trees but sometimes only a few feet from the ground.

The eggs which number six or seven are small and oval, nearly white ,but sometimes a bluish green. They are incubated by the female for 13-15 days. the nourishing diet of insects, especially caterpillars see the chicks, which are born naked ,blind and helpless grow and become ready to leave the nest in around a further 16-17 days.

The first feathers of the young are much mottled over by dull white spots on the back and with brown on the breast. When a year old the bill is black, brown at the base, a dusty steak descends from it along the sides of the neck. The iris is brown. The forehead as much less white and more dull, the head,crown, neck and nape , grey tinged with brown. The chin and throat is white or yellowish white. The breast is the same tinged with grey or brown on the sides.

Eggs of the Pied flycatcher. 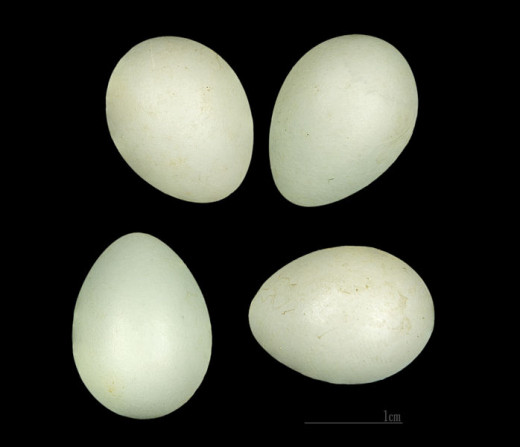 UK -Red List priority species due to declines in population/distribution of over 50% in the last forty years or so.