The otters belong to the Carnivores and are placed in the Family Mustelidae and the genus Lutra. Within the Carnivores they belong to the group which are digitigrade that is to say animals that walk on their toes,but which differ from the dog and cat families in the form of their bodies, which are long and flexible, and low on their legs, on which account they were once described as being vermiform { or worm like}

The sinewy body, characteristic of the Mustelidae animals, allows the otter to pass through small openings and pursue prey that is not accessible to other tribes of Carnivores. In some respects otters resemble the martens and polecats yet differs in other respects.

The characters of the teeth are , three false grinders in each side, above and below, and a very strong talus, or heel, to the carnivorous tooth in the upper jaw. The head of the otter is compressed, and the tongue is a little rough , somewhere in-between the texture of those of the cat and dog.

The main differences that otters differ from Martens and Polecats are those of the feet and tail. The former being webbed and adapted for swimming and the latter flattened horizontally. otters are aquatic in their habits and feed, in the main, on fish, but they do occasionally they will prey on creatures, which like themselves inhabit the banks of rivers, streams and lakes. They are bold and strong animals in proportion to their size, their bite is very keen and determined and they are resolute both in pursuit of their prey and defending themselves when they are attacked

Although the teeth of the otter bear a great resemblance to those of the Martens, yet the crowns of the cheek teeth are so formed as to be better adapted for bruising and grinding their food rather than cutting it. The teeth are adapted to eat the flesh of fish which is a lot less fibrous and certainly less tough than the flesh of the warm blooded animals which are the prey of Martens and Polecats.

The flattened tail possessed by the otter is common to all for footed mammals which swim in water and pursue their prey there. The otter's tail is designed to propel the animal up and down rather than forward { that motion is driven by the feet}. The tail is covered with longer coarse fur than the rest of the body. There is generally speaking two kinds of fur, the one consisting of shining hairs, which are longer and thicker than the rest, and generally of a brownish colour, and the other type woolly, shorter, much thicker and generally greyish.

All species of otter have muzzles more or less developed with long facial whiskers. The soles of the forefeet are quite naked but on the hind ones the heel is covered by fur. The otter is not amphibious in the true sense of the word, as is generally thought, indeed no mammals are capable of breathing air and water at the same stage of their existence, however, the habits of the otter require that it should be longer under the water for breathe less frequently than other mammals. Otters of all species reside in burrows known as Holts, opening as near the water as possible and very often concealed under a hanging or projecting bank. When they take to water for the purpose of fishing they always swim against the stream. Fish when at rest or waiting for food tend to have their heads up the water. The otter can then come upon them unobserved and seize them. They seem indifferent both to cold and to moisture. The fur has the same water proofing as the feathers of diving birds in not becoming wetted. because the otter spends a great deal of time either in water, or in cold and humid holts by the side of water they do not know a very great change in temperature. They are as a consequence found in countries that are relatively cold. When frost freezes the water ways for a very long period of time and the otters are frozen out they were once persecuted by hunters taking advantage of the situation. They were tenaciously hunted for their valuable skins, in some regions of the UK they hunted to the point of extinction. 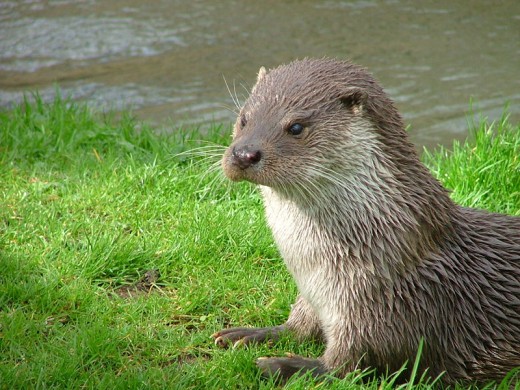 The head is broad and flat from above, the face short, the black eyes small but bright and the ears rounded and hairy. the ears are closed when under water. The legs are short and powerful and all the feet are fully webbed. there are five toes on each foot with short pointed claws those on the hind feet flat and nail like. The tail is somewhat flattened from the sides and forms a most efficient rudder. Below its thick base there are glands which are capable of secreting a fetid fluid.

At a distance this graceful mammal appears to be of a uniform dusky brown. The weight of a full grown otter-the male 20-25 lbs occasionally exceeding 27 lbs, the female weighs less than the male of about 4lbs. A full grown otter measures about two feet and the tail around 18 inches. The chin and throat tend to have white fur. On the river bank the otter may have an upright stance balancing on its hind feet and tail.The male otter is known as the dog. The female otter, bitch and the young -pup.

The European otter is found in most countries of Europe and is the only species in this part of the world. The nostrils are provided with an apparatus which prevents water from entering when an animal is speedily moving along. The apparatus consists of membranous valves, which are kept closed by the pressure of the water and that they can be kept so is another reason the otter tends to swim against the current.

Although this mechanism is good for short periods,it is only a temporary devise, for if the otter is kept under water for any length of time, as for an example getting tangled in fishing nets, or other unnatural means, it will drown with the same certainty as any other air breathing mammal, not by water getting into the lungs but by strangulation for the want of oxygen. most dives lasr for less than a minute, but an otter is capable of staying under water for as long as four minutes and of swimming four hundred metres without resurfacing.

The eyes of the otter are relatively small. The small eyes are less likely to suffer injury, or be strained by water pressure than a large one would be, and the eyes are the chief organs used by the otter in locating prey. The holt or dwelling place is sometimes a natural cavity of the earth, but more frequently it is artificial and with an opening at or just beneath the waters surface. it is usually located a little below that part of the river where the fish lie. Although the dwelling of the otter is always in moist situations the animal forms a regular nest of grass at the bottom of it, more especially at breeding time.

Large carp such as these are a substantial meal for an otter. 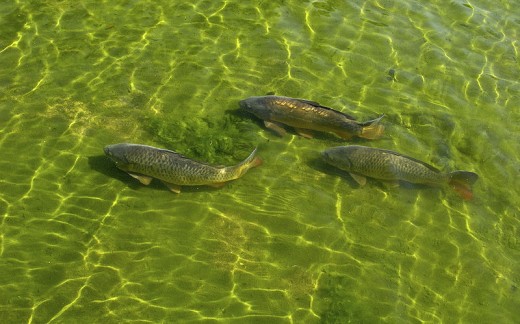 The gestation period is about nine weeks and the litter consists of four to five pups. they are blind at birth covered with a fine downy fur. they usually appear about April and once they are capable of looking after themselves the dog otter goes off to live by himself. The young reach maturity at two years of age.

if the otter has to leave the river as for example as previously mentioned by being frozen out the otter is capable of finding prey on land, such as water birds including the moorhen and other animals that share the banks where the otter roams. The presence of this nocturnal mammal may be realised by keeping a close observation of the mud where the paw prints may be encountered close to the holt where the otter curls up for the day in the manner of a dog with its tail around its face. The droppings too, known as spraints, are also evidence of where the otters are active.

About the time of sunset, the otter wakes up, utters his flute like whistle, enters the water and begins his quest for fish. having secured one in the water it will bring them onto land for consumption. Graceful and fast in the water it is no less swift on land and it is estimated that they can cover about 15km per night. Otters do not hibernate in winter.

I will conclude by taking an extract from the book " Birds, Beasts and Fishes of the Norfolk Broadland " published in 1895, the author states the following about his observations of the otter----" Perhaps one of their most astonishing habits is their habit of progressing along frozen dikes. They swim along under the ice for some yards and bump their head up against the glaze, breaking a hole from seven to ten inches wide, and this in ice up to three quarters of an inch thickness. Should the ice be brittle, the blow holes will be larger" and the most poetical time of the otters life is mayhap in early spring, when he lies in his warm, reed-leaf nest, cosily hidden in the hot moist thicket of budding sallows' and white sprayed blossom of blackthorn, listening to the rustling of tall, pale dead grasses round him, or to the buzzing of the black and yellow bees, and the blue-tit's song as they hunt over the sweet scented sallow buds for pollen and insects; and mayhap too they hear the red-legs calling from far across the level green marshlands"

Otter resting on a bank 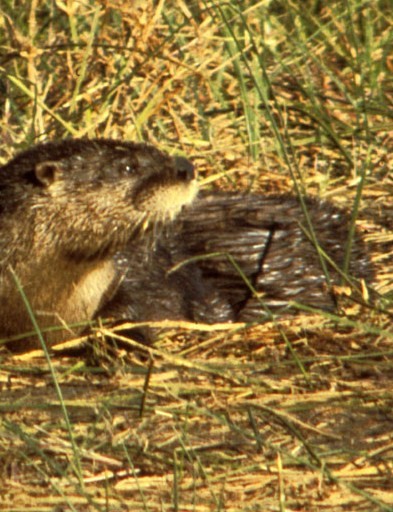 Courtesy of the USFWS. Public domain.

A bonded pair of otters. 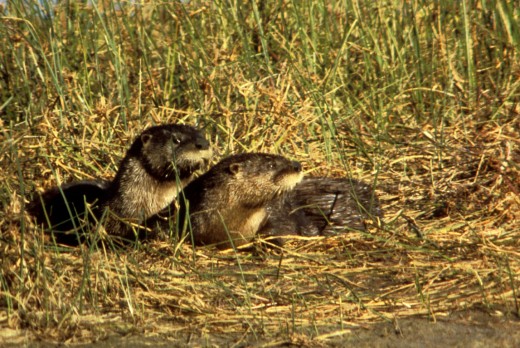 Courtesy of the USFWS. Public domain.

As previously stated the otter in the UK was almost hunted to extinction in many regions by hunting for the purpose of obtaining their valuable skins. Conservation efforts saw a rise in population numbers for a period then came another population set back. Rivers became uninhabitable for otters due to pollution that plagued our water systems for decades.

However, European regulations, greater awareness, the ban of certain agricultural pesticides and fertilisers that "ran off" into rivers, better management of riparian habitat { often as part of a local Species Action Plan} and protection under schedule five of the Wildlife and Countryside Act 1981 have all helped to bring otters back to the rivers throughout the UK. Much more work needs, indeed, is being done on behalf of the otters. Habitat is being managed better to suit the needs of the otter { and other riparian animals} and Herculean attempts are being made to make pollution in our waterways a thing of the past. 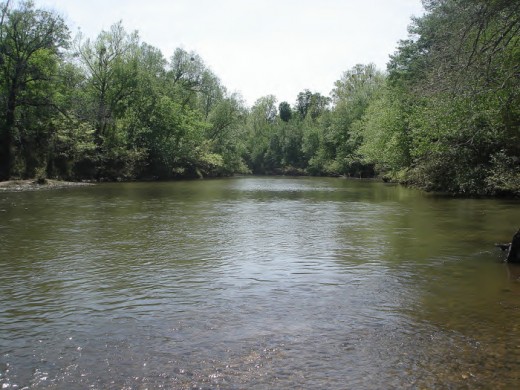