They belong to the order Asparagales of which there are sub-families of the large family Orchidaceae these are the Apostasioideae, Cypripedioideae, Orchidaceae and Vanilloideae. here in the UK there are 50 known species which grow in a variety of diverse habitats from mountain bogs to dry chalk steps. Orchids are monocotyledons {  seedlings that produce just one leaf} most flowering plants and native trees are Dicotyledons { seedlings that produce two leaves}.

Orchidaceae consist of several genera. many of them have flowers which imitate insects or invertebrates such as the fly and bee orchids which in turn attract insects. The seeds of orchids are dust-like and compared with many flowering plants incredibly small. A plethora of seeds are produced in a capsule that dries out on maturity and spits length wise the seeds are dispersed by the wind.

Another fascinating factor to the well being of orchid survival is their reliance on a fungi known as Mycorrhiza. The seed needs to be infected by the fungi or they will not develop into a flowering plant. In their natural habitat. Thus digging up and orchid { which is illegal} is of little use. It would not survive in a container or garden where this fungi is absent.

The seed will have spent a year at least beneath the surface of the soil before any above ground growth appears. Even from this stage to that stage of producing flowers may take a long period of time. as for an example the burnt orchid {or dwarf orchid} has been known to take 14 years from seedling to flower. Some species of orchids in Britain are rare or threatened {see BAP species below}. The Lady's slipper orchid discovered in Yorkshire in the 1640s, was relatively common being encountered in subsequent years in Derbyshire, Yorkshire,Durham, Northumberland and Cumbria. However, due to collectors both professional and  laymen the species was brought to the brink of extinction, indeed there was only a single plant known to exist in Yorkshire.

Conservation to save the plant and to raise others from it was undertaken on a "need to know " basis. Thankfully other plants were raised and eventually reintroduced to favourable localities. However, even today , the whereabouts of these plants are kept relatively secret.

In this article we review the species that are comparatively common both in number and distribution, but non-the-less beautiful, We begin with the marsh orchids belonging to the genus Dactylorhiza from the Greek dactylos meaning a finger + rhiza meaning a root, alluding to the finger like tubers of these species. They are a very complex group as far as identification is concerned  for they freely hybridise with each other and other species. so much so that even botanists with acquired skills have difficulty recognising certain hybrids.

This robust species is widespread throughout  southern England and in particular the south east, spreading northwards to north Yorkshire, however they are absent in Scotland and Ireland. It may be encountered on fens, wet meadows, dune slacks damp meadows and roadside verges although they tend to avoid truly acid soils. It flowers from June until mid July. They can attain the height of 70 cm.

The foliage consists of 5-9 broad, flat, unspotted greyish green basal leaves. there are also sheathing stem leaves which reduce greatly in size to the point where they become bracts.

The flower head referred to as the flower spike may contain more than 100 individual flowers which may vary in colour from pale lilac mauve-through to purplish red. The lateral sepals are spreading, however, they become erect as the flower matures. The upper sepal and petals form a loose hood. the lip is broad, sometimes even spoon shaped., which is scarcely three lobed. They have a pale central zone, marked with small dots or spots. The spur behind the flower is relatively thick, finger shaped and are sometimes bent or curved downwards.

The southern marsh orchid  hybridises freely with both the common and heath spotted orchids along with the early northern and narrow leaved marsh orchids.

This species the northern marsh orchid is a further demonstration of how confusing identification can prove to be. it is found as two sub-species.

Sub species purpurella is a robust plant attaining the height of 10-35 cm. The foliage consists of four to six, broad,glaucos green basal leaves which are usually unspotted. In addition there are some sheathing pointed stem leaves. However, there may be a few fine spots or blotches towards the apex of the basal leaves.

The flower spike consists of  10-40  bright purple to dull purplish red individual flowers which form a dense squarish head. each flower is heavily marked with lines or spots. The lateral sepals are erect, the upper sepal and petals forming a loose hood. The lip is diamond shaped and is also heavily marked. The spur at the rear of the flower is thick and of a conical shape.

The sub-species majaliformis tends to be an even more robust plant and taller than the former. The foliage of this orchid is heavily spotted with a dull violet colour. The sepals and the petals are longer and pinkish purple, the lip of this species is very distinctly three lobed.

The northern marsh orchid hybridises freely with common and heath spotted orchid and other species which often leads to confusion. The sub-species purpurella is very widely distributed in western and north west Britain { in Ireland it is found mainly in the north}. The sub-species majaliformis tends to be encountered close to the sea, in dune slacks and damp pastures.

Now we review the very popular bee orchid a plant which can not fail to bring joy to plant enthusiasts who encounter it in flower. This well loved orchid has 5-6 grey-green sharp-strapped shaped basal leaves which by flowering time often appears scorched at their tips. 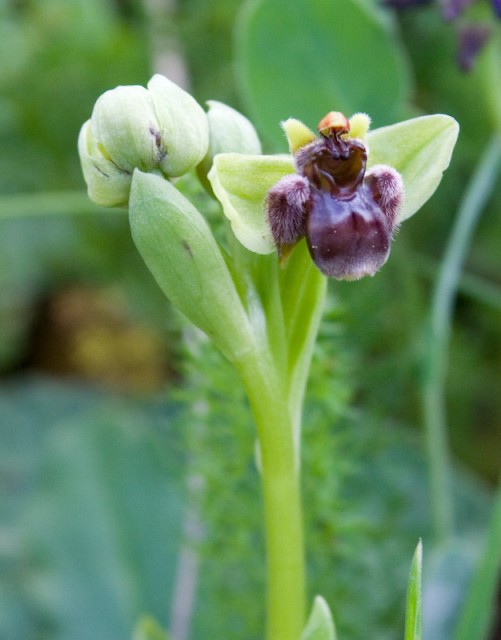 They also bear two stem leaves and many long leaf-like bracts. The stem rises up to a height of 15-30 cm. Bee orchids 2-7 flowers very rarely more. The flowers are said. resemble a fat bumblebee. They have three erect pinkish coloured sepals, and close observation will reveal each are marked with three greenish coloured veins.

The upper petals are brown in colour with in-rolled margins so that they appear to be cylindrical. The lip is three lobed of a rich red brown colour.the central lobe id round and convex and has a velvety texture with u-shaped bands of dark brown and gold at the base. The side lobes form rounded furry humps. These Orchids hybridise with fly orchids.

They grow in a wide variety of habitat, on chalk, clay grassland, Scrub, sand dunes, limestone pavement, roadside verges, and abandoned quarries. it is an active coloniser which are self pollinating, but may be assisted by bumblebees. They flower June to mid July. Bee orchids belong to the Orchideae and the sub family Orchidinae and the genus Orchis from the Greek word for testicles alluding to the root formation, a pair of tuberous roots.

All of the above have been used medicinally in the past.

Most orchids, native to this country have tuberous roots full of a substance called bassorine. Extracts from the tubers were once commonly used to make a nutrient drink, and was sold on stalls in the streets and was held in great repute in herbal medicine being employed as a strengthening and demulcent agent.

Tubers required for herbal medicine were taken at the close of the summer when the seed vessels are fully formed, as the following years tubers then contain the largest amount of bassorine, and are full and fleshy. These fleshy tubers were then washed and immersed in boiling water for a short time to destroy the bitterness of their fresh state and it also helps in the process of drying. The outer skins were then rubbed off and the tubers dried. the last stage of this process was to expose them to the fresh air to harden them.

The tubers were generally ground to a powder which had a yellowish colour. It was used to treat, among other afflictions,gastro-intestinal problems. Culpeper, the 17th century herbalist says of Orchis--" The roots are to be used with discretion. They hath each of them a double root within, some of them round, in others like a hand, These year after year when one riseth and waxes full the other perisheth. They are hot and moist in operation and provoke lust exceedingly. They kill worms in children. Being bruised and applied they heal the King's Evil"

In his Book Food for Free, { 1972} Richard Mabey states the tubers contain a starch like substance called bassorine which has in it more nutritive matter than any other single plant product, one ounze being sufficient to sustain a man for a whole day.

The above information is for historical reference. Anyone thinking of using herbs for herbal preparations for the first time is well advised to click on Wild Herb Advise in the content banners on the right hand side of this page.

The following species are subject to species action plans { SAPs} due to them being rare or scarce in their distribution.

Associated pages--Click on the content banner at the top of this page. Scroll down to view.

Links--Beautiful Orchids and other grassland flora, click on links banner. Scroll down to Box click. This is a direct link to the article.

Flora via links. Click on the Links banner at the top of this page. Scroll down to relevant box. Click this is a direct link to the article. Includes the series Past and Present Medicinal Uses.