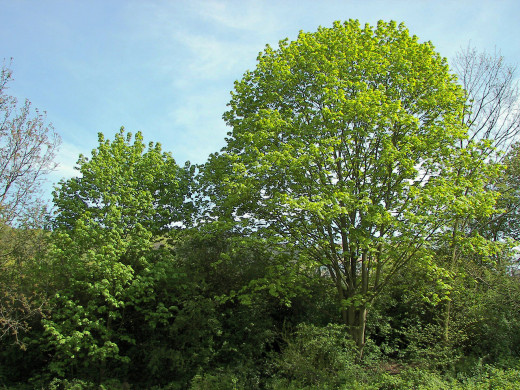 In this series a  'Study of Trees' in which I endeavour to give identification tips on how to recognize trees, for those readers that are not familiar with the various species. Most people begin their recognizing trees by their leaves and their form and colour. This is a good place to start and is fine during the summer months before the leaves fall and leave the branches naked and bare.

All trees have their own characteristic{s} which help the observant to recognize trees even in the depths of winter. Here in this latest article we review the Norway maple and close relations. The text will be descriptive and will be accompanied by images throughout to give the reader a clearer guide to tree identification.

The Norway maple belongs to the order of trees known as the Sapindales and the family Saponidaceae within that family. They are placed in the genus Acer and have been allocated the specific name of platanoides.

I have chosen the Norway maple, not only because it is a fine tree, but because it is one of the few introductions of Maple that thrive so well in our climate here in the UK attaining the height of the sycamore in as many years. It has been widely planted in parks and gardens and has found a place in our woodland scenery. The wood being fine grained,firm and takes a fine polish,and frequently exhibits those beautiful appearances in the direction and disposition of the fibre,for which the Bird's eye maples of America is so highly prized and sought after. Birds eye is a type of figure that occurs in several kinds of hard wood most noticeably the hard maples such as the Sugar maple Acer sachurum. It is a distinctive pattern that resembles tiny swirling eyes disrupting the smooth lines of the grain. { In North America there are 13 native species of Maple}

Patterning known as 'bird's eye' appears in the wood of hard wood maples. 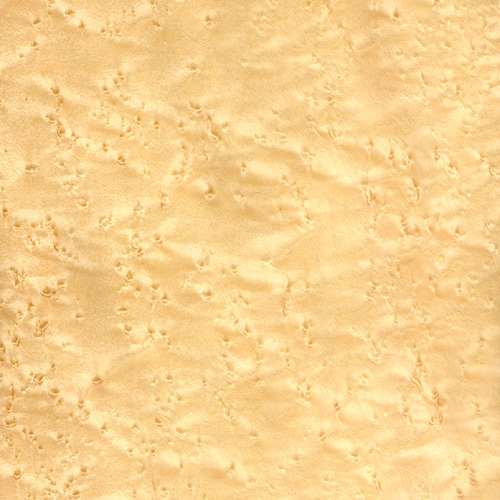 Leaf and green fruit of the Norway maple. 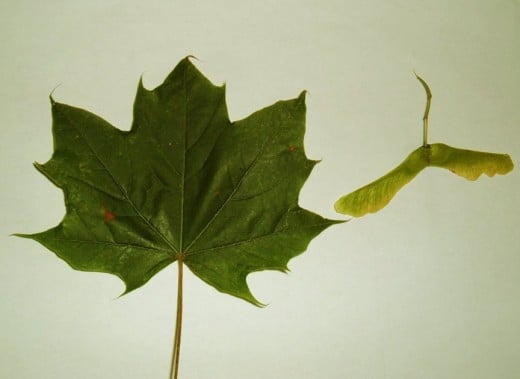 The Norway maple is a native to Europe and as its common name suggests it is found as far north and west as Norway. It is also met with in France,Switzerland and Germany and eastward to Russia.

The Louden, 'Arboretum Britannium' observed it in 1814 " In all woods bordering the public road from Wilna to Mittau,and from Moscow to Gallica", Louden further adds " Next to the birch and trembling poplar {aspen} it seemed to be the most abundant tree in Russian woods"

The sap of the species,like that of most of its congeners contains a considerable portion of Saccharine matter and sugar was sometimes made from it. In Norway and Sweden it flows in less abundance than that of the Sycamore, but contains more of the saccharine principle in a given quantity of the sap of the Sycamore.

In the USA,the UK,and many other countries landscapers have extensively planted the tree for its shade,as an ornamental and as a street tree. It is very tolerant of city pollution. It often escapes into the wider countryside to become established. 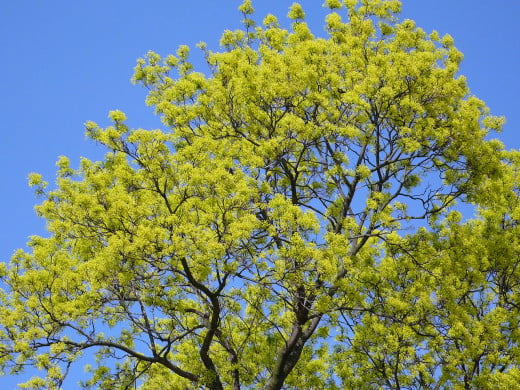 Description of the Norway Maple.

Upon a rich ,free soil it grows with rapidity and luxuriance and they even thrive on soils of an inferior quality providing they are not to wet. It is capable of withstanding the effects of a sea breeze,which it is found to do so on the western coast of Scotland, as well as upon the shores of the Baltic and western coasts of Norway.

The foliage, though not so heavy and massive as that of the sycamore is umbrageous {provides shade}. The leaves which in shape bear a striking resemblance to those of Platanus occidentalis { American Sycamore or Buttonwood} , are large, with long slender stalks,and when fully expanded,of a fine,shining,lightish green. In an early or half expanded state they are of a delicate yellowish green and in autumn , before they fall, become a rich warm yellow colour.

In common with sycamore foliage they are vulnerable to the fungus commonly known as Tar spot. 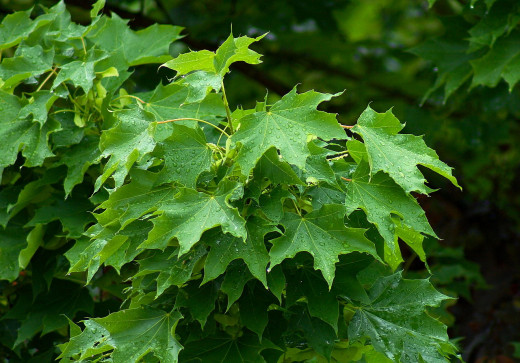 Shoots and buds of the Norway maple. 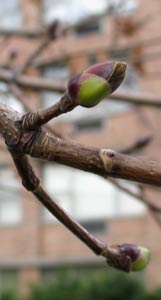 The roots of the Norway maple grow close to the surface which tend to starve other species of flora of moisture,with exception perhaps of the ivy. It is claimed that the roots release chemicals that inhibit other flora growth,however, this is far from being proven.

The bark of the Norway maple is grey to brown and it becomes rough and fissured into narrow ridges on older trees. On young trees the bark is smoother and just faintly striped.

The twigs are at first green becoming light brown with white specks,shiny and producing red brown buds. The buds are opposite on the stem,almost turban shaped grouped in threes with two side buds and a terminal larger one.

Mature trunk of the Norway maple. 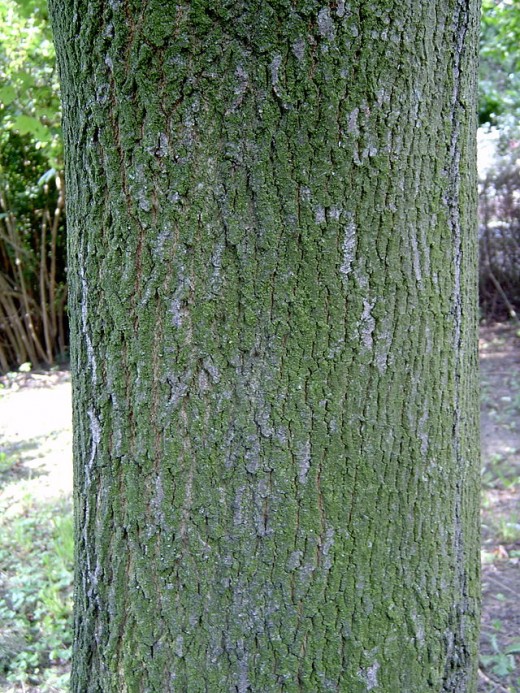 Flowers and fruits of the Norway Maple.

The flowers are grouped together in what botanists refer to as corymbs, of between twelve and thirty together. They are yellow-green in colour with five sepals and five petals three to four millimeters long.

The flowers occur in early spring before the new leaves emerge. They are sweetly scented and are sought after bees and other early flying insects.

The seeds of the Norway maple are flattened ,while those of the American sycamore are much more globose. The fruit is a double samara with two winged seeds. The seeds are disc-shaped and also strongly flattened. The wings are three to five centimeters long, widely spread,approaching a 180 degree angle. { other species of maple have wings that tend to droop, Some may remain on the tree over winter}.

It typically produces large quantities of viable seeds. The seeds are fertile when the tree has reached the age of eighteen to twenty years of age.

Flowers of the Norway Maple. 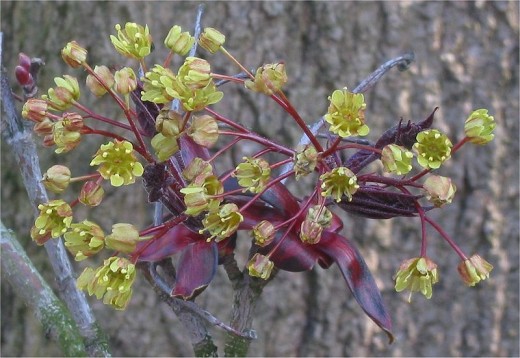 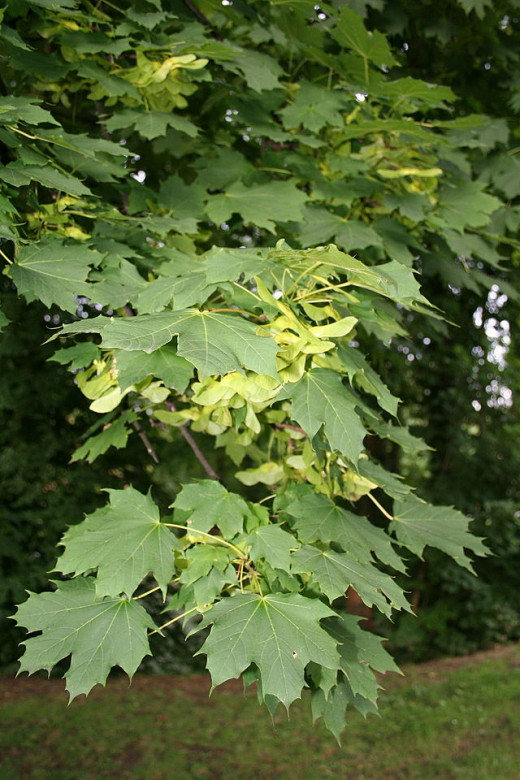 The ripe fruits of the Norway Maple. 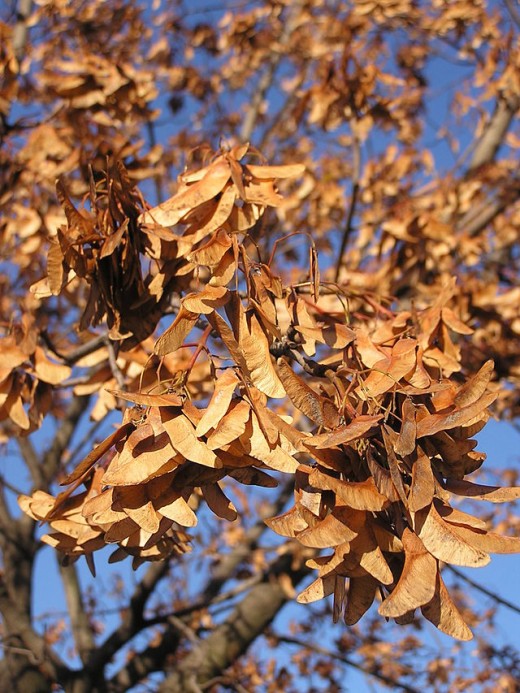 In North America the Norway maple is considered to be an invasive species especially in places such as Vermont's Forest. Unlike American native species they host very few native caterpillars which in turn reduces an important food source for birds. Native mammals do not recognize the tree's seeds as a food source,which germinate easily and hence take up ground which would otherwise host native species of trees /flora.

It is one of the few non-native species to successfully invade and colonize a virgin forest. In the UK and other countries many species of Lepidoptera feed on the foliage.

Maples are also famous for their autumn coloration, producing a fine displays

Beginning of the Autumn colouring. 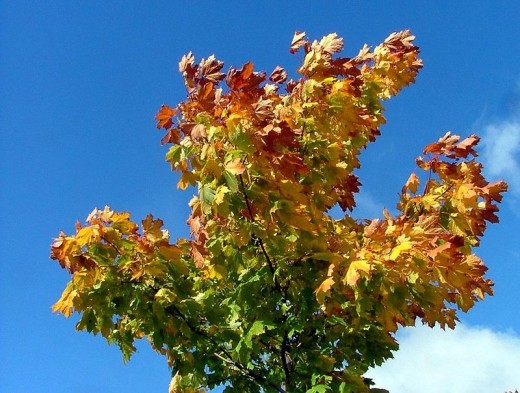 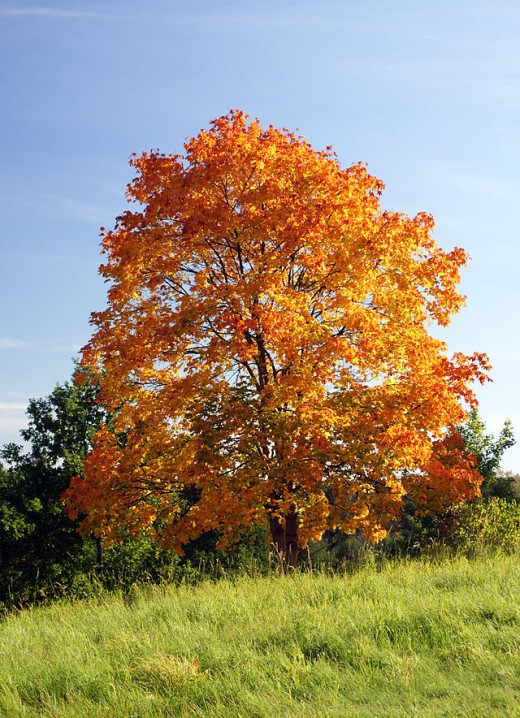