Nightshades and their relatives.

Nightshades belong to a fascinating family of plants which include some garden favourites, the family Solanaceae. The Solonaceae is often referred to as the nightshade family. The family members have long been utilized by man in various ways. a family of plants used in this manner is referred to as being ethnobotanical. They are used for food medicine and spices. Capsicum {Paprika chile pepper is one such example}. However, as we shall see many of this family are poisonous giving various degrees of toxicity which may be mildly irritable to causing fatalities with small quantities.

I will commence with a species well known to many people the deadly nightshade Atropa belladonna. The genus name Atropa is derived from the Greek Atropas one of the fates who held the shears that cut the thread of human life alluding to the poisonous nature of the plant. The species name of belladonna is Italian for beautiful woman, referring to an extract obtained from the plant to dilute the pupils of fashionable ladies. Their are other suggestions that explain the species name such as it may refer to the berries, {which are shiny black when ripe} that attract the unwary like a beautiful but treacherous woman; or that it derived from an archaic tradition when members of the Black arts used to drink an infusion of the plant before they worshipped invoking the awe of Belladonna, the goddess of war. the word nightshade comes from the old English nihtscada apparently night and shade alluding to the toxic nature of this group of plants. 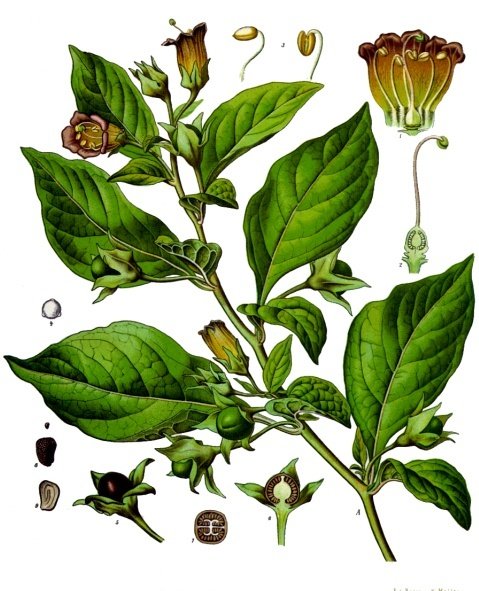 The deadly nightshade is a medium sized plant with a shrub like nature. It looks innocent enough but this appearance belies its highly poisonous parts that have caused fatalities in the past. the foliage is arranged in an alternate manner along the thick green stems, they are oval in form and end in a point. they are untoothed and borne on short stalks.

The flowers are 2-3 cm long, bell shaped with short greenish tubes flushed with a violet brownish colour.. the flowers have five triangular lobes which when open form the mouth of the flower. The green sepals beneath the flower terminate in linear points. the flowers are succeeded by berries of a shiny black colour which sit on top of the spreading sepals. The berries are round 1.5-2 cm wide. These berries are highly poisonous, very alluring to children and they taste sweet, consumption of these berries may lead to fatalities.

This shrub like plant growing up to 1.5 m tall flowers from June until August and may be encountered in a variety of habitat which includes light woods, clearings, scrub, rough ground and around old buildings.

Despite its highly toxic nature the plant has been employed in medicinal preparations to treat cramp-like intestinal and urinary pains. it has narcotic and sedative properties. As previously mentioned Atropine extracts {the refined juice of the berries } was once employed to enlarge the pupils . It is still sometimes used in certain eye examinations. However, it should NEVER be used in home made preparations and NEVER be taken internally. 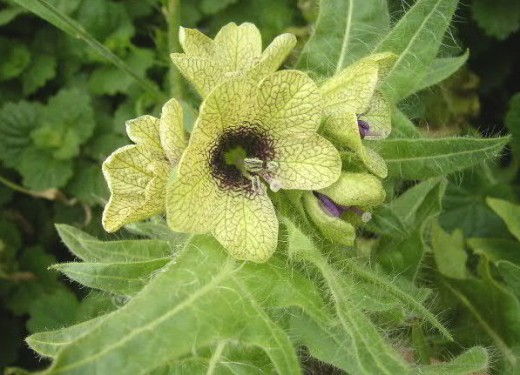 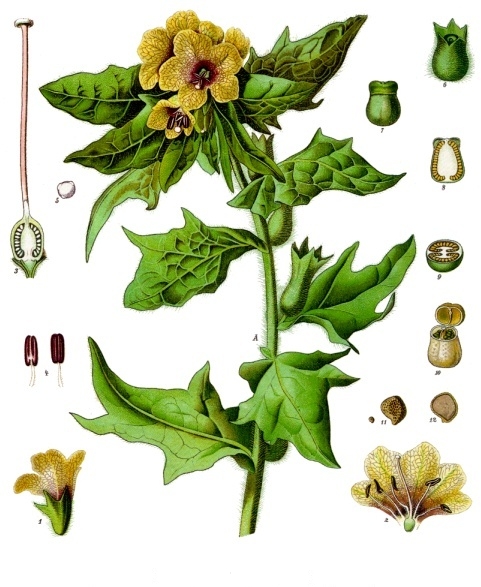 Henbane Hyoscymus niger is a related plant which is also poisonous. The genus name is derived from two Greek words which together indicate " the bean of the hog", the animal was supposed to eat the plant without any apparent detriment, giving rise to the old country title of Hog bean. The species name of niger comes from the Latin word for black. It was once believed that if any part of the body was touched by the plant it would turn black and rot, probably alluding to the poisonous properties.

The common name of henbane derives from the fact that the seeds were thought to be poisonous to hens and poultry in general. An alternative school of thought says the name arrived from the Spanish hinna meaning a mule,eg, hinna bell alluding to the shape of the seed vessels to the bell hung around the neck of mules.

The best identification feature s of this plant is the foetid smell it produces. Although it is closely related to the previous species they are very different in form and character. The pale veined foliage clasps the stem. They start their lives as a rosette in their first year. Along the stem they are arranged alternately. Soft in texture being oblong with coarsely jagged edges somewhat thistle like but lack the spines.

It is a downy sticky species. The flowers 2-3cm long are solitary and bell shaped of a dirty cream colour or yellowish brown with purple veins that nett the petals. Each flower is borne on stalks that arise from the axil where the leaf stalk joins the stem. They usually occur towards the top of the plant stem, the sepals form a tube that terminates with sharp teeth.

This plant tenants waste ground, farm yards, old buildings, coastal sand dunes and shingle. They attain the height of 40-80 cm and flower from June until October. This poisonous plant has been used in preparations to treat afflictions such as asthma , colic and Parkinson's disease. it is claimed to relax muscles prior to surgery. In archaic times it was widely employed as a sedative and pain killer. However, it is another species that must not be used in home made preparations.

Both the above species are widespread but scattered in distribution. The next species under review is a far commoner species and much more likely to be encountered during the course of a ramble. The Bittersweet, Solanum dulcamara 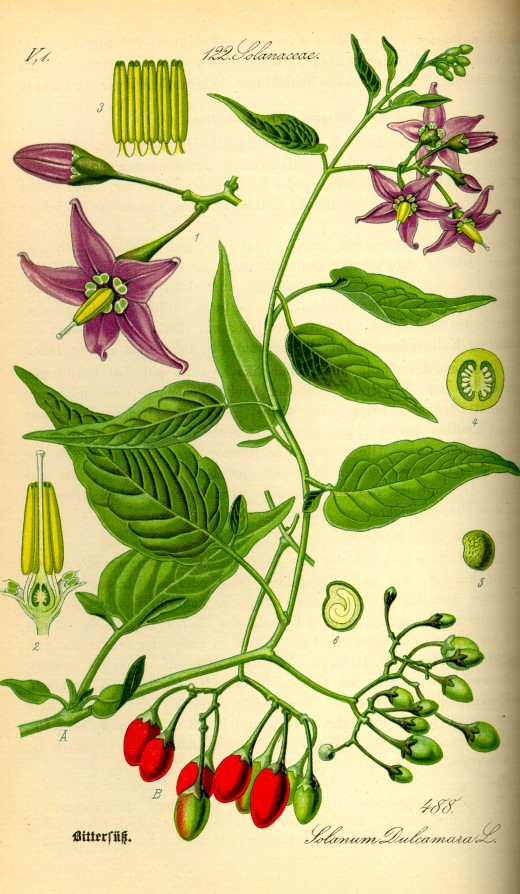 The name Bittersweet refers to the fruits {berries] which are bitter to taste at first then sweet. The berries are poisonous. the genus name Solanum is said to derive from solar " I ease" referring to its medicinal properties attributed to this group of plants. Dulcamara the species name comes from Latin dulcis meaning sweet. In archaic times it was written as amara dulcis literally meaning bittersweet. another well used common name for the plant is woody nightshade.

It tends to be a scrambling species growing to the size of 2m. They have a woody base to the stem. The foliage is arranged alternatively along the length of the stem. They are untoothed with 3-5 lobes often heart shaped at the base with short stalks. the flowers are a good identification indicator having slender blue purple petals that surround yellow cone of anthers that protrude. The Petals often curl back towards the stem. they are produced in long-stalked, drooping clusters. 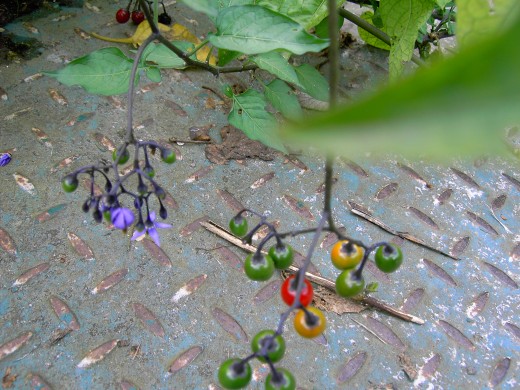 The berries are very poisonous. Here it shows them in various stages of their development . Dal. dalswildlifesite.com

The flowers are succeeded by berries, green at first becoming red when ripe. These poisonous berries can cause fatalities especially among children when as few as five or six of them consumed would be sufficient. The species flowers from June until September and they tenant hedges, wet woodland,banks, clearings, marsh and fen. Not to be used in home made preparations. 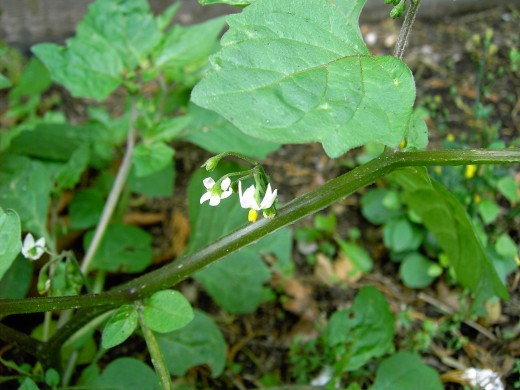 The Black nightshade, Solanum nigrum is common and often encountered in gardens and allotments particularly among crops. Stems are of a blackish colour. The foliage is variable and arranged alternately along the stem, they may be triangular or oval ending in a point. The flowers have white petals which surround a cone of yellow anthers. This is another species where the flowers are succeeded by berries, green at first but then ripening to a shiny black colour. They attain the height of 10-50cm {one and a half feet}, and flower from June -October. I have reviewed some of the more common members of the family that are poisonous and there are others of the same ilk that are uncommon or restricted in distribution. Now as the photographs convey there are many garden plants that are related to the nightshades.

Garden relatives such as Nicotiana are often cultivated by gardeners. 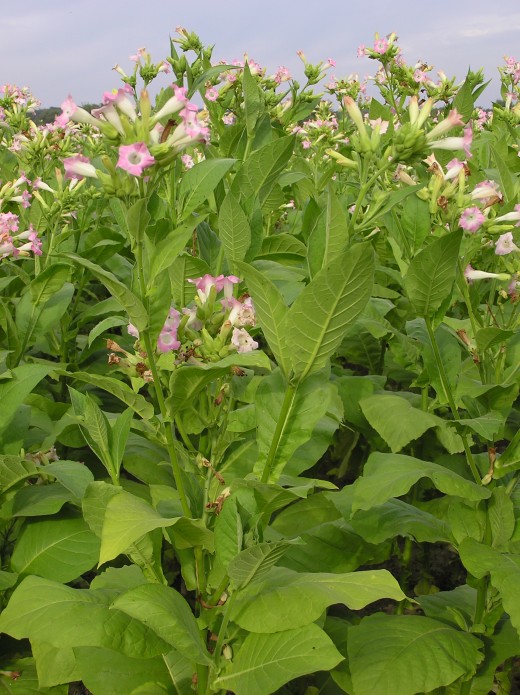 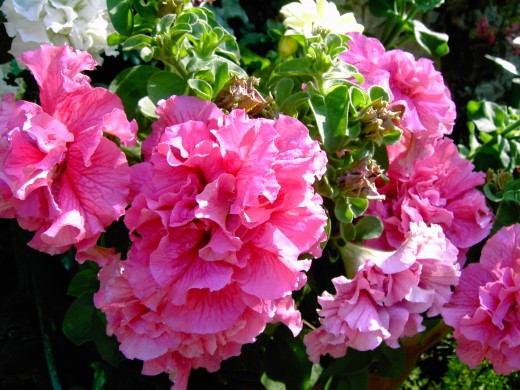 Petunias are in the Nightshade family such as this double variety. Dal dalswildlifesite.com

Confusingly a plant known as enchanters nightshade is not a nightshade- It is in fact a member of the Willow herb family-the Onagraceae.

However, it may come as a surprise to many people to learn that two relatives of these poisonous plants are a regular component of many peoples diet- the humble potato and the tomato. The family traits of toxic properties still occur. If any green part of a potato or tomato is consumed it will have a detrimental affect on the consumer. {green tomato's are used to make chutney where the cooking alleviates the detrimental affects.}

The Solanaceae family is indeed an interesting one, but must be treated with respect. 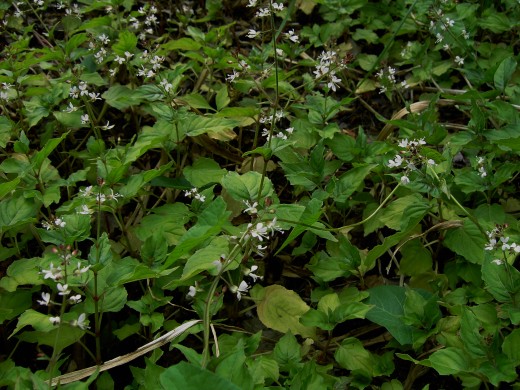 Potato and tomato are related to the nightshades. 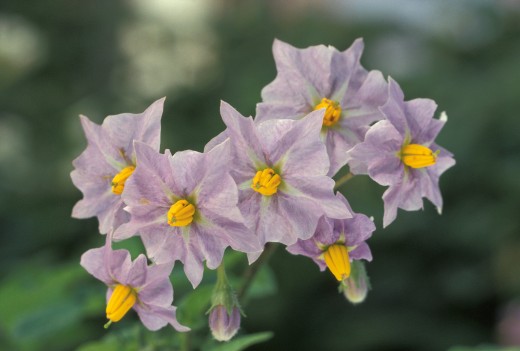 Flowers of the potato are similar to those of nightshades. 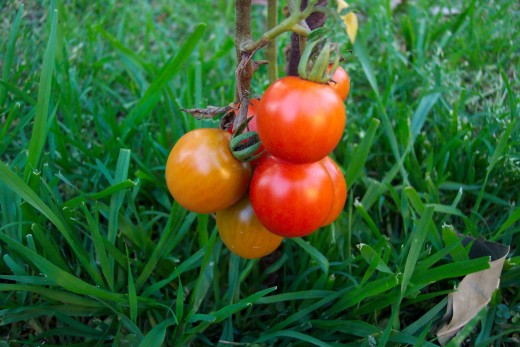 The popular tomato is a relative of the nightshades  Image courtesy of Enochlau CC BY-SA 3.0 license.