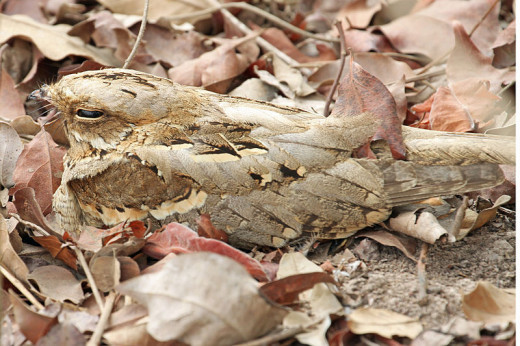 This interesting and unusual bird belongs to the order of birds known as the Caprimulgiformes and the family Caprimulgidae. it has had many country names applied to it, which include Goat- sucker, which coincidently gives rise to its genus name Caprimulgus, which derives from capra-a goat + mulgere meaning to milk, from a misconception that the bird sucked milk from sleeping goats.

Other names such as Dor-hawk,Nighthawk, Fern owl, Wheel bird, Jar owl and Churn owl all relate to the birds habitat and nocturnal activities, depending in which part of the country the bird was encountered. Although,not strictly a rare bird, it is never frequently seen. Here in the UK the bird is presently on the Red List of Conservation concern. The criteria for the inclusion is that there have been declines of over 50% in population numbers/distribution in the last forty years. In the case of the Nightjar it is a decline in its breeding range that is of concern. Until quite recently the estimated numbers for summer Nightjars was 4,600 males in the UK.

However, the latest Bird Atlas 2007-2012, reveals that the Nighjar seems to be recovering and has regained most of its lost range in the last five years. This is thought to be connected to Moorland and Heath conservation , where great efforts have been undertaken to manage the habitats for these birds {and others}.

In America the Common Whip-poor-will Phalaenoptlius nuttallii, represents the nocturnal bird of the Caprimulidae family. The Eastern Whip-poor-will is another representative in the genus Antrostomus.

The Gaelic name for the bird is Seabhag-oidhche, the Welsh Trellwr and the Irish Tuirne lin. Its 'weird' nocturnal habits and ghostly flight gave rise to our ancestors giving the bird the superstitious name of Lich {corpse} fowl.

Observing the bird, even where it occurs proves very difficult not only because of its nocturnal habits but also because it spends its daylight hours silent ,motionless and superbly camouflaged, as the photograph above illustrates..

Here we review the lifestyle and breeding habits of these mysterious birds. as always we start with a description of the subject under review. 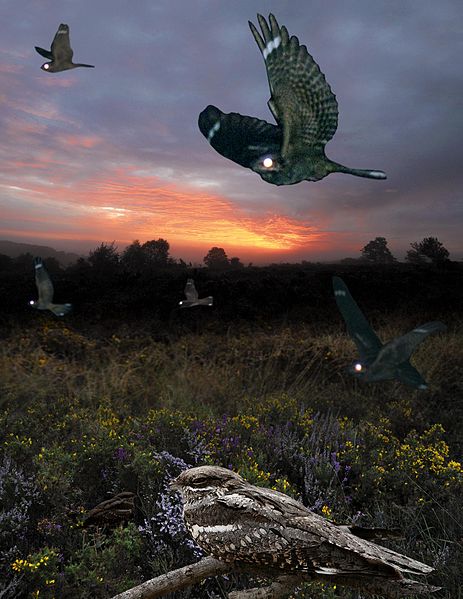 Swaysland in his book Familiar Wild Birds 1837, relates---" Some years ago, while making a journey one morning, I noticed a Nightjar crouched along the top of a rail by the side of, and only a few feet from, the railway running through Glynde in the county of Sussex {southern England}, and when the train in the afternoon,passed, some six hours later, the bird was in the exact same position. It may be mentioned here that Nightjars do not perch in the same way as other birds, but crouches or lies upon the branch, or whatever it may be resting on, in the same direction of the limb and not across it in the manner of most perching birds.

This manner of perching along with its excellent camouflage makes it very difficult to spot even when in a tree. This bird must be frequently passed by, without being noticed.

Description of the European nightjar.

The plumage of the Nightjar is almost entirely composed of various shades of brown with black markings, and the general appearance is sombre and inconspicuous. There are markings of white on the throat, and the three outside wing feathers near the patch are also tipped with white. The tail is widely expanded in flight.

In relation to its body size the wings are medium long, the tail medium long, the neck short, legs short. The bill very short. The formation of the foot is unusual the middle toe beiong long and provided with a claw, serrated on its inner edge,like a comb. It is not known for sure how this arrangement helps the bird. Some naturalists believe it helps them to hold food by the foot, however, the relative position of the foot to the bill, and the shortness of the leg make this theory unlikely.

The position and the shortness of the legs make it difficult for the bird to walk and it is on its aerial prowess that it relies. Although the bill is short, its gape is wide. The bill is of a blackish-brown colour.

The voice of the Nightjar is something between a hiss and churring sounds. The noted that make up this 'churrr' are emitted at the rate of 30-40 per second. As with many other bird species the sounds made are very misleading as to the actual locality from where they originate.

Nightjar lying along a branch. 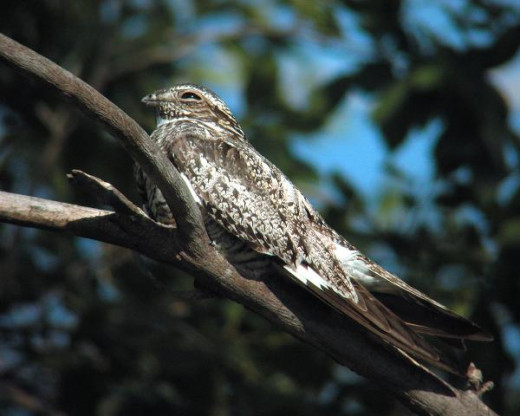 The name of Fern owl, alludes to its fondness of bracken {UK}, as the Red grouse is with heather. It haunts moors and extensive heaths, the outskirts of forests on open places where the bramble strive with bracken as to which will occupy the most space. In such places it is fond of the driest and sunniest spots. It also loves the shelter afforded by pine woods on the border of moorland.

When flushes it dashes off in a somewhat bewildered manner. Dixon describes its habits near London--" Few things are more pleasant in the refreshing cool of a July veining than to stroll into the Nightjar's haunt and watch the aerial gambols of the sombre, yet handsome little bird of the night"

Although dull and quiescent in daylight, the bird is vastly different when its feeding time arrives, then, its whole character changes, it suddenly becomes possessed with marvelous powers of flight, and exhibits an endurance of prolonged flight and movement that place it among the very best of flyers. They may well past within touching distance, then wheleround some old oak or chestnut tree, rising high in the air , then gradually descending, sweeping forwards in a long straight line, then resuming a series of graceful curves, one moment visible and the next it is lost in the gloom.

The bird is like some gigantic and sombre swallow according to Morrison " and like the swallow is a summer visitor to our shores, and also like the swallow subsists exclusively on insect food" It arrives in the UK relatively late not appearing until the middle of May, and leaving again after a stay of about four months.

The bill of the Nightjar, as previously mentioned is short but flexible, the gape is wide and the mouth is furnished with a number of stiff bristles , which project in a forward direction, and no doubt materially assists in the capture and retention of the moths and beetles upon which it feeds. There are on record instances of the birds feeding in daylight, however, it is highly probable that these birds have just arrived, hungry, after a nights migration.

Mr.Frohawk { a fine name for a birder} relates of his observations of the vast amount of insects the bird devours,says that in August 1880, he shot a female in whose mouth were 12 moderately large Noctid moths, several of which were still alive" And as evidence of difficulty of putting up a sitting female Nightjar, he notes that on 21st June 1874 his brother was out moth catching, and seeing a moth which he wanted stooped to box it, almost kneeling on a Nightjar, which rose from just below his knee, exposing two partly incubated eggs.

According to Butler, 1898, the species was exhibited at the sixth exhibition of the Ornis Society in Berlin, and Dr.Karl Russ spoke of it-" Mrs. Kalwach who came over expressly to the Ornis Exhibition and brought with her many many saleable birds, also showed among them some very remarkable rarities, owing to which the collection was at a premium. Three Night Swallows {Nightjars} excited most attention, since they had never previously been seen alive at any exhibition or any Zoological Garden, and rightly too,as the difficulty of rearing these birds is best illustrated by the fact which engineer Pallisch { co-editor of the proceedings of the Ornithological Society Vienna}, has published therein-mainly that in no instance have Nightjars survived, which have been nourished in captivity. In every case, at much about the same age , they have infallibly become permanently constipated. The Nightjars at the Ornis Exhibition were, however, tolerably sprightly, and we hope fall into the hands of a bird keeper who will be able to look after them, not only with care, but with full intelligence."

Illustration of nightjar and eggs. 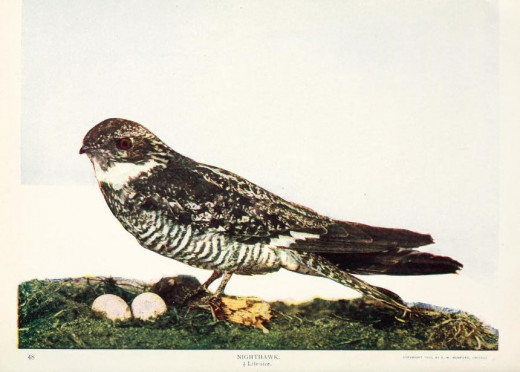 The Nightjar builds no nest, but lays its eggs on the open ground of some copse or wood, which they generally resemble so closely that they are extremely difficult to locate. Only tow eggs are laid, about the beginning of June. They are perfectly oval, of a whitish colour with delicate veins and markings of bluish-grey and pink, and rather more than an inch long { two and a half centimeters}.

The eggs are incubated by both parents for about 18 days by both parents. The chicks are covered by a fine down and are capable of running round almost immediately. The young birds, when able to crawl about, show remarkable agility to conceal themselves by running into nooks and crannies, where they remain quiet until the danger has passed.

Only one brood is raised and eggs or young found late in the year are probably be the result of a replacement clutch, when the first has been lost for some reason. Young males in their first plumage have the large spots on the wings and tail smaller than in adults, and of a buff colour rather than white. At each succeeding moult these spots appear to become larger in size and purer white in colour.

Although able to move around the chicks make no attempt to feed themselves, and are carefully attended to by their parents, till they are well able to fly. When they have mastered the power of flight they leave our shores for warmer climes.

UK-Amber list due to declines in population/distribution of over 25% in the last thirty years or so.

The images  on this page may be reused. However, the name of the relevant author must be attributed along with any accompanying license.