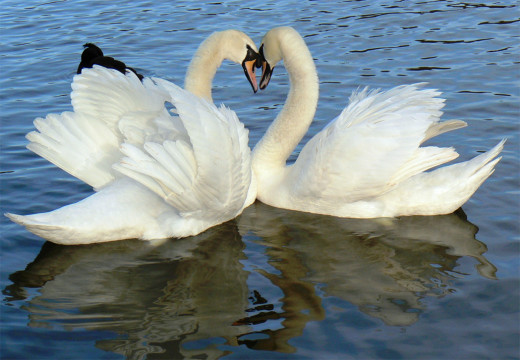 Pair making a heart shape with their necks and heads. Courtesy of Mozzercork CC BY-SA 2.0

The Mute swan belongs to the Anseriformes order of birds and the family Anatidae. It is has been allocated the scientific name of Cygnus olor. Cygnus is the Latin name for the swan {from the Greek kuknos} and olor is also a Latin name for a swan.

The birds have been introduced to North America, Australia and Southern Africa. The Gaelic name for this species is Eala, the Welsh Alarch Dof and the Irish Eala Bhalbh.

In England the Swans are marked annually {Swan Upping} for the Queen and others, originally for the table [See Text below}. Here we look at the species is lifestyle and breeding habits along with notes from past ornithologists and other eminent writers. As always we start with a description of the subject under review 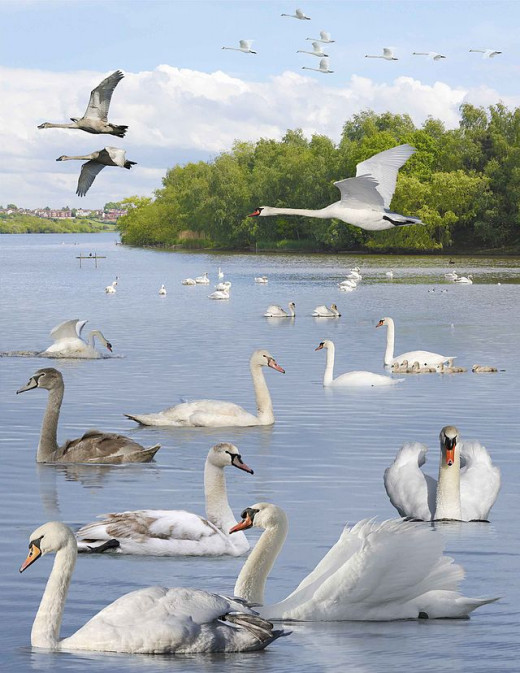 The mute swan is a large familiar bird, strikingly white and easily observable from a distance. In the UK {particularly} the species although wild become quite tame and due to their close proximity to man may even be described as semi-domesticated. However, territorial pairs can be aggressive even to people and /or their dogs.

The body is pure white ,the bill orangey red angled downwards. They also have a black prominent facial knob. The long neck is often curved or upright, they also have a relatively long pointed tail. The legs and feet are black. The female {the Pen} is a little smaller than the male {Cob},and the knob at the base of the bill is not as large.

The flight is heavy, but strong and powerful with the neck stretched out. The powerful wing beats produce a throbbing sound. They weigh between 10-12 kg {22-26 lbs}

The Swan was once referred to as the 'peaceful Monarch of the Lake'.

Close up of the head. 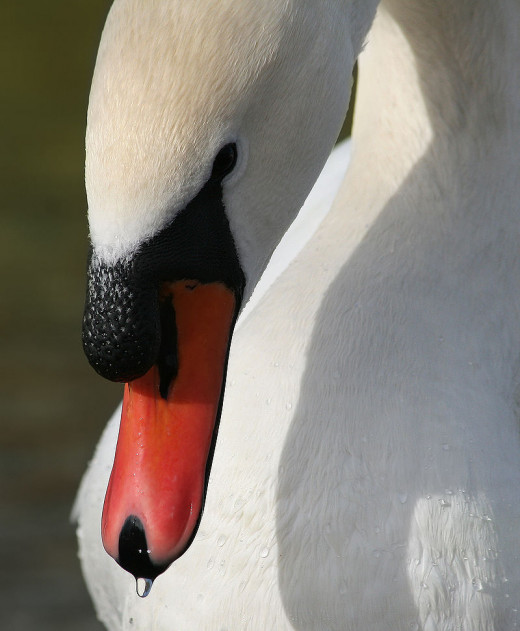 This beautiful and graceful large swan is a familiar sight has its glides by on its chosen body of water. The truly wild populations of this species are migratory { particularly when dispersed by cold weather} Although in many countries they tend to be essentially sedentary. They breed in isolated pairs in well defended territories.

This species suffers heavy losses from lead poisoning due to ingested lead fishing weights, lead shot and lead contaminated sediments from mining and smelting activities. Losses have also been reported from local incidences of copper poisoning. The ingestion of or entanglement with fishing lines and/ or hooks can also cause sever injury or even eventual fatalities. They are also vulnerable to avian flu. They are called mute swan because it is less vocal than other species.

Looking through historical records it is remarkable that Professor William Macgillivray, one of the most astute observers and eminent ornithologist should have omitted {except for about half a dozen lines}, any mention of the Mute swan. At that period they were truly wild and bred in many parts of Europe from the Baltic as far south as Greece and from the Rhine to the Volga.

The bird, according to Butler, was introduced into this country from Cyprus at the close of the 12th century by Richard the first. The Swan was dedicated to Apollo and the Muses and it was a common belief among the Ancients, that the body of the swan was allotted as the future residence of a poet. The legend of the death-song of the dying swan was held by many Greek and Roman poets and historians, but discredited by others, of whom Pliny was one.

In more modern times it has served the purpose of pretty poetical fiction. The Late Lord Tennyson has embodied the idea in his poem 'The Dying Swan'

Of that waste-place with joy;

Hidden in sorrow; at first to the ear

The warbel was low and full and clear"

" But anon her awful jubilant voice

With, a music strange and manifold

Flow'd forth on a carol free and bold

The desolate creeks and pools among

Were flooded over with eddying song" 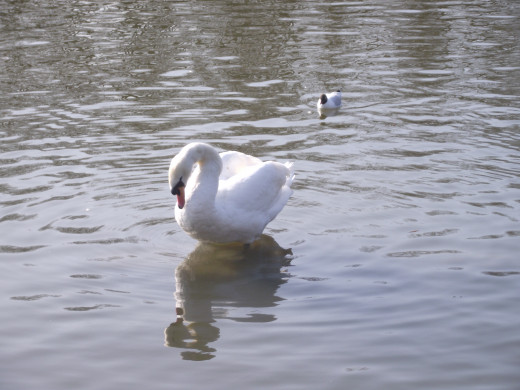 In these more modern times it is hard to realize the value formerly set on the possession of swans by our forefathers. Thousands were kept by the Crown, the  nobility ,lay and clerical ,rich city companies ,guilds ,town corporations and Colleges .It seems no banquet was complete without its quota of Swans, Peacocks and Herons** . Indeed ,our ancestors appeared never to be tired of roast cygnet in season, which was about Christmas time. In the celebrated banquet, the fare bill of which has been so frequently quoted, given at the 'intronization' of George Nevell 1464, Archbishop of York, four hundred swans were provided.

In these days roast swan is no longer a subject of choice as far as our menu is concerned and the  Goose is now more favoured by the modern palate.

The laws regulating the keeping of Swans during the Middle Ages were stringent. All swans were Royal birds and the King's property ,and permission to duly qualified subjects were given by a grant from the crown to keep them ,at the same time a special and registered swan mark was granted. These swan marks were cut on the upper mandible of the bird ,the device being chiefly nicks ,lines ,letters, crosses,circles and stars curiously disposed. A description of these swan marks would merit a separate article-a literature to itself.

By an Act of Edward iv, it required a freehold qualification to keep a swan, excepting only the King's own son. The punishment in Henry vii reign for stealing swans eggs was imprisonment for a year and a day, and a fine at the King's will. All unmarked swans were the property of the King.

The king had a chief Swan-herd-'A master of the king's swans'-and no person keeping swans could appoint a new Swan-herd without a license being granted from the King's Swan-herd, and the fact being duly registered in his book. The position of the Chief Swan-herd in those days must have been an exceedingly lucrative one. In Thompson's 'History of Boston' { Lincolnshire England},is given the following Fen laws passed at the " Court view of free pledges ,and Court leet of the east, west, and north fens, with their members, held at Revesby 19th of October,1780"- To the effect that " No person shall bring up or take any Swan's eggs,or Crane's eggs,or young birds of that kind, on conviction of every offence three shillings and four pence will be paid".

In earlier times the fine for stealing a swan was paid in wheat, the bird being hung in a house by the beak and just touching the ground, the delinquent then had to repay the owner by pouring wheat over the swan till the heap covered all the bird to the top of its beak.

Butler 1898 conveys he had seen some fascinating records of swans in captivity-" The number of eggs laid by the female are greatly in excess of the wild species,10-12 is not an unusual number and 17 have been recorded" Stevenson in his book 'Birds of Norfolk', mentions an instance of a very exceptional pair, a fine young male and a three year old female on Surlingham Broad, as taken from the Swan-herd's book. In the years 1886 to 1873,inclusive, 85 eggs and these produced 82 cygnets"

A marked swan has been known {again from the Swan-herd's book} to live for 50 years. Great numbers of swans were formerly kept on Lincolnshire rivers and on the famous swan pool at Lincoln St.Helen's Swan Pool at Norwich was noted feeding place for cygnets ,from 80-100 being fed there at once. The Great Swannery of the Earl of Llchester, at Abbotsbury, near Weymouth was regarded as being the largest in the kingdom, and existed in the time of Elizabeth the first.

When Mr.J.H.Gurney visited the place in April 1878, the Swan-herd informed him that the total number under his charge was 1,300, half of which were engaged in the duties of incubation. In 1877,about 700 cygnets were hatched. In 1888,there were six to seven hundred swans on the water, most of them young cygnets being hatched by the first week of June.

The Swan is a very graceful bird. 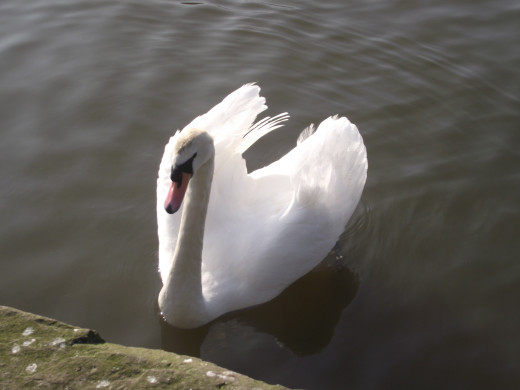 The swan makes its nest on the ground near the water side, or on some mound on an island in the river or lake. It is made of rushes and flags and is an impressive size. if the water threatens to rise,more material is brought by the male and worked in by the female, are added to deposited beneath the eggs which are lifted higher out of danger.

A record appeared in the 'Nottingham Journal' in 1844 which reveals " We are informed, upon undoubted authority, that the swans {which usually build upon the ground} have this year invariably raised their nests to the height of two and upwards; a similar fact is observable with respect to waterhens. This is by some persons deemed an omen of a very deep summer flood" 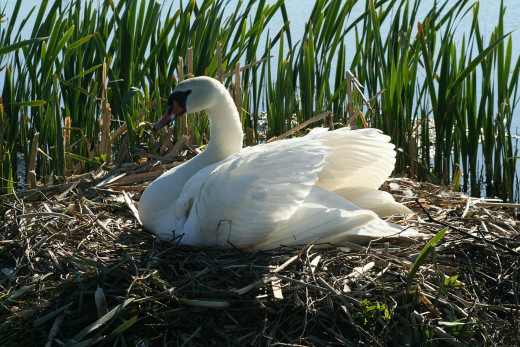 The average clutch of the Mute swan is from 4-7 eggs. the nest at times seems to be much higher than required by the occupants. The eggs are a dull greenish white. Swans are very protective of the nest and resulting young. The parents will make loud hissing noises and will attack intruders with powerful wings.

Morris History of British Birds says on the subject " The swan is conscious of its superior strength, he fears no enemy, nor suffers any bird, no matter how powerful, to molest him; neither does he prey upon anyone. His vigorous wing is a shield against attacks even of an eagle, and the bows from it are said to be so powerful, as to stun or kill the fiercest of foes. The wolf or the fox may surprise him in the dark, but their efforts are in vain in the day. It has been said that a blow from the wings will break a man's legs"

Incubation of the eggs lasts for about 34 days before the young hatch and make their way into the world. In a very short time they follow the guidance of their parents to the water, and seem to have little instruction except those given instinctively by nature to swim and feed themselves.

Large powerful wings of the swan. 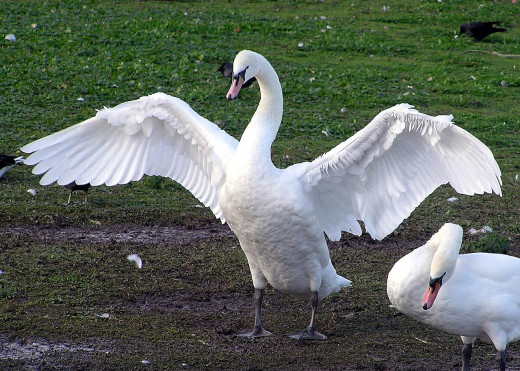 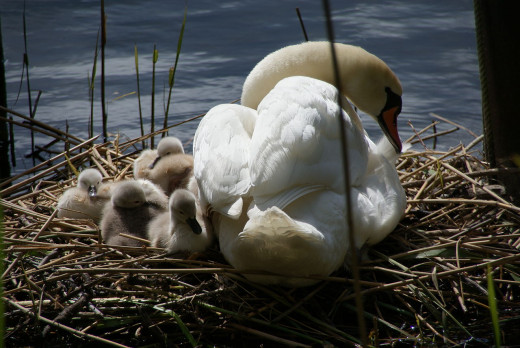 Meyer, 1850,who studied the swan makes these notes " The attention bestowed by the old birds upon the young is incessant, and when fatigued by the strength of the stream, or requiring to be moved to a far distance ,too great for their young capacity;the hen bird takes the young ones on her back ,which she accomplishes by lowering herself a little in the water and occasionally assists them to ascend with her foot, and in this manner they are carried to safety to some more desirable spot. the shape of the swans back, which is very flat, is well adapted for this purpose, and when her beautiful wings are raised, the young ones repose in the most beautiful and soft cradle imaginable"

The cygnets are at first of a dark, dull, blueish grey colour, the bill at first a lead colour, then becoming lightish slate colour with a tinge of green. The chin, throat and breast are paler than the back and often tinged with brown. At this stage of their development it is not surprising that  the story of the 'Ugly Duckling' was derived.

By the end of the second summer they have already done with the grey brown livery and by the time they are two years old they have attained the beautiful white plumage of the adults. 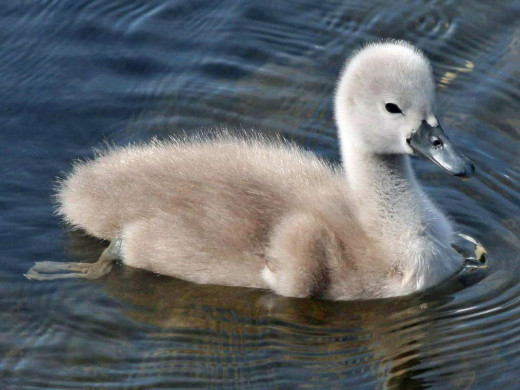