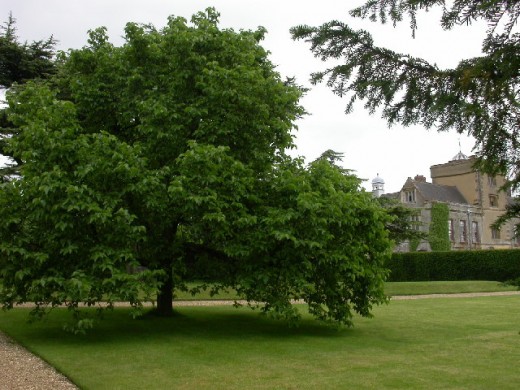 This is a page  which aims to help those that wish to identify trees, but are unsure of the species. Most people start their identification process by recognizing the shape and colour of the foliage. This is fine when the tree is in leaf,but of little use when the branches are naked and bear during the winter months. However, every tree has a character {s} which help the observant to recognize the tree even in the depths of winter.

Here we review the Mulberry tree Morus nigra and its close allies. With the aid of descriptive text and quality images, both of which should help you to be able to identify the tree. Morus nigra is also referred to as the Common mulberry tree and the Black mulberry tree.

It is a deciduous tree native to Persia but also found on the sea coast of Italy. It was introduced to England in 1548. It is widespread through Afghanistan, Iraq, Iran, India, Pakistan ,Syria and Turkey. In America it has naturalised in urban regions of Eastern North America.

The oldest existing Mulberry trees in England during the 1800's according to Boulger, were almost certainly those of Syon. These may have been planted by Dr.William Turner himself { regarded as the father of English Botany} ,in 1547 or 1548. Those old trees were still vigorous in Boulger's time though then nearly all prostrate.

Undoubtedly, and less sold for the purpose {and then valued more for its fruits} the Black mulberry was used as a food for the Silkworm in southern Europe before the introduction of the more delicate Morus alba {see below}. Its harder nature also led to its introduction into Britain long before attempts were made to grow silk in this country.

In his 'Name of Herbes' in 1548,Turner states-" Morus is called in Greek morea, in Englishe a Mulberry tree, in Dutch maulberbaum and in French murie, it groweth in diverse gardines in Englande" . In 1596 Gerard had both species growing in his Holborn garden and in 1609,James 1,emulating the example of Henry IV, of France,did hid best to precept the distribution of seeds and young trees,to spread the cultivation of his Mulberry and the rearing of silkworms in England.

Silkworm on a mulberry tree. 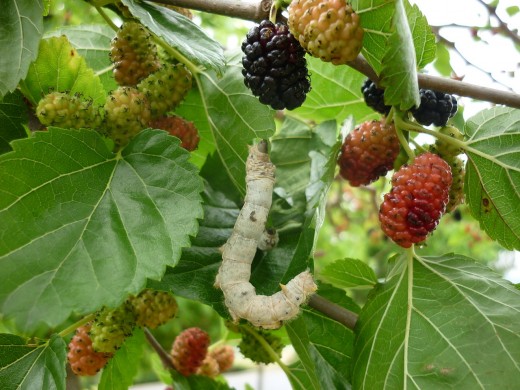 Basic biology of the Mulberry tree.

The Mulberry belongs to the order of trees known as the Rosales and the family Moraceae within that order.

The great majority of broad-leaved trees belong to those groups,which owing to their general lack of a carolla,and sometimes a calyx as well, were once commonly referred to as being 'incomplete'. The plants with such simplified flowers , the stamens and carpels not infrequently occur either in different flowers on the same tree,when it is termed as being monoecious in botanical parlance, or even on distinct trees,when it is termed as being dioecious.

In these incomplete trees, whether the stamens and carpels are separated or not, there is commonly a lack of both honey and perfume. In the absence of these inducements,insects do not visit the blossom,and, in the production of a large amount of small-grained pollen, often maturing in stamens which hang prominently out of the flower,and which may even ripen before the leaves unfold from the buds in spring, they are adapted especially for wind pollination.

An assemblage of such groups of simple types of flowers was known as the Urticaceae,or nettle order,and not only nettles but hemp,hops,mulberries,breadfruit and elms** were all grouped together into the Order, until botanist themselves recognized it as a mere confusion of ignorance and came to term it as 'the marine-store-shop'.

The Order Moraceae consists of trees belonging to tropical and sub-tropical regions and possessed a milky juice or 'latex',which in many cases contains a certain amount of rubber.

In the Mulberry the staminate and the carpellate flowers are borne in distinct clusters, a tree sometimes bearing one type of flowers exclusively, and the multiple fruit we know as a mulberry is the product of the carpellate clusters only. As these clusters contain several,but not a large number of flowers,and are pendulous, they may be roughly compared with the hanging racemes of the red currant, the gooseberry or the scarlet Ribes,although there is a differences in their subsequent development.

In the Ribes, the petals and stamens disappear,and each flower forms a fruit crowned with the withering remains of the calyx. In the Mulberry the four small green 'leaves' of the perianth become enlarged and change colour till, with the exception of the delicate epidermis, they consist of little but juice,and and touch those of the other flowers in the cluster.

The mulberry thus formed corresponds,therefore,approximately to a whole bunch of currants,whilst the true fruits are small, round,dry capsules,each enclosed by its four juicy perianth-leaves. The black mulberry, which according to Boulger, was the only species familiar to us in England and is of course so called from the colour of its ripe fruits . { Although there are some varieties of the White mulberry that produces some black fruit.}

Basic components of the Mulberry tree. 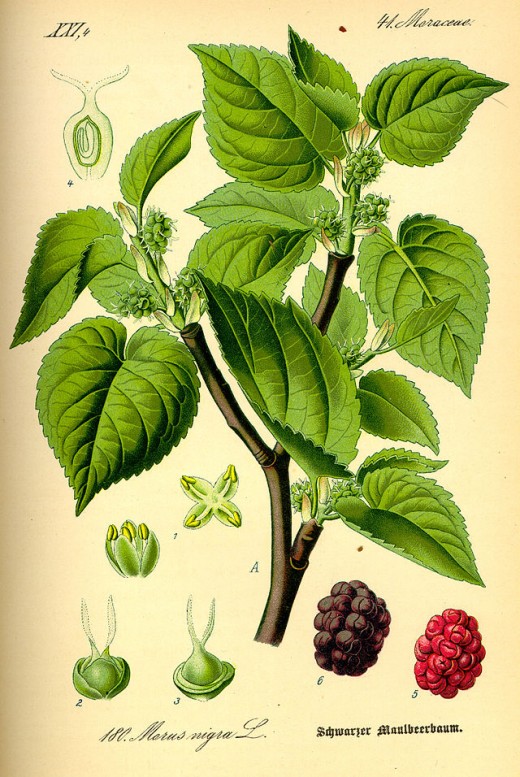 Ode to the Mulberry tree.

The buds seldom open fully until May when all danger of frost is over. Mrs.Craiks poem alludes to this.

" o' the mulberry tree is of trees the Queen!

Bare long after the rest are green.

But as time steals onwards,while none perceives,

Slowly she clothes herself with leaves-

Hides her fruit under there hard to find."

" But by and by,when the flowers grow few

And the fruits are dwindling and small to view-

out she comes in her mature grace

With purple myriads of her race;

Full of plenty,from root to crown,

For the best grows highest,always highest

Upon the mulberry tree" 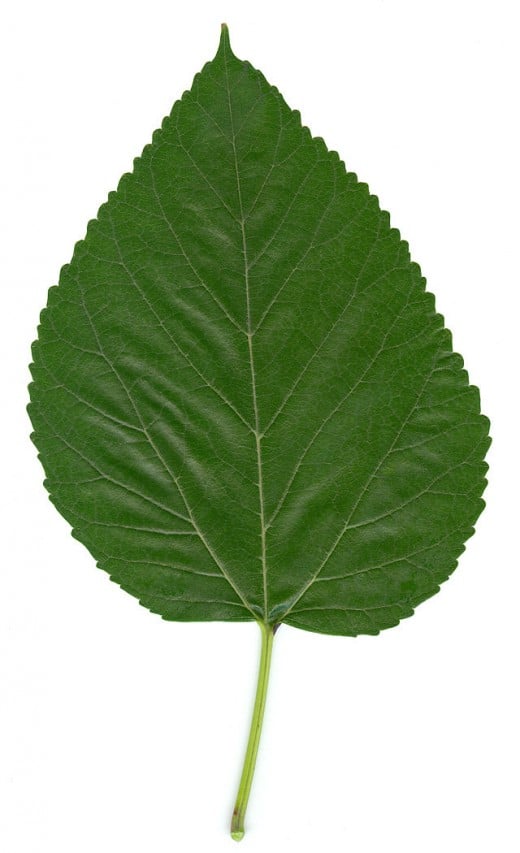 It is generally a much branched tree, not exceeding a total height of thirty five feet,with large horizontal branches commencing at the height of a very few feet from the ground. The trunk is from one to three feet in diameter. The bark is thick,rough and of a reddish brown colour. the branches produce a large roundish head which when in leaf affords a perfect shade.

THE LEAVES----The foliage of this species has a very harsh texture,and is of a dark green colour,which characters combine to give the impression that they are thicker than they really are.they vary considerably in size and form,but may be generally described as being broadly ovate with a cordate { heart -shaped } base,acute apex and coarsely irregularly serrate margins,and not much exceeding four inches in length or breadth.

The leaf stalk is seldom more than a quarter the length of the blade,and is flanked by two linear stipules. The young leaves are softly hairy on their under surface,and remain so, whilst the harshness of the upper surface is produced by the greater stiffness of the hairs borne by them.

Suckers from the base of old trunks,or less commonly the ordinary branches,bear leaves which have four to five lobes,much resembling those of the common fig tree. In Autumn the foliage turns a clear yellow like that of the Wych elm, to which in several respects it bears considerable resemblance.

Close up of the flower 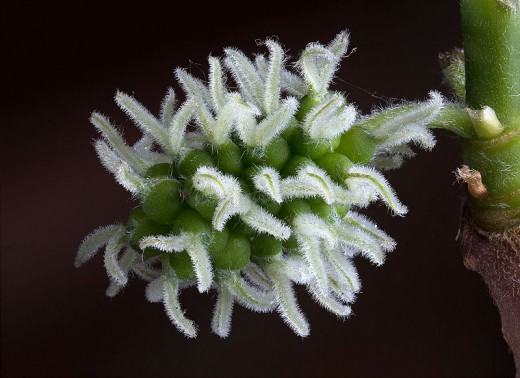 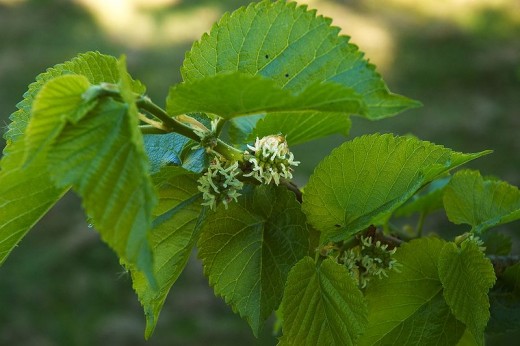 Flowers and fruits of Morus nigra

The staminate flowers are in catkins,and the carpellate ones are produced in the form of spike-like groups,which are of an inconspicuous greenish-white colour, the pollen carried by the wind and no inducement to bring insect visitors therefore is required.

Following pollination the female flowers produce a multiple fruit or 'sorosis' in botanical parlance,we need only add that it becomes an irregularly oval mass about an inch long and turns from green to a dark reddish black.

Though somewhat resembling the Blackberry,with which it was confounded by the Latin classics,in early English writings. { In some country folk lore it was confused up to the early 1900's}. However, there is no real similarity in the structure,the Blackberry being made up of numerous carpels of a single flower. 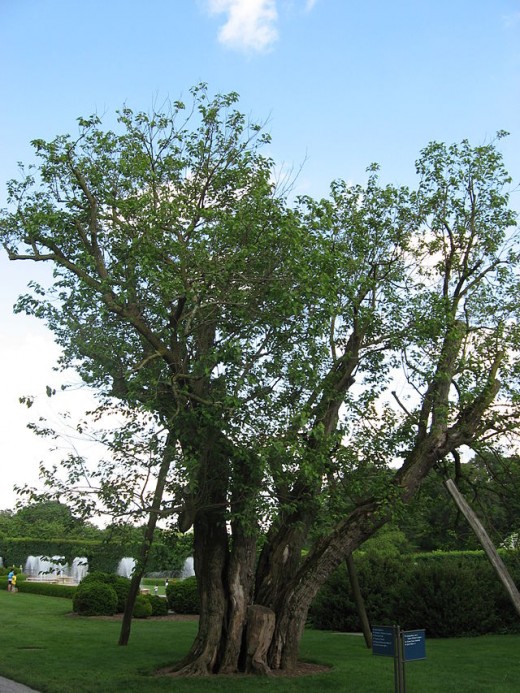 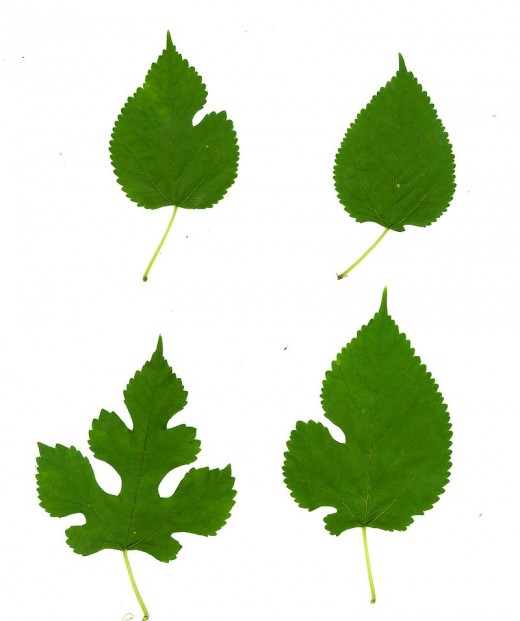 This closely allied species differs in being short lived,fast growing,small to medium sized tree. It is native to northern China and has been widely cultivated to feed silkworms and employed in the commercial production of silk. On young trees and vigorous shoots , the leaves can be up to 30 cm long {one foot} and deeply and intricately lobed. The lobes are generally rounded. However, in trees that are older the leaves are generally 5-15 cm long { two to six inches},and without lobes. They are cordate {heart shaped at the base},and rounded to a point at the tip and they have toothed margins. The leaves often vary in size and shape somewhat as demonstrated in the photo above. 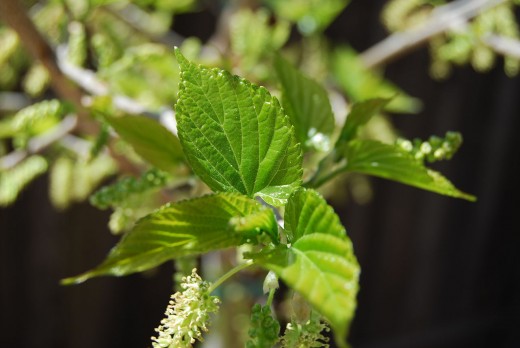 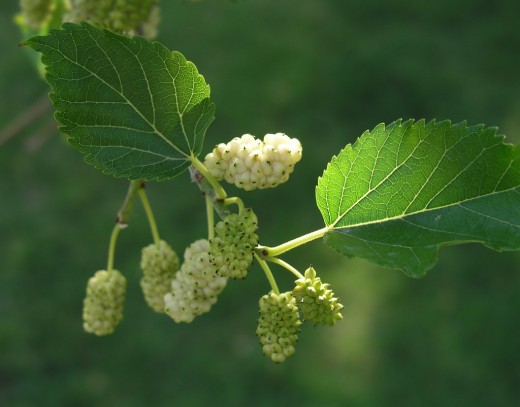 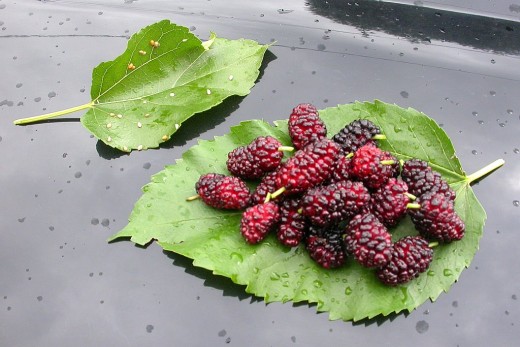