In metamorphosis -1 we looked at the life cycle of certain insects, and, how some insects have four stages to their life cycle. One- eggs. two-larvae. Three-pupa. four- the adult or imago.

here on this page we continue to look at various ways in which insects produce their young. In the first article we looked at aphids which produce live young {viviparous} and the fact that some aphids can produce young without mating or pairing a phenomenon termed as Parthenogensis. However, aphids that have paired produce hard winter eggs on shrubs etc, that are likely to supply  food for their young. In the spring the eggs hatch, and after a series of moults the young grow into wingless females.

These wingless females unaided by the males,indeed there are no males early in the year, produce brood after brood of living wingless females similar o themselves. Later in the year winged females are born and they migrate to other plants, and so spread their race far and wide. Towards autumn both winged males and females arrive on the scene; they pair and as result the winter eggs are produced. It is evident, therefore, that this parthenogentic mode of reproduction is a great time saver.

A still more remarkable variant of the normal life-cycle , or to be more precise the 'four stage life cycle' occurs among the Cecidomyiidae. The females of certain species lay exceptional large eggs, from which in due course the larvae emerges. this larvae is no ordinary individual, for in its body other larvae develop-other larvae of the same species!

This phenomenon must not be confused with any kind of parasitic activity, that is to say when larvae of another species or genus or order may develop inside the body of some hapless larva. In exceptional cases these larvae too, may give birth to other individuals, and so on for several broods. The final larvae behaves in the ordinary manner, pupates and gives rise to the adult fly. A phenomenon  of this nature is known as Paedogenesis.

of all the time saving devices designed by nature evidently with bringing a large insect population into the world rapidly, nothing is more extraordinary than the story of some of the Super family Platypezoidea. Some species are wingless and they dwell in the nest of Termites, and they are hermaphrodite  {having reproductive organs normally associated with both female and male sexes} In other words there are no separate males and females, but each individual possesses the  characters of both genders.

These strange creatures lay large eggs from which, {in almost all cases}  emerge as fully developed adults there are a large number of insect life cycles which can not be completed without the aid of some other, often non-related species. Under this heading, of course, must be included parasites.

One of the most curious is that of certain blister beetles of the family Meloidae and to the phenomenon  the name Hypermetamorphosis has been given to it. One blister beetle species in its immature stages is reliant upon the bees of the genus Anthorphora. The beetle deposits its eggs which may number around 2,000, near the bees nest. This occurs in summer. towards autumn small black larvae, referred to as Triungulins , because they have three claws on their tarsi, emerge from the eggs. {referred to as first instar larvae}

These larvae hibernate where they are hatched and do not feed at all. In the spring they awake to activity, and, their objective is to become attached to the hairy body of a bee, at the door of whose nest they are waiting. Unfortunately these larvae have no way of discriminating between the hairy body of a bee and any similar object. Consequently, many of them are carried away on the body of a mouse and never reach the haven of where they should be. It is fortunate that the mother beetle is so prolific for many of her larvae never reach maturity or even get past the first or second larval stage. 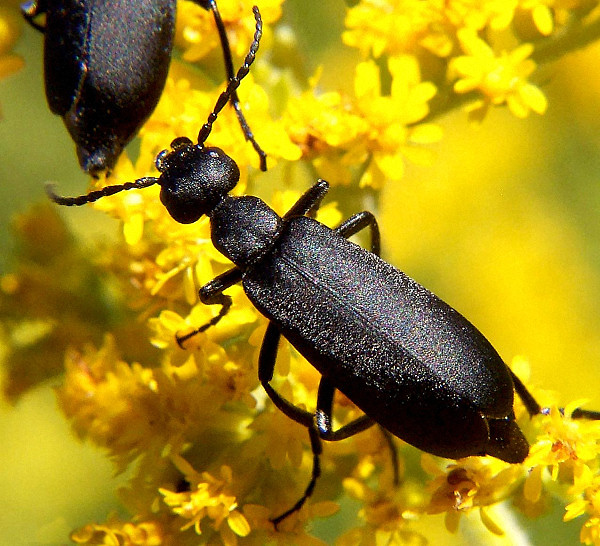 It is general rule in nature and particularly the animal kingdom that in the species whose young are subject to several risks fro predation, that an abundance of young are produced, this is particularly true of insect land.

However, here we continues with the assumption that the Triungulin  has been successful. It becomes attached to the body of a female Anthophora, who, if the larvae has been fortunate, has stored her honey in the brood cell, and in this she will lay her single egg, so the larvae releases its hold on her hair and floats upon the egg which is uses in the manner of a raft.

The bee close her cell and the Triungulin is left in possession of the egg and the store of honey.  The larva makes the egg is first meal and it takes about a week for it to devour it. all this time it remains floating on the 'shell', for immersion into the honey would be fatal. One the remnants of this egg 'shell'  the larva moults, and appears as a totally different creature, which is capable of floating on the honey which it consumes over a period of time until all the contents that were originally in the cell have been devoured. This period of time is about six weeks.

It is then the larva changes into a pupal stage within the larval skin, and either emerges as a perfect adult in about a month, or is capable of delaying the advent for a longer period if circumstances demand it.

Hypermetamorphosis is common among the Meloidae. Our once common Oil Blister beetle Meloe proscarabeaus  has a very similar life story as the one described above. It also depends on  Anthopora for the upbringing of its larvae. However, it does not lay its eggs near the bees nest, therefore the risk of predation is far greater. A far greater number of eggs are laid to compensate for this.

In addition to what is termed 'Normal life cycles' there is another form worthy of mention. This form of life cycle is termed  'Alteration of generations'  and is particularly prevalent among Gall flies/wasps, Cynipidae. Let's take the common Spangle gall of the Oak tree as an example. On the underside of the leaves towards the end of Autumn, we can very often find little reddish coloured plates, thicker in the center than at the edges. these are Spangle galls of the gall wasp Neuroterus quercusbaccarum.

With the leaf fall the Spangle galls come to the ground, and as the leaves decay they become separated. In the spring female wasps emerge from the galls. They are able to reproduce their kind parthenogenetically and do so by depositing their eggs in the young leaves and the leaf buds of oak.

Spangle galls on the under side of oak leaves.

Courtesy of Roger Griffith who put his picture in the Public Domain.

The familiar oak apple gall is another example formed by a Cynipid with alternating generations. Its winter form make root galls on the same tree and the insects subterranean home is protected from winters weather.

Images may be reused. However, the name of the relevant author must be attributed along with the accompanying license.