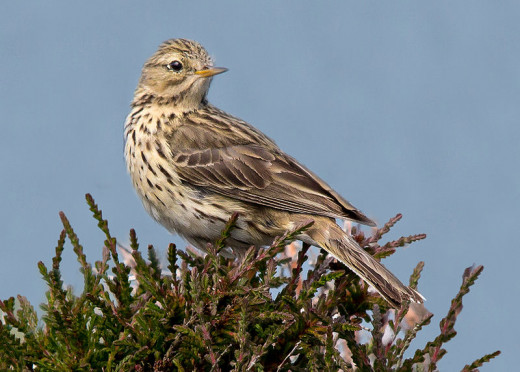 The meadow pipit belongs to the Passeriforms {perching birds} order of birds and are placed in the family Motacillidae. they are given the genus name Anthus [from anthos a small grassland bird escribed by Aristotle} and the specific name of pratensis { from the Latin prate a meadow}.

They breed in Europe and western Asia and winter southwards to Africa. They are a bird of open grassland ,tundra and dunes.

The Gaelic name for the bird is Riabhag-mhonaidh, the Welsh ,Corhedydd y Waun and the Irish Riabhog Mhona. They have over the years acquired many local names such as the Titlark, Hill Sparrow, Mosscheaper,and in Scotland heather peeper. The above information is courtesy of the BTO.

Here we look at the species its lifestyle and habits and as always we commence with a description of the subject under review. 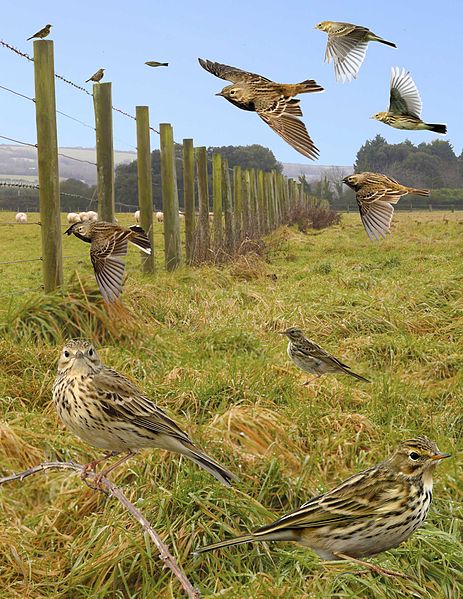 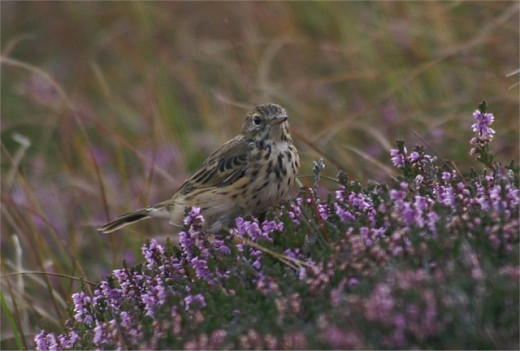 The adult male of the species is olive brown above with blackish streaks on the back, most of the feathers have dark centers, which however, are all less distinctly marked on the rump and upper tail coverts. The wings are dark brown, the primaries with yellowish margins to the outer webs. The tail coverts and secondaries with whitish margins..

The tail is dark brown, the outermost feathers nearly half white and the second pair with a white sub-terminal spot. The breast is evenly streaked as are the flanks, The bird has a pale stripe over the eye.The bill is weak,slim and of a dark colour,there is a dark patch on the sides of the neck. The underside is olive buff or creamy. The legs are pale orange/brown with a very long hind claw. although just a brown bird in general appearance it is worth noting the subtleties and beautiful patterns on its plumage.

The female is very similar to the male, but is sometimes less strongly streaked below. After the autumn moult the colouring becomes less yellowish.

The female is very similar to the male, but is sometimes less strongly streaked below. After the autumn moult the colouring becomes less yellowish.

In relation to its body size the wings are medium short, the neck short, the bill medium short and the legs short. The flight is dipping on the ground it walks or runs. Sometimes perches in trees, especially on migration. They are gregarious outside the breeding season often accompanying skylarks and wagtails.

They convey the impression of a constant nervous energy and awareness. They are similar in appearance to the Rock pipit,the Tree pipit and the Red throated pipit, the latter being a bird that breeds in the extreme Northern Scandinavia but is also a widespread migrant of central and eastern Europe. 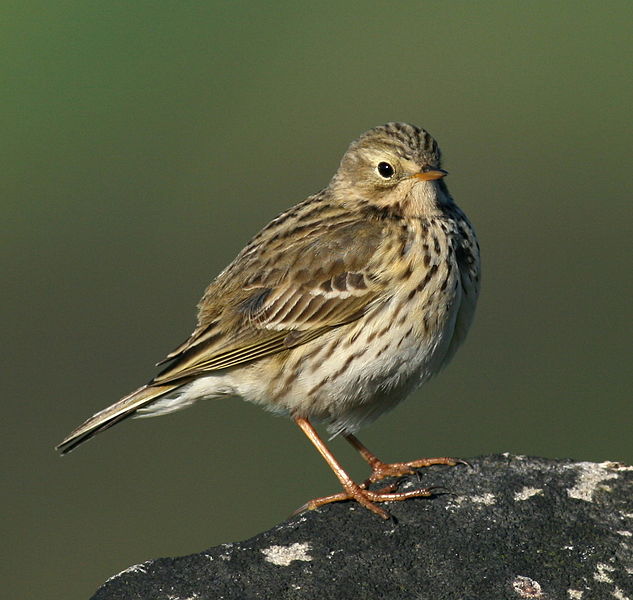 According to Mr.Saunders {1800's} " the breeding range of this, the smallest of our pipits {UK }, extends from the North Cape over the greater part of Europe to the Pyrenees, the northern portions of Italy and the Carpathians, and perhaps to some of the elevated regions,still further south; but in the basin of the Mediterranean the bird is principally known as a visitor on migration and in winter. Eastward it is found in Asia minor,Palestine,Western Turkestan and the valley of the Ob,in Siberia; while its southern wanderings reach North Africa from Morocco to Egypt"

As previously mentioned,throughout the UK the meadow pipit is known by a variety of local names, such a Titlark,Moss cheeper, Ling bird among many others, where it is resident and generally distributed. they are most abundant in summer on upland moors, but is by no means confined to the mountains for they may be encountered throughout the yaer on the open commons,farm land and pastures of the plains. During the winter the high exposed regions are deserted in favour of better sheltered localities,and in particular those of the seashore.

In its habits as the name suggests ,it is much less arboreal than the Tree pipit perching more frequently on bushes,rocks,or low walls than on trees. Its flight is similar to that of the Wagtails and often indulges in an upward song flight.

Stevenson in his ''Birds of Norfolk' {east England} states " the meadow pipit or Titlark is one of the most common of our resident species; on heaths and commons and by the banks of rivers,in meadows and marshes, on the grassy summits of our lofty cliffs or the low marram hills upon the sandy beach, the cheeping note of this familiar bird, meets us at every turn, and in more cultivated districts, it springs at our approach from the arable land,and,drifting like waste paper down the wind, is gone with a 'yhit,yhit,yhit' call almost before we can fairly see it."

" In summer it is nowhere more common than in the district of the broads, where it sings from the top of a small alder or sallow branches,which are scattered in many places over the drier marshes,and cheeping as it ascends from a projecting spray,utters its simple but pleasing song with quivering wings and outspread tail, as it slowly descends to its station again"

The above statement certainly characterizes the bird very well. It was classed wrongly with the Larks, one of its ols Latin names was Alauda pratensis, however, the old name of Tit lark was still commonly used when referring to this species.

The food of this species in the summer consists of insects and their larvae,spiders,small caterpillars and centipedes,small worms and fresh water molluscs. however, in winter when insect food is not available small seeds or even grain is taken. At the seashore they may be encountered running nimbly about the accumulations of sea weed, searching for anything in the shape of food that presents itself. 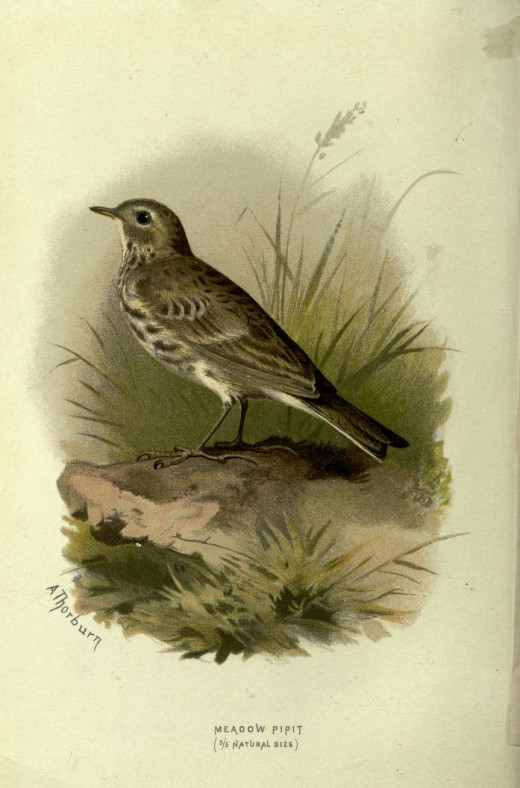 Birds were once kept {quite legally} in aviaries and as cage birds, there follows some historical observations of these birds kept in confinement it is now illegal {in most countries} these references have an historical value in avian history.

Butler {1907 } states; " My first impression of the Meadow pipit as an aviary bird was in October 1888,when a bird catcher brought me a male example which I turned into my outer aviary. I found it perfectly harmless and amiable towards the other inhabitants of the aviary, until other specimens of its species were associated with it; and, having no mate of its own, it took a great fancy to a hedge sparrow {Dunnock}, but the latter had already made up to a Garden warbler.. I recorded this in the 'Zoologist' for July 1889 as follows---I frequently noticed my hedge sparrow following the garden warbler about, and trying to entice him to pair with her; on one occasion I noticed her behaving in a similar manner towards the Pied wagtail, but both birds treated her with the utmost indifference; the meadow pipit,however, strutted about in the greatest excitement, and tried in every way to make up to her, though she constantly gave a peck he advanced near to her--"

Butler continues " In November,1889,nine meadow pipits were brought to me by a bird catcher who sold them to me at two pennies a piece;hey were all freshly netted and very wild. I turned the whole of these birds out with that received the previous year, and hoped that I would have the pleasure of hearing some of them sing in 1890.; but first the hedge sparrow attacked them and killed several of them, and then they began to quarrel among them selves, fighting like little game cocks whenever they met, so that by December only two remained alive, and even one of these fell victim to its injuries before the end of the year,leaving a solitary hen."" To look at these elegant little birds one would never imagine that they could exhibit evil passions; but my experience, clearly demonstrates the danger of attempting to keep more than one male in an enclosure. the female which remained and so sprightly a bird, that for some months I imagined her to be male,eventually proved her sex by laying eggs in a nest built by a canary in one of the bushes, about two feet from the ground; it was an odd place for a meadow pipit to lay in , but perhaps not so remarkable as the fact that a canary, turned loose in an aviary, and having no model to guide her, should have reverted to the ancient nest of her species, which her ancestors ,probably for hundreds of years had never seen"

Nesting usually begins in April, the nest always being well concealed and invariably upon the ground, frequently in a meadow, or on swampy ground among reeds, on a bank half hidden by coarse grasses. It has also been known to nest in ling {heather}, at the foot of a bush and in cavities under an overhanging bank or stone.

Like the skylark this bird,alights in a standing manner and when on the ground, runs along through the vegetation to the nest. The materials employed in the construction consists of dry bents,and sometimes a little moss,with a lining of finer grass or rootlets and hair. Like other nets it varies in bulk and compactness.

The eggs are similar to those produced by the Rock pipit excepting that they are smaller. Four to five make up the clutch, which are of a greyish,or greenish white ground colour more or less densely mottled with olive-brown, often forming an ill shaped zone towards the larger end, where also dark hair lines are frequently present.

The eggs are incubated by the female for a period of about 13 to 15 days. The nestlings are assiduously fed by both parents on insects . The Rev.Morris conveys to us " This is one of many different kinds of birds which feign injury, in order to entice away apparent intruders from her young, in whose safety, and even in feet of the nest and eggs, they display the greatest interest".

When they are able to leave the nest in a further 12-14 days, they remain near to their home feeding on insects or small seeds and may join flocks with other with others of their kind or even wagtails.

During the autumn the number of resident birds is greatly increased by flocks travelling southwards which stay with us {UK} until the following March. Towards September they become restless and slowly move southwards from their more northern localities in Europe seeking warmer climes.

Meadow pipit in the snow. 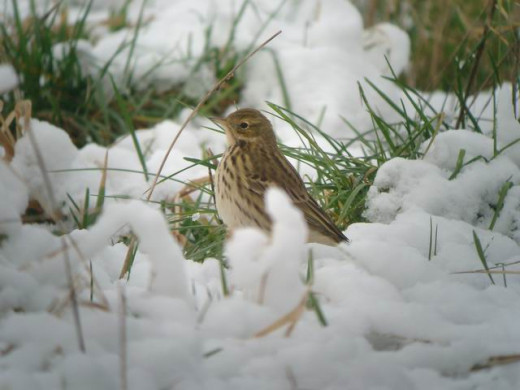 UK-Amber list due to declines in population/distribution of over 25% in the last thirty years or so.

Reuse of images. The images on this page may be reused, however, the name of the relevant author must be attributed along with any accompanying license.

Thank you for living.