Two plants that cheer up the countryside with their yellow blooms are the marsh marigold and the primrose. The first of these under review is the marsh marigold, Caltha palustris, which has acquired a range of country titles which includes King cup, water blobs, horse blobs, bull's eyes, meadow routs and marsh blob.

The common name and marsh blobs are apt descriptions of this plant for wherever muddy conditions prevail this plant will thrive, and is very likely to be encountered. In such situations it is one of the first species to brighten up the locality with its bright yellow buttercup like flowers.It is a common species wide spread in its distribution.

Below---the numerous stamens are clearly visible in the center of the flower. Courtesy of Petar Milosevic. CC BY-SA 4.0 License 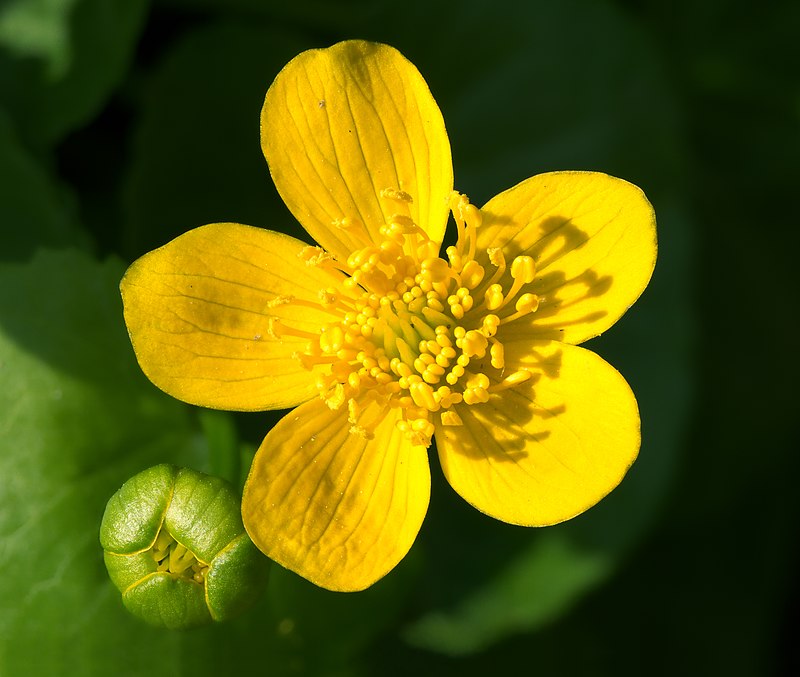 Basic biology of the marsh marigold.

The root system is a stout creeping rhizome which send up fleshy stems about 30cm {1 foot tall}high. These stems are hollow and sometimes erect in habit but demanding on the growing situation they may lie across the ground in this situation the stems may root at intervals. Other times they spread out over the water. The whole plant is hairless.

The foliage is in the main basal which occur on long stalks, they are kidney shaped to heart shaped relatively large and glossy.

The stem leaves are on very short stalks and they tend to be more pointed in form. They are finely toothed along their margins. The bright golden yellow buttercup like flowers appear from mid March until June and are borne at the end of the stems which split into two grooved flower stalks each bearing a single bloom.

The individual flowers are up to 5cm across {2 inches} but they are usually a  bit smaller than this. The flowers produce many quite visible stamens which are numerous. In common with many of their relatives such as the wood anemone, the flowers do not have petals but petal like sepals {tepals}. These buttercup like flowers confirm that they are a member of the Ranunculaceae. All members of this family are poisonous in varying degrees, the marsh marigold  is no exception. It is regarded as being "mildly" poisonous and not recommended for internal use.

a, It alludes to the past uses in church festivals, particularly in the Middle Ages, as being one of the "golden flowers" dedicated to the Virgin Mary, ie, Mary's Gold.

b, Some believe that the name derives from the Anglo Saxon name for the plant merso meargella.

The following notes are to be taken in an historical context as the plant is not recommended for home made preparations, either medicinal or culinary purposes. Every part of the plant is considered to be an irritant.

An infusion was once used to relieve the symptoms of fits in both children and adults in well diluted doses, a tincture of the herb was used to treat the symptoms of anemia.The buds have been used as capers, but this is no longer recommended. Although some of the poisonous properties are somewhat diminished by being soaked in vinegar compared to the fresh plant.

The leaves have been cooked and eaten in the manner of spinach in days gone by.

Apart from the native species Caltha palustris there are also other species of the plant that are suitable for the garden situations, such as C.introloba which is a tuft forming perennial, a small growing herb 5-6cm. They produce dark glossy foliage which oval to oblong in form. The erect flower stems bear goblet like flowers and they bloom in late winter. This is an excellent species for containers or in an alpine house. It prefers shade and is difficult to grow in hot,dry climates.

C.leptosepala,which is classed as a deciduous perennial for water sides and the margins of ponds.They have dark green leaves and buttercup like flowers which are white and produced in spring. They attain the height of 25cm {ten inches}

A sheet of primroses in an open woodland and other aspects of light shade are a joy to encounter in spring. The rootstock is perennial and knobbly in nature, which bear the original base marks of fallen leaves. It is surrounded by many branches rootlets.

The foliage is egg shaped and oblong about 12cm long {6inches} when they are fully developed, tapering into a winged stalk.The veins are prominent beneath and hairy,the margins are irregularly toothed.

The flowers are borne upon separate stalks.primrose flowers are instantly recognizable to most people but those of a more inquisitive nature will note the plant produces two types of flower. Looking at these two types of flower as one does from above they look to be almost identical. They will only be distinguished by close attention to their detail. The two types appear on different plants and the two will never be encountered on the same plant. They are known as pin eyed flowers and thrum eyed flowers, but this is commonly shortened to pin flower and thrum flower.

Below flowers of the primrose 'thrum type'

This complex arrangement ensures pollination occurs by insects that possess long tongues insects such as bees and moths.

The primrose has long been used medicinally, but more so in days gone by. The whole herb was utilized with different components being employed in various ways. The roots of 2-3 year old plants were dug up and thoroughly cleaned in cold water then dried. Infusions of the root was taken in small doses as an effectual remedy against nervous headaches. A small dose of the powdered root was employed as an emetic.

The plant was considered to be sedative in nature. An infusion of the flowers was formerly given to patients that displayed hysterical disorders. Most of these uses have now been replaced by other herbs which are thought to be more efficient.

The species of the genus Primula are varied and employed in all their forms in gardens to brighten up the last dark days of winter, to cheerfully meet the spring. The primulas split into groups which are known as the Candelabra, Polyanthus and Auricula.

Those that are more directly linked to the primrose in form and foliage shape has been bred to display some beautifully coloured flowers. The name primrose derives from the Latin prima rosa the first rose alluding to their early flowering period.

Below. The red flowered polyanthus type.

ASSOCIATED PAGES-Click on the content banners at the top of the page.

Other species of flora featured on this site may be viewed by clicking on the individual content banners { they are all grouped together.}

Flora via links. Click on the links banner at the top of this page. Scroll down to relevant box. Click , this is a direct link to the article{s} Includes the series  Past and Present Medicinal Uses}.