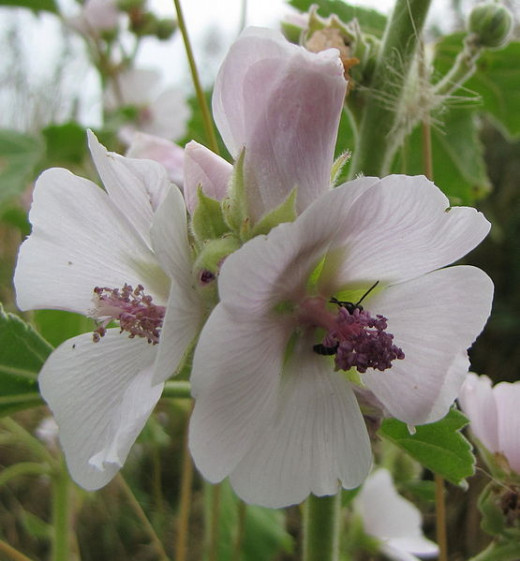 Althea officinalis , commonly referred to as the Marsh mallow belongs to the Order of Plants known as the Malvales and the Family Malvaceae. They have been allocated the genus name of Althaea from the Greek althainein indicating to heal. The specific name officinalis indicates that it was sold as a drug at the Apothecary.

Here we look at the plant and its past medicinal uses in herbal medicine, along with other uses. As always an apt place to commence the review is by a description of the plant.

Swamp Mallow. The name Marsh Mallow was once mistakenly attributed to this plant. 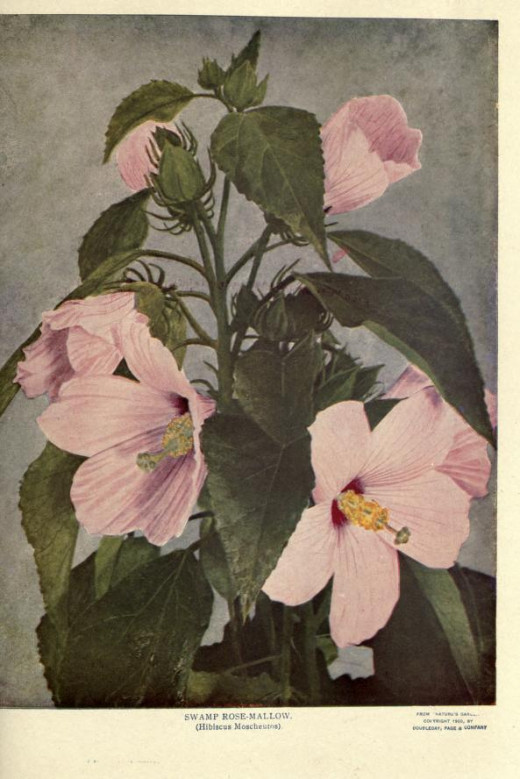 The stems that die down in autumn are erect three to four feet in height, { 90-120 cm }they may be simple or putting out a few lateral branches. The leaves are short stalked, roundish to oval -cordate two to three inches long { five to seven and a half cms }and a bout one and a half inches { three -four cm } broad. The foliage may be entire or three to five lobed. they are irregularly toothed at the margins and quite thick in depth. They are soft and velvety on both sides due to the dense covering of stellate hairs.

The flowers are shaped, like those of the common mallow but are smaller and of a paler colour.The stamens are united into a tube and the anthers are kidney-shaped and one celled. The flowers are in bloom during August and September, and are followed, as in other species of this order, by the flat round fruit which are often referred to as 'cheeses'.

Confusingly, here in Britain, the Common Mallow Malva sylvetris was called by country people-'Marsh mallow', but the true Marsh mallow is distinguished from all other species of Mallow growing in Britain by the numerous divisions of the outer calyx {sepals etc} which have six to nine cuts, and also by the hairy down which thickly clothes the stem and foliage.

It also seems to have caused some confusion in the United States. According to Neltje Blanchan in her book ' Nature's Garden' states "It is covered with the velvety down as a protection against the clogging of its pores by the moisture arising from its wet retreats. Plants that live in the swamp must perspire freely and keep their pores open. Althaea officinalis was once frequently applied to the Swamp rose mallow. The flowers which are one and a half inches across, and a much rarer species having naturalized as a migrant from Europe. It was also referred to as 'wymote'. Another species from Europe that has naturalized in many waste places is the plant referred to as the High mallow, Cheese flower or round dock. Another relative the Okra or gumbo plant of vegetable gardens Hibiscus esculentus, has mucilage enough in its narrow pods to thicken a potful of soup"

The root of marsh mallow is perennial, thick long and tapering it is pliant of a whitish yellow on the exterior and white and fibrous within.

Public domain Courtesy of the BHL. 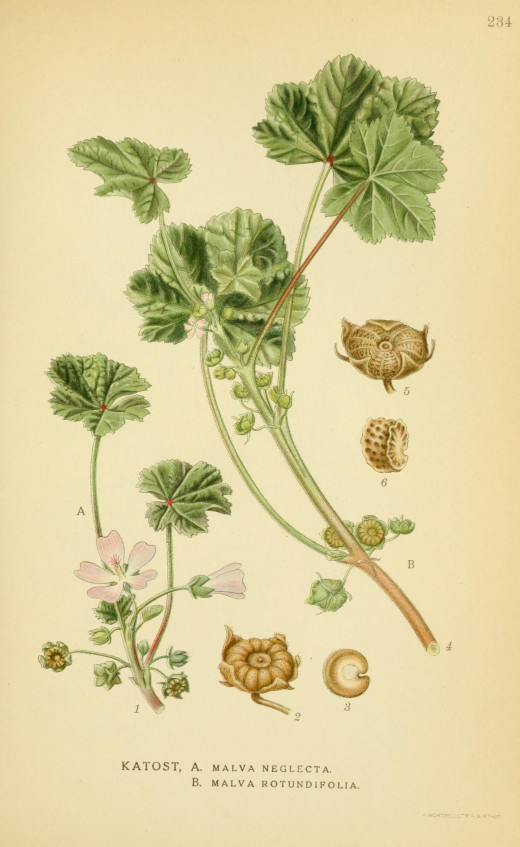 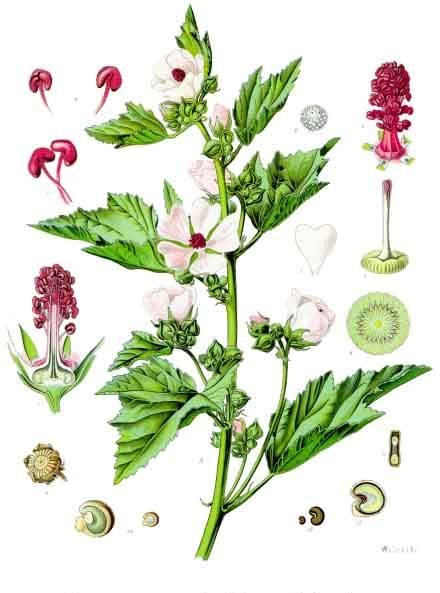 Archaic herbals describe the qualities of this species thus- The root of Marsh mallow is about the thickness of a man's finger, covered with a greyish epidermis, which is coloured white internally, it is sweetish and very mucilaginous when masticated. It contains more than half its weight of sweet and viscous mucilage, which is also found in other parts of the plant ,but in less quantity.

The mucilage was obtained by means of a decoction in water, and it turns, on cooling, into a trembling yellowish jelly. Leo Mayer, discovered in the dried root, mucilage with malic acid and several salts, sweet extractive matter, starch, inulin and woody fibre. The supposed principle named Althein proved to be Asparagin, which exists in the root in small quantities. 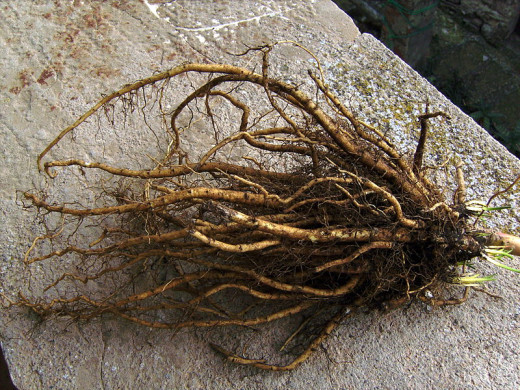 The earliest medical authorities extol the virtues of this plant. Dioscorides recommended it in many diseases against which it was employed until at least the 1800's and to some extent even up until the present day. Pliny {AD 23-AD 79} stated that Hippocrates { 460 BC-370 BC } the Greek physician { referred to as the father of western medicine} administered the decoction of the root to those labouring under loss of blood, asthma,or dysentry, and that he also applied it to contusions and lacerations of the muscles and nerves.

It has been considered to be emollient, demulcent, lubricating and anodyne {relieves pain}, and has consequently been employed for allaying heat and irritation, and to diminish the pain of inflamed parts. The infusion or decoction has been especially recommended in the first stage of acute phlegmasiae, in active hemorrhages, diarrhoea, sysentry and nephritis {inflammation of the kidney}.

Externally it was employed in numerous afflictions; in decoctions as a fomentation for the eyes in acute ophthalmia { Inflammation of the eyes including conjunctiva}, from the Greek ophthalmos -the eye. In external abrasions and in cutaneous {affecting the skin from the Greek cutis- the skin} eruptions accompanied by a sharp ichorous discharge; As a gargle for the throat and gums.

In the form of a lavement it was considered very useful in dysentry, peritontitis {when the lining of the abdomen is inflamed } and inflammation of the bladder. I found the following recipe in an old herbal for the Syrup of Mallow-----

Boil down the water with the root to one half, and press out the liquor when cold. Set it by for twenty four hours that the dregs may subside. Then pour off the liquor, and, having added the sugar boil down to a proper consistence.

Take of the Marsh Mallow root, dried and bruised ---4 ounces

Mix them and boil them down to five pints. Strain the liquor and set it aside that dregs may subside and then decant.

This was considered to be a useful demulcent {soothing} inflammations, in the dose of a cupful-taken frequently.

The more modern herbals recommended the plant as being good in the treatment of acnerosaceae, diarrhoea, heart burn, indigestion, cystitis, Boils, asthma and affliction of the kidney stones.

They recommended that the root is harvested in Autumn when the mucilage is ' in its highest concentrations' . A syrup was made from the flowers or the leaves to treat coughs and sore throats.

Culinary uses-----Most of the mallows have been used for food and are mentioned by classical writers. Mallow was an esculent vegetable among the Romans, a dish of marsh mallows was one of their delicacies.

When boiled first and fried with onions and butter the roots were said to be a palatable dish and in times of scarcity helped the poor of countries such as Syria and Armenia to subsist in days gone by. In France the young tops and tender leaves of Marsh mallow were eaten uncooked in spring salads.

** The above paragraphs are meant for historical interest only and not as a guide to self medication see modern day assessment below. It appears that the Marsh Mallow is considered to possess bactericidal and anti-inflammatory properties.There is no clinical evidence to guide the doses of marsh mallow. According to the site Drugs.com the classical doses of the root or leaf in cough and bronchitis relief was six grams.

There is no data for assessing any impact of the drug as regards pregnancy. As regards adverse reactions there is little information documented, there is no known poison associated with the drug.

The mucilage from marsh mallow has been used as a constituent of ointments made with purpose of soothing chapped skin, it has also has been added to food in small quantities to provide bulk and texture.

The fresh leaves or dried leaves can be used to make cold infusions { the mucilage being much diminished by hot water} to drink as a treatment for inflammation of the respiratory and urinary tracts. The infusion should be left overnight to fully infuse.

A syrup can be made from the flowers commonly referred to as 'pink flower syrup' can be produced to treat coughs and sore throats. the flowers and young leaves can be added to salads. The leaves and roots can be eaten as vegetables. The root having been boiled and fried.

For home use it can be used to make a gargle for mouth and throat infections. Leave two teaspoonsful to stand in 250 ml of cold water for half an hour. Drink 1-3 cups {warmed up} daily or as a gargle. 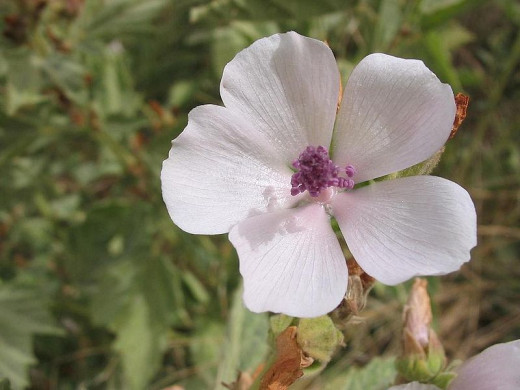