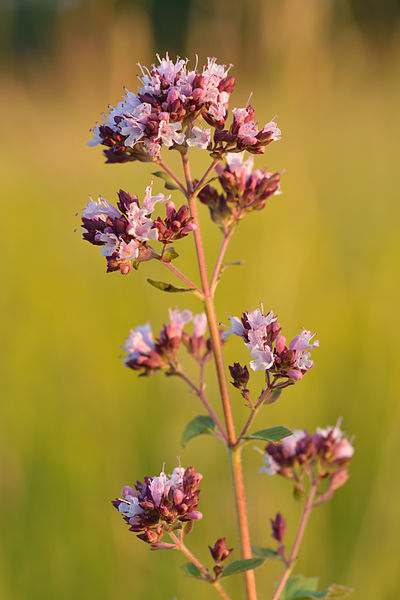 Wild marjoram belongs to the family Lamiaceae {mint family} Labiate} and as been given the species name of Oreganum which derives from the Greek words meaning Mountain joy, From  oros -mountain+ ganos -joy which alludes to the habitat these plants inhabit. It is sometimes confusingly called marjoram Origanum marjorana, the sweet marjoram which is cultivated for its aromatic leaves and used in culinary preparations.

In ancient times, Oreganum vulagre was frequently used by the Greeks, both as an internal and external medicine. It was reputed to be a remedy for narcotic poisons. It has long been used in medicine in many other countries as we shall discover in the text. Here we review the species with notes from past herbalists and physicians along with modern day uses. As always an apt place to commence this review is by giving a description of our subject.

Sweet Marjoram is cultivated for its aromatic leaves. 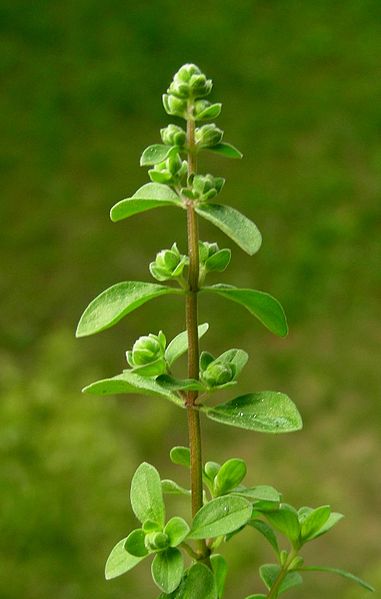 The root of this species is perennial, creeping, and furnished with numerous slender fibres. The stems are erect, leafy and square , it may be purplish in colour clothed with short downy hairs. It is branched towards the top. It attains the height of 12-18 inches { 30 45 cm }.

The leaves are arranged opposite to each other with entire or very slightly serrated margins. They are broadly egg-shaped and fringed with short hairs.

The flowers are at the ends of the branches in dense spike like heads, each individual flower has bracteas {small bracts} just below them which are longer than the calyx. The calyx {sepals etc} is cylindrical, striated, the mouth of the tube being clothed with whitish hairs. They have five nearly equal purple teeth. The corolla { petals etc} is of a purplish rose colour the tube enlarged upwards, longer than the calyx. The upper lip is erect, obtuse, the lower lip has three nearly equal rounded lobes the middle lobe crenate {wavy}.

When the individual purple flower opens, the four stamens are ripe and extend well past the mouth, whilst the style is short, and its two stigma lobes are pressed together and immature. According to Edward Step {1887} " The plentiful honey is accessible to many insects owing to the open character of the corolla, and the organs being extended beyond the mouth of the flower, and these densely gathered in to cymes, the carriage of pollen by the insects that crawl from flower to flower is insured.

" After the pollen has shed, the style lengthens until it is larger than the stamens, and then stigma lobes spread out and equally come in the way of the insects."

Until it flowers the species is low growing perennial slightly hairy and with a woody base. They flower in July and August. 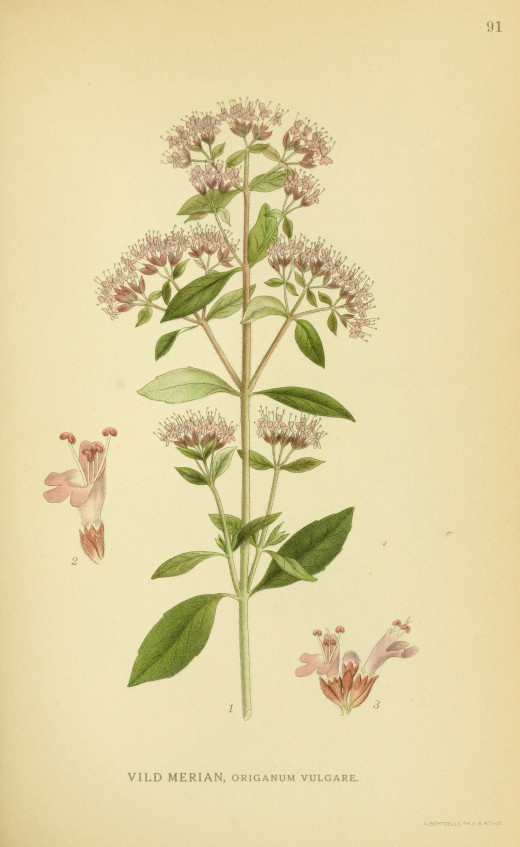 On dry sunny banks, on towering cliffs, enlivening the roadside these handsome and fragrant flowers are relatively common. The name of 'mountain joy' is well deserved for they are found growing at such elevations as to warrant the name.

Country people often gathered the flowers during the autumn in large quantities, some of which were used while fresh for herbal teas, the rest being tied up in bunches to dry for use during the winter months. The herbal tea was said to be refreshing and wholesome, although it is thought by scientists that the herbal tea, as regards health benefits was over rated by country the country people.

In some parts of northern Europe the plant was collected and added to brews such as ale, to prevent it from turning sour along with rendering it more intoxicating.

There are many species of marjoram available to the gardener under the genus of Oreganum, however, here in the UK, only one, the wild marjoram, is native to these shores. Oregano has been a common ingredient in Spanish, Mexican and Italian dishes as a spice and flavouring agent for hundreds of years. It has a warming effect on the digestive system. It has also been used in the cosmetic industry on account of its volatile oil.

Oregano seeds ready for culinary use. 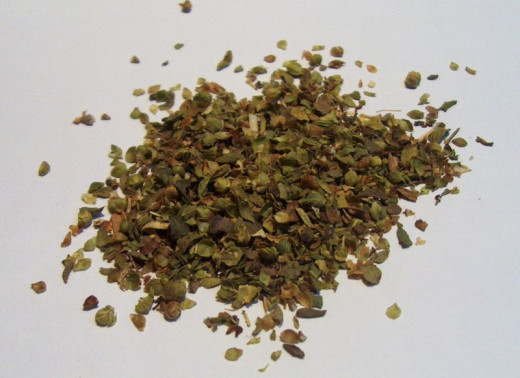 The dried leaves of the wild marjoram have been recommended as a substitute for tea. They have also been employed like the sweet marjoram for culinary purposes, to give relish to soups, omelettes, stuffings and the like.

This plant was a familiar species in cottage gardens and were easily propagated by seeds. { see cultivation below}. from their gardens country people used the flowering tops to dye linen cloth a purple colour. To achieve this it was previously steeped in Alum water,then emmersed for up to forty eight hours in a decoction of the bark of the crab apple tree.

other herbals state that the herb also imparted a bright reddish brown colour to wool, especially if the latter " be frequently taken out of the liquid and beaten"

The leaves and flowering tops have an agreeable aromatic smell, resembling that of the wild thyme, and a warm,pungent,somewhat acrid taste. Water extracts these qualities by infusion and distillation, with that fluid, a moderate quantity of the very acrid penetrating oil was obtained.

it also affords camphor like many other members of the Labiate, and a gum resinous extractive matter, in a great part soluable in water, to which it imparts a red colour. 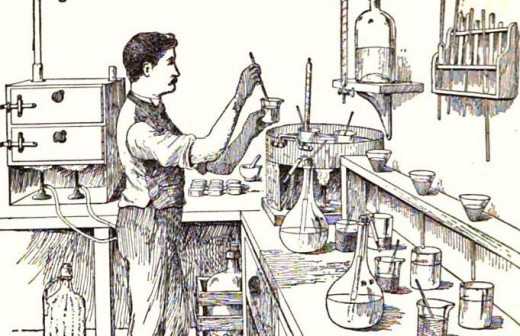 Herbalists listed this species as having tonic, stimulant and carminative properties, hence it was much used to treat asthma, coughs, and various spasmodic affections. it was also considered to be resolutive { capable of dissolving or causing disintergration} , sudorforic { producing sweat or causing sweating} , diuretic and emmenagogue { increases menstrual flow}, but there was some doubt even at that period as to the effectiveness of some of the appellations.

As a tonic and stomachic it was thought to have had some success in obstructions of the lung or superabundance of mucrous secretions, where there was a fever or irritation. Externally it was used in fomentations, or applied in little bags to indolent tumours and swellings, and, either fomentations or baths to ease the symptoms of rheumatism.

In the form of a foot bath, it was thought very efficacious in surpressed menstruation. For that purpose it appears it was mixed with chamomile flowers and others such as thyme, or rosemary.

The tops dried and powdered was given in the dose of one or two scruples {20 grains}. The infusion, or tea , which was at the time much praised, in flatulence, headache, and in nervous and hysterical complaints, was made up with half an ounce of the dried herb to a pint of boiling water. This was taken at intervals through the day.

The volatile oil dropped upon cotton was used to ' assuage the pain of carious teeth' and Lange stated that it even helps the caries { decay of bones or teeth}, in the bones. The powder of the tops is a pleasant errhine { causing nasal secretion}, and and was used in cephalic {head} snuffs.

The juice of this herb was said to be highly stimulating and was used to allay rheumatic pains as well as toothache. it was also 'very properly' applied to sprains and bruises. It was claimed to be a good remedy for the 'falling of hair'.Both flowers and leaves seem to have been much valued in former times.

Parkinson conveys " The sweet marjoram's are not only much used to please the outward senses in nosegaies, and in the windows of houses, as also in swete powders and swete bags, and swete washing waters, but also of much use in physicke, to comfort the outward members and parts of the body,inward also"

He went on to say-The essential oil of the plants is, when undiluted, so acrid that it may almost be caustic. It is secreted in abundance in the leaves and stems and is the cause of the fragrance. It has been suggested that an infusion of the fresh herb is beneficial in the treatment of stomach complaints and indigestion.

Science has revealed that oregano has antimicrobial and antioxidant actions. Although it has been used since ancient times as a medicine, attempts to characterize its properties only began in laboratories in the 1900's..

There is some evidence to suggest that large quantities of oregano, may in some cases, lead to a eczematous reaction. Whilst it is regarded as being safe for pregnant women to eat Marjoram/oregano in amounts that are a constituent of food products, it is not thought advisable to take extra amounts {such as herbal medicine} because at this point of time safety and efficacy are unproven.

Side affects of marjoram----reactions to the skin have been recorded. The allergic reaction may cause a rash, and in rare cases sever whole body reactions have occurred. if you are trying marjoram for the first time {or indeed any other herb} just try a small amount first, to test your body's tolerance.

A simple home made infusion for coughs and colds, and to stimulate appetite can be produced by infusing one teaspoonful in 250 ml of boiling water for five minutes. It may be sweetened with honey to taste. Take one cup twice daily. Again you may wish to take just a few sips to test your tolerance level. 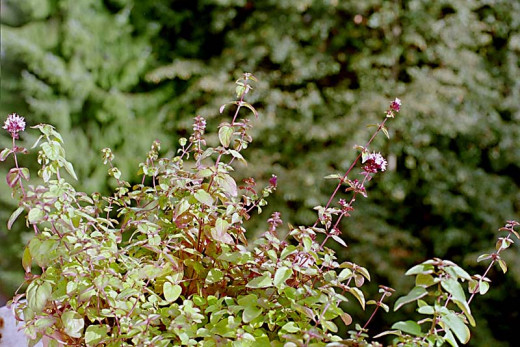 Marjoram was once a common and familiar kitchen herb and as such it was cultivated for use of their aromatic leaves, either in a fresh or dried state, for flavouring, and it was once a main ingredient of stuffings.

The plants tend to enjoy warm sunny situations in a dry light soil.. It is generally increased by cuttings taken in early summer, inserted under glass and later planted out around one foot apart, and if in rows, the rows should be also one foot apart as it likes to have plenty room. It may also be increased by division of the roots in April, during May they grow quite quickly after the operation.

They can also be propagated by seed, sown moderately thin, in dry, mild weather during March, in shallow drills or containers. the seeds should be covered by half an inch of soil and eight or nine inches apart. Marjoram seeds can be very slow to germinate.

Oregano growing in a container. 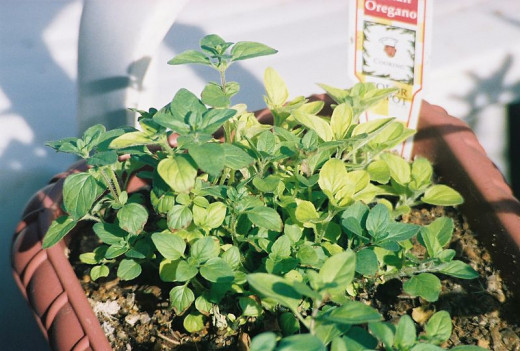