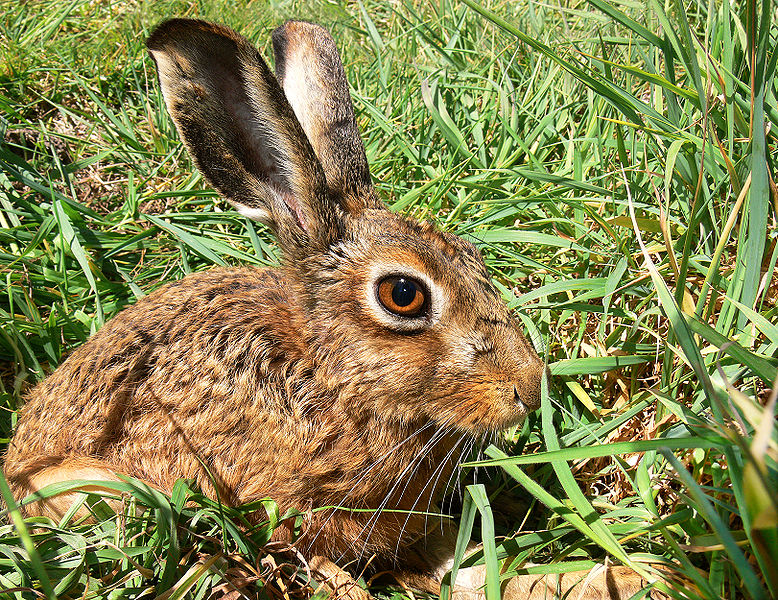 The brown hare is found mainly in lowland arable or pastoral land. It is frequently found in open areas, where it uses its swift running speed to evade predators, but it also requires shelter for resting and breeding. Its abundance is positively associated with habitat and plant species diversity, the presence of hedgerows, and unfarmed habitat (Tapper and Barnes, 1986; Smith et al., 2004; Lush et al., 2014), and negatively associated with grazing intensity. The brown hare selects habitat based on structure, rather than the availability of nutrients, which is thought to result from the need for cover from predators and for surface resting sites (Smith et al., 2004; Lush et al., 2014). Population density may be adversely affected by shooting, competition with farm livestock for food, and the intensification of agricultural practices (Hewson and Hinge, 1990).

In Harris et al. (1995), population size estimates were 817,000 in total, comprising of 572,000 in England, 187,250 in Scotland, and 58,000 in Wales. These estimates were provided by the first National Brown Hare Survey, which was later published by Hutchings and Harris (1996). These figures were derived from extensive surveys and subsequent population density estimates, grouped by land class rather than habitat type, and included occupancy data by incorporating sampled areas with no detection of hares. By contrast, the current estimate is based on the two main habitats for brown hares only. Nationally, there are changes between the two reviews in the estimated availability of key habitats (arable land and improved grassland), generated by a combination of true change and methodological differences, irrespective of any range change (see Sections 2.3 and 32.3 for further details).  Adjusting the results to reflect more probable temporal changes in the composition of the British landscape — using differences between the 1990 and 2007 Countryside Surveys (Carey et al., 2008) — produces a population size only 5% different from the original (and within the original confidence limits). These methodological differences are therefore unlikely to affect comparisons between the two reviews materially.

Although the population size estimated by Harris et al. (1995) is higher than the current estimate, it falls within the confidence limits. This fact, coupled with the differences in methodology and habitat associations, means it is difficult to make direct comparisons between the current review and that of Harris et al. (1995). Following the first National Brown Hare Survey, which estimated brown hare population size to be 817,000 in 1991-1993 (Harris et al., 1995; Hutchings and Harris, 1996), a second survey in 1997-1999 (Temple et al., 2000) estimated the population to be 752,608 (95%CI = 714,911-790,305). As this decline is relatively small, its significance is difficult to determine.

Population size estimates were based on density data for arable habitat and improved grassland only. Although brown hares may be found elsewhere, arable land and improved grassland constitute their core habitat. The use of occurrence data from other habitats was judged likely to introduce double counting, because most animals observed here would already be accounted for in the arable and grassland data.

Twelve papers and one NGO report were found for the brown hare, where seven contained pre-breeding estimates of population size, five contained post-breeding estimates or temporal trend data, and one contained occupancy data (Hutchings and Harris, 1996). Percentage occupancy was measured as the number of positive 1km survey squares (456 of 738); habitat-specific occupancy values were not available so this percentage was applied to all habitat. The population estimate for brown hares is based on densities in arable and horticultural habitats (73%), and in improved grassland (27%.  Twelve and 14 individual estimates, respectively, were obtained for these habitat types. Although population size was adjusted to reflect occupancy, these data are not habitat-specific; the brown hare population is also patchily distributed throughout the country, with 19% of occupied squares found in three counties (Hutchings and Harris, 1996). Percentage occupancy data are therefore likely to introduce inaccuracies when applied to the whole country.

The mountain hare in Scotland is found primarily on heather moorland at an altitude of 300m to 900m (Flux, 1970). In the Peak District, the species was introduced in the late 19th century for sport, having been extinct during historical times (Anderson and Yalden, 1981), and is found primarily in areas of common heather and cotton-grass (Harris and Yalden, 2008). During the day, it uses resting sites at higher altitudes, creating forms in areas with extensive cover. At night, it travels to lower ground to use hill pastures, areas of wild grassland or high altitude moorland to feed: the preferred food is the current year’s growth of young heather (Hewson and Hinge, 1990). Where available, woodland is often used for shelter (Thirgood and Hewson, 1987), protection from predators and additional food sources (Patton et al., 2010). The home ranges of mountain hares are notably bigger than those of brown hares. Day resting sites and night feeding sites are often located a relatively large distance apart, owing to the patchy distribution of food and suitable resting places (Hewson and Hinge, 1990). Population densities are higher on moorland overlying base-rich than acidic rock, and in the east of Scotland compared to the west. The highest densities occur on moorland managed for grouse (Harris et al., 1995).

No percentage occupancy data were available; the population size is therefore overestimated for this species. The estimate is also derived from just one habitat type (dwarf shrub heath). The exclusion of areas classified as montane habitat means that all areas above 600m are removed, regardless of habitat type. Areas of heather moorland do, however, exist above 600m in the central and eastern Highlands. As mountain hares range up to 900m, a cut-off of 600m will certainly have excluded some occupied suitable habitat. In the north west of Scotland, the montane zone can descend to 300-400m, while in the east it can ascend above 600m. In the north west of Scotland, therefore, some montane habitats will be included in the LCM ‘dwarf shrub heath’ category, while in the east, some nonmontane heaths will be excluded. Sole use of dwarf shrub heath habitat for the estimates may also exclude extensive areas of moorland dominated by grasses (mainly in the western Highlands), although mountain hares are present at low density in these areas.

The population density of mountain hares is highly variable under differing environmental conditions within dwarf shrub heath, with particularly high densities in moorland managed for grouse shooting (around 30-69km-2, but exceptionally 200km-2 or more (Harris and Yalden, 2008)), as well as in the eastern parts of Scotland compared to the west coast. The population density estimates used in the current assessment are all taken from one location on moorland managed for grouse in the central Highlands. These estimates do not, therefore, represent the range of densities likely to be found over the species’ distribution, but are based on areas with favourable habitat. Despite the considerable uncertainty surrounding the estimates of population size, surveys in the Peak District National Park suggest a population size of 1,500-5,000 in England (Thomas Rhodri, Peak District National Park Authority, pers. comm.) which accords with our estimate

Harris et al. (1995) estimated the total population size to be approximately 350,500, comprising 350,000 in Scotland and 500 in England. This estimate was based on mean densities of 2km-2 on the Scottish Islands and north west of the Great Glen, and 20km-2 within the rest of their range. These densities were not habitat-specific, but applied to the occupied area within the species’ range, where 50% of the area was assumed to be occupied. As the current estimate is based on dwarf shrub heath only, a comparison of population sizes between the two time periods is not meaningful because of methodological differences.

There is a page on this site about the Brown Hare. Lifestyle breeding  etc. Click on the relevant content banner above and scroll down to view.