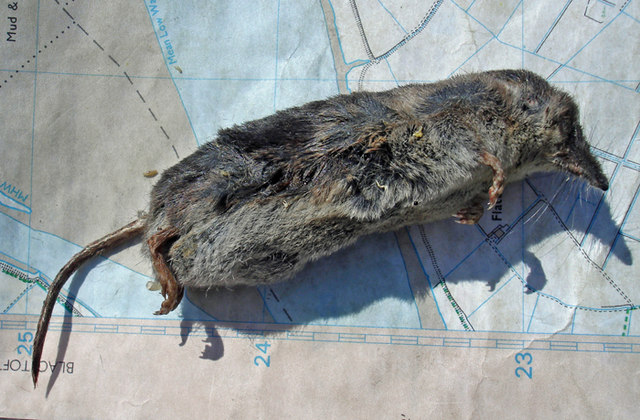 The common shrew is found in most terrestrial habitats, providing that some low vegetation cover is available. It is most abundant in thick grass, bushy scrub, hedgerows and broadleaved woodland. Fallow land, roadside verges and urban habitats are colonised rapidly. At high altitudes, it is occasionally found among heather and more frequently in stable scree (Harris et al., 1995). Its very high energy requirements, the result of its high

surface area:volume ratio, means that it requires habitats with high invertebrate abundance. It may therefore be negatively affected by changes to agricultural practice and/or pesticide use which reduce its prey availability. There is very little research in the recent literature: most records are reported as part of multi-species small mammal studies.

Gaps in the species’ distribution throughout the mainland are likely to represent areas lacking survey effort, rather than true absences. Further survey effort is recommended in these areas to increase confidence in the current distribution. As many small mammals in arable land are known to use field margins as primary habitats, with cropped areas incorporated into home ranges only before the harvest (Tattersall et al., 2001), we assume that the population within fields will be captured in the estimate for hedgerows. Arable land is therefore excluded from the analysis.

No percentage occupancy data were available for most habitats; therefore, the population size estimate for this species is an overestimate. Although most of the land cover within the species’ range is improved grassland ), population density in this habitat is thought to be small. This density estimate is based on the opinion of one expert; any uncertainty in this estimate will affect the population size estimate. In addition, at least some of the animals included within density estimates for improved grassland are likely to be individuals that also live in hedgerows, potentially introducing an element of double counting. Deriving robust estimates for improved grassland is therefore considered a research priority. Most of the estimated population is derived from unimproved grassland habitat (24%), for which the average density estimate is supported by 18 estimates; and from bog (32%), for which values were based on data from Shore and Mackenzie (1993) provided by the authors. The population density for bog habitat reported in Harris et al. (1995) was markedly lower, at 0.5ha-1, although this value was based on expert opinion rather than empirical data. An increase in population density of this magnitude in the last 20 years is unlikely, and so further data are urgently required to increase confidence in the density estimate for this habitat

Harris et al. (1995) estimated population sizes as 41,700,000 in total, with 26,000,000 in England, 11,500,000 in Scotland and 4,200,000 in Wales. These estimates were made using sparse data on population density, which can be highly variable within each habitat. Similar uncertainties persist in the current estimates, where the confidence limits range from 6 million to 58 million individuals. This level of uncertainty means that no inference can be made about temporal trends. 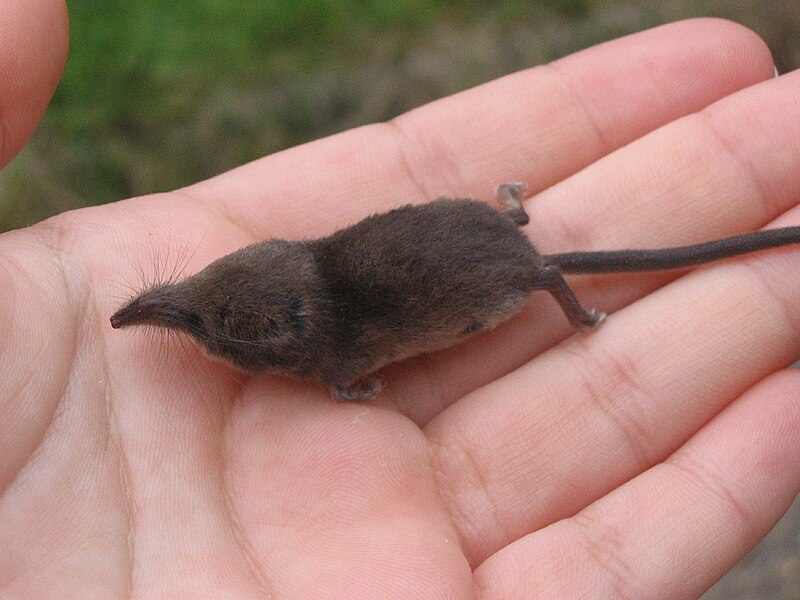 The pygmy shrew is found in all terrestrial habitats and shows a preference for areas with dense ground cover, particularly unimproved grasslands (O'Keeffe and Fairley, 1981). It

frequently uses surface burrows through thick vegetation or exploit the abandoned burrows of other species. Abundance is high in wet habitats, such as moorland and blanket bog (Croin-Michielsen, 1966), and also in ditches and on the edges of riparian habitats. Its very high energy requirements, the result of its high surface area:volume ratio, means that it requires habitats with high invertebrate abundance. It may therefore be negatively affected by changes to agricultural practice and/or pesticide use which reduce its prey availability. There is very little research in the recent literature: most records are reported as part of multi-species small mammal studies.

Harris et al. (1995) reported a total of 8,600,000 pygmy shrews in Britain, with 4,800,000 in England, 2,300,000 in Scotland and 1,500,000 in Wales. These figures are based on the ratio of pygmy shrews to common shrews, which itself was derived from very sparse population density data. Our estimate is based on expert opinion with empirical data for one habitat type only, and so is also highly uncertain. The difference in population size estimates is, therefore, likely to be caused by methodological differences, rather than any true change in population size.

Population trends in England and Wales are stable there is insufficient data from Scotland.

Gaps in the distribution in England and Wales are likely to result from a lack of survey effort, rather than true absences. It is less clear whether larger gaps in Scotland represent true gaps in distribution or are influenced by survey effort. Further surveys are recommended in these areas to increase confidence in the current distribution

As the same animals are likely to use the cropped area and the field margins (hedgerows and buffer strips), we have excluded the estimate for arable fields to avoid counting the same animals twice. 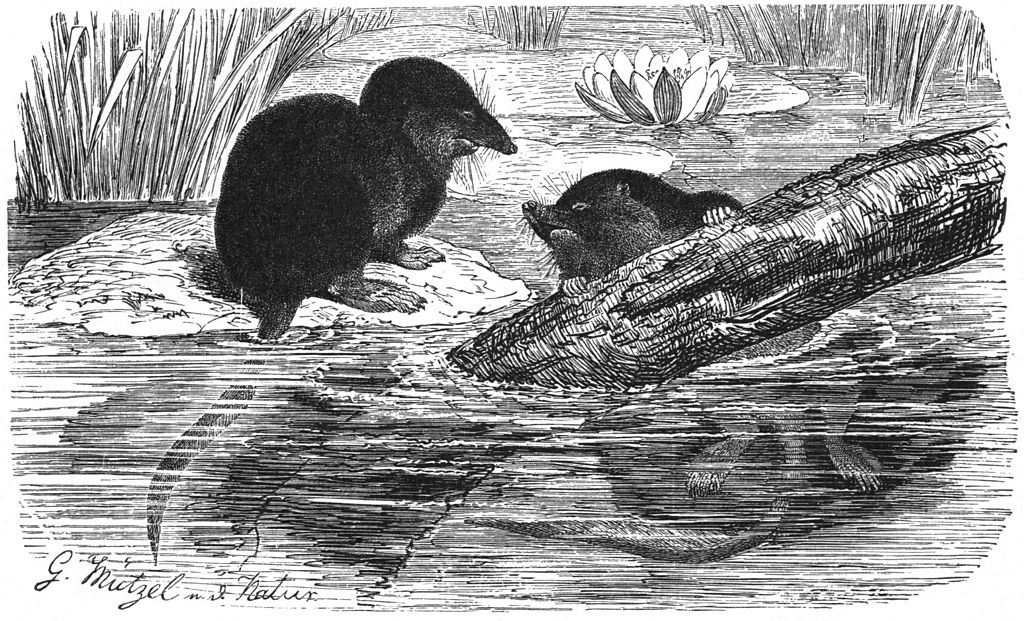 The water shrew is usually associated with aquatic habitats, including rivers, streams, marshes, fens, reed beds, watercress beds and, occasionally, garden ponds (Greenwood et al., 2002). However, it is also found regularly — but infrequently — in non-riparian habitats, including hedgerows, especially those associated with ditches, regardless of whether the features are currently wet (Fiona Mathews, pers. obs.). Research on the specific habitat preferences of the species is limited. Greenwood et al. (2002) found that rivers with steep, high banks (45° incline, 1.5m banks) have a higher chance of occupancy, although these characteristics are not essential. A complex relationship was identified between occurrence and vegetation cover: water shrews are found only at sites with trees, and have a higher occurrence where tree cover is sparse. The decrease in occurrence with dense tree cover is thought to be because of the correlated decrease in ground vegetation. High water quality is thought to be an important determinant of occurrence, through both the direct ingestion of pollutants via grooming, and the reduction of prey diversity and abundance. It is currently unclear whether water shrews have been negatively affected by organochlorine pesticides in water. Further testing is required to confirm all habitat associations, which were identified in a single study in the south east of England (Greenwood et al., 2002), and may not represent habitat requirement throughout Britain. Loss of connectivity between habitat patches is likely to have occurred as a consequence of physical features such as dams, weirs, and embankments, as well as human activities such as land draining and the deepening, straightening and widening of channels.

Gaps in the species’ distribution in England and Wales are likely to represent areas lacking survey effort, rather than true absences. It is unclear whether larger gaps in Scotland are true gaps in the distribution or reflect a lack of survey effort.

No papers with pre-breeding population density estimates or trends were identified by the literature search. The density estimate for unimproved grassland was derived from expert opinion (0.5ha-1; 95%CI = 0-1ha-1). One reference to occupancy for waterways was identified, derived from a national survey carried out in 2004-2005 (Carter and Churchfield, 2006). Surveys took place at 2159 sites across Britain, with signs of water shrews found at 17.4% of sites. As the population size estimate is not habitat-based, occupancy values could not be applied.

The images on this page may be reused. However, the name of the relevant author must be  attributed along with any accompanying license.