Mammal status UK part 19 Wild Boar The text on this page is courtesy of Naturlal England.

The wild boar incorporates a variety of habitats into its home range, but is mainly associated with woodlands (Spitz and Janeau, 1990; Gerard et al., 1991). The species can cause damage to agricultural crops, particularly where agricultural land borders woodland, although they also make use of linear features such as hedgerows, stone walls and ditches for shelter while moving through the landscape (Thurfjell et al., 2009).

A distribution map is presented in Figure 9.1a. In addition to the areas presented, two established populations are known to exist in Dumfries and Galloway (Campbell and Hartley, 2010). The distribution map does not show the location of feral pigs.

Three papers were returned from the literature search. One paper contained pre-breeding density estimates, one contained a number for road kill only, and one contained a total count without a defined area

The population size calculation is based on median densities in woodland habitats only, because data were lacking for other locations. In itself, this is unlikely to have introduced a serious error, as woodland is a core habitat for current populations, but 100% occupancy was assumed in all woodlands across the range, which will have overestimated population size. In addition, the density values, while derived from 48 individual estimates across two studies, came from known strongholds in the Forest of Dean (Gill, 2014) and in Dorset (Wilson, 2003). It is highly likely that densities elsewhere in southern England and in Scotland are lower, again suggesting an overestimate of population size. However, wild boar may be present in additional locations that are not recorded, and this error would act in the opposite direction. The population size for Scotland, in particular, should therefore be viewed with caution, and further surveys to clarify the status of wild boar are advised.

Although wild boar make use of a variety of habitats within their home range, they are primarily associated with woodlands. The population size estimate based on woodlands only is likely to represent the total population. Records of culled animals were included in the data used to estimate the current population size (Wilson, 2003), suggesting a source of overestimation. 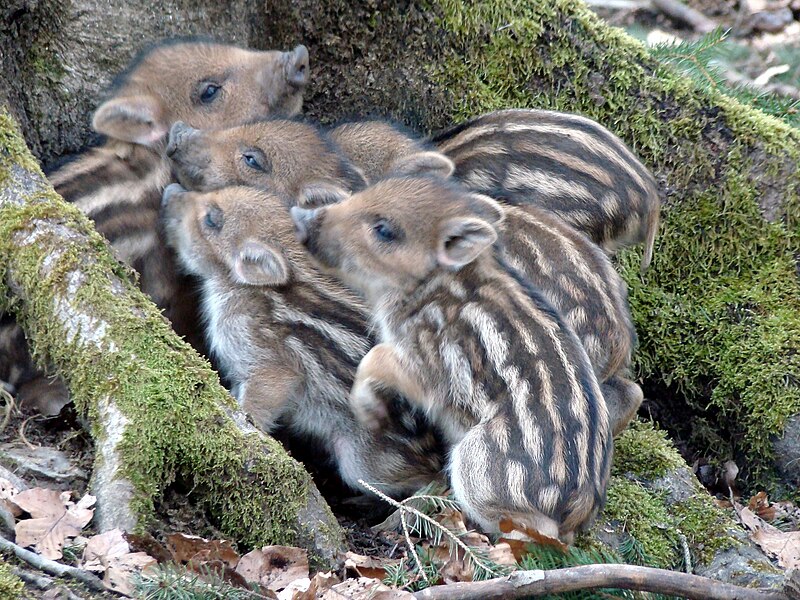 Only sporadic records of wild boar, derived from escapes and releases, were present in Britain in 1995, so the population was not reviewed by Harris et al. (1995).

Although the wild boar became extinct in Britain in the 13th century, captive animals have been kept in wildlife collections, zoos and farms since the 1980s. Over the last 10 to 15 years, small populations have become established as a result of escapes and deliberate releases. In 1998, there were two populations in Kent and Dorset, consisting of approximately 100 and 12-20 animals, respectively (Goulding et al., 1998; Wilson, 1999). By 2003, the population in Dorset was reported to be well-established and breeding, but culling pressure meant that range expansion was slow and population size had remained small (Wilson, 2003). In the Forest of Dean, a large population has become established as a result-

of accidental releases from a wild boar farm in the 1990s and an illegal release of around 60 farm-reared boar in 2004 (Dutton et al., 2015). The population has increased significantly since then, with an estimate of just under 1,000 in 2008 for the whole of the UK (DEFRA, 2008), to 1562 (95%CI = 1095-2296) in the Forest of Dean alone in 2016 (Gill and Waeber, 2016). This most recent estimate in the Forest of Dean included non-mature individuals, and approximately a quarter of the population were piglets: it is therefore likely that the total number of mature individuals is closer to 1,000. This increase does, however, suggest that our figure of 500 wild boar in England is a significant underestimate.

Recent sightings in the western Highlands in Scotland, the first of which was reported in 2007, suggest that a small population (estimated at 60 individuals) may have become established in Lochaber (Tony Mitchell-Jones, pers. comm.). In addition, two populations are known to have become established in Dumfries and Galloway (Campbell and Hartley, 2010), although further details are not known. The population in Scotland is therefore likely to be higher than estimated in this review.