The badger is one of the most commonly-studied British mammals because of its role in the epidemiology of bovine tuberculosis. It is difficult to infer social group size from the size of main and subsidiary setts or from the number of sett entrances. So, with a few exceptions such as the long-term studies at Wytham Woods in Oxford and Woodchester Park in Gloucestershire, most research has focused on the locations of setts. Badgers in Great Britain are highly social and prey primarily on earthworms. Sites conducive to sett construction (e.g., with sandy soils and gently rolling topography (Macdonald et al., 2004c) where cover is available from broadleaved woodland, scrub or nearby hedgerows (Wilson et al., 1997; Newton-Cross et al., 2007), and where earthworms are readily accessible (e.g., pasture (Newton-Cross et al., 2007)), are therefore preferred. Conversely, sett densities are low in upland and montane regions with heather moorland and acid soils. Nevertheless, lowland heath is used, especially if it is adjacent to favourable foraging habitats such as improved grassland. A recent analysis of a large-scale survey of 1614 1km grid squares in England confirmed that sett densities were highest in pastoral landscapes of south west England and south Wales, and in mixed arable agricultural areas of southern England (Judge et al., 2014). However, while such land-class-based approaches are useful at a national level, at a local scale there is considerable variability in sett density, depending on a combination of environmental factors (Macdonald et al., 1996).

Badgers have also made increasing use of urban areas over the last 25 years. In 1984, a survey of 378 English Local Authorities found that very few reported having urban badgers, and those reports were based on small populations largely confined to the urban-rural interface (Harris, 1984). By 2009, approximately 20% of Natural England licence applications relating to badgers came from urban areas (Delahay et al., 2009). Setts tend to be located in gardens rather than amenity grassland (Huck et al., 2008). Many urban badgers are now deliberately provisioned with food by householders, and they also exploit food waste and forage for natural prey such as earthworms in amenity grassland and gardens. The highest sett densities occur at an intermediate level of human population density (Wright et al., 2000; Schley et al., 2004), balancing the anthropogenic food availability against the probability of disturbance (Huck et al., 2008)

A combination of study types was used, including estimates of individual badger density, sett density and group size. Estimates of sett density were multiplied by the mean value of group size to derive animal densities (although it is recognised that, at the local scales, there is high variability in group size between setts). The mean group size across studies was 4.14. Several of the major studies on badger abundance reported sett densities by landscape character (e.g., ‘pastoral habitat’ in ‘Hunt Countries’). Conversions were therefore made to the nearest broad habitat type. In the case of the paper by Judge et al. (2014), which used land classes, ‘marginal upland 6’ was taken to equate to ‘unimproved grassland’, and all ‘pastoral’ categories were taken to represent ‘improved grassland’.

Because of the way in which predominantly grassland habitats were described in the original research papers, encompassing broad areas which potentially included woodlands, it was unclear whether broadleaved woodland should be included as a separate category, or whether this was already accounted for in the grassland estimates. Therefore, data are presented for both scenarios. The only density data for broadleaved woodland were derived from a population generally considered to be one of unusually high density (Wytham Woods, Oxford (Macdonald and Newman, 2002)). For this habitat only, expert opinion was used in addition to the published literature. Population sizes were then calculated using the general methods outlined at the start of the report.

Judge et al. (2017) did not present data for Scotland, but assuming a social group size of  4.14 four badgers (as suggested by this review) and multiplying this by the estimated of number of main setts (7,300-11,200 (Rainey et al., 2009)) gives a population estimate of 30,000-45,000. This is substantially lower than either figure provided in the current review.  It is unclear which estimate is more reliable, but it is reasonable to assume that the method used in this review overestimated the Scottish population because lower densities of badgers than the national median would be expected at high altitudes and on acid soils. 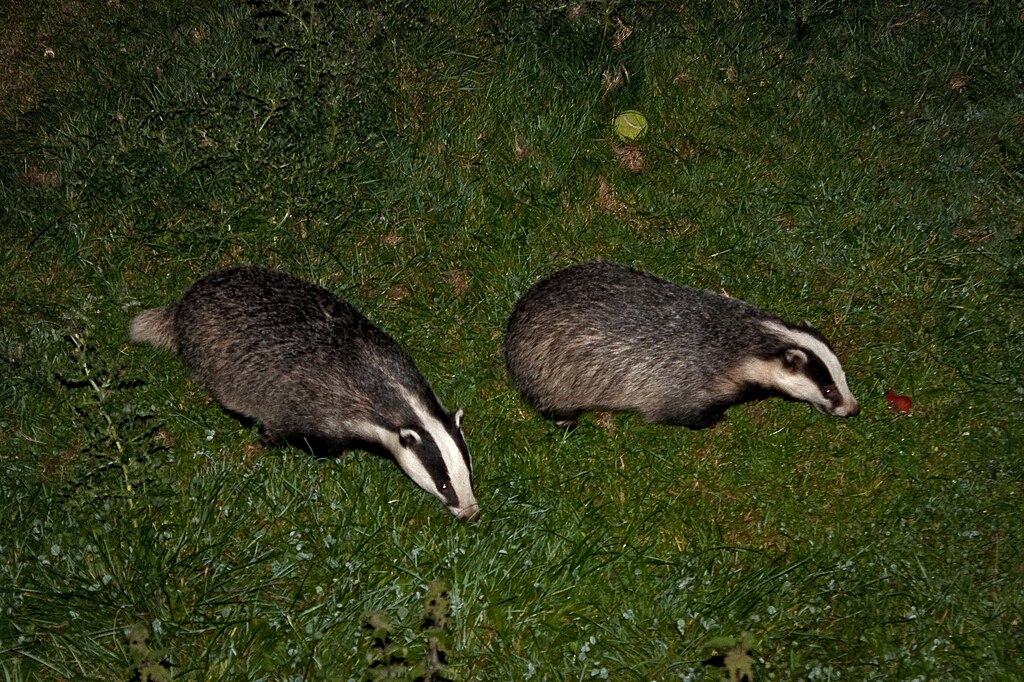 Nationally, there are changes between the two reviews in the estimated availability of key habitats (arable land, broadleaved woodland, improved grassland and urban), generated by a combination of true change and methodological differences, irrespective of any range change (see Sections 2.3 and 32.3 for further details).  Adjusting the results to reflect more probable temporal changes in the composition of the British landscape — using differences between the 1990 and 2007 Countryside Surveys (Carey et al., 2008) — generates a lower estimate that falls just outside the current confidence limits (401,000; 95% CI = 324,000478,000), implying a smaller, but nevertheless very substantial, population increase (160%)

Nationally, there are changes between the two reviews in the estimated availability of key habitats (arable land, broadleaved woodland, improved grassland and urban), generated by a combination of true change and methodological differences, irrespective of any range change (see Sections 2.3 and 32.3 for further details).  Adjusting the results to reflect more probable temporal changes in the composition of the British landscape — using differences between the 1990 and 2007 Countryside Surveys (Carey et al., 2008) — generates a lower estimate that falls just outside the current confidence limits (401,000; 95% CI = 324,000478,000), implying a smaller, but nevertheless very substantial, population increase (160%)

Three nationwide badger surveys were conducted between 1994 and 2013. These surveys suggest a 77% population increase between 1985 and 1997 (Wilson et al., 1997), and a 103% increase in sett density from 1985 to 2010 (Wilson et al., 1997; Judge et al., 2013). Although they provide the best trend data available for badgers, these figures should be regarded with caution, as differences in methodology between surveys may have resulted in an increase in survey effort in the latter years (Battersby and Greenwood, 2004.

There is a page on this site about the badger/lifestyle/habits breeding etc. Click on the relevant content banner above. Scroll down to view.

Thank you  for visiting.