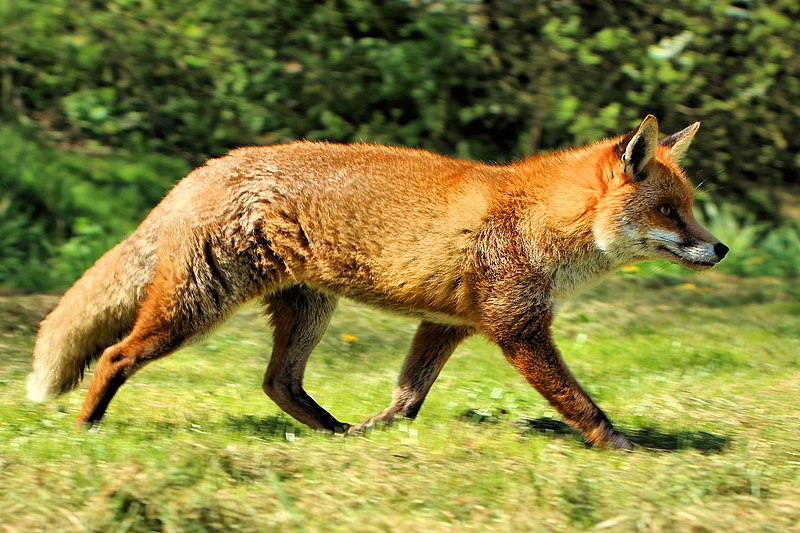 The red fox is highly adaptable and versatile. It is most abundant in habitats offering a wide variety of cover and food, but also occurs in montane areas, sand dunes and other open habitats. In urban areas, the species prefers low-density, residential suburbs (Harris and Rayner, 1986), and has territories with greater overlap which drift over time, probably because of the unpredictable nature of human-associated food resources (Doncaster and Macdonald, 1991). In rural areas, the fox often uses unoccupied badger setts as breeding sites (Parrott et al., 2012), and populations can be suppressed by badgers because of competitive exclusion (Macdonald et al., 2004a). Despite long-term attempts to control foxes by hunting, the uncoordinated nature of these interventions means that they appear to have only minor impacts on populations, even where efforts are intensive in the short term (Macdonald et al., 2003; Newsome et al., 2014). In both urban and rural areas, earthworms form a significant proportion of the diet (Doncaster et al., 1990), with the remainder of the diet being comprised of birds, small mammals, rabbits and scavenged items (Macdonald et al., 2015).

The first detailed studies of foxes in urban environments were conducted in the 1970s and 1980s in Oxford and Bristol, and since then the species appears to have colonised increasing numbers of British towns and cities, including Newcastle, Manchester, Brighton, Birmingham and Leeds (Scott et al., 2014). However, occupancy remains patchy, and more systematic surveys are required to assess the relative importance of urban and rural habitats.

The red fox is a generalist species that includes a range of different habitat types within its home range. Density estimates in the literature therefore often relate to ‘urban’ or ‘rural’ habitats generally, rather than to specific categories in the LCM2007. To maximise the number of estimates contributing information to this review, all density estimates were assigned to either ‘urban’ or ‘rural’ habitats, where rural habitats encompass all terrestrial habitats other than urban and gardens.

Thirteen papers were identified by the literature search. Five of these contained pre-breeding density estimates, and the remainder reported post-breeding estimates, measures of relative abundance, details of distribution changes, density estimates already included within other studies, or the effects of habitat variables on relative density. Percentage occupancy values were found in two papers, but the values were habitat-specific for just improved grasslands and dwarf shrub heath, and so could not be used in the current analysis.No percentage occupancy data were available; the population size is therefore overestimated. Rural areas form 94% of the species’ distribution, but despite this, the high density in urban environments means that similar numbers of foxes are found in urban and rural habitats. The density estimates are based on 9 estimates in urban environments, and 27 in rural environments. Sensitivity analysis was carried out by recalculating of population size with stepwise removal and replacement of each density estimate for urban areas. The resulting population sizes fell within the confidence limits of the original. Further systematic research to establish density and occupancy is needed in both urban and rural environments: reports of foxes are most likely in places where densities are high, and this may have led to a bias in the literature towards locations with unrepresentative populations.

Webbon et al. (2004) estimated the population of rural foxes to be 225,000, based on faecal count data from 1999-2000. This compares with the current estimate of 168,000 for foxes in rural areas. The current review incorporates the population density estimate from Webbon et al. (2004) (1km-2) into the median density estimate. Methodological differences between Webbon et al. (2004) and the current review are likely to explain the divergent population estimates: Webbon et al. (2004) derived density estimates for each British land class (Institute of Terrestrial Ecology), and then extrapolated the findings to all 1km squares within the range, whereas the current review distinguishes only rural and urban habitats. The main factor that limits fox density is the availability of food, with the highest densities found in rural lowland and urban areas, and much lower densities in the uplands, where food is more scarce (Chadwick et al., 1997). The population size reported here is therefore likely to be an overestimation because of the large areas of upland in Wales and Scotland that are unlikely to be represented accurately by a single median population density applied to all rural areas.

Harris et al. (1995) estimated that there were 240,000 foxes in Britain, comprising 195,000 in England, 23,000 in Scotland and 22,000 in Wales. These values were derived from separate estimates for ‘urban’ and ‘rural’ habitats. The urban estimate was based on a model predicting the density of social groups and a value of 3.4 adults per social group (derived from long-term monitoring of populations in Bristol). Extrapolation was limited to large urban areas (50,000+ residents). The rural estimate was based on social group density (0.04 and 1 social group per km2, depending on the land class) and 3 adults per social group (Kolb & Hewson (1980); Lloyd (1980)).

The current estimate is also based on population density estimates for urban and rural areas, although density estimates were made directly, rather than via model prediction, and rural areas were not divided into land classes.Relative trends in fox numbers are measured by the BTO as part of the Breeding Bird Survey (BBS), and by the Game and Wildlife Conservancy Trust through the National Gamebag Census (NGB). Between 1995 and 2009, no significant change in relative abundance had been detected by the NGB (-8%), whilst a small but significant increase was reported in the BBS (1%, 95%CI = 1%-21%) (Risely et al., 2010). However, the most recent BBS report indicates a decline of 34% in the numbers of foxes culled (95%CI = 48%-23%) between 1996 and 2014 (Harris et al., 2016). Survey effort is not quantified for the NGB survey, and it is not known whether the observed differences reflect changes in population size. The extent of any decline in the fox population is therefore unclear.

Population ,habitat and range all thought to be stable.

Red Fox, click on the relevant content banner above. Scroll down to view. Lifestyle, description,habits and breeding.