The red deer in Great Britain is most commonly associated with upland open moorland habitats, where it lives in sexually segregated herds. However, there is evidence that it prefers woodland habitats, particularly in other parts of its global range (Clutton-Brock and Albon, 1989): in Britain, there are small herds that live in woodland all year round, apparently benefiting from greater foraging resources. In summer, the open habitat populations feed primarily on graminoids (Latham et al., 1999), and prefer areas with grass or heather rides (Welch et al., 1990). In winter, these populations move to lower ground in search of grazing opportunities and shelter, switching to foraging primarily on heather (Latham et al., 1999). Although afforestation has resulted in a loss of some traditional overwintering habitat, the red deer has become established in plantations. It is managed by culling throughout its range, largely for sport and food, although recently in some areas also to reduce the impact of grazing on plant — and associated animal — biodiversity in woodlands (Trenkel et al., 1998). On some estates in Scotland, high numbers of red deer are promoted by winter feeding and reduced culling in order to increase numbers for sport hunting (Putman and Staines, 2004).

Native, although most populations, including all those in Wales, are relatively recent re-introductions.

The red deer has a patchy distribution throughout its range, and records in England and Wales are particularly scattered.
Although some deer surveys were habitat-specific (e.g., woodlands surveyed by faecal pellet counts (Latham et al., 1996; Mayle, 1996)), many were at landscape scale and included several habitat types (Trenkel et al., 1998; Daniels, 2006). For the latter, the density estimates were included in the assessment for suitable habitats found within the study areas. Suitable habitats were considered to be broadleaved and coniferous woodlands, dwarf shrub heath and montane. Expert opinion estimates were provided for improved grassland. However, it is assumed that any deer counted in improved grassland are transient and will be included within the estimates for the other suitable habitats.
Density estimates vary widely depending on region, and particularly between countries. Population size was calculated for woodlands, within specific regions of England and for Wales, using region-specific density data from Iossa et al. (2009). No data were available on the density of red deer in dwarf shrub and montane habitats for England or Wales, so data from Scottish studies were applied. For Scotland, density estimates were calculated by applying habitat-specific population density estimates. Data specific to England and Wales from Iossa et al. (2009) were excluded from the analysis for Scotland.
Ten papers were identified by the literature search. Five papers reported total counts, postbreeding density estimates, or mean year-round densities. One paper provided a density estimate for females only.
Populations of red deer have patchy distribution, particularly in England and Wales, but occupancy data with which to refine the estimates were not available. Therefore, population sizes are overestimated, most notably in England and Wales. The woodland density estimates for England and for Wales are based on a single source (Iossa et al., 2009). Whilst these are more realistic than using estimates from surveys in Scotland, and were drawn from 44 locations, the use of a single source nevertheless introduces considerable uncertainty to the estimates. Trends in deer population density vary widely in different parts of Scotland, from 1.9km-2 in the Cairngorms and east Loch Lomond to 15.1km-2 in Glenelg and Knoydart (Scottish Natural Heritage, 2016). Stratification by region may therefore be advisable for future assessments of population size.
Edwards and Kenyon (2013) reported an estimated population size in Scotland of 400,000 in 2011, based on annual reports from the Deer Commission for Scotland (DCS) (which merged with SNH in 2010) and its predecessor the Red Deer Commission. This estimate is above the upper confidence limit of the current estimate. A more recent estimate of 360,000400,000 has also been provided (Scottish Natural Heritage, 2016), with the lower end of this range falling just within the current confidence limit.
Most of the red deer population is found in dwarf shrub heath (32%) or coniferous woodland (28%), both of which constitute the majority of habitat in the species’ range (Figure 9.2b). The density estimates for these habitats are derived from, respectively, 32 (dwarf shrub heath) and 39 (coniferous woodlands) individual density estimate.

Harris et al. (1995) reported a total of 360,000 red deer, with 12,500 in England, 347,000 in Scotland and fewer than 50 in Wales. The overall figure for Great Britain is very similar to the current report, but the relative abundance across the three countries differs: Harris et al. suggested that there were fewer red deer in England and Wales, and more in Scotland. However, there are significant methodological differences between the two reports that complicate any inference of trends over time. For England, Harris et al. (1995) totalled the sizes of known herds or populations within each region, excluding areas known to consist of red-sika hybrids. This method may have underestimated the total population, as understudied areas or undocumented herds were not included. In contrast, the current report is likely to have overestimated the population, because it assumes 100% occupancy of all suitable habitat within the species’ distribution. For Wales, Harris el al. (1995) used records from the National Mammal Atlas. In Scotland, they used calculations by Clutton-Brock and Albon (1989) based on census data from the Red Deer Commission, but included a separate count for woodlands (Staines and Ratcliffe, 1987).
Over the last 15 years there has been considerable variability in the numbers of red deer culled in Scotland. The reported numbers culled peaked in 2004-2005, decreased substantially to its lowest level in 2011-2012, but by 2014-2015 had returned to 2004-2005 cull levels (over 68,000 per annum) (Scottish Natural Heritage, 2016). In contrast, the National Gamebag Census indicates that the numbers culled in England have increased by 27% between 1995 and 2014 (95%CI 32% decrease to 296% increase; Nicholas Aebischer, pers. comm.). However, this trend does not account for hunting effort, which may also vary over time.
The Deer Management Report (Scottish Natural Heritage, 2016) suggests opposing trends in abundance for different habitats in Scotland: there has been a decline in National Forest Estate woodlands of 12% between 2001 and 2016 compared with an increase (which has plateaued in recent years) in open ground. Over the longer term, population densities increased across Scotland between 1961 and 2000-2001, and have remained roughly stable since then (Scottish Natural Heritage, 2016). Geographical range size increased by 0.3% per year between 1972 and 2002 (Ward, 2005; Ward et al., 2008a), followed by a slower increase from 2007-2011 (Scottish Natural Heritage, 2016).
Range Increase* Habitat Stable  *Increase overall, but population and range have most likely stabilised in Scotland. 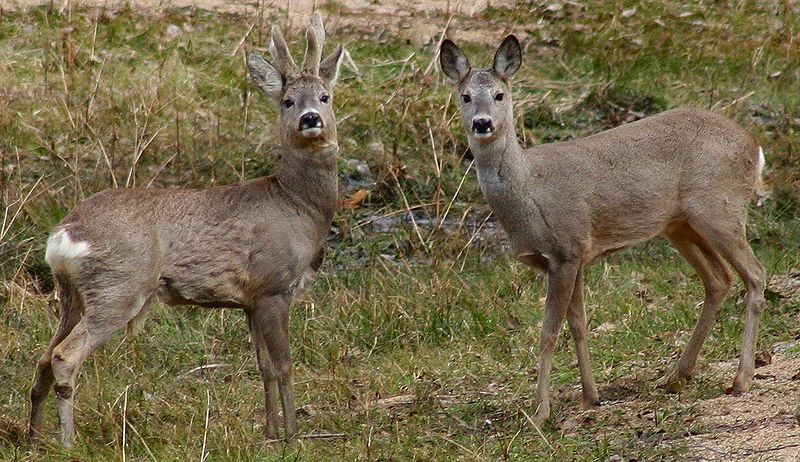 The roe deer is a typical browser, and feeds selectively on only the most digestible plant matter, such as leaves, flower-heads, seedlings and forbs (Latham et al., 1999). Forest habitats with richer food plant biomass such as young stands, forest rides and edges are favoured (Gill et al., 1996), but it will also utilise a wide mosaic of habitats to forage (Danilkin, 1996). It occurs at highest densities in mixed, coniferous or broadleaved woodland, and has benefited from the increase in woodland cover over the last century (see Harris and Yalden, 2008). The behaviour of the roe deer behaviour depends on the fragmentation of woodland habitats. Where woodland patches are numerous and widely distributed, populations are found within these patches; whereas when woodland is clumped and patches are distant, the species takes advantage of open areas instead, congregating in larger herds as distance from woodland increases (Hewison et al., 2001).

Twelve papers were identified by the literature search. One paper reported the likely geographical range rather than a specific estimate, three contained a total population size without a specified area, and two gave post-breeding density estimate. The same density values were applied to both coniferous and broadleaved woodlands, and these were the only habitat types included in the population estimates. Therefore, sensitivity analyses could not be performed.

The density estimates for woodland are based on large numbers of estimates, encompassing a range of woodland types (7 studies with 47 separate estimates). As a result, confidence intervals are relatively small. Study sites were located throughout England (Gill and Morgan, 2009; Iossa et al., 2009), in the east of England (Hemami et al., 2005; Waber and Dolman, 2015), and in North Yorkshire (Ward et al., 2004; Hemami et al., 2007). However, only a single estimate was available for Wales (Iossa et al., 2009), and none for Scotland. It is therefore likely that the population estimates for England are more robust than those for Wales or Scotland. This review assumes that population sizes can be estimated effectively on the basis of woodland habitats only, despite other habitats being used for foraging. It is possible that woodland patches surrounded by favourable resources (such as arable crops) may support higher roe deer densities than would the same size of patch in continuous woodland. If this is the case, then the computed population size will be an underestimate.

Percentage occupancy was based on surveys from 15 sites only, and may not, therefore, accurately represent occupancy throughout the species’ range.