Mammal status UK part 17  Stoat and Weasel. The Stoat Mustela ermines. The text on this page is courtesy of Natural England.

Preferred habitat of the stoat

The stoat is found in most habitats in Britain, and at any altitude, provided that sufficient cover and prey are available. Like other mustelids, there is territory defence against intruders of the same sex (Erlinge, 1977), and the smaller home ranges of females tend to be overlapped by one or more males (Powell, 1979). The species tends to avoid open spaces by travelling along hedgerows, ditches and stone walls. The stoat is a specialised predator of small and medium-sized mammals, and rabbits are a key prey item, particularly for males, forming more than 50% of their diet throughout the year (McDonald et al., 2000). Foraging is therefore concentrated on rabbit warrens, early successional communities favoured by field voles, and brush timber piles that might harbour small mammals (see Harris and Yalden, 2008). Populations appear to fluctuate in response to food supply. They showed marked declines (as measured by the National Gamebag Census) in the 1950s and 1960s, following myxomatosis epidemics (Sumption and Flowerdew, 1985).

Nationally, there are changes between the two reviews in the estimated availability of key habitats, generated by a combination of true change and methodological differences, irrespective of any range change (see Sections 2.3 and 32.3 for further details). The adjusting of results to reflect more probable temporal changes in the composition of the British landscape — using differences between the 1990 and 2007 Countryside Surveys (Carey et al., 2008) — produces a new population size estimate of 399,000, which is 9% smaller than the estimate shown in Table 8.6b. The significance of this reduction cannot be assessed because of the lack of confidence limits for either estimate. The original estimate is close to the value presented by Harris et al. (1995), whereas the adjusted estimate is 14% lower.

The National Gamebag Census suggests an increase of 28% (95% CI = 12%-42%) in the numbers of stoats culled between 1995 and 2009 (Aebischer et al., 2011), although it is unclear whether this increase is owing to an actual population size increase or an increase in trapping effort.

Although stoats are present in arable land, they are more likely to use field boundaries and hedgerows. Home ranges in the Swiss Jura mountains tend to be linear and follow boundary features (Debrot and Mermod, 1983). Density estimates from Harris et al. (1995) were based on the authors’ expert opinion, rather than empirical data, and it is unclear how this behaviour was taken into account for the density estimates for arable land. In this review, lengths of hedgerows were not included as a separate habitat category in order to avoid double counting 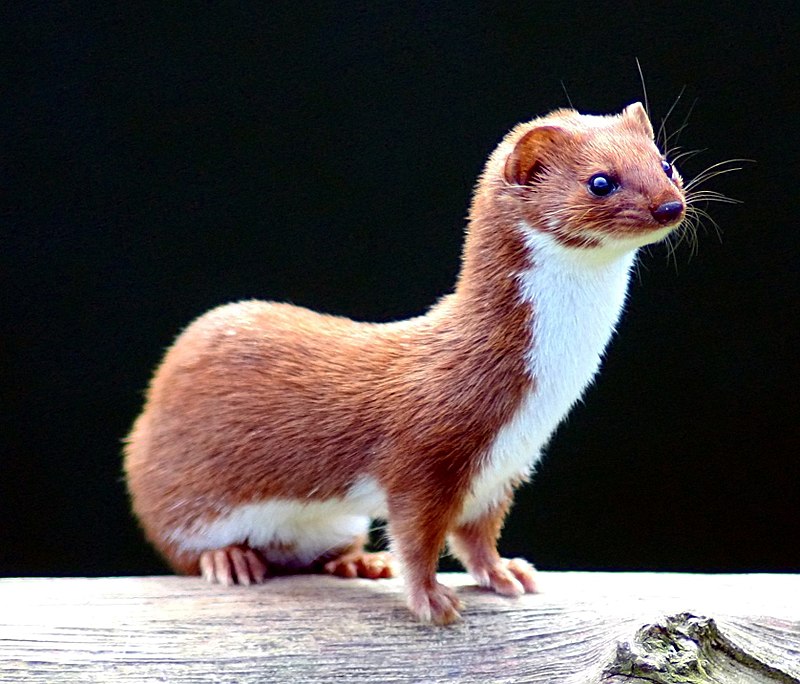 Preferred habitat of the weasel.

The weasel occupies a wide range of habitats. As with other mustelids, there is territory defence against intruders of the same sex, and the smaller home ranges of females tend to be overlapped by one or more males (Powell, 1979). Home range size, and hence density, is strongly dependent on food availability. The weasel is a specialised predator of voles and mice, but will also take young rabbits, birds, and birds’ eggs, particularly in spring when rodent populations are low (McDonald et al., 2000). Common in coniferous woodlands with dense field vole populations, the species is less abundant where small mammals are scarce, such as at high altitudes or in deciduous woodlands with sparse ground cover. On farmland, it is strongly associated with hedgerows, stone walls and other linear features, and rarely ventures into open habitat (see Harris and Yalden, 2008).

No papers were identified by the literature search that reported pre- or post-breeding population density estimates. Experts were also unable to provide any further information. Harris et al. (1995) calculated weasel population size based on the ratio of weasels to stoats, which was thought to be 1:1 overall despite the weasel population showing more regional variability. As no new information was available for this review, the estimates previously given by Harris et al. (1995) — a total British population of 450,000, comprised of 308,000 in England, 106,000 in Scotland and 36,000 in Wales — could not be updated, and therefore no reliability assessment was conducted. The original estimate provided by Harris et al. (1995) was scored as extremely unreliable.

There are pages on this site about the lifestyle habitat and breeding of these mammals. Click on the relevant content banner above and scroll down to view.