Magpie moths belong to the Order Lepidoptera and the Family Geometridae  and placed in the genus Abraxas. Abraxas is a genus of insects whose general characteristics are---

The antennae are simple, not fringed, the body is slender, palpi scarcely hirsute. The wings when at rest are extended horizontally, neither angulated or indented. The larvae or caterpillar have ten feet. One member, the Common  Magpie moth A.grossulariata is common in England and Wales but less so in Scotland. 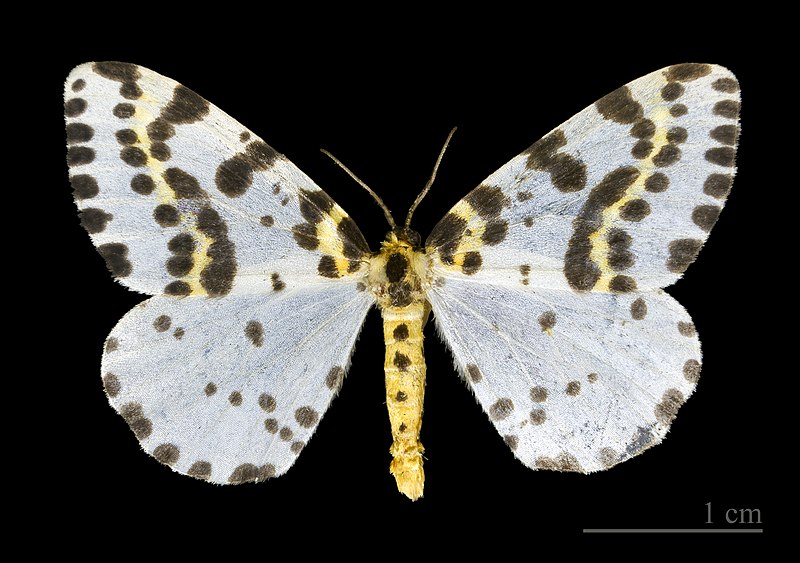 Description of the magpie moth

The wings are white, the upper or superior with the base streaked towards the hind margin with yellow or orange line, with  six rows of round black spots, more or less confluent. The lower or inferior wings have a few scattered spots in the middle, and a streak of the same beyond the middle and a row on the hind margin. The bosy is yellowish with rows of black spots.

They are at their best in July. Adults are on the wing from July to September. the wingspan is 42-48mm. they are a very variable species.

As previously mentioned the caterpillar has ten feet, they are white with a yellow line down the side and numerous rows of black irregular spots and dots. The chrysalis or pupa is suspended by a thread and is black with yellow bands. The larva is found from September until May. They over winter as a caterpillar and pupates in spring.

The caterpillar of the magpie moth does a great deal of harm to soft fruit trees such as currants and particularly gooseberry. here is an extract from the book The British Cyclopedia of Natural History by C.F.Partington 1835 {Courtesy of the BHL} ---" A.grossulariata is a very destructive pest of gooseberry plants in our gardens, and begins to consume the leaves and injuring the plants, almost as soon as the leaves appear.

"We should recommend for the destruction of them, that the plants be examined early in the morning, before the dew is off or before the sun has much power, , to seek for them and collect them, as they feed at this time, and may be easily detected. Poultry will feed on them avidly, as indeed they will on  most caterpillars"

They may be encountered on farmland, grassland, heathland, towns and gardens, upland and woodland.

Other species in the Genus Abraxas include the small magpie moth, which, as the name suggests are much smaller and belongs to the micro group of moths.