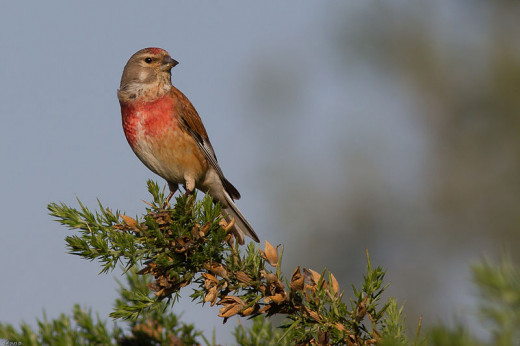 The Linnet often referred to as the common or brown linnet,Carduelis cannabinna is unfortunately placed on the Red list of conservation concern in the UK. The criteria for this placement is declines in population/distribution numbers of over 50% during the last forty years or so. In Ireland it is Amber listed {declines of between 25-50%} due to concern over the European breeding population declines. Europe it is of 2 concern. In the UK there is an estimated 410,000 territories During the summer.

The genus name of Carduelis meaning a Goldfinch was formerly Acanthis and the specific name cannabina meaning cannabis {hemp} alludes to its fondness for these seeds. They are birds of open country and farmland and feed on weed seeds. The Gaelic name is Gealan-lin, the Welsh llinos and the Irish Gleosiseach.

As always we will commence with a description of the bird under review. 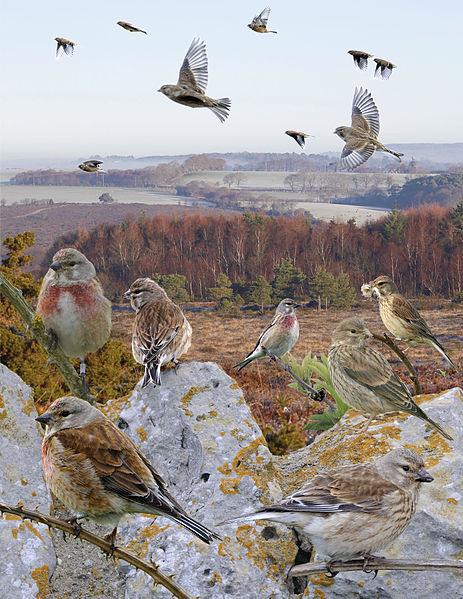 The plumage of the linnet is subject to great variation. The young linnet has an unpretentious plumage of greyish brown, each feather being tipped and edged with slightly darker brown. The primary wing feathers are darkish brown ,partly edged with white, and the tail feathers also dark brown, edged with white until the first moult. At this stage the young birds were referred to as the grey linnet in days gone by.

The female adult has a similar plumage.

The adult male, during the breeding season ,have bright red breasts which vary in degrees of intensity, some much brighter than others ,and it may vary down to a lemon colour .The reason for this is the occasional shedding of the brown tips of their feathers.

During the autumn and winter the male plumage is a richer brown and the white on the wings extends to the quill, which is not so in the female, whilst her back is a duller brown. The breast feathers of the male linnet are horizontally edged with brown, but those of the female are marked perpendicularly.

Regarding the plumage I came across these historical notes. " The birds always show many eccentricities in the way of abnormal plumage " Swaysland remarks " We have had several pied specimens in good song and took one from the Brighton downs {southern England}, of an elegant cream colour {this bird lived several years}. Another specimen came under our notice ,which was white with a lovely pink breast. The pink on the breast, however, faded in moulting , and the bird became white. A pair were taken in 1882 of a delicate cinnamon colour"

The male in breeding plumage has a glossy crimson patch from the base of the upper mandible to the center of the crown, the remainder of the head, nape and sides of the neck are brown.

The linnet is approximately 14 cm long {five and a half inches } and weighs between 15 and 20 grams. In relation to its body size the wings are medium length as is the tail, which is forked, the neck is short the bill short and the legs medium.. Similar species are the redpoll's and twite.

The flight is bounding or undulating . On the ground it hops

illustration of a pair of linnets. " Wherever bad farming prevails, the linnet will be found" says Swaysland {1838} " 'clean' land has few charms for him". This alludes to the fact that where weeds grow in abundance this little bird is happy to forage on the ground. in the days before weed killer was commonly employed on farmland this industrious bird helped the farmer immensely by eating seeds that would have otherwise have germinated to the detriment of the crop.

When one considers that this little forager will consume several thousand weed seeds in a week, some idea may be formed of the good it does in this respect. During the winter they will be found on stubble fields {where these still exist during that period and have not already been ploughed}, feeding upon the seeds of winter weeds. During the summer they feed on the seeds of weeds such as Chickweed, dandelion, Rape seeds and those of Flax {linum} it is through their fondness of the latter that the bird attained its English name of Linnet.

During the month of March linnet's arrive from across the sea to swell numbers of the resident birds that have over wintered. in the far northern parts of England and in Scotland it is often replaced by the Twite which is often referred to as the 'Mountain Linnet'. Burns in a despairing mood wrote --

" In vain to me the cowslips blow,

In vain to me the violets spring,

In vein to me in glen or show,

The mavis and the lintwhite sing"

One writer details " How sweet the song of the wild linnet in the early morning, while the gradually opening flowers are yet wet with dew, and the gossamer threads are among the grasses, and the open downs are bright with the butterfly-like flowers of the gorse. As we walkover the heaths , we listen for one moment to a solitary song, but hardly have we paused to listen more fully, than a whole chorus of linnets seems to have been awakened by the strain, and sing to us both long and loud in gentle concerts"

Birds of Britain. {Coward} , 1919 Public domain courtesy of the BHL. 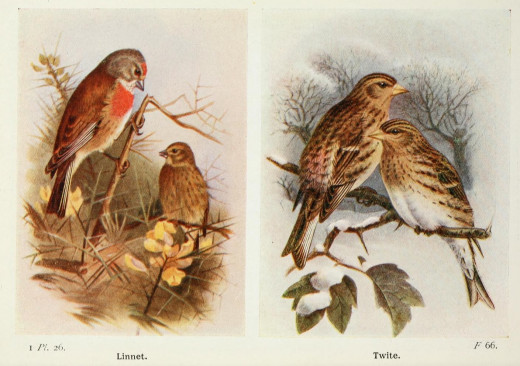 The Linnet up until recently modern times were regularly kept as a cage bird. The song of this bird was held in high esteem,being especially sweet and flute like which was delivered in a clear but jerky style, unlike the song of most other birds. In the wider countryside it would be delivered from a branch or sprig of gorse.

Linnets, it was said, are easily reared from the nest, and though timid soon become very tame. Howard Saunders observes that " it is the capacity for learning notes of other birds, which makes the linnet so great a favourite for the cage"

Butler 'British Birds With their Nest and Eggs' {1896-98} relates that " When hand reared the linnet becomes extremely tame, but if they are to be kept so, they must be caged separately, for association in an aviary with other birds, renders them as wild as caught specimens in a few days ,a fate which I proved first in 1886,and have since been able to confirm. It is also a mistake to trust rearing of caged nestlings to the parent birds. i tried this in 1887,hanging up the cage in a tree near the nest from which I removed the young. The old birds are willing enough to feed their young in this case, but the strongest nestlings fight their way to the front so that the weaker birds are unable to get sufficient food to sustain life and quickly die."

Butler continues, " in 1888, I successfully reared two nests of linnets {nine birds}, feeding them on egg food, and, as they grew stronger, on scalded German rape ; unfortunately the whole of them died after the first moult from inflammation of the bowels; since then I have been contented to return in my original plan and purchased linnets from bird catchers"

Many bird catchers were engaged in taking linnets an occupation that brought them a good living. Anne Pratt in her book 'Our Native Songsters ' relates " This is a sweet and gentle bird, of a very loving character, and perfectly distinguishing from all others the person who tends it. It will perch on the finger and caress it,and it even seems by it looks to express affection"

The Hon.Daines Barrington, who has recorded many experiments which was taken from the nest when only two or three old,which even learned to talk.! " it belonged" he said, " to Mr Mathews, an apothecary at Kensington {London},and from a want of other sounds to imitate, almost articulated the words 'pretty boy', as well as some other short phrases. I heard the bird myself repeat the words 'pretty boy', and Mr. Mathews assured me that he had neither the note nor call of any bird whatsoever"

Eggs of the Linnet. 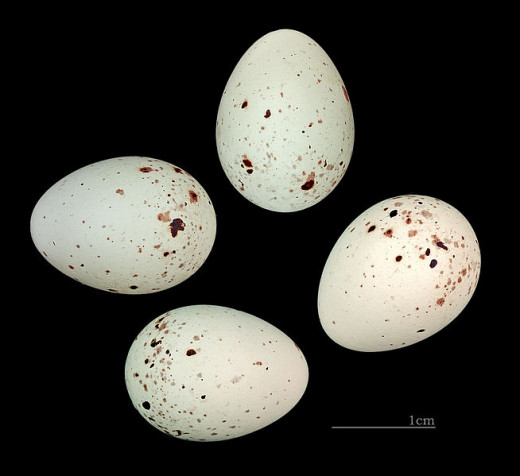 Nest and eggs of the Linnet

Hillsides adorned with Gorse {furze} is a favourite haunt for a nesting site. Where gorse is not available, a hedgerow or bushes and shrubs will often offer a location. Sometimes a pair will even come into a garden near a house to build their nest.

The structure is composed, primarily, of small twigs and stakes of grass and moss, intermixed with wool, horsehair and down

Four or five eggs make up the average clutch. They are very similar to those of the Goldfinch {European}, being a bluish white colour, spotted especially at the large end with purple and reddish brown but they vary in colour and sometimes almost pure white specimens have been encountered.

The eggs are incubated by the female for 13-14 days. During the incubation period the male invariably stands guard upon the top of a neighbouring spray. When danger occurs he immediately starts to sing to warn his mate of the danger. They then often fly off together to some place of safety and from there watch until the danger has passed.

The young hatchling's are fed by the parents and in a further 14 days or so, until they are strong enough to leave the nest. Linnets often raise two {rarely three} broods per season, especially if the nest is lost replacements may well be encountered late into the summer. Throughout the autumn and winter linnets may be observed in flocks, feeding on stubble fields, and waste ground the activity tends to more observable in situations near the coast. they search, for greater of their food upon the ground. When alarmed they often fly off together to the nearest tree tops, where they keep up a twittering chorus. Occasionally while feeding in flocks get more or less dispersed the flocks soon reunite again.

Linnets generally roost on the ground or the low bushes near to their feeding places. The flocks constantly wander from place to place. They usually keep to their own kind but often a few birds will intermingle with Greenfinches ,{ also referred to as the Green linnet}, Twite's, Redpolls or Chaffinches. The flight of the linnet is rapid but undulating.

The flock, which may be more accurately termed as small parties, will sometimes wheel and poise in the air,displaying great powers of wing,especially when disturbed from their feeding places. Upon the ground the bird hops with great ease and also displays remarkable dexterity when clinging to the stems of thistles and stalks of other weeds.

UK-Red List priority species due to declines in population/distribution over the last thirty years or so of over 50%.