Lily Family. A look At The Species and Basic Biology. 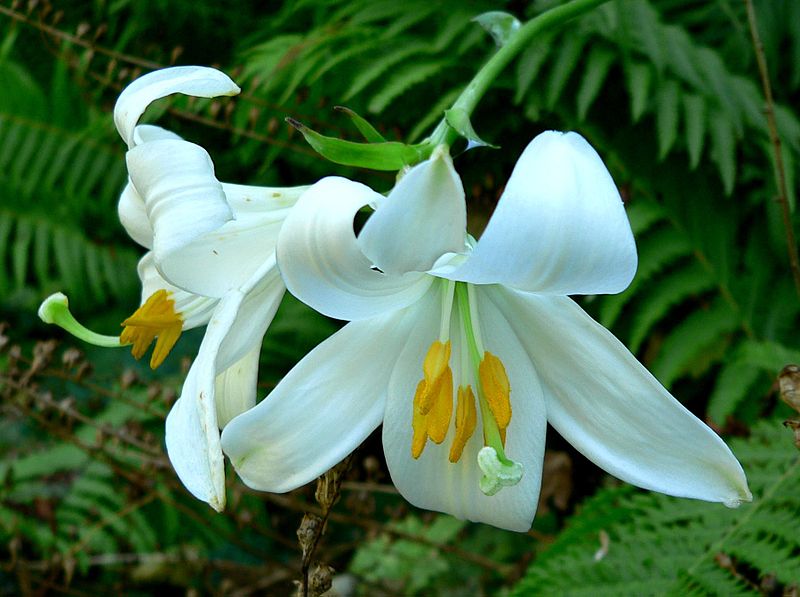 Along with the familiar and beautiful Lilies that adorn our gardens, other less handsome species belonged to this family such as the onion and garlic. It seems somewhat incongruous in mixing the fine lilies with the latter,however, they did belong to the same group but the onions and garlic  have since been moved to the Asparagales order of plants.

Lilium is the genus of true lilies which are herbaceous  flowering plants,growing from bulbs and the majority having large prominent flowers. Most species are native to the temperate northern hemisphere. Many other plants have Lily in their name,for example the Lily of the Valley,but they are not related to the true lilies the family Liliaceae is a family of about 15 genera and over 700 known species.

The true Lilies are perennial by nature and range in height from two to six feet.{ 60-180cm} They arise from underground bulbs {some species develop stolons}. Most bulbs are deeply buried,with a few species producing bulbs which are formed closer to the surface. Each year new stems are formed with adventitious roots {roots that grow in unusual places},above the bulb as it emerges  from the soil. These roots are in addition to the basal roots that develop at the base of the bulb.

The flowers which are produced are often large and they come in a range of colours with markings that are arranged in spots and blotches. The flowers have six Tepals { they are referred to as tepals when the sepals and petals are identical in appearance and cannot be told apart}. These give the flowers  of the species varying shapes and sizes. The tepals are not untied and bear a nectary at the base of each flower. The ovary is superior and borne above the point of attachment of the anthers. The fruit {seed capsule} is a three-celled pod . The seeds ripen in late summer.

The natural habitat of most of the lily species, as previously mentioned, is the cool temperate regions, most are deciduous and become dormant through the winter. However, there are species such as Lilium condium {image above} which occur in warmer climates and which may loose their leaves and remain dormant for a  relatively short period in summer and autumn and sprout from autumn to winter. these have short stems being a basal rosette of leaves until they have chilled enough,and the stems will elongate as the sun warms them during spring.

A Look at the species.

Lilium bulbiferum often referred to as the orange Lily or Tiger Lily is an herbaceous  European species producing underground bulbs. The species name of bulbiferum alludes to the secondary bulbs on the stems of the nominal species. These lilies attain the height of between eight and thirty six inches {20-90 cm },sometimes up to a maximum of forty seven inches. The bulbs are ovoid with pointed,whitish scales and can reach about 0.59 of an inch {1.5 cm} in diameter.  The stem is erect the leaves lanceolate up to four inches {10 cm } long.

The flowers four to five in an inflorescence produce no fragranc. The have six upright tepals, the outer are slighly larger than the inner ones. The flowers are four to six centimeters in length,one to one and a half inches. They are of a bright yellow-orange with reddish brown spots or dots. The stamens are erect and half as long as the tepals with red anthers. The style is orange 35mm in height. The flowering period extends from May until July.

It is a widely distributed species situated in much of Europe from Spain to Finland and Ukraine. Its habitat is the mountain meadows and on hillsides. They prefer calcareous soils in warm sunny places but they are also encountered on slightly acid soils up to about 1600-6200 feet above sea level.

The cultivars are a group of Lilium species of mainly summer-flowering bulbs,grown for their brightly coloured ,often fragrant flowers.  Each fleshy scaled bulb produces a single ,erect,unbranched leafy stem. The foliage is mainly lanced shaped or linear, they may be scattered along the stem or appear in whorls,sometimes with bulbills in their axils.

The flowers ,usually several per stem,are mainly trumpet or bowl shaped or the tepals are refexed to form a turkscap. Each plant has a spread of up to twelve inches {30 cm }. They are frost hardy unless otherwise stated on the label, and they require sun and any well drained soil,unless otherwise stated. They are propagated by seed in autumn or spring. Or by the bulbills or bulb scales in autumn.

There are a great diversity available to the gardener or grower and far to many to include here. Below are images of just a small sample.

A selection of cultivar images. Below Lilium 'cappuccino

Reuse of the images.

Associated pages.  Click on the relevant content banner at the top of this page and scroll down to view.

Flora via Links banner. Click on the links banner at the top of this page. Scroll down to relevant box, Click this is a direct link to the article with images. {including  the series Past and present medicinal uses}

All other flora that features on this site are grouped together in the content banners at the top of the page.