Lepidoptera is a very extensive and beautiful Order of four winged insects known by the English names of butterflies and moths, and distinguished by having the wings composed of double, transparent membrane clothed on the upper and under sides with minute coloured scales resembling dust or farina.

The yes are large and lateral, the antennae generally long and multi-articulate, and very variable in form. The mouth is composed, apparently of a long spirally coiled organ, which when at rest is coiled up within the mouth. this very long and delicate proboscis is employed by the insect in sipping nectar from flowers {sometimes rotting fruit} upon which alone it subsists, and which, by its peculiar construction is admirably adapted for penetrating the narrow blossoms.

The colour of the thorax is generally similar to that of the anterior wings in the majority of moths, as well as in the butterflies, in which it is clothed with "fur" hairs. The wings are attached to the lateral and superior part of the thorax and are always present, except in a few species of moths which the females are apterous, or have wings reduced to small and useless appendages.

The fine layers of membrane of which the wings are composed like the upper and lower surfaces of a leaf are kept expanded by a number of longitudanal veins or nerves. These nerves as in Dipteria {2 winged flies} and Hymenoptera {wasps, bees, ants and saw flies} according to their number and position, often very important characters for genera distribution.

The structure of the scales, which give these insects all their beauty. However, the slight manner by which they are attached to the wings causes them to scale off at the least touch.

In some species of Lepidoptera the wings are more or less vitreous and consequently denuded of scales, or have but a few of them. In many species the scales have metalic sheens, which indeed, in some exotic butterflies, are so bright that it is difficult to keep your gaze upon them.

Lepidoptera is the name given by Linnaeus in 1735 from Latin via Greek lepis meaning scale + pteron meaning wing. this vast order is thought to contain upwards of 175,000 species world wide. here in the UK we have several butterflies belonging to the Order there follows some examples. 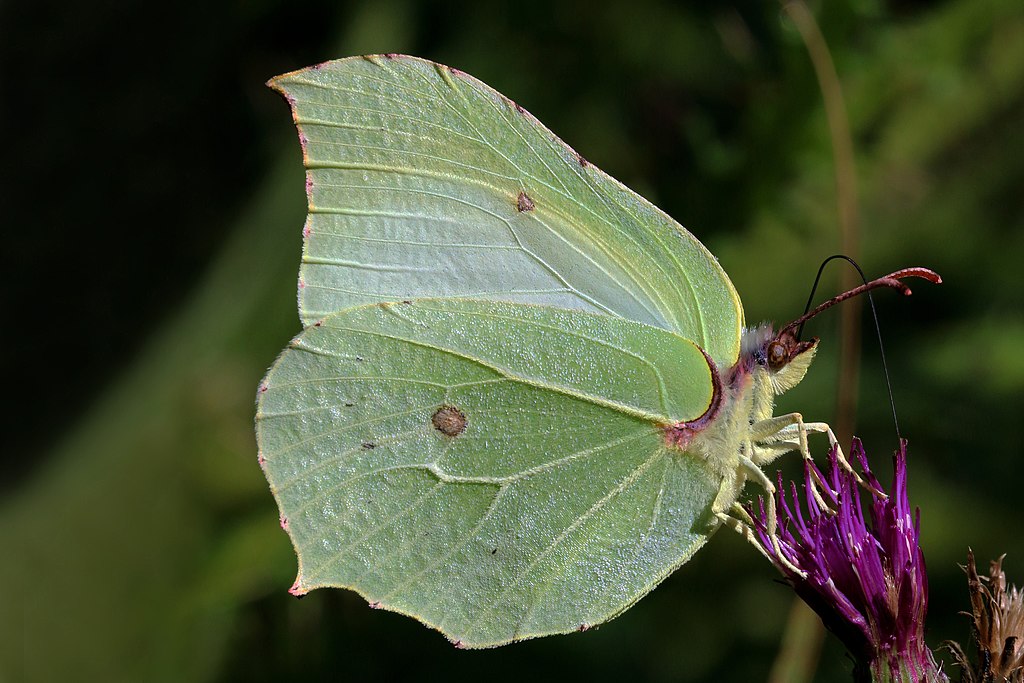 The common brimstone belongs to the Family Pieridae. This one species of butterfly that seems to be marching northwards in England, a spread that has been noticeable. Thus it has a low conservation rating. It is not currently under any threat in Europe.  It is protected in Northern Ireland.  It also occurs in the Republic of Ireland.

The Brown Argus belongs to the family Lycaenidae, whose close relative the Northern Brown Argus is featured in the Eden Valley/Species { click on the content banner on the right hand side of this page}.

The Brown Argus is found on southern chalk and limestone. It appears to favour the central and eastern parts of the England and the extreme south and extreme north of Wales. In the UK they have a low conservation concern. In Europe they are not threatened.

The comma butterfly belongs to the family Nymphalini and are widespread and expanding northwards. It is a medium sized butterfly that occurs in England, Scotland , Wales and Ireland.

It has a low priority species of conservation concern in the UK. In Europe it is not threatened.

The larval food plant is the common nettle, currants and some willow species.

The gate keeper-Photograph by Dal.

The gatekeeper is a medium sized butterfly of the Nymphalidae also known as the hedge brown.

Found in grassland where tall grasses grow near to hedges and scrub, also on heath and downland. Widespread and common in England , Wales and in the south and on the eastern side of the Republic of Ireland.

It is a low priority species of conservation concern. In Europe it is not threatened. In the UK it is expanding its range northwards.

The large skipper belongs to the family Hesperidae and is a small butterfly { almost moth like in appearance} id found in England, Scotland, and Wales. it frequents grassy areas where the food plants grow in sheltered, often damp, situations.

It is a species of low priority of conservation concern.  European status not threatened.

The Green Hairstreak belongs to the family Lycaenidae and is a small butterfly which holds its wings closed when not in flight. although widespread in England, Wales,Scotland and Ireland, they usually only occur in small colonies and local losses have occurred in many regions.

It is of medium level conservation concern. European status not threatened.

The large tortoise shell belongs to the family Nymphalidae. Unfortunately this butterfly is now thought to be extinct in Britain. it is larger and much duller than the small tortoise shell  {which is relatively common} and lacks the white spot on the corner of wings.

Conservation priority would be high should the species be rediscovered. European status not threatened.

Other prominent members of the Lepidoptera in Britain.

For more information about these species and many more click on the links banner on the right hand side of this page then scroll down to Butterfly Conservation. This is a direct link to the home page of that site.

Red Admirals have topped the Butterfly count for 2014 with the highest counts in four years recorded in gardens in the UK. The recordings were also on average three weeks earlier than last season. Despite being migratory these butterflies are being reported well into early w

inter,probably due to climate change,with large numbers being reported well into October.

One of the UK's most widespread butterflies the small copper has had its worst year on record and now is faced with a severe decline in numbers, a study has revealed. The summer of 2015 was unseasonably cool and habitat specialist butterflies suffered as a result. The Small copper numbers were down a quarter compared with 2014,surveys revealed. They were carried out by Butterfly Conservation and the Centre of Ecology and Hydrology.

Found across the UK the Small copper is an occasional garden visitor, has seen its numbers tumble. Previous surveys has also revealed a decline over the last century due to habitat loss, but relatively adverse weather conditions over the last few decades has aggravated the decline.

Information can also be found at www.butterfly-conservation.org/48-11471/small-cooper-slumps-as-butterflies-struggle-in-cold-summer.html

Information on other species and about the surveys can be found at the same address.