Have you ever seen, what appears to be a leaf floating through the air, on a still and warm spring day?. This leaf is not floating on the air of its own accord. Carrying this leaf will be a leaf cutter bee. look around at your plants in the vicinity, particularly the young foliage of rose bushes. It may be that you will observe  parts of the leaf have been neatly cut away, as though they have been cut with sharp scissors. They are usually cut away in a semi circular manner , and many leaves on a bush{s} may be affected.

If you are patient, and keep an eye on the affected bush{s} you may well be rewarded with a sighting of the culprit.-The Leaf cutter bee.

Foliage after a leaf cutter bee has visited

Leaf cutters bees are similar in size to the honey bee, but are adorned with longer, denser hairs, and the females may be distinguished from most other bees by having a dense pollen brush on the under side of the abdomen. These brushes can be more easily observed when the bee is seen from the side on.

Hence the foraging females collect the pollen by means of these brushes {most species of bee have specialized hairs on their legs to collect pollen}. The males are quite similar  to the females, however, they lack the pollen brush. 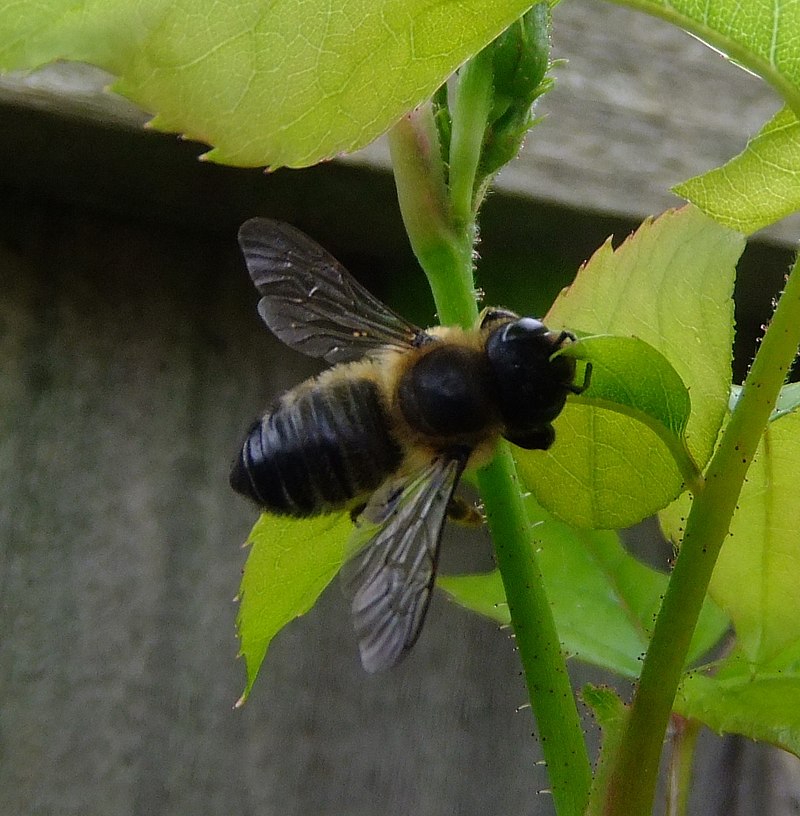 How do they cut and carry the leaf ?

When landing on a leaf, the leaf cutter straddles it so that the edge runs along her under side. Clutching it carefully with all six legs she starts to snip with her jaws, which are designed for just such a job. The operation is quite noisy and on a still summers day can be heard from some yards away.Although noisy the cutter bee operation is quickly performed taking no more than five to ten seconds {often much quicker ]. When the leaf section is hanging by the feeblest thread, she tends to wobble. It is at this point she brings her wings into action disengaging the feeble thread. Not far from the plant she will land and readjust her grip on the leaf segment.

Depending on the species she will dig or uses a ready made tunnel or cavity in which the leaf segment will be part of a kind of cocoon.  Once the task is completed, and, it consists of several segments, some cut length ways others rounded to seal the ends. These end seals are cut perfectly to suit their purpose. When bitten to create the right size they produce a gluey sap which aids the bee in her construction.

Once the capsule is completed to her satisfaction she will fly off to find pollen and nectar. A by product of this activity among the blooms, is that she helps to pollinate the flowers. Using the pollen and nectar she makes a nourishing paste with which she fills the cell, she has created with the leaf segments, to about two thirds full, then she lays an egg on it. She always makes sure the long walls protrude beyond the door, thereby forming a secure footing for the next cell she will make which joins on to it.

Each nest may contain between six and ten of these cells which can take up to 14 days to complete these days will be a very busy time for the bee. Once the larvae hatch they will munch their way through the paste mix , a task that will take them about three weeks.Once fully fed the larvae will then spin a cocoon and pupate. It will spend the long winter months in the tunnel/cavity, before emerging as an adult.

The sole purpose of the male bee is to mate with as many females as possible, so , they are always patrolling flower beds in search of females.

All British leaf cutter bees belong to the genus Megachile. There are seven species in all but only two, the Garden leaf cutter Megachile centuncularis are widespread and common. The nest of this species may be found in wood or in the cavities of old walls. This species may also be encountered in the compost of flower pots, especially those in greenhouses.

Magachile willughbiella, is also common and widespread and they tend to have a fondness for bell-flowers. It is also another species that will exploit pots of compost in the greenhouse., they also burrow in  wood and soil.

Megachile leachella has a much more local distribution and tends to frequent coastal localities.

Megachile ligniseca is uncommon but relatively widespread and tends to burrow in the wood of dead trees or similar wooden structures.

Megachile maritima is another coastal species found as far north as my home county of Lancashire.

Megachile versicolor relatively common as far north as the borders. Also burrows in tree trunks and other wooden structures.