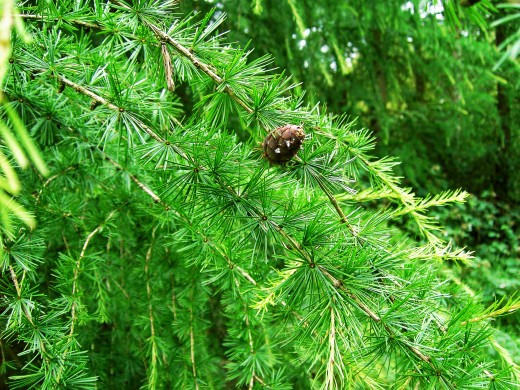 To my mind the European Larch Larix decidua is one of the loveliest coniferous trees.. It is also unusual among conifer trees it is the only species that has apple green needles{leaves} in spring that turn golden yellow in the autumn before they fall from the tree in the manner of their deciduous cousins.

The European larch is native to the mountain regions of central Europe but they do occur in the lowlands of north Poland. The wood is tough and durable and employed in the yacht building industry.

Although it may be an impressive species the tree is short lived having only a 30-40 year lifespan. The trunk of this handsome tree is straight and upright that has a relatively broad base. It may attain the height of 40m. The bark varies somewhat in colour from pale brown to grey. The tree produces swaying pendulous branches and twigs, the latter being knotted and of a yellowish colour. The branches radiate from the trunk in an horizontal manner and are arranged in irregular whorls.

The needles are 12-30mm {approx-2cm-3cm} long. They are a pale apple green in spring and are borne in tufts of about 20-40 needles. The needles are flattened and pointed however, they are very soft to the touch. The needles turn yellow in autumn and fall from the tree, hence the species name of decidua.

The female flowers are reddish cones which eventually become brown when mature, and very woody. They persist on the tree well after the seeds have been shed. The seeds are beorn in the female cones which are 18-32mm long{just over 3cm} having between 40 and 50 seeds. The male cones are comprised of softer material and there one function is to produce the pollen that the female cones are receptive too.

The larch is naturalised in northern and western Britain. The ttree is tolerant of many soil types, thus may be found in a variety of habitat ranging from the chalk downland, moorland slopes and areas of sand and gravel. They have been extensively planted for timber.

Bad news for the Larch.

In my article the Mighty Oaks of England, I reviewed as disease known as the "sudden oak death". This disease has now spread to the Larch tree. In the Quantock hills in the south of England 10,000 trees have been felled in an attempt to halt the disease, 50,000 others in a plantation nearby are also in line for being felled. In the south west of England an area of 2,000 hectares are effected and the disease is gradually making progress in a northerly direction.

The trees that are felled are of no use as timber and they are destined to become fuel for power stations. It has been tagged by Forestry workers as the " Foot and Mouth" of the larch.

The Japanese Larch-Larix kaempferi is also widely planted in the U.K. and is just as popular if not more so than its European counterpart, being a species that thrives on poor soils. The tree native to the slopes of mount Fuji is one of the few trees that are now more common abroad than it is in Japan 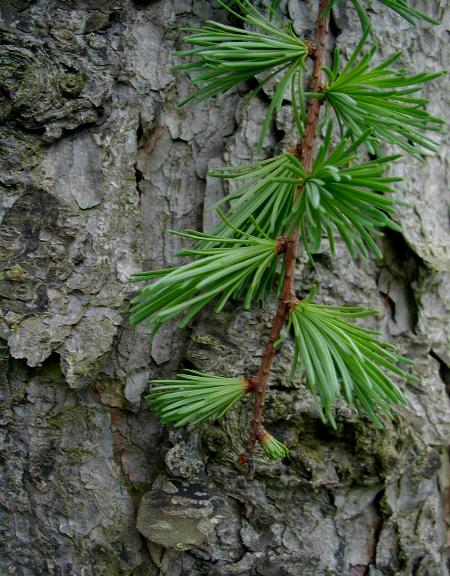 The Japanese Larch is also much more resistant to fungal attacks than its European counterpart. Although they are superficially similar in habit and growth they can be distinguished by having a blue hue on the green needles. They also have light white bands on the under surface. 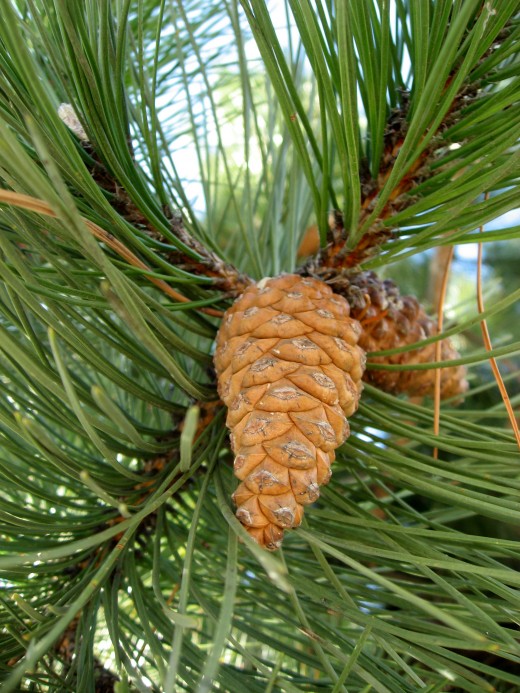 Coniferous trees in general tend to grow best on poor acidic or waterlogged soils making them an ideal species in the west of Britain renowned for its damp climate, especially so in the north. Many are species to mountainous regions of the world and are quite capable of withstanding any weather winter throws our way. Because of their rapid growth they are favoured by Landscape gardeners for ornamental planting, for creating wind shields or for their majestic beauty.

Here in the U.K. we have only three native species of coniferous trees the yew tree, the prolific Scots pine and the juniper. However, many species such as the larch and Norway spruce have been grown here since the 17th century along with many others that have been introduced to our shores.

The Corsican Pine, Pina nigra is one of the commonest pines used in forestry having straight trunks and narrow rounded crowns. The bark is fissured and often appears dark grey with scale like plates. it can be distinguished from other species of pine by the needles which are much longer {8-16cm} and tend to twist.

The female cones are 6-8cm long, egg shaped and woody when mature.

The trees are native to Corsica and are well adapted to grow on the dry sandy soils of East Anglia and the more southern heath-lands.

The Norway spruce Pinus abies is a tall columnar tree with branches in regular whorls which tend to hang downwards as the tree matures. The bark is smooth and of a rusty brown colouring in young trees later splitting into purple brown plates.

It is a prominent timber tree and the young saplings are familiar to us all as Christmas trees. It was once native to Britain but met its demise here during the last ice age. It was then reintroduced about 400 years ago. It grows to the height of up to 50M.

The female cones are hanging and elongated from 10-18cm long, cylindrical and often slightly curved. They are greenish when young becoming the familiar pale brown colour when mature, they fall intact from the tree. The species grows on a variety of soils.

In the next article in this series the native juniper comes under review along with the douglas fir and cedar of Lebanon.

Components of the Norway spruce. 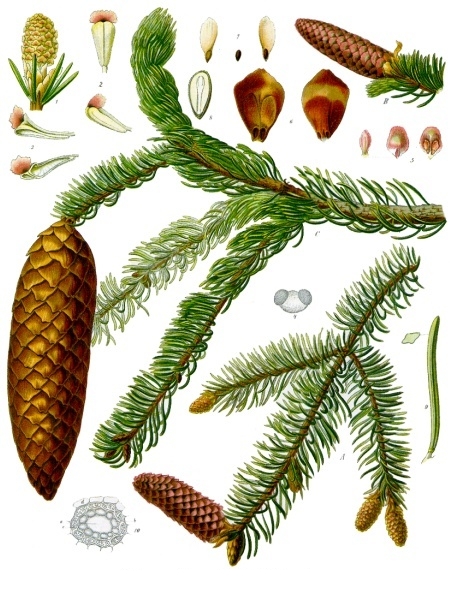 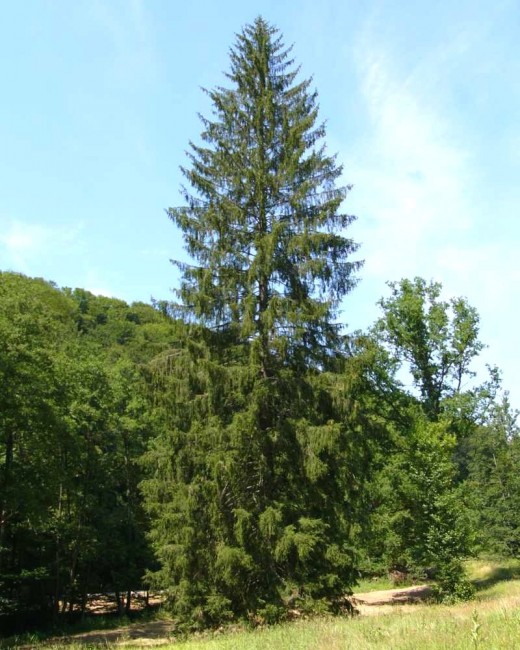 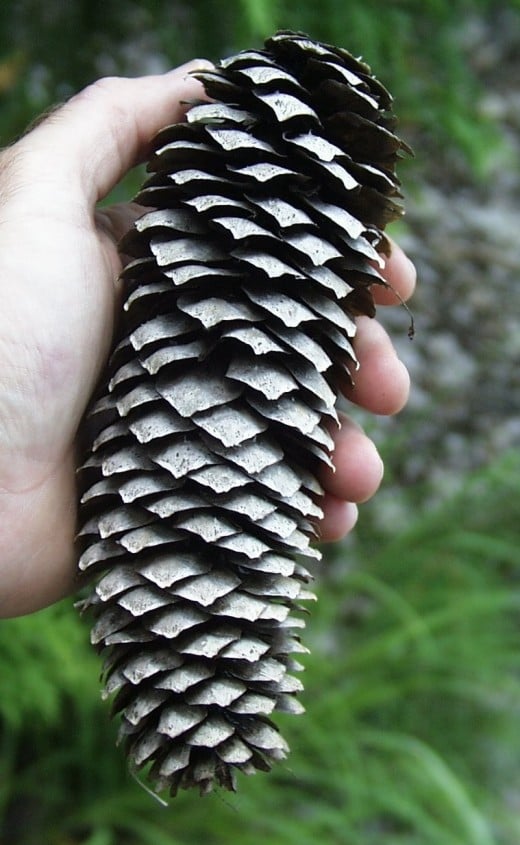 Cone of the Norway spruce.