Whitebeams belong to the Roseace family and are related to the Rowan tree.  {see content banners}

There are various species and sub species many with a restricted range. Probably the most familiar of these species is Sorbus aria the common whitebeam. The tree takes its name from  the white colour of the underside of the leaves, contrasting with the dull green colour of the upper surface. "beam" derives from the Anglo-Saxon  name for a tree. The wood is hard and often utilised in the art of wood turning and furniture making, also for tool handles. Because of the woods hardiness and durability it was employed  to make cogs before iron became the popular material for such items. 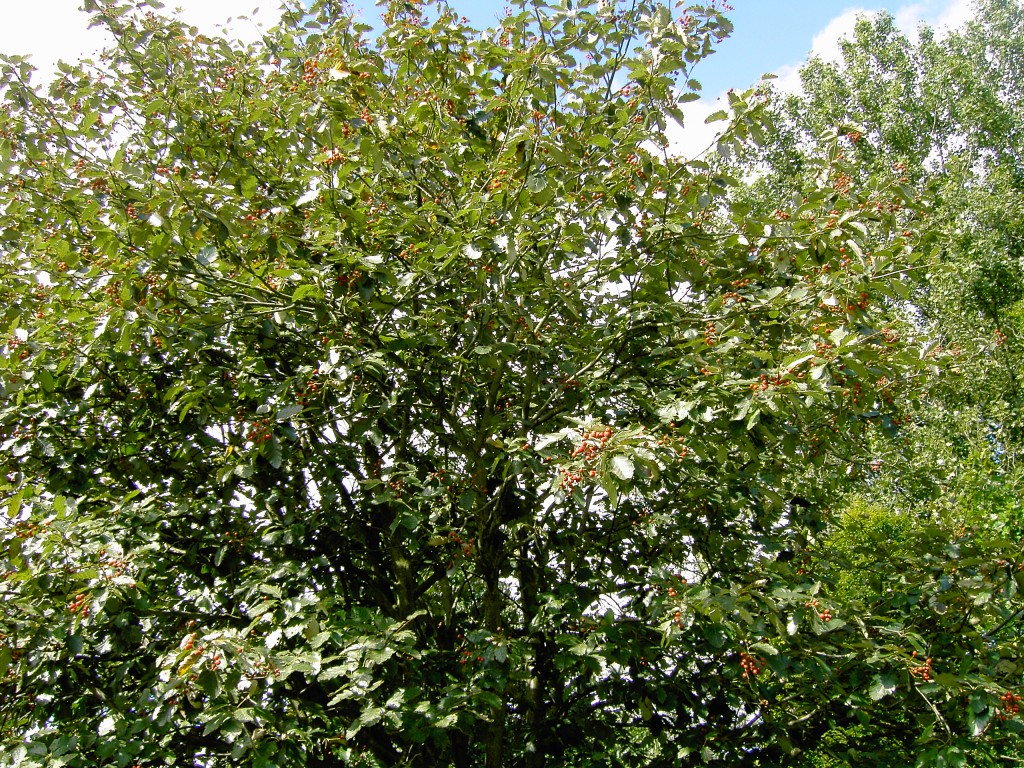 The whole tree has a whole has a rounded canopy outline, more conical when young. The shoots are covered with white hairs at first but soon become smoother with age. The foliage is arranged alternately and are of an oval shape and toothed they are 1-2 cm long and are short stalked. During late spring and early summer the tree produces white flowers up to 1.5 cm wide. They are formed in clusters and each flower has five petals. 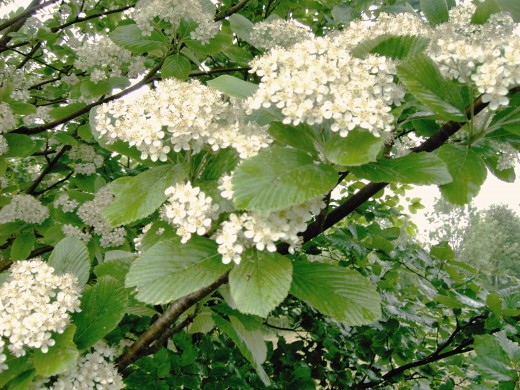 The flowers are succeeded by relatively large berries green at first becoming red when ripe. the trees have been widely planted in parks and gardens especially in the north of England. There are about 14 species of whitebeam in the U.K. many of them endemic. Here in Lancashire we have one such rare species the Lancaster whitebeam, Sorbus lancastrienis. This species of white beam only grows in the restricted limestone areas around Morecambe Bay,itself an important habitat for wildfowl.

These species of whitebeam can only be differentiated from the others by subtle differences in growth pattern of the tree and by the form and structure of the foliage, these would be lost on the layman. However, they have been distinguished as separate species and recognised as such by the experts. 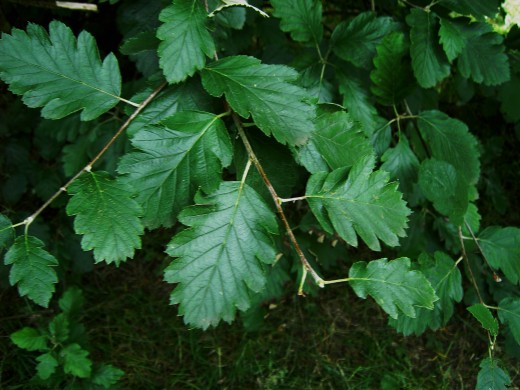 The berries are green at first 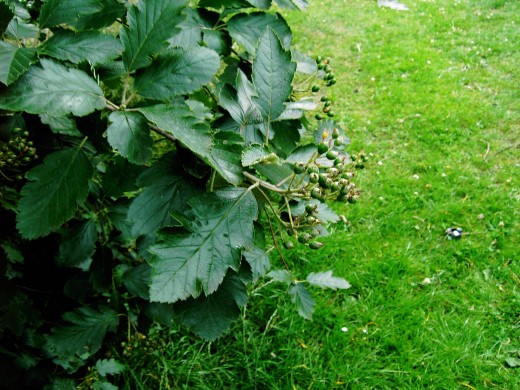 Lancaster whitebeam sports foliage that is relatively broad. A  feature of this tree's foliage is that they are only lobed and toothed for the top two thirds of the blade. On the under surface of the leaf there is a covering of woolly hairs giving the surface a silvery white appearance, they do occur on the upper surface , but here, they are not so numerous and almost insignificant. The upper surface is of a grey green colour.In common with all species of whitebeam they produce white flowers in late spring and early summer which are succeeded by red berries in Autumn

Ripening berries of the Whitebeam 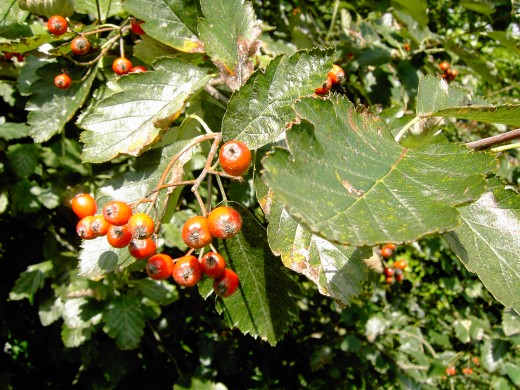 Birds are happy when they are about the berries and it is thought that this is the main dispersal method of all whitebeams as the seeds are deposited far away from the parent tree via  their droppings.  However, the Lancaster whitebeam will only get established if deposited in their favoured habitat on limestone cliffs, limestone screes, limestone pavements, and open limestone woodland.

The Lancaster whitebeam is a British Red Data Species. There it is given the status of "low risk-near threatened" According to the Lancashire Biodiversity -Species Action Plan  {S.A.P.} Lancashire holds the only native population of this species in Britain thus it is of national , if not international importance. Around the region of Morecambe Bay it has been estimated there is a population of 2,000 trees in total. many of the trees occur in the Arnside-Silverdale Area of Outstanding Natural Beauty, especially along the coastal cliffs.

The species is not thought to be under significant threat, so why is an Action Plan required? .I list here some of the main concerns of conservationists according to the Lancashire S.A.P..

Where the plant occurs in woodland it prefers open situations, thus is vulnerable to being shaded out by taller more robust trees. In an attempt to stop this possibility, appropriate woodland management is required. The alternative is non management or mis-management which will eventually lead to the loss of the species in certain localities.

The tree gets a foothold as a sapling in the cracks and crevices in limestone rock. However, studies have revealed that these niches are being occupied by non-native Cotoneaster, the seeds being taken from gardens and deposited by birds in the crevices denying the lancaster whitebeam of its localised  habitat. 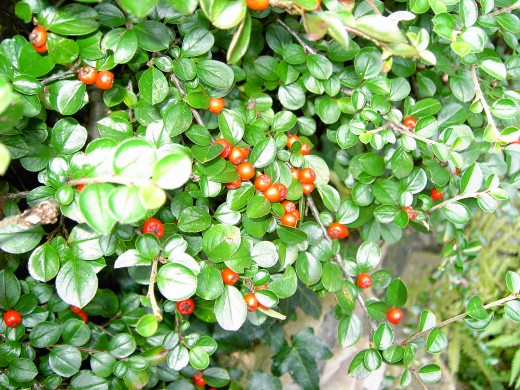 Here in England there is the Limestone Pavement Protection Order, which helps to protect the habitat with stringent regulations. other statutory regulations protect sites of Special Scientific Interest, but even so , specific measures to benefit the species need to be developed even within these sites. Part of the plan being implemented is advising land owners and land managers of the presence and importance of the Lancaster whitebeam.

The S.A.P.  is applying a strategy of preventing more robust and non-native species from shading out the trees.

The full Action Plan for the species may be viewed by Googling The U.K. Biodiversirty Web site.

Limestone Pavements are a protected habitat. 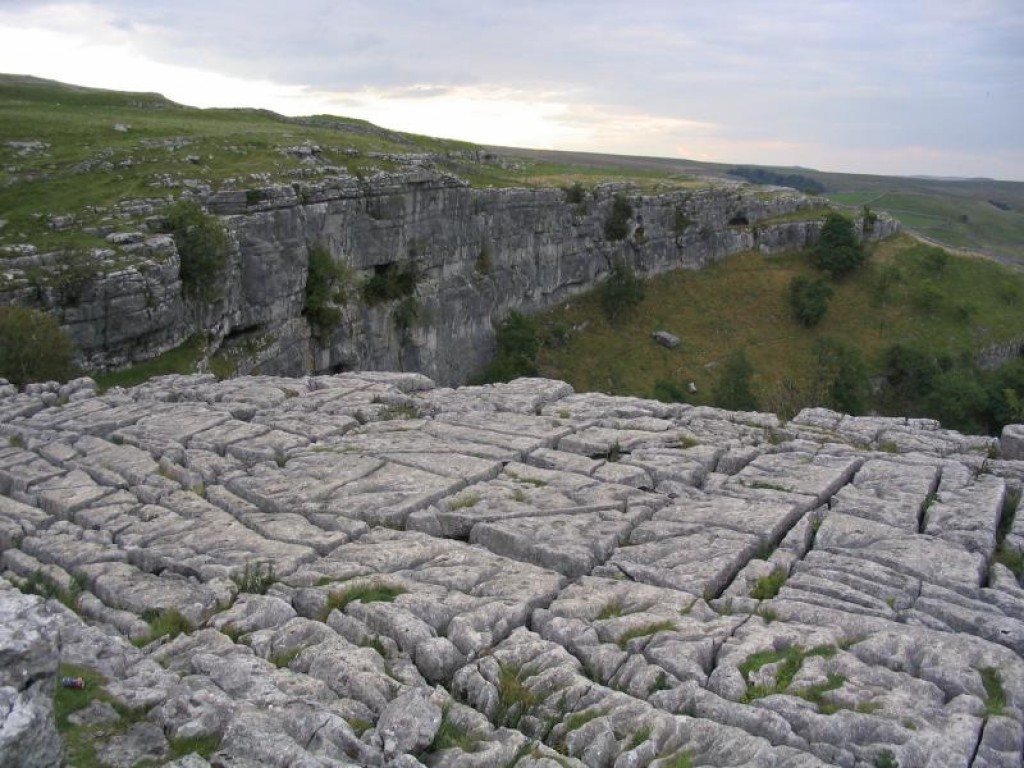 The rowan tree is closely related to the Whitebeam. 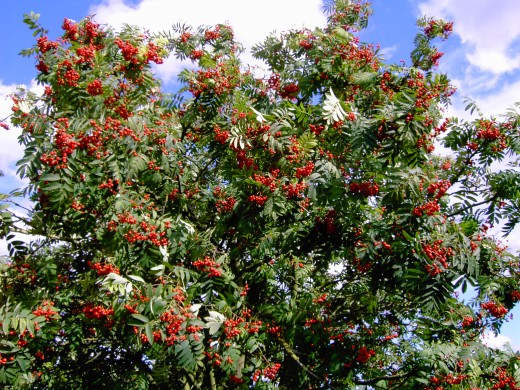