Kestrel on the ground. Dal. dalswildlifesite.com 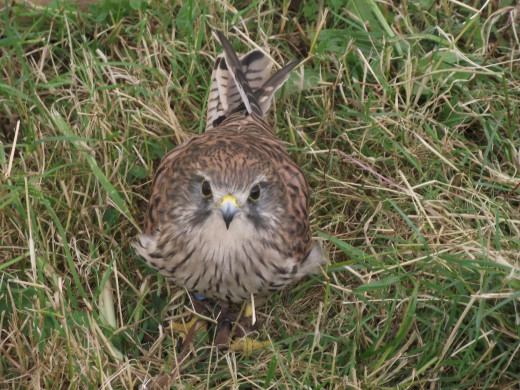 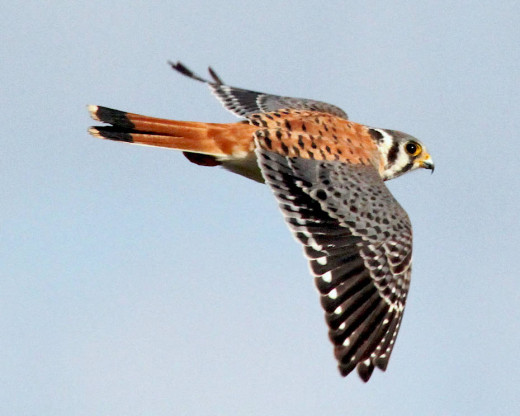 Not to many years ago the Kestrel also referred to as the windhover was the commonest bird of prey in the UK. Sadly during more recent times the species has declined both here and on the continent of Europe.

The Kestrel belongs to the order of birds known as the Accipitriformes and placed in the family Falconidae. The genus name Falco derives from the Latin falcis meaning sickle alluding to the hooked talons. The species name tinnunculus indicates shrill-sounding.

In the UK the bird has been placed on the Amber list of conservation concern. The criteria for inclusion is that the population/ range has declined by between 25-50% over the last forty years or so. There was an estimated 45,000 pairs in the UK at the last count in 2009. In Europe it is 3 concern declining. { source BTO} .

The American kestrel Falco sparverius is sometimes confusingly referred to as the sparrowhawk.

Here we review the species, its lifestyle and habits, with historical notes from past ornithologists. As always we start with a description of the subject under review.

The plumage of the Kestrel tends to change with age, the young,although handsome, are much plainer than the adult bird. The general colour is a brownish red fawn, the feathers being striped with black down the quill to the tip upon the breast and transversely upon the back, these latter feathers being slightly edged with greyish brown. The tail is barred with black and the extremities edge with white.

After the second year the male bird becomes a greyish blue upon the head and neck and down the shoulders and the tail tends to become a deeper blue, barred with black and tipped with white, and, at the same time loses the spots upon the breast and back.

There is little doubt that the male bird becomes handsomer with age, the plumage of successive moults, becomes more defined and generally richer in tone, whilst the female becomes darker. The length of the adult male is about thirteen inches {32-33 cm} while the female may be up to fifteen inches { 37 cm }. This is the norm with birds of prey the female being the larger of the sexes. The male may weigh 190 grams and the female 220 grams.

In relation to their body size the wings are medium long, The tail medium long and the neck short. The legs are short. The bill is medium short hooked and of a bluish horn colour. The cere is yellow as are the legs and skin around the eye. The flight is direct and fairly rapid, also soars. Frequently and habitually hovers, with the tail fanned out and the wings flapping vigorously , followed by a pounce.

There is little doubt that the male bird becomes handsomer with age, the plumage of successive moults, becomes more defined and generally richer in tone, whilst the female becomes darker. The length of the adult male is about thirteen inches {32-33 cm} while the female may be up to fifteen inches { 37 cm }. This is the norm with birds of prey the female being the larger of the sexes. The male may weigh 190 grams and the female 220 grams.In relation to their body size the wings are medium long, The tail medium long and the neck short. The legs are short. The bill is medium short hooked and of a bluish horn colour. The cere is yellow as are the legs and skin around the eye. The flight is direct and fairly rapid, also soars. Frequently and habitually hovers, with the tail fanned out and the wings flapping vigorously , followed by a pounce

Illustration of a Kestrel 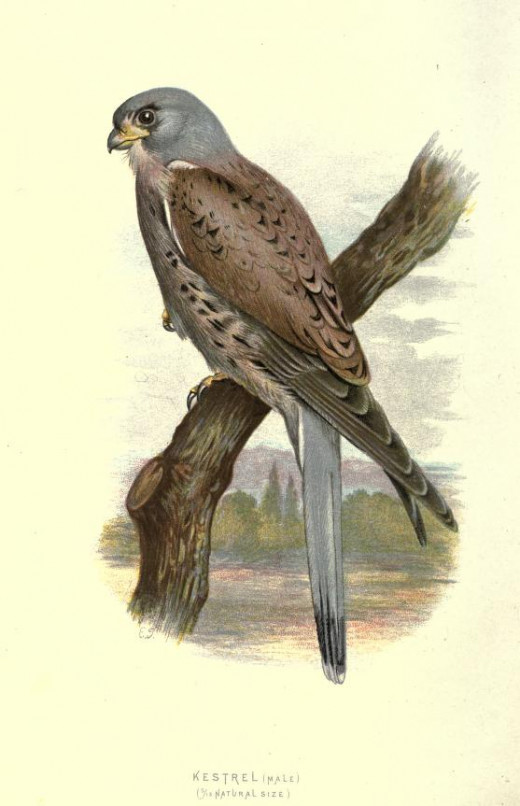 For many years this handsome little bird of prey was subject to the most unwarrantable persecution, however, by the early 1900's it was finally realized by systematic investigation that the kestrel was a bird deserving particular protection, rather than wanton and thoughtless destruction, that had put many birds of prey in danger of extinction in the UK.

The bird was commonly referred to as the 'wind hover' from its peculiar manner in which it regulates its flight whilst in search of food. the flight is generally rapid, but varies, the onward progress being repeatedly stopped, and the bird maintaining itself in one position , as though it is motionless, and, as it were, suspended, whilst the piercing eyes search the grasses or stubble beneath. The slightest quiver is sufficient indication of its prey, when upon poised wing, down drops the bird like a stone to earth. The unfortunate mouse or vole is invariably secured and the kestrel retreats to the shelter of an adjacent tree or hedgerow to devour it.

Many other forms of pests are destroyed by the kestrel as its diet varies with the season. In the spring cockchaffer's, grasshoppers and such like insects may well supplement its staple diet. As summer slides into autumn the kestrel may be observed hovering over the stubble fields, grassland and very often over motorway verges in search of mice and voles. the kestrel takes more of these small mammals than any other bird of prey with the exception of the owls. They tend to tear their food up in the manner of the hawks.

Mr.Gillivary {1800's} stated that kestrels do not take small birds , but the contrary has been witnessed several times. Swaysland in his book Familiar Wild Birds 1883 relates that many kestrels, too, are taken in the Bird Catcher's nets when in the ' very act of attacking the brace, or call- birds, and are in consequence, invariably driven off when observed'

Swaysland also relates " That when the kestrel is replete with food the bird is often mobbed by an assemblage of smaller birds, who at such times congregate together in the common cause quite irrespective of the species. This accompanied by an incessant reproachful chatter,which appears to greatly annoy the kestrel, until a sudden exhibition of its latent powers disperses the little would be assailants, and the bird continues its flight to some congenial spot, where it may digest its meal in piece."

Courtesy of the BHL  Public domain. 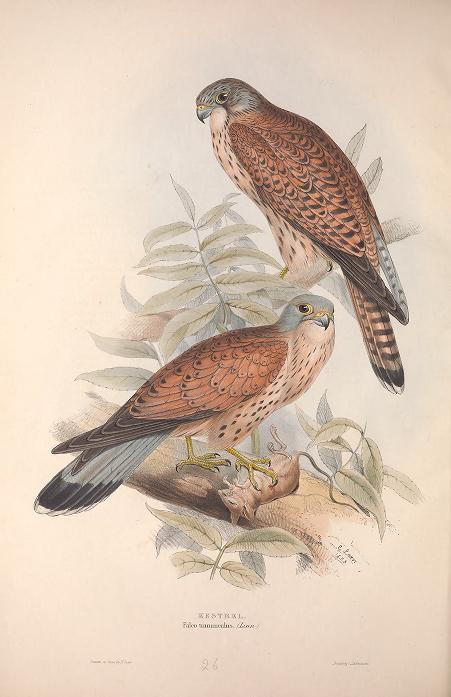 Butler in his book, British Birds with their nest and eggs {1896-98}, conveys " That in captivity the kestrel becomes very docile and affectionate, one the writer possessed was allowed its full liberty, 'flying at hack' as falconers term it, about the house. It would also fly across a large meadow to meet him, perching upon his shoulder, evincing the greatest delight by screaming loudly.

" Knowing what time the greenhouse would be watered, the bird would fly in at one of the windows,where, when settling on the ground, he would raise his feathers, shake his wings, and look up, plainly asking to be watered, and was indulged in a shower bath, through the rose of a watering can. In his extreme youth he had been brought up with a kitten as a companion, and the two friends had many a game of hide ans seek among the flower beds on the lawn. The kestrel pouncing out upon the kitten, and the kitten in turn making sallies upon the hawk. when the kestrel was fed he would first hover his wings over the food, screaming loudly, and the kitten, understanding the meaning of his cries, would often rush up and rob him of his meal."

The kestrel was formerly tested in Falconry, but it appears it never really adapted to the 'spirit', not possessing the skill and dash of the nobler falcons. On this subject Dr. Edward Hamilton stated--" I have trained the kestrel myself to come to the lure, but could never get it to swoop at birds, although I have starved it almost to death; but put a mouse before it, and it would immediately take it. The favourite food was raw meat or mice. Birds when given where always left half plucked or half eaten , as if distasteful" 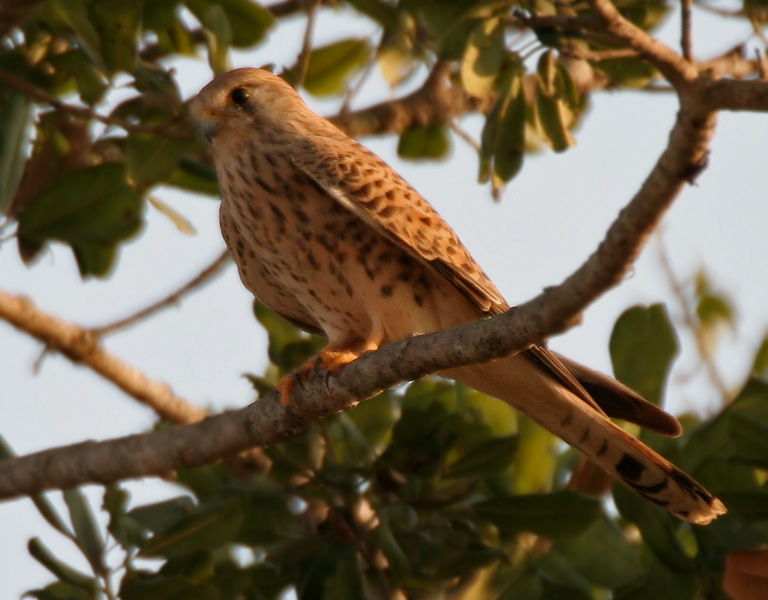 One Mr. Gatcombe of Plymouth wrote the following account --" A Mr.Rodgers, who has an aviary, and deals in live birds, has had a pair of kestrels for many years, which are confined in a portion of a cage only about four feet long and four high by two feet broad, the female of which lays every year. A year or two ago she hatched five young ones, but behaved in an extreme manner towards her off springs.

" The eggs were laid every alternative day, and the young hatched accordingly. But after nursing the chick most assiduously for a day, directly another came out of the shell, she would kill and eat the first one, and so on until the fifth one, when , Mr Rodgers, wishing to save at least one, took the fifth away and tried to rear it by hand, but, to great vexation failed. I myself saw the female everyday with the eggs and young , and therefore can vouch for the truth of this story. The remarkable part of this statement is the birds breeding in so small a space"

In Britain they are just  referred to as the kestrel

Nest and eggs of the Kestrel

The nest of the Kestrel is placed in as peculiar positions as the bird is erratic in its building. In fact , often it is nothing more than a deserted nest of the magpie, or any other large nest perched in the tree tops, and there are records of them utilizing deserted dreys of squirrels. At other times they may locate the nest in crevices of chalk cliffs or chalk pits.

According to Frank Finn in his book 'Eggs and nests of British Birds', the kestrel although only a 'mouser', is one of the 'noble' family of falcons, and far to aristocratic to do any work in the way of nest building,accordingly the eggs are just laid in a hole in a tree, or a ledge of a building or some hole in the cliff face. If it commandeers a nest of some other large bird, far from doing any extra maintenance it will throw out any lining that it may find there.

Large artificial nest boxes will also be chosen by this bird. Wherever the situation she chooses to lay her eggs they are as a rule four to five in number, and have a ground colour of a dim, pale, bluish -white, so blotched over with reddish brown as to greatly obscure the ground colouring.

They are pretty roundish in shape, and are incubated by the female for 28-29 days, she may get occasional relief time from her mate. The young in common with other birds of prey generally, are covered with a white down and are reliant on their parents for warmth, food and protection. They are protected and cared for by their parents for a further 32-37 days before becoming fully independent.

UK-Amber List due to declines of over 25% in population/distribution over the last thirty years or so.