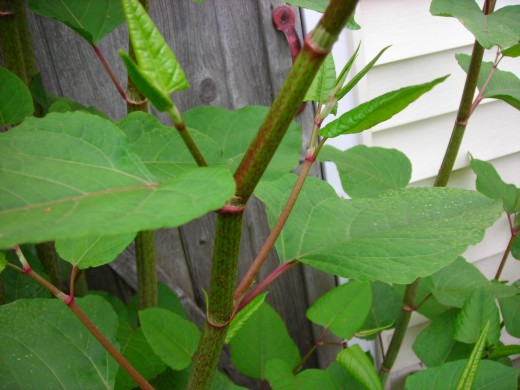 The Japanese Knotweed,Fallopia japonica,is a plant detested by the vast majority of people. It was introduced to the U.K. during the 1800s as an ornamental plant, for parks and large gardens. Like so many others the species escaped over the wall and is now established over vast regions of the country.. In the late 19th century the first garden escape colonies were being reported. Very soon it became established along railways, canals , riversides,waste places, and unfortunately in gardens.

Zig zag arrangement of the foliage. 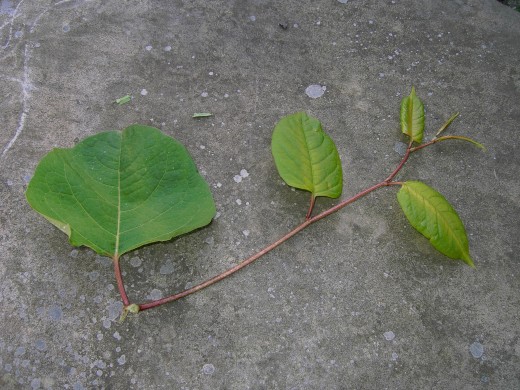 This species forms tall dense stands and copious amounts of foliage which shades out native species of flora including the invasive bracken.The large leaves which fall in autumn make a thick covering in the locality of the plants, making it almost impossible for other species to germinate.

Roots--- The large shoots, often of a reddish colour, emerge in spring. They grow  rapidly and soon attain a height taller than a man.The penetrating roots can burrow to a depth of over two metres. They are rhizomous and perennial by nature. These hardy root systems store all the food required for the new seasons growth, even when the tops and leaves have been killed by winter frosts. These rhizomes eventually form a deep mat which may reach down far into the ground and spread outwards for a distance of 15-20 metres.

These rhizomes produce nodules along their length which in spring send up the shoots which emerge above the ground and are very persistent. Studies have shown that the greater mass of these plants is in fact under the ground. This is bad news for gardeners, because cutting down of the tops which normally weaken plants, only serve to strengthen this species.

n the U.K. the plant spreads by means of these rhizomes rather than by seed which have a poor survival rate. It is thought that fragments of the rhizomes thrown out in garden waste {often dumped on waste land _fly tipping} is a major factor in the plants advancement. Even buried plant material is capable of regenerating, there is evidence that shoots from the plant are capable of growing through tiny gaps in tarmac and even concrete, in some cases pushing this hardcore out of the way as it emerges. It is not a plant that you want in your garden or even your neighbours garden. The slightest fragmentation will procure new growth.

As the photograph above clearly shows the stems are tall, erect, and distinctly blotched along their length.

The leaves are arranged alternately along zig zag stems they are broadly oval -to heart shaped terminating in a sharp point. They are large and numerous. The white flowers are arranged in linear spikes that reach up to 100cm long. They are vine like. The seeds are nuts with three wings which help dispersal. They flower from early August until September. During the latter flowering period they provide a source of late nectar to bees and other beneficial insects.

When in flower I must admit that, as in the case with Himalayan balsam they produce admiral displays. if I were to encounter them in their native habitat , on volcanic larva and along gravelled river sides in Japan , they would probably gain my admiration, however, this admiration all but diminishes completely when the species grows at the expense of native species of flora. 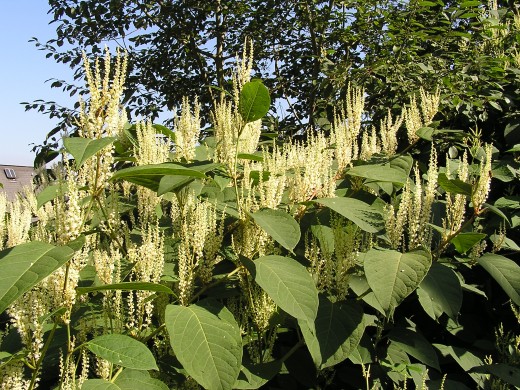 Medicinal uses.--The rhizomes are used in Chinese and Japanese herbal preparations which are used to treat a range of ailments. They are used dried .

In the U.K. a war as been waged against this plant for many years. It has no natural predators. It has been burned, poisoned,dug up, and cut down-all to no avail. So what is the answer?. When all else fails in England, we eat it! I have just read a report that a plant expert who has studied the species for many years has got together with a restaurant near to his home in Brighton. he has persuaded them to serve a series of knotweed dishes. The vegetarian restaurant {TERRE a TERRE} has come up with dishes that includes the knotweed raspberry and ginger dessert.

According to the plant expert Paul Beckett " it is surprisingly delicious a fresh rhubarb taste with the texture of asparagus". The head chef Dino Paviedis stated " it produces a wonderful liquor that gives a real depth of flavour."

This may help to keep the foliage down in areas where this catches on, but until we find away that involves eating the rhizome or utilising it on a major scale it will do little to halt the knotweed's seemingly unstoppable march across our green and pleasant land.

Stone walls or tarmacadam are no obstacle for this plant. 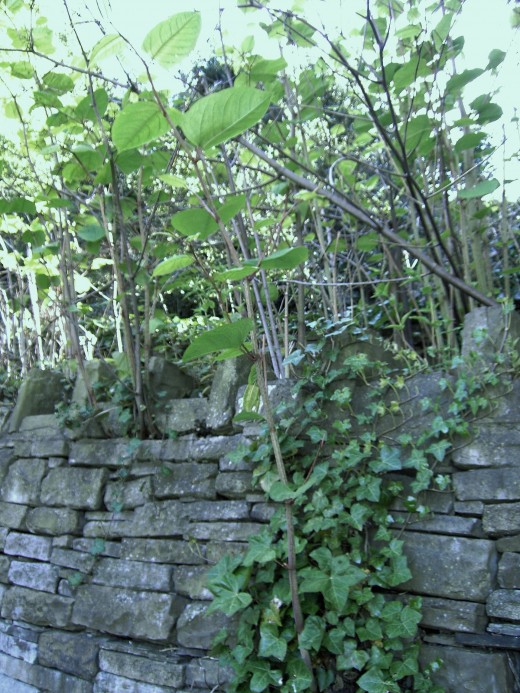 Recently new laws have been passed that make it illegal to let Japanese knotweed escape from your garden or land onto a neighbours land or garden and it may well cost you money if this occurs. Your neighbour has the right to recover the cost from you to get rid of it from their land or garden.