Is it an insect ?- Helping children to recognize an insect. 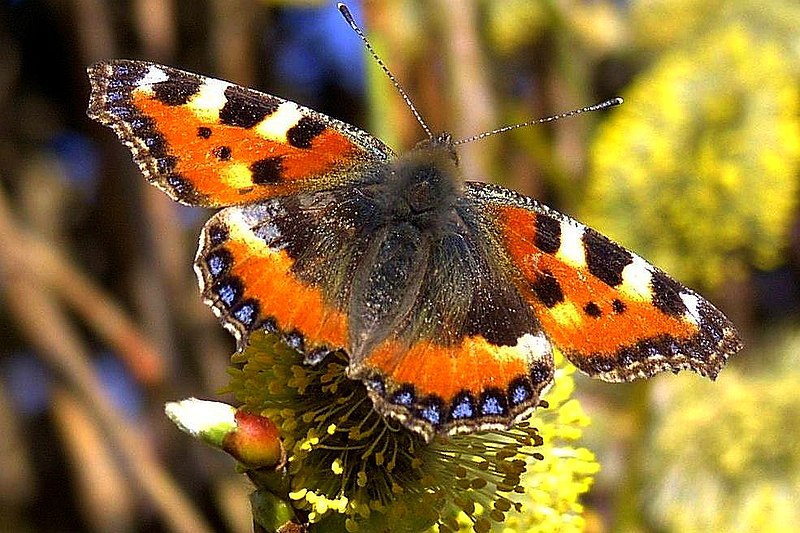 Here on this page I attempt to help children to be able to recognize an insect. It is not as easy for some as one would imagine.  Even some adults call everything that is small and creeps an insect.However, this is incorrect. For instance a bat that flies in the air is not a bird. A whale that swims in the sea is not a fish. Nor is an animal always an insect because it is small and crawls.

Froghopper on an apple tree. This is an insect. 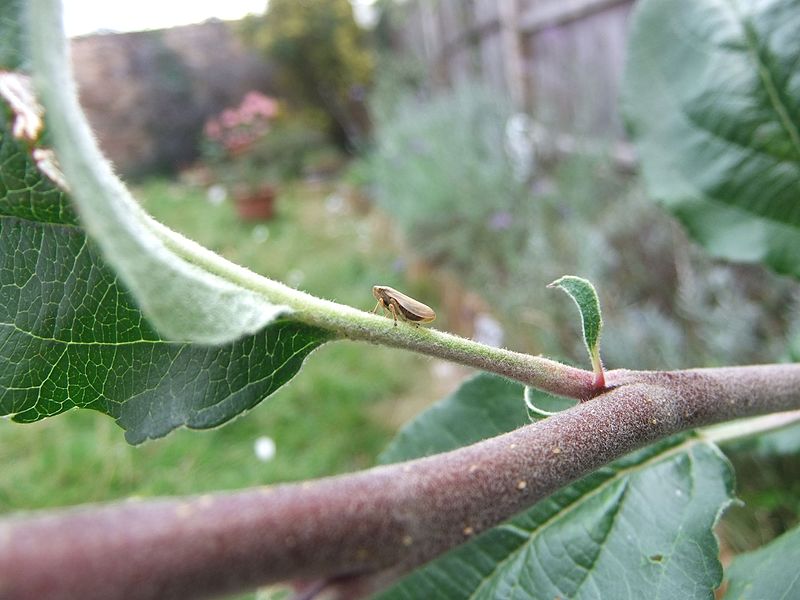 How can you tell if it is an insect or not.

Probably the easiest way to tell an adult insect is by counting its legs. All adult insects have six legs,no more no less. I say adult, for the larvae of insects may well have many leg-like appendages, the best example being a caterpillar the young of a butterfly or moth. However, these are temporary appendages and when the adult butterfly or moth emerge  as adults they have indeed six legs.

Another perculiarity of a typical insect is they possess wings sometimes two sometimes four. The insects are the only invertebrates { having no backbone} to posses wings.  So if we wings and six legs we can tell an insect from other 'creepie crawlies' such as spiders and cetipede. A spider has eight legs and a centipede many more than that, they have no sign of wings and so we can deny them the name of insect.

We may look at an insect  has a creature wearing a light suit of armour. This armour is weather proof and highly durable to suit the rough and tumble of insect life. An insect has no internal skeleton. the 'armour' is a substance called chitin, {the 'ch' is pronounced like a K}.

This suit of 'armour' may be seen in three compartments, the first encases the head, the second, from which springs the six legs, protects the chest or Thorax and the third envelopes the hind body or Abdomen. 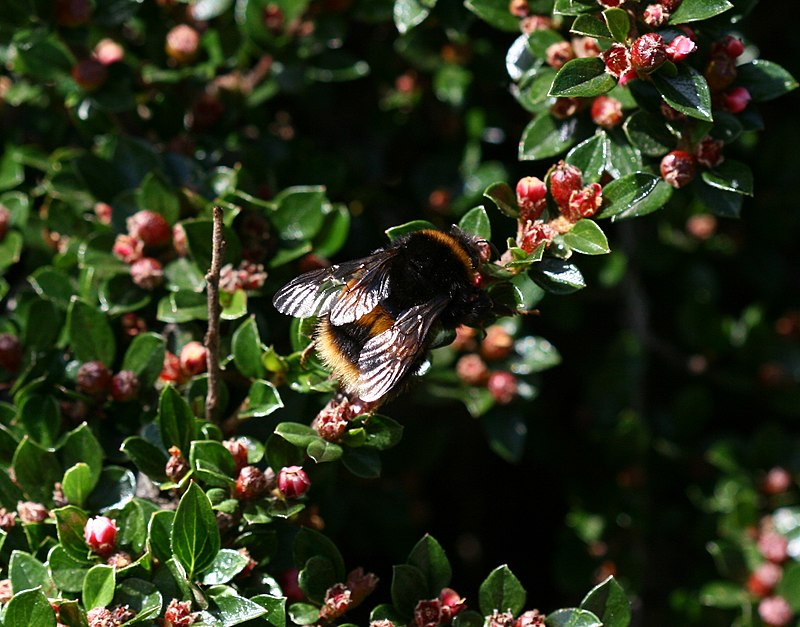 Insects are essentially a hairy race, hairs long and short and differing widely in shape of form are to be found on all parts of their body. These frequently form the colour of an insect and are often the main adornment.

Bumblebees for example have hairs that are arranged alternately black and orange and white, while or other combinations,the so called scales of a butterflies wings are hairs flattened or otherwise modified.

The hairs of many bees are curiously twisted and or branched and designed by nature to help with pollen gathering. In many  species the hairs act as an aid for senses such as hearing touch and even hairs of taste.

Insects have compound eyes which are relatively large to the size of the head. In some species there are an additonal three eyes arranged in a triangle above the brow. These are far less complex in their structure. {Compound eyes image below}. there are however, a few exceptions see How successful are insects below.

Also on the head there are a pair of antenae or feelers whichvary in form and length. { Image above}. These are important sense organs which vary in their function. The mouth of an insect is also varied in form and are wonderfully formed in the case of individual species dependent on what that species eats. However, no matter which species the mouth is not used as a means of breathing as is the case of us humans. Insects breathe through a number of small holes in their side, called spiracles. Where these spiracles allow access to the body they are beset with hairs which help to keep out dust while just within the body there is an ingenius little valve which is opened and closed by muscular contraction.

The air which enters each spiracle is then moved to every part of the body by means of a network of minute pipes known as tracheae. These pipes are so arranged that even the most delicate extremities such as the eyes and antenae are supplied with air.

Antenae on a longhorn beetle. 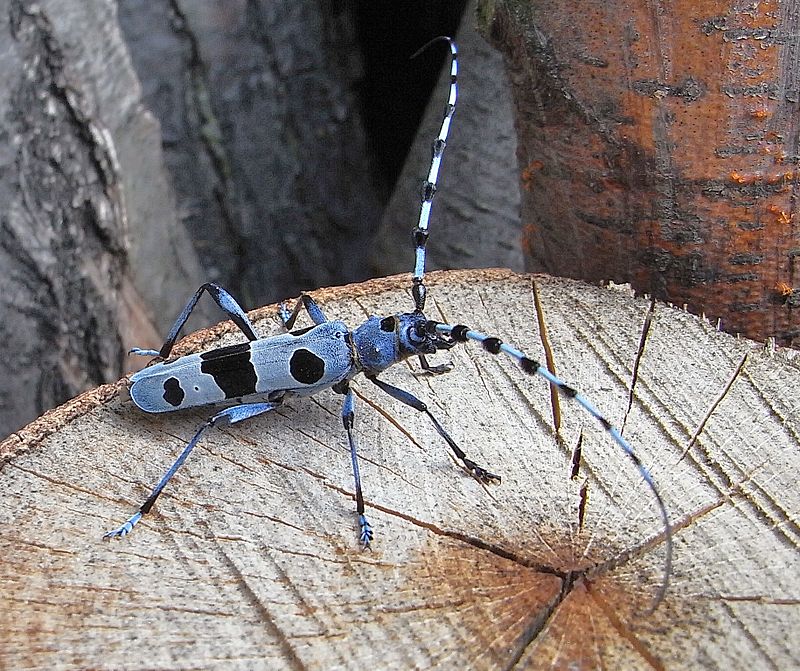 The legs and other features which make the insect successful.

The six legs which are in effect a double tripod afford the best mechanical support.In walking or running the legs are moved forward in sets of three- the first and third legs on the one side and the second on the other, so that a tripod always remains to offer the best support.

Still more valuable is the insects power of flight enabling species to move around sometimes over great distances land and sea. it even allows somw species to migrate {like birds do} to avoid bad weather.

The tissues are constantly bathed with nutritive fluid permeated by oxygen the result affording insects in an abundance of energy. This can be witnessed on a hot sunny day when bees are buzzing and flirting from flower to flower and ants as they constantly climb up the stems of plants to find aphids. 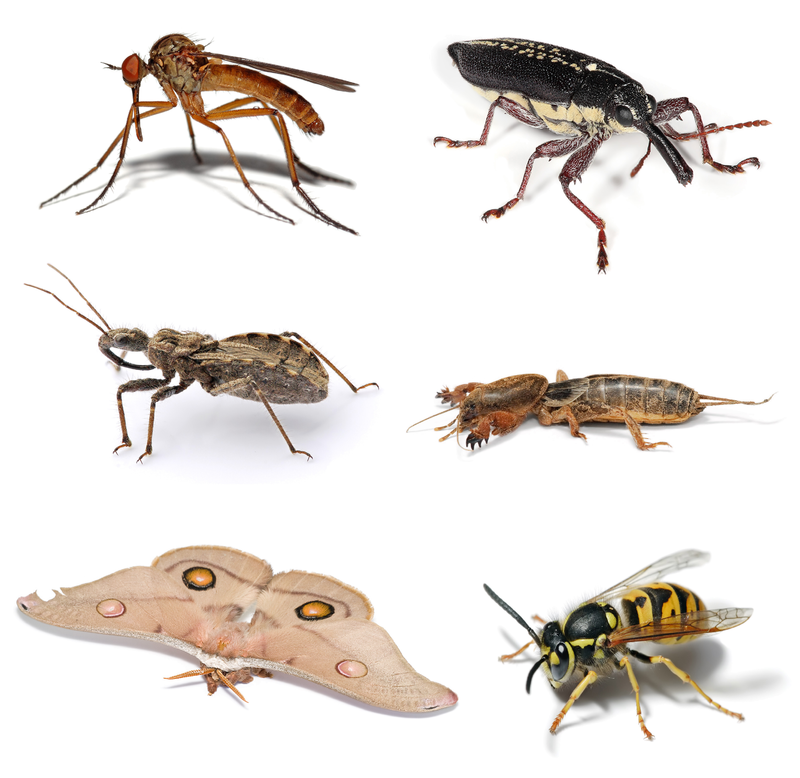 How successful are insects.

To illustrate how successful insects are on our planet they occur wherever animal life exists. Butterflies are found beyond the polar circle and mosquitos are intrepid arctic explorers.  in the past a small species of butterfly was captured on a mountain in Ecuador 16,500 feet above sea level. There are desert insects found where no water is found. Insects are found beneath the earth surface the subterranean chambers and galleries have insect populations of thier own.It has been found that those that live a regular life beneath the surface have no eyes. It seems that the sense of touch is more important than sight to these creatures. 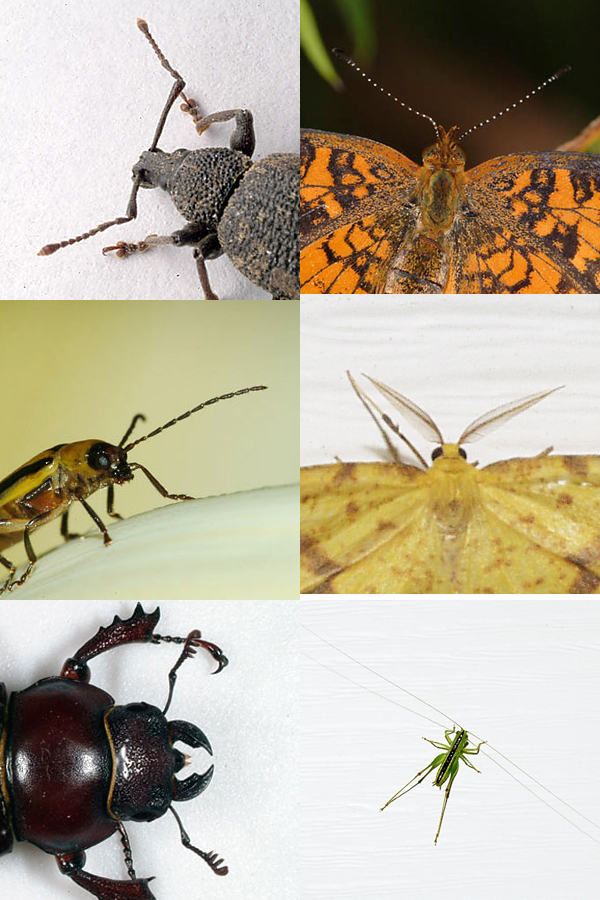 Above the different antennae and more diversity of insect form

Likewise many insects have invaded the fresh waters of the globe and these creatures have many modifications to suit their lifestyles as they have evolved. The aquatic insects will feature on a page of their own in the near future. While some spend their entire life in the water the majority only spend their larval stage in water and when they become adults they join the ranks of the flying insects.

The images on this page may be reused however, the name of the relevant author must be attributed along with any accompanying license.