It is not a necessary requirement to have studied entomology to know the fact that the colours of insects, in the majority of cases, harmonize with their owners surroundings, as to render them more or less inconspicuous, or, on the contrary, are so brilliantly coloured that they draw ones attention immediately.

Both descriptions have their uses in the economy of insects. here we consider them in their order. Colours which harmonize with their surroundings are usually designed for concealment, they render their owners inconspicuous  and thus is described as ' protective colours'. In many cases 'protective resemblance' is a better term than protective colouring, for often there is a similarity in form as well as colour between the insect and its surroundings.

No better example of protective resemblance can be found in insect land than is exhibited by the leaf butterflies of the genus Kallima, which are found in east, south and south east Asia When at rest these insects are almost indistinguishable from the surrounding leaves.

Kallima horsfieldii, this butterfly blends in so well with the surrounding foliage  a case of protective resemblance.

Certain species of our native Lepidoptera exhibit protective resemblance to a certain degree. The Green hairstreak butterfly is a dingy brown on its upper wing surfaces, but when it settles on green herbage, with its wings folded , the emerald under-wings blend in perfectly with the surrounding foliage.

However, we must once more turn to the tropics to see a much better example of Protective resemblance this time in the form of the leaf insect of the genus Phyllium which is as perfect in its protective resemblance as the leaf butterfly. However, as many of the latter resemble dead leaves , the former is green and matches well with green foliage. {see image below}

Examples of protective colouring as distinct from protective resemblance are far more common. The green larvae feeding on a green leaf is so coloured, but there are a few more subtle forms than this. Among the Lepidoptera we have the larvae of the pine beauty moth. Away from their food plant-the pine- they are striking green insects with two dorsi-lateral white lines. However, when feeding on the pine needles, they harmonize so well with their surroundings making them very difficult for a bird or man to locate.

Another green striped larvae, that of the Privet hawk moth is even more conspicuous when viewed in the hand, but, even though it is a large caterpillar when fully fed, it harmonizes well with its food plant the privet.

Example of Privet hawk moth larvae harmonizing with its surroundings 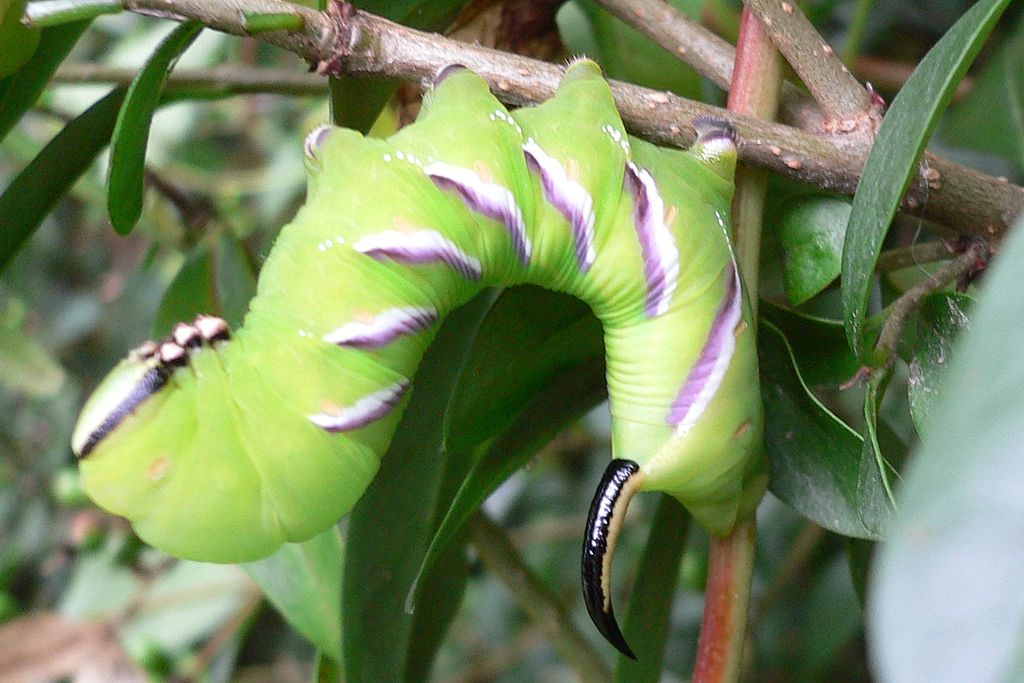 The protective colouring of certain Lepidoptera larvae varies with their surroundings. For example the larvae of the peppered moth, the larvae of one brood, when fed upon green leaves become green in colour. others of the same brood and fed in a similar manner, when compelled to live upon brown twigs, in nearly every case become dark brown.

there are hundreds of examples of Lepidoptera, when at rest, arrange their wings so that the colouring afford them maximum of protection.  Species with brightly coloured hind wings, but sombre fore wings will invariably be found resting on some lichen covered post or rock, with their wings so folded that the bright colours are hidden from view.

Species whose under sides harmonize with their surroundings rest with the upper surfaces of their wings in contact, so that only their lower surfaces can be seen. Many larvae spinning silken cocoons have the power of making the colour of the silk closely resembling that of their surroundings . However, despite all this marvelous colouring , no adult insect is capable of changing its colour to suit its surroundings, in the manner of say the Chameleon.

Many of these insects emit noxious acid or alkaline substances when touched, and the young predator, which ever his kind may be, soon learns by experience to avoid such insects. bright colours are not absolute protection to every individual, for animals only learn from experience, and many insects are sacrificed that the majority may enjoy immunity.

Protective if the weaker, harmless insect mimics, aggressive if a predatory species mimics the insects on which it preys. Examples of protective mimicry are not hard to encounter. The wasp beetle mimics wasps very closely in colour, and to some extent form. we have the common British species Clytus arietes.

Our Hornet Clearwing moth Sesia apiformis can hardly be excelled as an example of protective mimicry, for its resemblance to the Hornet Vespo carabo could hardly be more perfect in an unrelated insect.

Experience has shown other animals that these and other mimics are better left alone, thus the mimic shares the comparative immunity enjoyed by the species it simulates.

The wasp beetle shows an example of protective mimicry.

Hornet clearwing moth is another fine example of protective mimicry

Links- My green logo  {designers}  See what Chris and Terri can do for you.