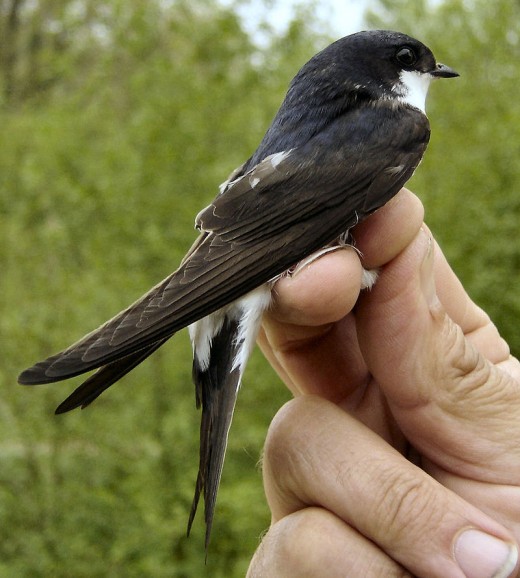 Source: Courtesy of Aelwyn who uploaded it to Commons CC BY -SA 3.0 unported license

The House martin Delchion urbica,belongs to the order of birds known as the passeriformes {perching birds} and the family Hirunindae within that order. They have been allocated the genus name of Delchion,froman anagram of Chelidon which derives from the Greek Khelidon -a swallow, the specific name of urbica derives from the Latin urbis a city.

In the UK they are currently on the Amber list of conservation concern { losses of between 25-50%} 2014.{ there is an estimated population of 510,000 birds in summer {2014}.} over the last forty years or so. However, recent figures suggest the decline in the UK is now more than 50% and if this is confirmed it will be placed on the Red list of conservation concern. So concerned are the British Trust for ornithology {BTO} is currently organizing a survey of House Martins which will consist of two elements.

The first element will be a random 'square ' survey which will involve volunteers across the UK surveying 1-km squares and mapping nesting sites. This survey will provide a robust UK population estimate which will act as a baseline against which future changes can be measured. The second element, the Nest Monitoring Study which will begin 2016,will involve an observation of nests. This nest monitoring study will give the BTO important information about the site locations,arrival dates,time of breeding,number of breeding attempts and breeding success.

The reasons for the declines are unclear and it is hoped by the BTO that the study will increase their knowledge and be able to stop the bird declining further and to keep them off the Red list of conservation concern. The species is listed by Birdlife International as being Globally Threatened using International Union for Conservation of Nature criteria. In Ireland they are also Amber listed due to European declines although it is a common summer visitor there {Source BTO}.

In Europe they are of 3 concern,most not in Europe declining. The estimated population in Europe is between 9.1 million and twenty two million pairs. The populations vary from country to country there follows a few examples. 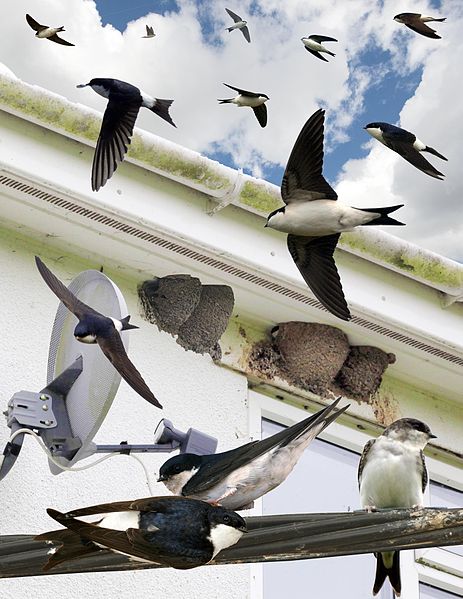 The adult House Martin has the upper parts to the rump a glossy blue black. The rump itself and the inner tail coverts and under parts are white. { the rump is very conspicuous in flight} The wings and tail are brownish black slightly tinted with green. The bill is black.

The feet are horn -yellowish ,but densely covered by fine white feathering. The tail is forked.

The female is similar and impossible to tell apart in the field. Apart from the colouring the House martin can be told from the Swallow by the absence of long tail streamers to the tail feathers. 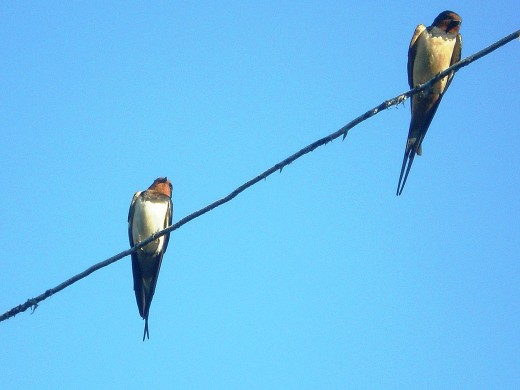 The pretty twittering of an House Martin over your window is a pleasant way to be awakened on a sunny spring morning. According to Butler 1898, the House Martin in its habit much resembles the Barn Swallow, but " Why Seebohm went out of his way to assert its legs are too short to allow it to walk I do not understand. For it can not only walk,but run nimbly for short distances,without erecting its wings,though if it is in a hurry,it uses its wings to assist in it taking surprising leaps"

The call note of the House Martin is a thin whistled sound while the song is a modulated twittering. Its diet consists wholly of insects obtained on the wing.

House martin and captivity---- It seems that even the House martin has been kept in captivity in former times when it was legal to do so. I return again to the notes of Butler who reveals his notes on the House martin in captivity.he says-- " In confinement it will readily eat the usual soft food. In the first week of July 1891, my colleague, Mr. W.R. Ogilvie Grant,obtained a nest of four House Martins,about a week old,and gave them to me. Following the mistaken notice of many aviculturists I had first fed theseyoung birds partly upon raw rump steaks finely minced, but also gave them a mixture of carefully selected ant's cocoons,and preserved yolk of egg,ground up in a mortar with maizena wafers, the whole carefully mixed together and slightly dampened. Upon this diet all four attained their full size,after which they refused the raw meat, but continued to eat the mixture greedily.

" I kept these birds in a basket filled with hay,and, several times each day they were taken out and encouraged to fly about the room. But now began to object to return to the close confinement of their basket,therefore I purchased a large cage,hung up a cocoa -nut nest lined with flannel in one corner, and taught them to return to it every evening or whenever they appeared to feel the cold.

" At the end of the month the Martins were able to feed themselves,and, like all good Hirundinidae when accustomed to soft food they ate far more than was good for them. I now tried to change their diet,giving 'Abraham's Food for Nightingales', damped ant's cocoons,cut up meal worms and flies, but it was of no use, for the three of them soon died of plethora and, probably, in part,owing to insufficient exercise,although we did our best to encourage them to exert themselves in various ways.

" One of our plans was to put all four on the ground at one end of the room, then run up to the other end and call them.This was the single for a most comical race, in which at first they ran at a surprising speed though very awkwardly, but, as they became excited in the race, used their wings,and finished with a series of astounding leaps,finally flying on to out arms,and either running up our sleeves, nestling down in the hollowed palms of our hands, or perching on our shoulders.

" My son often used to hold one up in his hand,and it invariably sprang up and pecked his nose, but only one of the four would do this.. My fourth bird lived with us until the morning of September the 18th,and, became a general pet. His cage was kept in a small spare room, the wire door was usually kept open,so he could go out and in at pleasure. Everyday,as soon as I returned from town, I used to run up and call him, and he would at once fly to me and nestle down in my hand. Towards the end of his life he appeared to feel the cold, and usually retired early to his cocoa nest, but he generally tumbled out as soon as he heard my footstep.

" Two days before he died his cage door was shut and he had got into his snuggery, but I called out. In a moment hid head popped out and he sprang to the cage door. I opened it, stepped back to the end of the room and called him, and he immediately flew across as usual. I do not think I was ever more fond of a pet than I was of this House Martin,and I felt his death acutely, but,nevertheless,I do not recommend this species as a cage bird, its wings are so long, and its legs so short, that the primaries constantly get dragged through the dirt and need frequently cleansing, which tends to give the birds cold. A long and well warmed corridor would make a suitable aviary for them."

Juvenile on the ground. 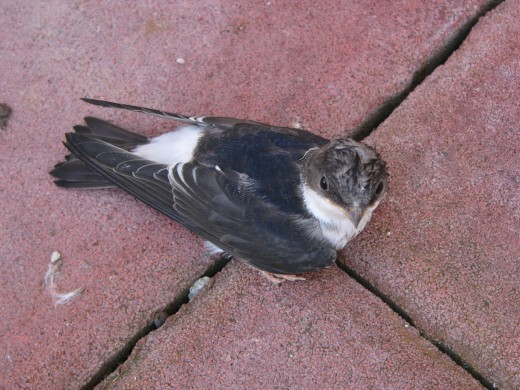 " Would I a house for happiness erect,

Nature alone would be the architect" { Cowley}

Each nest constructed by these industrious birds takes one thousand + of beak sized mud pellets to complete. They traditionally built their mud nests on cliff faces. By the 19th century they started making use of buildings allowing them to expand their range. By the 1900's they had all but abandoned their traditional sites in favour of close contact with humans.

They are colonial nester's taking advantage of under the eaves and outer walls of buildings or even sheds. There are usually four to five nests,although many more may occur together. The breeding season runs from May to August when insects are abundant. However, late nests may have chicks in as late as September.

The nest itself is made by using the mud pellets as mentioned above , mixed with grasses and it is usually lined with feathers and vegetable fibres. It takes about to weeks to complete, however, if they are repairing an existing nest this will only take a few days.

Eggs of the house martin. 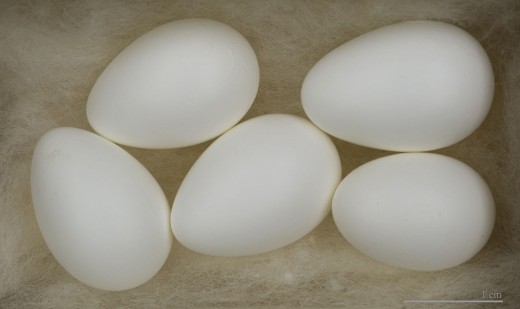 Four or five eggs are laid at daily intervals,sometimes delayed by bad weather. The eggs are incubated for between fourteen and sixteen days and the chicks hatch together. The female will brood them for a week or so while the chicks are naked and vulnerable. Both parents feed them.

These historical notes were recorded in the 'Naturalist' { volume one pages 23-24} , by George B Clarke of Woburn, Bedfordshire.

" In the summer of 1849 a pair of martins built their nest in an archway at Woburn Abbey,Bedfordshire, and as soon as they had completed the building of it and had lined it, a Sparrow took possession of it. Although the Martins tried several times to eject him, they were unsuccessful, but they,nothing daunting,leaving him in full possession ,flew off to scour the neighbourhood for help,and returned with in a short time with about thirty or forty Martins who dragged the unfortunate sparrow out ,took him to the grassland opposite,'called a circle' and here all fell on him and killed him" Then the author adds { a little piously} " This was related to me by an eye witness, a day or two after the occurrence took place" 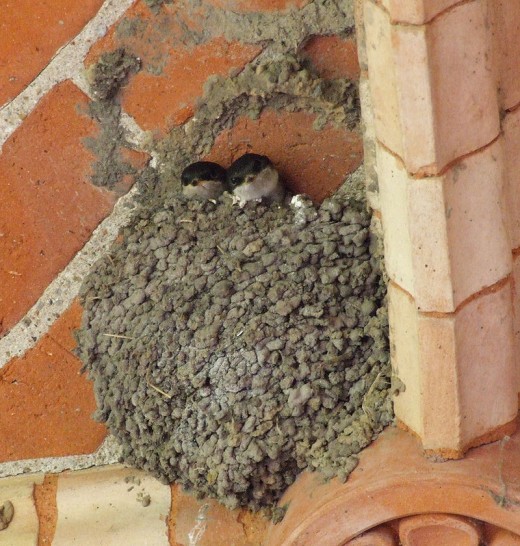 The young birds are smokey brown above, the rump and underparts a sordid white. The inner most secondaries tipped,and most quills edged with white. The tail is shorter and less forked.

While Martins are rarely affected by predators House sparrows frequently damage or take over nests and attack both young and eggs. {also see introduction above}.

After the breeding season both young and older birds gather in numbers on telegraph wires and other structures no doubt contemplating their long journey back to Africa. 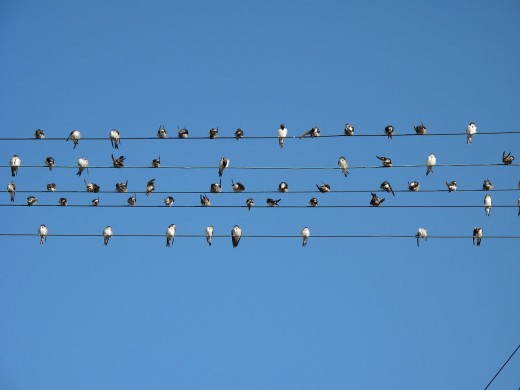 UK-Amber list due to declines in population/distribution of over 25% over the last fifty years or so.

Thank you for visiting,

A look at Hirundines in the content banners above.