Horseradish in flower, growing in the Botanical Garden, Utrecht Netherlands. 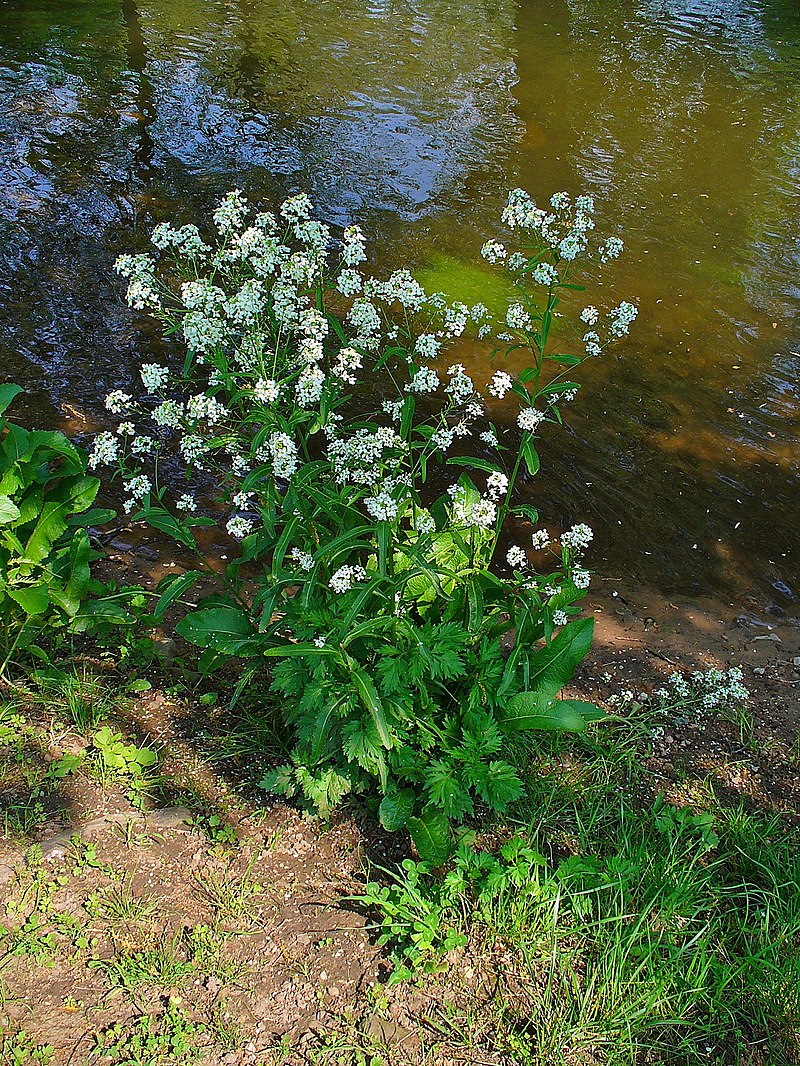 The Horseradish, Armoracia rusticana, was a plant introduced during the 15th century,and grown in the vegetable garden,where it was cultivated for its long,white,tapered,pungent root,which was grated and made into  a sauce.

It is a large plant which may attain the height  of up to five feet { 150 cm }, .  Since its use as a vegetable cultivar of times gone by, it has escaped and become established far and wide and now be encountered on wasteland,riverbanks and on roadside verges,especially in England.

They have two types of leaves basal and stem leaves. The basal leaves are stalked,up to two feet long {60 cm}, dark green in colour and shiny. The stem leaves are not stalked and are smaller, narrower but still wavy.

The plant does not always produce flowers but when it does they occur in large,leafy panicles. The white  petals are twice as long as the sepals. Sometimes pale pink, or cream coloured flowers may be encountered.

It is a perennial plant which belongs to the Brassica family within the order of plants known as the Brassicales. It is probably a native to southern Europe and western Asia.

Horseradish sauce, which is readily available in stores, is a popular condiment in the UK,often served with roast beef. It is often used as an alternative to mustard. It is also a popular  condiment in other countries such as Poland. It has an high Vitamin C content. It is widespread in the United States.

Sections of the roots of the Horseradish plant.

History and uses of the Horseradish.

In the older herbals it is found under the name of Cochlearia armoracia,  and it was the root that was used against ailments such as Paralysis, rheumatism, 'Dropsy' {water retention} and some cutaneous {skin} affections.

A syrup was made with a concentrated infusion of the root which was said to remove hoarseness. Steeped in cold milk it was said to form one of the best cosmetics available. The leaves were also used medicinally in preparations. In England in 1548,the plant was referred to as Red Cole.

Gerard 1597, referred to the plant as Rhaphanus rusticanus,and he revealed it occurred in the wild in several parts of England and went on to state " Horseradish,stamped with vinegar put thereto,is commonly used among Germans for sauce to eate fish with and such like meates as we do mustarde.",

At that time Gerard was pressed to convince his fellow countrymen to treat the root as a condiment as well as for its traditional use in medicine. He states " Divers thinke that the horse-radish is an enimie to vines,and that the hatred between them is so great, that if the rootes heerof be planted neere to a vine, it bendeth backward from it as not willing to have fellowship with it".

By 1640, Parkinson heralded its spread as a condiment when he wrote of the sauce, " With country people and strong labouring men in some countries of Germany,and in our owne land also, but, as I said, it is too strong for tender and gentle stomaches"

In 1657, Cole wrote of the 'commonly known fact' " That the root sliced thin and mixed with vinegar is eaten as a sauce, with meat as among Germans" It is named 'Horseradish' to distinguish it from the edible radish so common as a salad ingredient until this day.

Today the Horseradish is considered as a very useful ingredient as being warm, antiseptic,antispasmodic, diaphoretic and decongestent.

Black mustard is an annual which can attain the height of 1.2 meters.{ Five feet.} The foliage is stalked and irregularly toothed,or pinnate, the upper stem leaves are entire. The upper leaves are spear-shaped and pointed. They produce flowers in racemes, the yellow petals are longer than the sepals. They flower in June until September. The resulting seed pods are relatively short with a short beak,smooth and borne erect about 1-2 cm long {one inch}

History and uses of Black mustard.

The ancient Greek physicians recognized the virtues of this plant as a medicinal herb. It is thought that the Romans may have introduced its use as a condiment. Gerard in 1623 stated " the seeds of mustard pounded with vinegar makes an excellent sauce,good to be eaten with any grosse meates, either fish, or flesh, because it doth help digestion,warmeth the stomache and provoketh appetite".

Another writer stated " in Glostershire about Teuxburg, they ground mustard seed and make it up into balls,which were brought to London and other remote places as being the best that the world affords."

Records reveal that all mustard was formerly made up into balls with honey or vinegar and probably a little cinnamon and kept until required. The Romans treated the plant as a green vegetable and they ate the young leaves in salads. Medicinally, they are considered to be irritant, stimulant, diuretic and Emetic. Mustard,was used in the form of poultices for external application and placed near the place of the ailment such as inflammation,chiefly in Pheumonia, bronchitist and other diseases of the respiratory organs.

It was once also used to relive congestion of various organs by drawing the blood to the surface 'as in head infections'. In the modern herbal first published in 1931, Mrs M Grieve,states that the hot water poured on bruised Black mustard seeds a stimulating foot bath and helps to throw off a cold or to dispel a headache. It also acts as an excellent fomentation.

It also thought to stimulate the appetite and to aid digestion It is also used for circulation,rheumatism and bronchial catarrh. The leaves may be cooked  in the manner of Spinach or when young and fresh to be added to salads.

Associated Pages. Click on the relevant content banner at the top of the page and scroll down.

Flora via the Links banner. Click on the links banner. Scroll down to relevant box.Click, this is a direct link to the article and images.

Flora via your search bar . Click on the relevant content banner at the top of this page. Scroll down to relevant title. Type the shortened address into your search bar. This is a direct link to the article.

All other flora that occurs on this site are grouped together in the content banners above.