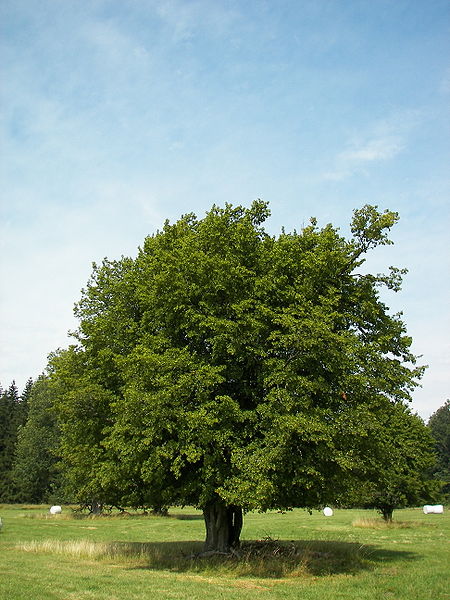 Hornbeams belong to the Birch family of trees, Betulaceae, and are given the scientific name of Carpinus betulus.

We begin this review of this beautiful tree by discovering the origins of its common name, which derives from the hardness of the wood + beam , and old English name for a tree. I will share with you John Gerard's explanation of the name {1500s}--" The wood in time waxeth so hard that the toughness and hardness of it may rather be compared to a horn than unto wood and therefore it is called hornbeam or hardbeam" The genus name of Carpinus derives from the Celtic 'carr' meaning wood + pen {head}, the wood formerly being used to make yokes for oxen.

It is without doubt a native tree to southern parts of Britain, but in the north of the UK it only occurs as an introduction being planted as an ornamental tree. It approaches the beech tree in general appearance, but is usually of a more trim and more shapely appearance. The tree is much smaller in the height that it attains rarely growing higher than 50 feet, even when it is anchored in suitable locations. The leaves too, are more deeply serrated than those of the beech { see description below}.

in his book 'British grown Timber and Timber Trees' {1916}, Angus Duncan Webster gives the following account of the hornbeam. " The Hornbeam timber is scarce and valuable, and though it is remarkable for its close grain and even texture, is rarely used for structural purposes. Big logs are apt to become shaky, and, unless very carefully seasoned, the timber is subject to cracking by which it is rendered unfit for the most important purposes."

"For making shoemaker's lasts { a model for shaping or repairing shoes -Dal}, it is one of the best know, the nail holes closing up on their own accord. For 'bushing' { a lining for a round hole especially one that an axil revovles} in saw mill rollers and cogs in mill gearing. It is one of the most valuable timbers in the production of skittle alleys and pins, hornbeam is almost exclusively used. The skittles are are 18 inches long but not less than 8 inches in diameter."

" The timber is still in use as one of the best firewoods known. The Timber in fully developed trees is of a dirty, or yellowish white colour, hard, tough and remarkably close grained with little or no sap wood and burns well. The price of hornbeam timber varies, but that from Epping Forest { southern England} where a considerable quantity is annually disposed of, realises as much as seven shillings and six pence per stem of 6-8 inches in length. Since the war { First World War} ten shillings per length has been obtained. Pieces for skittles fetch one shilling for each skittle. For skittles pollards are preferred to maiden trees. Fifty two trees containing on average 23 cubic feet of timber, each were sold at two shillings per foot lately, 12 miles from London"

Foliage of the Hornbeam 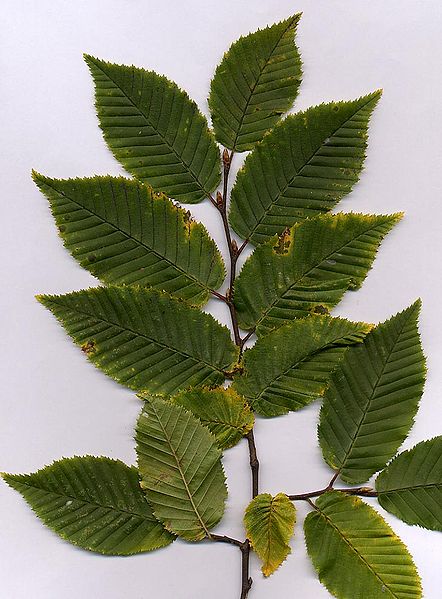 The trunk is straight and often spirally fluted, the bark being smooth and of a light grey-green colour even in mature trees. The boughs grow in an upward manner and produce many branches {ramify}. They tend to be slender and round, and the branches subdivide into branches with pendulous ends, which bear a large number of delicate twigs.

On the lower branches these twigs tend to grow in flat layers in the manner of the beech tree. The habit of the upper branches bears some resemblance to the wych elm. The outline of the hornbeam when in full leaf was described by Ruskin as being--" An inverted pear with the stalk downwards" 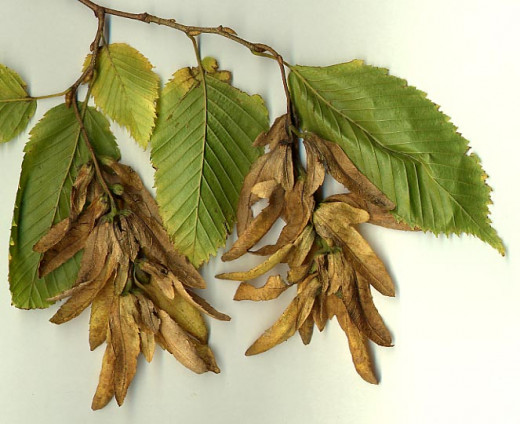 Male and female flowers in the form of catkins are found upon the same tree. The male catkins appear first even before the leaves open and grow singly on alternative sides of the twig. They take the form of cylindrical catkins during April measuring from one to one and a half inches { 2.5-4cm} long, hanging from the branches.

The stamens are concealed by a pointed, pale, yellowish-green cap, which is triangular with a somewhat metallic sheen and a reddish hue at the tip. By the end of April the catkins attain their full length which is about two inches, the little caps spread out and display the red stamens, which, soften the effect of the catkin, turn yellow.

By this time the female catkins make their appearance, smaller than the male flowers, and much less coloured by the pointed caps, between which the stigmas show, they are thread like and of a crimson colour. At the base are green scales which are similar to the leaf stipules in form. By June these catkins are a very salient feature of the tree having lengthened to about four inches {10 cm}. The female catkins remain on the tree until autumn {fall} when the seeds are ripe. The male catkins enhance the colour of the tree by being present on the bare branches, whilst the female catkins, along with the foliage densely cover the tree. 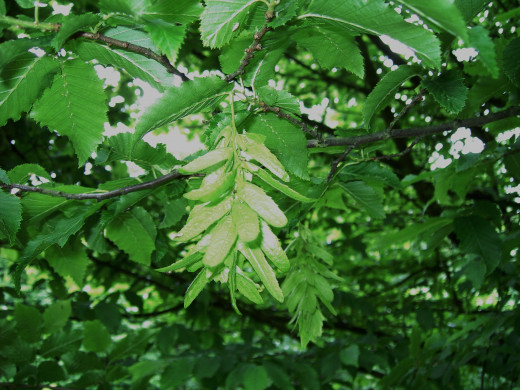 Seedlings of trees are a subject of interesting study in their own right. The seedlings of this species highlights the dissimilarity which so often occurs between the seed leaves of a tree and the true leaves which subsequently follow. The seed leaves of hornbeam have a disc-like form, a flat surface and a straight untoothed margin In comparing seed leaves with the true leaves many points have to taken into consideration. For example some cotyledons {seed leaves} have no stalks, while the true leaves may have long ones. The cotyledons may have leaves arranges in a pair, the one opposite the other on each side of the twig, while the those true leaves on the branch of a tree may be alternating with each other on opposite sides of the twig.

The leaves---The buds grow alternately on the twig and lie close against it, they are long broad and pointed. About mid April the tips of the bud turn a pale green colour. The leaf is folded length ways along along  its veins and these are covered by silky hairs which protect the tender bright green leaf blades. A pair of long stipules further protect the young leaf as it emerges, the tips of the stipules have a pinkish hue.

The leaves soon expand and flatten out in a similar manner to those of the beech tree, but, are told by their unpolished surface, the bases being broader and the margins toothed and the tip is pointed {see photograph above}.

The leaves soon expand and flatten out in a similar manner to those of the beech tree, but, are told by their unpolished surface, the bases being broader and the margins toothed and the tip is pointed {see photograph above}.

The new foliage of spring is a fresh yellow green colour which summer turns a deeper green and the autumn {Fall} turns yellow and gold. During the winter the leaves turn to a rusty brown and like the withered leaves of Oak and beech they still cling on to their arboreal mothers. This make them good candidates for hedging, especially for a shelter hedge in the garden to protect more tender species during the cold winter months.

The leaves are arranged in such a way by nature's economy that every available space is occupied with very little overlapping, so that every leaf can attain the maximum supply of air, light and moisture, which together contribute to the well being of the whole tree.

The information below is for interest only and not intended to be a recommendation as hornbeam use in home made medicine or other herbal preparations.