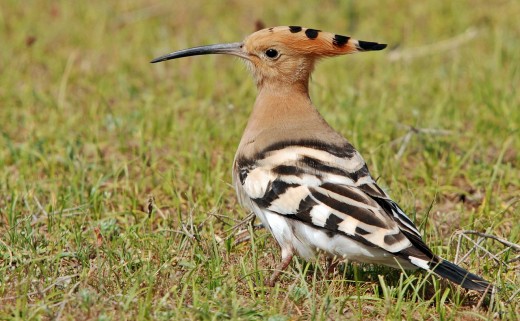 The Hoopoe belongs to the Order of birds known as the Bucerotiformes and the Family Upupidae within that order. The genus name of Upupa is the Latin word for the bird, and the specific name of epops is the Greek name for the bird.

As far as conservation status is concerned in the UK -they have not been accessed. In Europe they are of 3 concern {most not in Europe declining.}

In the UK it is classed as a scarce breeder and passage visitor, 'epops' recorded in Britain is one of eight sub-species in the world. There are about 116 recorded annually in the UK. In Europe the estimated population is between 830,000-1.5 million Breeding pairs. The populations vary from country to country below are a few selected examples.

They breed in Europe, north west Africa and southern Asia. They are birds of Savanna, Steppe and open woodland. they feed on large insects their larvae and pupae, feeds mostly on the ground. 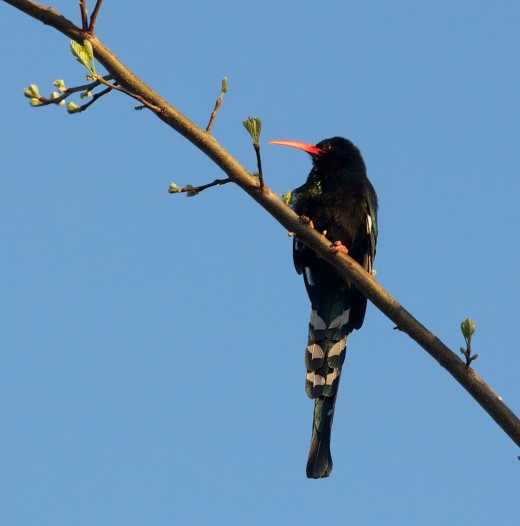 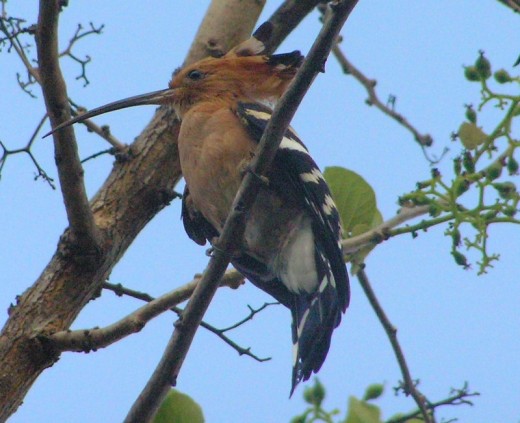 Bucerotiformes an order that contains the Hornbills ,Hoopoe and wood Hoopoes. They are sometimes classed with the Coraciiformes  {kingfishers,bee-eaters Etc}, but most ornithologists agree they are distinctive enough to warrant being placed in an order of their own.

As far as Hoopoes are concerned there are two genera to which they belong. The wood Hoopes are placed in the genus Phoeniculus the species being The Green wood Hoopoe {pictured above} the Violet Wood Hoopoe, the Black billed Hoopoe, White headed Hoopoe and the Forest Hoopoe. Our subject belongs to the other genus Upupa. This genus also includes three other species The Northern bald ibis, Red billed Chough ** and  Upupa paradisea.

Hoopoes are medium sized birds up to 12.6 inches long {32 cm} and they have long tapering bills. The strong musculative head allows the bill to be opened when probing inside the soil. they have broad rounded wings. The hoopoe is the national bird of Israel.

Here we look at the species Upupa eops and as always we commence with a description of the species under review.

The male bird has a conspicuous crest of large cinnamon feathers tipped with black on the crown, some of the feathers are also sub-terminal with a band. The crest can be erected or depressed at leisure. When at rest it is normally depressed, but when the bird alights on the ground or when the bird is excited it is raised.

The upper parts are cinnamon, paler and barred black and white on the lower back. The Rump is white. The wings are black, varied with white bands, excepting the inner secondary feathers which are striped with buff. The tail is black ,crossed by a white belt, the outer extremities of which almost reach to the tips of the outermost feathers. The fore-parts below are of a rather more rosy cinnamon than on the upper parts.

The abdomen and under-tail coverts are white. The bill is black, flesh coloured at the base of the lower mandible. The feet are deep brown the iris pale brown. The female is slightly smaller and the crest, wing and bill are decidedly shorter. The young are much duller and have a shorter bill. 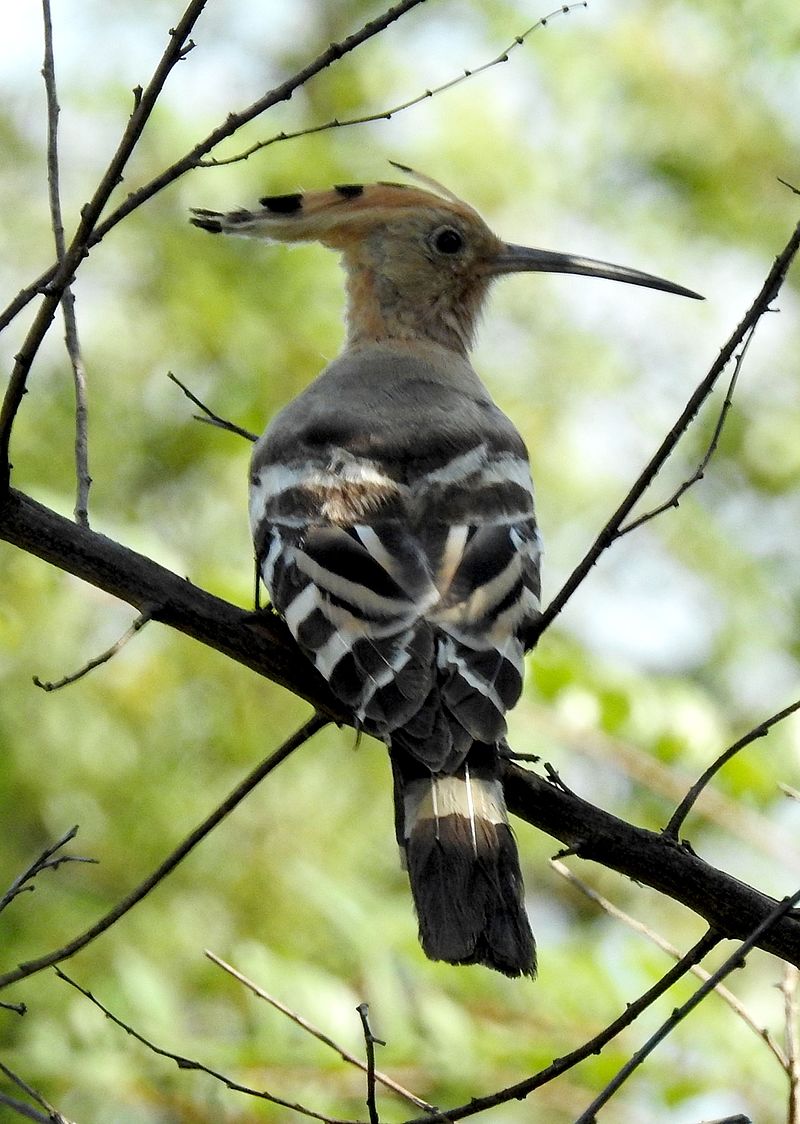 Like many other birds this species has suffered persecution,and especially so in the past. Stevenson wrote," Of all our rarer migratory visitants there is none whose appearance is more regularly noted than the Hoopoe,its singular striking plumage makes the most indifferent observer aware,and unfortunately ,in almost every instance insuring its destruction. Although the annual notices of its persecution,in our local and natural history journals, belie the stereotyped heading of 'rara avis',no specimen is safe for an instant on our inhospitable shores,and many an opportunity of examining the peculiar habits,in the wild state, of this most interesting bird are lost to the naturalist through the greed of collectors"

Although the bird seeks its food in the open country,plains,fields or meadows,it prefers the neighbourhood of trees,and more particularly affects open groves in the vicinity of pasture land. Most of the life of this bird is spend upon the ground,where it struts and nods, almost in the manner of a miniature Crowned Pigeon, feeding entirely upon the insects, their larvae ,pupae, spiders and other invertebrates.

The flight of the Hoopoe is buoyant and undulating,but,excepting during migration, is not long sustained. It consists chiefly of short excursions along a track or roadside from one tree to another. The call to its mate,from which it takes its common name has been variously rendered as 'hoop,hoop,hoop' and a soft 'pou pou'. The scolding note is a harsh rattling Krrrrr and the alarm note of the young,as with many species which nest in holes, is a loud hiss.

The Hoopoe is fond of dusting its feathers in sandy roads probably to get rid of the fleas who persecute them especially in their nesting holes.{see breeding below}

In days gone by the bird received a bad name in Scandinavia and its appearance is, by the country people,supposed to forbode war and hard times,and from this derived the Swedish name Hurfogel,which literally means 'army bird'. IN china it was referred to as the 'Coffin bird'.

Cannon Tristram writes in his ' Natural History of the Bible'-" Few birds have had more absurd fables attached to them than the Hoopoe. The Arabs have a superstitious reverence for it ,and believing it to possess marvelous medical qualities,they call it the 'Doctor bird'. Its head is an indispensable ingredient in all their charms and in the practice of witchcraft. They also believe it listens to whispers and betrays secrets,and what is far more important, that it has the power to detect water and of pointing out hidden wells and springs."

" These attributes have doubtless suggested by the quaint and grotesque movements of its head and tall crest,which it erects in walking,and then, with a solemn portentous look,it bends its head down till the bill touches the ground. The Greeks and Romans had equally absurd superstitions respecting the Hoopoe. It is considered a filthy feeder,chiefly from its habit of resorting to dung hill, which it probes assiduously with its long delicate bill in search of small insects. It is probably from its 'filthy' habit and resorts,as well as from the superstitious reverence in which it is held by the Egyptians, that it was equally enumerated among the unclean animals in the Mosaic Law ".

The habits of the Hoopoe were recorded by Naumann which was translated as follows. " It is a cautious bird and shy flying away on the approach of man,even when living unnoticed and unmolested near human habitations.. It is more timid than cautious,and its nervous frightened manner may be observed by anyone. Even a Swallow flying over it frightens it,and it starts and spreads its crest, but closes it again as soon as it sees no danger. If a pigeon or any other larger bird,passes over it, it takes refuge directly in some near tree, or should a bird of prey,or even a Crow,appear when it is running about,it drops immediately on the ground,spreads its wings and tail wide out,so far that the points of the wings almost touch. Throws back its head and sticks up its beak,and the banded wings and tail surround it,like the petals of a flower. So long as danger threatens,it remains in this position,probably to deceive its enemies,for when spread out the Hoopoe looks as Bechstein,remarks,more like an old party-coloured rag than a living bird" 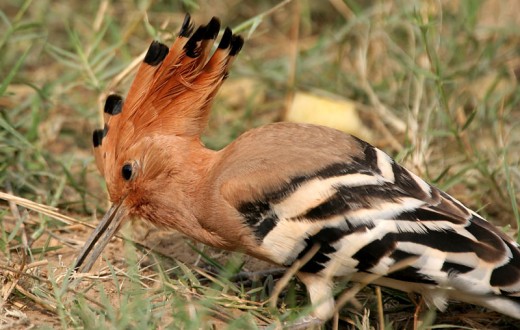 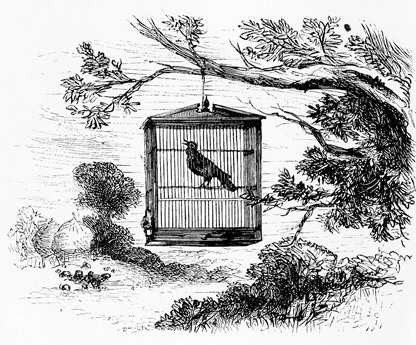 In the days before it became illegal to keep wild birds in captivity { with a few licensed exceptions} Bird catchers made a good living from procuring birds by any means {usually by nets} and selling them to bird keepers and to the markets as food. as this was an important part of our avian history the following few paragraphs allude to this time.

Butler,relates that-" As a cage bird the Hoopoe is tolerably well known and it usually pleases its owner,by its tameness. The best food for it consists largely of soaked ants cocoons,supplemented by meal worms, spiders ,insects of all kinds and earthworms. Unfortunately the birds habit of tapping on the earth tends to split the bill,thus rendering it unable to pick up its food and so producing death by starvation. An aviary with beds earth and a thick layer of sand over the remainder of the floor would therefore be most suitable for this species."

Lord Lilford, writes -" In most cases the beauty and conspicuous plumage of this bird,to say of nothing of its tameness,leads to its immediate destruction by the first armed idler that sees it ,as the senseless craving for British killed specimens induce bird stuffers to give long price for any {so called} rarities,and causes murder of many harmless and ornamental species besides the subject of this protest"

Yarrell,leaves us this insight about a captive bird. " This bird is quite tame,and when unexcited,the high crest falls flat over its head and covers the octiput. It takes meal worms readily from the hand,nibbles and pinches it between the end of the mandibles,then putting it on the ground,strikes it several times with the point of its beak. When the insect is apparently dead or disabled it is again taken up,and by a particular motion of the head,which is thrown backward ,and the beak opened,the meal worm drops into the gape of the mouth and is swallowed. He hides superfluous food and resorts to his hoard when hungry"

" When allowed to come out of his cage,he takes short flights around the room,but would not be considered a bird of great power on the wing. At the moment of settling on the floor of the room,Mr Barlett's bird bends the head downwards until the point of the beak touches the floor,after which, as well as occasionally at other times, the long feathers forming the crest are alternately elevated and depressed in a slow and graceful manner, the bird assumes all appearance of great vicacity,running on the ground with a very quick step"

Eggs of the hoopoe. 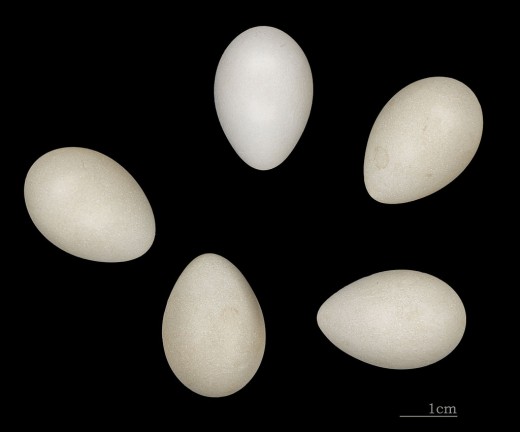 Coward ,1907, describes how he watched a male chasing a female round the island of a pool,in and out,among the tops of the adjacent beech trees,uttering the while a loud clear whistle not unlike that of the common sandpiper. During these evolutions the male bird several times perched for some seconds in the upper branches of a tree.

This species begins its breeding operations in May,usually seeking a hole in a decayed ash or willow tree as a location for the nest.However, it will select a crevice in a rock, wall or even a cave.The nest itself is usually slight,but sometimes consists of a good many twigs, straws, grasses, rootlets and feathers. rarely no materials of the usual kind,but invariably a plastering of foul smelling odour upon which the eggs are laid. Nor does the bird remove any droppings so the stench tends to build up,and the eggs which at first are white or bluish white, become quickly soiled and stained a yellowish colour

It was known on several parts of the Continent by the name of Stink bird. Von Oken stated-" that the smell arises from the dung of nestling's not being removed,and from Cow dung being used in the construction of the nest. "

The eggs are incubated by the female for about 15-16 days and are ready to leave the nest in a further 26-29 days. After the young leave the nest they remain within the vicinity and are taken care of by their parents.

While in the nest the young are covered by a long greyish coloured down and the bill is very short and straight, the breast is crossed with narrow dusky streaks.Young birds in the nest make a hissing noise when they are disturbed or alarmed. Immature birds have a similar plumage to the adult but the bill is much shorter. 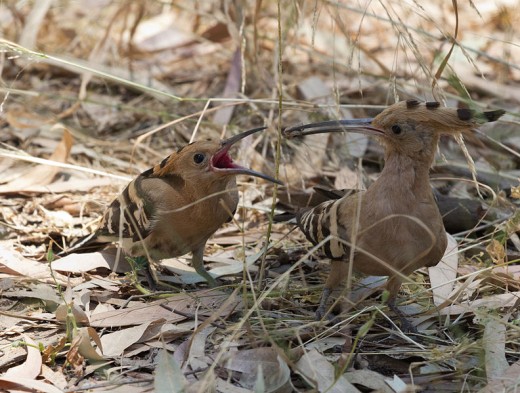