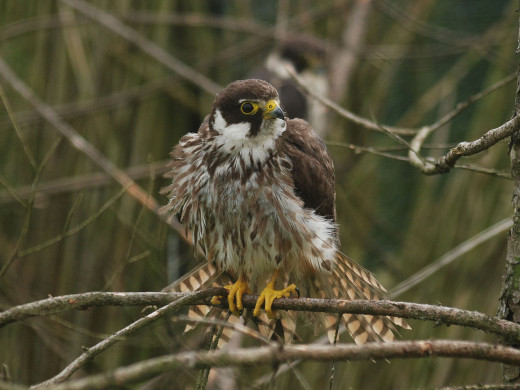 The Hobby belongs to the order of birds known as the Accipitriformes and the family Falconidae within that order. It has been allocated the genus name of Falco from the Latin Falcis=a sickle.a reference to the hooked talons. The specific name subbuteo also derives from Latin sub-indicating under+ buteo =hawk.

In the UK it is placed on the Green list of conservation concern {no current concerns} and is classed as a migrant breeder and passage visitor. the estimated population is 2.800 pairs in summer. {Source BTO}

The bird breeds in Eurasia and winters south Eurasia and Africa.The Gaelic name for the bird is Gormag. The Welsh Hebog yr Ehedydd and the Irish Fabhc n Coille.

Falcons make up about 37 species in the genus Falco. These raptors occur on all continents of the world with the exception of Antarctica.

They have thin tapered wings enable them to fly at high speeds and to change direction rapidly. The The Falco is the largest genus in the Falconinae and the sub-family of Falocnidae. These birds kill with their beaks,unlike hawks and eagles and other birds of prey which use their feet. Peregrine **falcons have been recorded plummeting at speeds of 200 mph. Other falcons include the Gyrfalcon the Lanner falcon and the Merlin.

Some small falcons with long narrow wings are referred to as 'Hobbies', while some which hover while hunting are referred to as Kestrel's** The name for a male falcon is a tercel {America -tiercel},from the Latin tertius indicating a third,because of an old belief that only one in three eggs produced a male bird. Others believe it is derived from the fact that the male is about one third smaller than the female.The Hobbies and their relatives are elegant species of falcon .Here we review the Hobby Falco subbuteo and as always we commence with a description of the subject under review.

Illustration of the Hobby 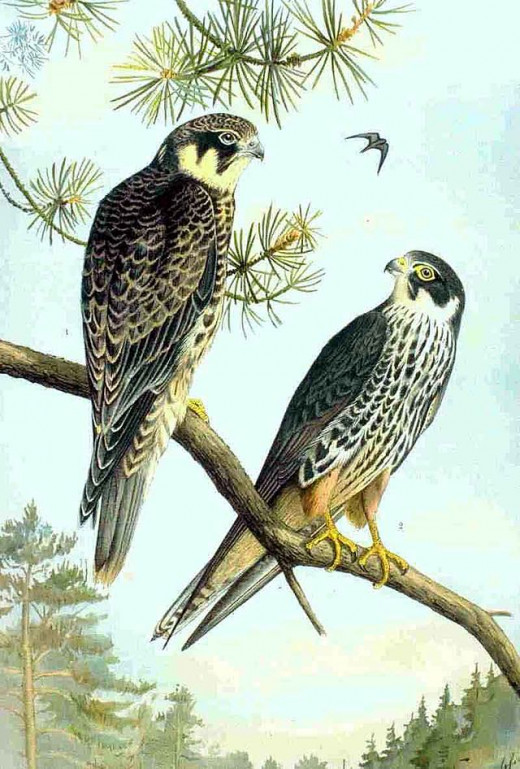 This small falcon may be easily recognized by its long pointed wings,reaching when closed,beyond the point of the tail. When it is seen in the air it has a superficial resemblance to a large Swift. It also resembles in some degree the Peregrine,at least on the back,for the breast is streaked instead of barred. It is also a more slender shape.

The male the upper parts of a general slate colour, the shafts of the feathers being darker. The lower parts are yellowish or rufous white,streaked with dark brown.

The head, large, broad,and flat, of a dark slate colour,crown greyish black, neck,white on the sides,and brownish white or ferruginous on the middle part behind a black streak or band running downwards from the angle of the bill {moustache}. The bill is blackish or bluish black,darkest at the tip,blue at the base. The cere is yellow, irides reddish brown or orange.The nape greyish black, chin and throat white,breast yellowish white streaked with brown. The back a dark slate colour. The wings have quills dusky black with yellowish brown oval spots on the inner webs-the greater and lesser wing coverts are a dark slate colour.

The tail which consists of 12 feathers,and may be up to six inches long,and slightly rounded at the end,is dark brownish-grey, the two middle feathers plain, the others transversely marked with reddish white or yellowish brown The under tail coverts are a bright orange red or ferruginous,with dusky streaks.

The legs are short and feathered about a third of the way down,the feathers on them a deep rufous,and streaked like the under tail coverts,but in extreme age the markings are thought to wear off,and the ground colour alone remains. The toes are reticulated,and at the base of the short webs.

The female -The feathers of the head are margined with brown which probably wears off with age. The neck white on the sides, brownish white or pale white on the middle part behind. The bill same as the male. The throat white, back greyish brown and shafts of a darker hue. The breast reddish white streaked with dark brown. The quills of the wing are brownish black spotted on the inner webs with reddish white. The tail is greyish brown,faintly barred with a darker shade,the under tail coverts,light yellowish brown.

Hobby in flight. This species is an excellent flyer. 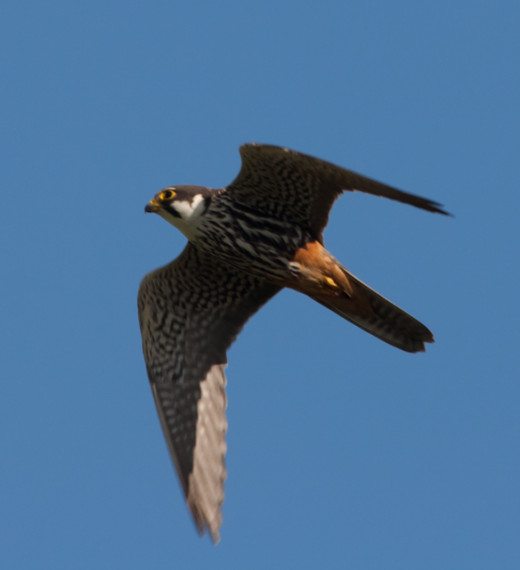 Butler 'British Birds with their Nest and Eggs' 1898,states "The Hobby is a scarce and local summer visitor to our English woodlands from the south,arriving late May,restricted in its distribution,some believe,to the same districts as chosen by the nightingale."

However, Robert Gray considered such evidence of it having nested in the Isle of Arran. Lord Lilford of the same period affirms " That in recent years the Hobby has become more common in Northants stating that " Between the years of 1882 and 1890 inclusive I had positive evidence of the hatching out of no less than ten broods of this species in our district,and sixteen nestlings were brought to me ,without, as far as I know, the destruction of any of the parent birds"

Like many birds of prey the Hobby suffered persecution of Gamekeepers in former times,even though they were perfectly harmless to their charges. One eminent writer records the following notes on the subject-" In a case in south Devon of a Hobby's nest being detected in a wood I prevailed upon the Keeper's to spare the birds,until one day it chanced unfortunately that one came upon three young Hobby's perched together upon a block of granite,and the temptation proved to great, and he fires and killed all three"

A young Hobby shot on Lord Lilford's Estate in south Lancashire {NW England} ,by a keeper,followed his Pointer,when Partridge shooting,for a considerable distance,and kept stopping and striking the dog until he was quite disgusted and came to heel. Lord Lilford termed the Hobby " The most agile and swift of all the falcons of which I am acquainted"

Morris 'A History of Birds' 1907, states that the Hobby is a spirited and daring hawk,and very determined in pursuit of its game,so that it was formerly very esteemed in falconry and used accordingly for flying at small birds"

The Hobby is one of a very few birds capable of out-flying a Swift,with great aerial prowess,so escaped Budgerigars have little chance and are regularly taken by these small but amazingly agile falcons. Their impressive aerial skills and displays are often seen as they spend much of their time in a high soaring flight,almost to high to be seen with the naked eye before plummeting earthwards with closed wings at alarming speed and the wings remain closed until they are within a few feet of the ground. They also pass food to each other in mid air.

They often hunt in the late evening seeking out insects that appear at dusk,as well as on flocks of swallows about to enter reed bed roosts. Because of their aerial skills they are capable of capturing Dragonflies on the wing,indeed most of their food is procured in this manner. They inhabit heaths and woodland edges and farmland in the UK,whilst in Asia and Africa, open country ,bush and savannah are their haunts.

Hobby on the wing is a marvelous sight. 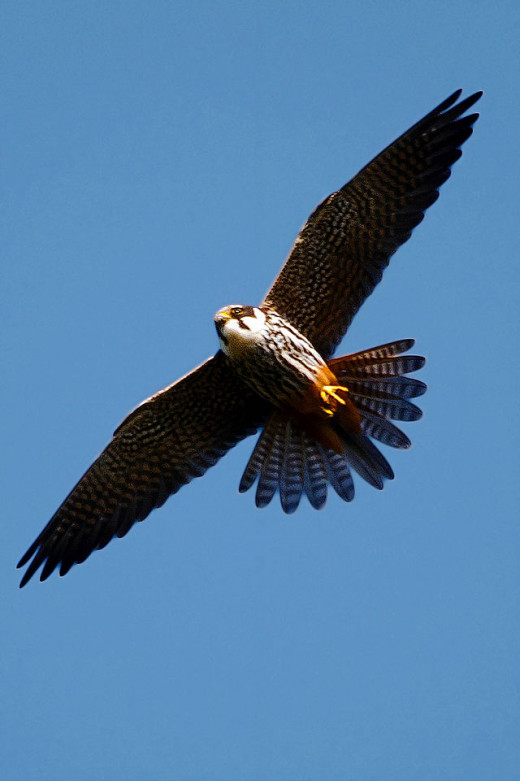 In the days before it as illegal to keep wild birds { with a few licensed exceptions} a good living was procured by Bird-catchers, who sold them to those that kept birds in aviaries or cages or to markets as food,even taxidermists were supplied by them.

However, it was part of our avian history and as such warrants a mention. The following few paragraphs are of historical interest only.

According to Butler {1898} the Hobby becomes a very docile pet in captivity.Lord Lilford on the other hand found it difficult to keep Hobbies alive,and only in one instance did he succeed in doing so through three moults. Saunder's reveals he knew of one that lived for 15 years in captivity.

Morris claims, " It may easily be trained to Falconry and becomes very tame when kept in confinement.It has been known to dash through a window into a room,at a bird in a cage,and will occasionally follow sportsmen and pounce upon the small birds put up by dogs"

Meyer 1842, said this courageous little falcon may be trained to hunt Quails**, Larks and other small birds. " It requires to be carefully kept during the winter ,to protect it from the rigours of the climate,not suited by nature to its delicate frame"

However, in the estimate of former falconers,the Hobby had one great defect, in spite of its marvelous power on the wing, "It was a bad 'footer' ,it lacks the power or will to clutch its prey firmly.This in all events ,has been the case with all the reclaimed birds of this species I have seen,and arises probably from the comparative delicacy and weaknesses of the legs and toes, which are better adapted for the capture of insects than of feathered prey"

The Hobby is a handsome bird. 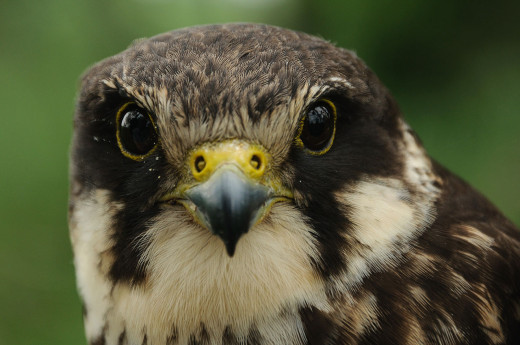 Nest and eggs of the hobby

Hobby's tend not to build nets of their own but utilize old nests of other species such as the crow and other corvids. Females do not normally breed until one or two years of age and males do not breed until they are at least two years old.

Saunder's, {1800's}, conveys the following remarks " Previous to laying the female Hobby is much addicted to brooding on an empty nest, or upon the eggs of the Kestrel,and careful observers, who were unaware of this fact,have been led to believe that a nest,from which the Hobby has been seen to fly,really belonged to that bird,when it did not"

However, as a rule there is little difficulty in discovering the real nest as the Hobby becomes very quarrelsome and pugnacious at the breeding season,its position is often betrayed as the Hobby is often seen chasing and buffeting any Crow, Magpie or Jay that may be passing.

Two to four eggs are deposited by the female with three composing the average clutch. Incubation is undertaken by the female who is occasionally relieved by her mate. The typical egg is a pale ochreous colour,dusted over with minute dark red spots,and with one or two small lines and blotches of red. Other eggs are reddish,spotted with darker red,generally resembling those of the Kestrel.

In a further 30-34 days the young will leave the nest, but continue to be fed by their parents for a few more days. However, it is not long before they begin to capture slow flying insects for themselves,before turning their attention to rapid flyers such as Dragonflies.Eventually they will learn how to catch birds and even bats. They will 'fatten' up before beginning their migration.

After the breeding season the dominant prey will be birds such as Skylarks,Starling,House and Tree sparrows and other small song birds.

The tail as in the female, but the bands are light red,the tips and quills reddish white, beneath is barred with dull white and greyish black.. The lower tail coverts yellowish-white with brown shafts. The legs are yellow,feathers of the legs yellowish white,with oblong brown spots. The claws are black. 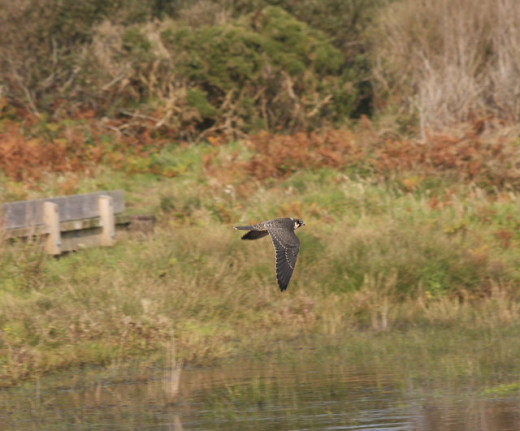