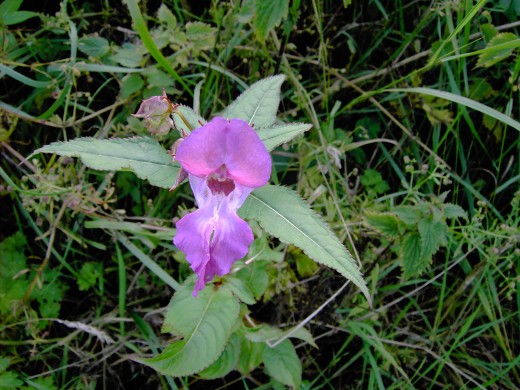 This tall invasive species was introduced to these shores in 1839 as an ornamental species for large gardens. It was regarded as being worthy of being on display at that time at Kew Gardens .As early as 1855 it was classed as being naturalised in southern counties of England. From that point until the present day it has been a subject of debate and has divided opinion among conservationists and wildlife organisations.

It would be prudent at this point to describe the species in some detail for the benefit of readers' not familiar with the species. Himalayan balsam, Impatiens glandulifera produces red tinged succulent stems that may attain the height of 2m tall. The foliage is lance shaped, arranged in whorls of 3-5 leaves. They end in a point and are serrated along their margins

Foliage grow in whorls around the stem. Below the underside of the leaf. 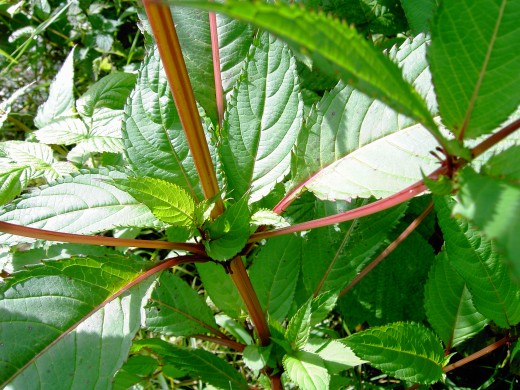 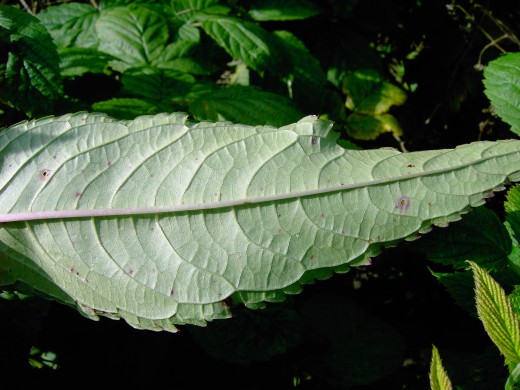 The flowers are produced in loose clusters. They are composed of 2-lipped pendulous flowers. The lower lip is formed of two petals while the upper petal forms a helmet-like hood. {This gives rise to its country title of Policeman's helmet}. Individual flowers are 2.5-4cm long.{One and a quarter -two inches}.

The fruits are a spindle shaped capsule each containing 4-16 seeds. 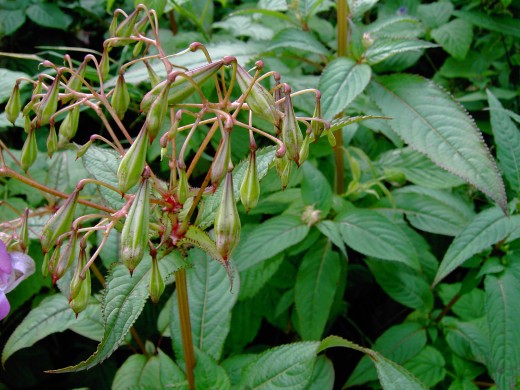 Arguments are rife about the virtues or otherwise of this species. The main argument from many conservationists is the plants invasive ha bit. They are fast growing plants which will tolerate shade {hence will invade woodland}. They prefer moist soil, thus, often get well established along river banks and tenant the banks of streams, however, they will grow on almost any type of soil and therefore not restricted to such situations.

Because they form dense stands thy effectively block out many smaller, slower growing native species , studies have shown this may be as much as 25% in many locations. Beneath their tall numerous stems species diversity is minimal, and, the root system of Himalayan balsam is shallow, thus when the herbage dies down in winter the ground is left bare. to compound this the soil is not bound together as it would be if native plants had become established. This will inevitably lead to corrosion occurring, especially on steep river banks and sloping banks of streams and brooks.

Bees are attracted to the large flowers often at the expense of native species. 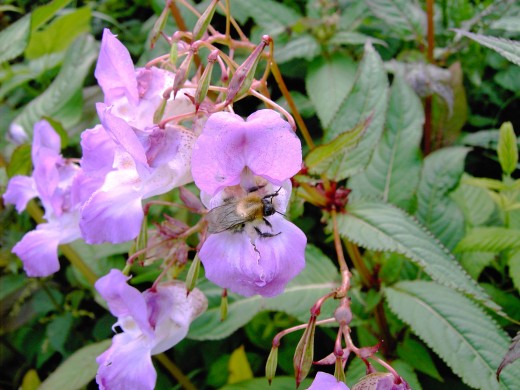 Another issue that concerns conservationists  is that the Himalayan balsam is a prolific nectar producer that attracts bumble bees away from native species hence pollination of the latter is diminished, while those of the former increases thanks to the work of these industrious insects. Again this can lead to less diversity of plant species occurring in any particular area or locality.

Counter arguments contest that Himalayan balsam is replacing many of the perennial, troublesome species such as nettle, bramble and dock

To control the spread of this species one need to know its basic biology. as previously stated the species can gain a strong foothold in a diverse range of habitat including gardens. This annual plant produces seedlings that in the main germinate together in vast numbers the following spring. Once the seedlings have become established they grow at a rapid rate 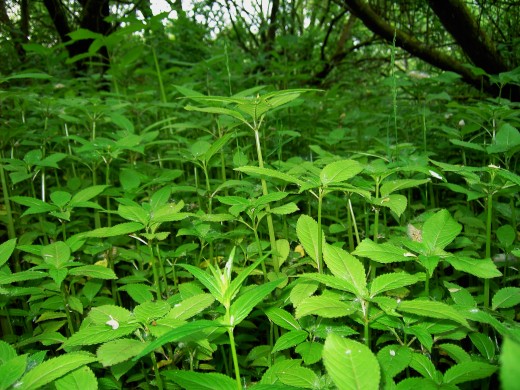 These seed capsules are nearly ready to explode. 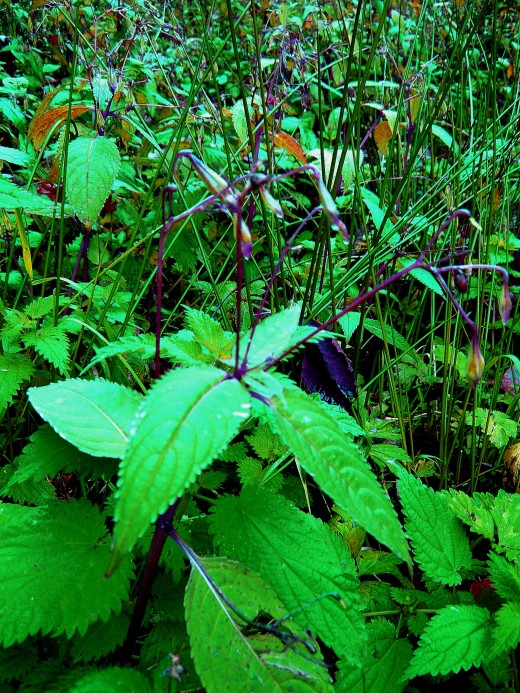 Each plant is capable of producing up to 800 seeds per season. These will germinate readily the following spring. Stand of the Himalayan balsam may contain thousands of plants, so one can appreciate the potential of this invasive species. Armed with this knowledge it is a reasonable assumption that the best way to stop its spread is to cull the

plants before ripe seeds can occur.

Many wildlife and conservation groups including our own West Lancashire Ranger service organise balsam pulling days. Volunteers spend the day pulling up the shallow rooted plants from the ground before the flowers have the chance to produce seeds. However, this is very labour intensive and needs to be meticulously carried out, for one over looked plant will produce enough seed to recolonise the following year.

Studies have revealed that the seeds are only viable for two years, thus the cull has to be carried out throughout this period of time. It is also recommended that the area is monitored for at least five years.

Where stands are extensive herbicide is often the only viable answer to ridding an area of this plant. However, as many stands of this nature occur by water courses herbicide is often not an option. That leaves culling by means of strimmers which can clear large areas with few people needed to complete the task.

However, despite various methods of control being exercised the plant is on a wide scale increase here in West Lancashire where water courses, woodland and ungrazed pastures have all seen colonies become established, and when whether we love them or hate them , there is one irrefutable fact the Himalayan balsam is here to stay. 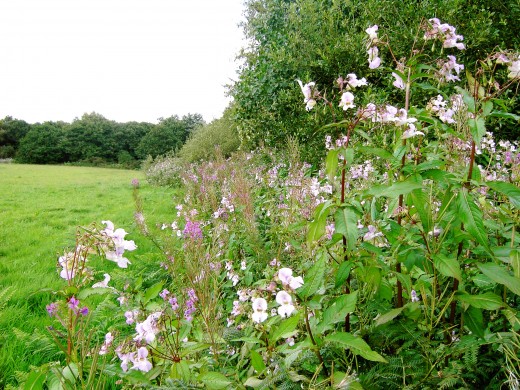 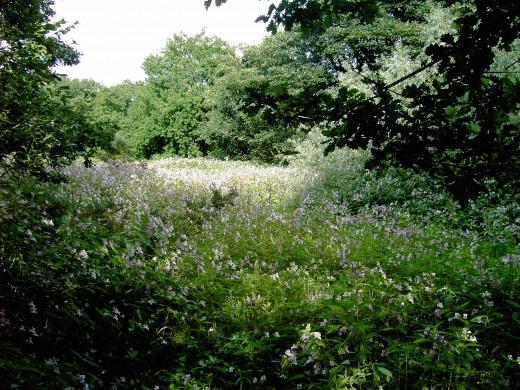